Smilegate announced on July 28th that it has made a strategic investment in 'That`s No Moon Entertainment', a new independent studio led by award-winning, top-selling developers known by fans through their work at PlayStation and on renowned games like The Last of Us, Call of Duty, God of War, Fortnite, Destiny, and others.

Smilegate is the creator of the blockbuster franchises "CROSSFIRE", "Lost Ark", and "Epic Seven", that are hugely beloved in the global market. "CROSSFIRE", launched in 2007, is a first-person shooting game and is currently played in more than 80 countries worldwide by approximately 1 billion gamers. Smilegate's flagship MMORPG "Lost Ark" will be launched in North America and Europe within 2021 with Amazon Games as the publisher. Smilegate is steadily solidifying its position as a 'Global IP powerhouse'.

That's No Moon is a groundbreaking new AAA game development studio founded in 2021 focused on industry defining narrative-driven entertainment that will push the limits of both gameplay and story. Based in the epicenters of AAA gaming and film, Los Angeles and San Diego , That's No Moon supports a culture of excellence, diversity, respect and innovation. That's No Moon reunites prolific, award-winning leaders Michael Mumbauer , Taylor Kurosaki , Jacob Minkoff , Barry Genova , Tina Kowalewski and Nick Kononelos - key developers of blockbuster franchises "Uncharted", "The Last of Us", "Destiny" and "Call of Duty: Modern Warfare" - ushering in a brand new era of Next Generation Cinematic Adventures and creating bold new experiences for gamers worldwide.

Smilegate and That's No Moon are developing a new AAA narrative-driven game in the action-adventure genre. This new game will impress game fans with a totally new and innovative single-player experience for consoles and PC. To this end, That's No Moon is expanding the staff of its current studio and is in pre-production on its debut project.

Harold Kim , VP of business development at Smilegate said, "That's No Moon is a studio with exceptionally talented developers. I believe Smilegate's investment will blossom a groundbreaking title that will be something that no one has ever experienced before, capturing the game fans of both East and West."

Michael Mumbauer , CEO of That's No Moon said, "We are so proud and honored to be partnering with Smilegate on our first title, a story-driven game that will bring key innovation to the genre. We have a shared vision of creating world-class games that feature captivating stories and characters that resonate with players around the world."

Besides the investment in That's No Moon, Smilegate recently announced that "Lost Ark" will enter the North American and European markets with Amazon Games. Smilegate is also preparing to release "CrossfireX", a console version of CROSSFIRE, and is actively targeting the Western market.

Smilegate Entertainment is a global game development and publishing company headquartered in South Korea with regional offices in the United States , China , and Europe . Its flagship franchise 'CROSSFIRE,' is one of the largest and most successful franchises in gaming history with more than 670 million registered users to-date and over 8 million concurrent players globally. Its latest project, 'Lost Ark,' is an MMORPG that was released to wide acclaim and is expected to launch in North America and Europe in 2021. Learn more by visiting Smilegate.com

About That's No Moon Entertainment Inc.

That's No Moon Entertainment is an independent AAA game development studio and transmedia company established in 2021 by veterans of some of the most recognizable and critically acclaimed creative teams in the world, including Naughty Dog, Infinity Ward, Sony's Santa Monica Studio, Bungie, PlayStation, Epic, and more. With studios based in Los Angeles and San Diego , That's No Moon Entertainment is creating the next-generation of narrative-driven, genre-defining experiences built upon a culture of creativity, collaboration, responsible production practices, and individual empowerment. We are assembling a diverse team of passionate developers of a wide range of experience levels and backgrounds to help shape the future of our studio and projects. See all of our open positions and get in touch by visiting ThatsNoMoon.com.

The U.S. gaming population expanded by 3% from 2019 to 2022, as 9 million new gamers aged 13 to 64 entered the market, according to a new Consumer Technology Association (CTA)® study . The active gaming population in this age range now totals 164 million, representing 73% of 224 million U.S. adults and adolescents.

LootMogul announced that an agreement has been made for Hoop Culture Inc. to acquire the naming rights for the Metaverse Arena in Orlando .

The terms of the deal also include an agreement for Hoop Culture to place five retail/experiential stores in five Arenas within the LootMogul Metaverse.

"We have been receiving a high number of inquiries for naming rights in our Sports Metaverse, and penning this agreement with Hoop Culture, one of the fastest growing apparel brands, is phenomenal.

Our goal is to onboard all major brands in our sports metaverse, convert their web 2 consumers to web 3 and vice-versa; essentially create a whole new revenue stream in the metaverse for all brands," stated Raj Rajkotia, LootMogul CEO.

"To obtain the naming rights for the Orlando Arena is a tremendous day in the continued growth of Hoop Culture," said Mike Brown , President of Hoop Culture.

"Having Hoop Culture stores in five LootMogul Metaverse Arenas will continue to expand our brand and place us in front of hundreds of millions of potential customers. Game players will be able to represent the Hoop Culture brand within the Metaverse and purchase physical products that will be sent directly to the customer. Truly a game changer," added Brown.

LootMogul is an athlete-led sports metaverse (web3 platform) that is powered by virtual real estate, training academies, blockchain games, metashops for brands and athletes with in-real-life (IRL) rewards. LootMogul is expanding the web3 community by bringing web2 gamers and sports fanatics to the metaverse. LootMogul is building more than 180 sports cities across the globe with real-world utilities and benefits.

Hoop Culture is the premier, one-stop store for copping unique basketball accessories; the forerunner of the independent street and lifestyle apparel, setting trends with each and every new arrival. Hoop Culture currently sells products in 38 countries around the world, and maintains a vast social media network of over 150 million impressions a month.

NFT battle game Versus which features an Animal-Crossing-inspired open-world multiplayer metaverse, is adding Concordium to its ecosystem allowing players to explore unique arenas in collaboration with major brands.

At present, NFT minting and changing ownership transactions for the Versus metaverse are executed on Ethereum Mainnet, while a Layer-2 takes care of "mini-transactions" such as playing a game or training a pet. Compared to Ethereum's current steep gas prices, Concordium offers cheap, fixed and predictable fees for players and is a safer bet for Versus.

Accelerating the buildout of real-time cloud rendering ecosystem, Well-Link Technologies raises $40 million in Series B2 financing round led by Temasek

Founded in 2019, Well-Link has completed 5 rounds of financing in 3 years and has developed into the world's leading provider of real-time cloud rendering solutions. At a time when the global capital market is exercising cautiousness and hesitation, Well-Link successfully completes another round, thanks to its industry-leading solutions and forward-looking strategies.

- KLab Inc., a leader in online mobile games, announced that its head-to-head football simulation game Captain Tsubasa: Dream Team will celebrate the one year anniversary of NEXT DREAM, the original story by the author of "Captain Tsubasa" Yoichi Takahashi . See the original press release ( https:www.klab.comenpress ) for more information. 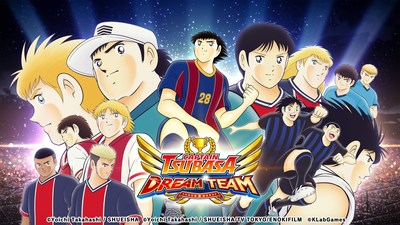 The story takes place after the Madrid Olympics in Captain Tsubasa Rising Sun , currently being serialized in the Grand Jump special edition Captain Tsubasa Magazine (Shueisha). It highlights the appearances of familiar characters in new roles and brand new characters every month in the game.

There will be various in-game campaigns in celebration of the NEXT DREAM 1st anniversary including login bonuses, daily scenarios, event missions, special Transfers, and much more. Be sure to see the in-game notifications and official website for details.

The round also comes with backing from major games and guilds, most notably YGG

The Kapital DAO announced today the close of its latest raise, with participation from Polygon Ventures, the Algorand Foundation, and the HBAR Foundation, with grants from the Solana Foundation and NEAR. Also involved were prominent investors such as Yield Guild Games (YGG), Samsung NEXT, GSR, Wintermute Ventures, Keyrock, and Portofino. Gaming strategic partners include Splinterlands, Shrapnel, and Blocklords. The Kapital DAO will also receive ongoing advisory from YGG and Floating Point Group (FPG) along with the leaders of Illuvium, Laguna Games, and Digital Insight Games (DIG). The DAO is expected to vote to drive the funding toward further development and scaling of its technology, which enables institutional-grade asset management for web3 gaming organizations. The Kapital DAO plans to deploy its technology closely with these strategic partners to increase the amount of institutional capital and players flowing through partnered ecosystems. This raise comes at a critical juncture as web3 gaming and large DAOs begin to focus on their key issues with scaling operations and security.