Full year EBITDA 1 growth of 327%, net loss of $6.3 million , gross profit margin improvement to 57.5%, and a 125% increase in cash generated by operating activities

(All figures in US dollars, unless otherwise indicated)

"2020 was a foundational year for PopReach; we got listed, refinanced our debt with a growth oriented Schedule I bank, secured a strategic investment from Alibaba's global investment arm, capitalized the business with an oversubscribed bought deal, and successfully built out our M&A pipeline" said Jon Walsh , Co-founder and CEO of PopReach.  "In the past five weeks we've closed two pivotal transactions; our acquisition of Peak, for which we paid approximately one times trailing twelve month revenue, and an asset purchase and licensing deal that will see PopReach launch the mobile version of the incredibly popular PAYDAY first person shooter franchise.  With a strong pipeline of acquisition opportunities and significant updates planned around our key franchises, we are excited about our growth prospects, and are committed to delivering sustainable value for our stakeholders."

"PopReach delivered record results in 2020, with significant improvements to EBITDA, Adjusted EBITDA, and cash generated by operating activities, thanks to the successful execution of two pillars of our playbook; operating cost reductions, and stabilization of our franchises. Our focus in 2021 are investments in our key franchises to increase player retention and monetization, positioning the Company for organic growth in the back half of the year" said Christopher Locke , Co-founder and President of PopReach. "In Q4, we made the right decision to delay paid user acquisition marketing due to short term and highly inflated costs stemming from Apple's announcement regarding IDFA (Identifier for Advertisers); these increased costs drove a negative ROI on user acquisition spend in the context of our portfolio, and we decided to prioritize EBITDA growth over short term revenue gains. As such, we shifted our capital allocation in favour of much higher returning investments in game improvements and acquisitions."

Below is selected quarterly information from the Company's consolidated financial statements for each of the quarterly periods indicated. The Company's functional and presentation currency is US Dollars. Except where indicated, the following financial data is reported in accordance with IFRS.

Management will host a conference call on Tuesday, April 20, 2021 at 8:30 am ET to discuss these fourth quarter and fiscal year 2020 results.

The Company prepares its financial statements in accordance with IFRS. However, the Company considers certain non-GAAP financial measures as useful additional information to assess its financial performance. These measures, which it believes are widely used by investors, securities analysts and other interested parties to evaluate its performance, do not have a standardized meaning prescribed by GAAP and therefore may not be comparable to similarly titled measures presented by other publicly traded companies, nor should they be construed as an alternative to financial measures determined in accordance with IFRS. Non-GAAP measures include "Bookings", "EBITDA" and "Adjusted EBITDA".

Earnings before interest, taxes, depreciation and amortization ("EBITDA") and consolidated adjusted earnings before interest, taxes, depreciation and amortization ("Adjusted EBITDA") are non-IFRS measures of financial performance. The presentation of these non-IFRS financial measures is not intended to be considered in isolation from, as a substitute for, or superior to, the financial information prepared and presented in accordance with IFRS, and may be different from non-IFRS financial measures used by other companies. Company management defines EBITDA as follows:  IFRS Net income (loss) adding back accretion and interest expenses (including amortization of deferred financing fees), income taxes, amortization, gain/loss on disposal of assets, and fair value gain/loss on financial liabilities.  Adjusted EBITDA is calculated as EBITDA and excludes discontinued operations and the effects of significant items of income and expenditure which may have an impact on the quality of earnings, such as restructuring costs, legal expenses, and impairments where the impairment is the result of an isolated, non-recurring event. It also excludes the effects of equity-settled share-based payments, and changes in deferred revenues.

Management believes EBITDA and Adjusted EBITDA are useful financial metrics to assess its operating performance on a cash basis before the impact of non-cash items.

The following table presents the Company's calculation of EBITDA and Adjusted EBITDA for each period:

The increase in Adjusted EBITDA for the year ended December 31, 2020 compared to the year ended December 31, 2019 was largely related to the successful execution of operating cost reductions, as mentioned in the "Summary of Significant Developments" in the MD&A, as well as lower research and development salaries and benefits expenses as a result of a restructuring at PopReach Technologies Private Limited ("PR Tech"), in Bangalore, India in Q4 of 2019.

Decreases in amortization was due to the impairment charge recorded in Q4 2019, relating to certain advertising engines that the RockYou Acquisition seller was operating that were shut down due to the seller's bankruptcy, resulting in lower actual revenues compared to forecasted revenues during the year. As a result of the impairment charge, the carrying values of the intangible assets were decreased, resulting in a lower amortization per period moving forward. Increases in interest and accretion expenses were due to the increase in convertible debt during the first half of 2020.

Bookings is a non-GAAP financial measure that is equal to revenue recognized plus or minus the change in deferred revenue during the period. The following table is the reconciliation from revenue to bookings for each period:

The decrease in bookings for the three months ended December 31, 2020 compared to the three months ended December 31, 2019 was due to COVID-19 related delays in the launch of growth game features designed to increase engagement and monetization, delayed content updates and bug fixes relating to the live operations of the Company's entire portfolio of games, and the delay of planned new user growth marketing initiatives due to inflated user acquisition costs resulting from Apple's IDFA policy change, as mentioned in the "Summary of Significant Developments" in the MD&A.

PopReach, a Tier 1 Issuer on the TSX Venture Exchange, with shares also trading on OTCQX® Best Market, is a free-to-play game publisher focused on acquiring and optimizing proven franchises. The Company has to date acquired 14 successful franchises enjoyed by over 1.9 million unique players a month, including Smurfs' Village (IP under license), PAYDAY Crime War (IP under license), Peak - Brain Training, Kitchen Scramble , Gardens of Time , City Girl Life , War of Nations and Kingdoms of Camelot . PopReach, headquartered in Toronto , employs a team of over 125 experts in Toronto , Vancouver , London, UK , and Bangalore, India .

Additional information about the Company is available at www.sedar.com

Diablo® Immortal ™ to Hit Chinese Market on June 23 , With Over 15 Million Players Already Pre-Registered in China

Advokate Group a global leader in blockchain technologies, today announced the release of its own native wallet in preparation for the launch of its premier experience-to-earn metaverse, MetaGaia . The MetaGaia Wallet will be used to hold users' $METG, a native token for the MetaGaia metaverse.

- GIGABYTE Technology announced today its newly developed AORUS Project Stealth computer assembly kit, a revolutionary product that features a customized combo of motherboard, graphics card, and PC case. The Project Stealth is designed to eliminate the pain points of cable clutters, obstacles to installation, and obstructed airflow with a sleek header design, making PC building an easy task and the overall experience a pleasant one. 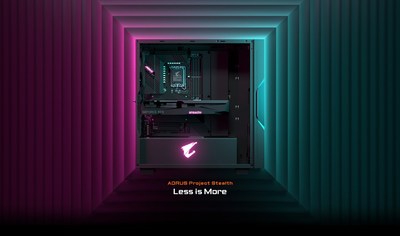 Whether you are a beginner or an experienced user in PC building, many often find the building process frustrating when connecting various cables within a limited space. While others may also struggle with cable management. To improve the PC building experience, GIGABYTE developed the Project Stealth computer assembly kit, an ingenious solution that consists of a Z690 AORUS ELITE STEALTH motherboard and an RTX 3070 GAMING OC STEALTH graphics card pre-installed in an AORUS C300G STEALTH case. Through some smart re-engineering, the Project Stealth minimizes the need for cable connection and cable management. It ultimately simplifies the building process while keeping the case interior clutter-free for a much-enhanced airflow with sleek and cleaner aesthetics.

In addition to optimizing the PC building experience, AORUS Project Stealth is designed to perform. The computer assembly kit centers around the Z690 AORUS ELITE STEALTH motherboard, which supports the latest Intel 12th-gen processors for delivering enormous processing power. Paired with the WINDFORCE-cooled RTX 3070 GAMING OC STEALTH graphics card, the Project Stealth provides an ultimate gaming platform ready for those who are looking to build a high-end gaming PC.

Esports Entertainment Group, Inc. (NASDAQ: GMBL) (NASDAQ: GMBLW) (or the "Company") today announced the appointment of Kaitesi Munroe to the Company's Board of Directors. Ms. Munroe satisfies the criteria for independent directors for the purposes of Nasdaq rules and applicable Securities and Exchange Commission requirements. Her appointment will bring the size of the Board to eight members.

"We are excited to further strengthen and diversify our Board of Directors through the appointment of Kaitesi Munroe, and I am delighted to welcome her to the Company," said Grant Johnson, Chairman and CEO of Esports Entertainment Group. "Her extensive knowledge and experience with legislative matters and government affairs will be of critical importance as we expand our iGaming footprint and establish ourselves as the leading provider of technology solutions to the fast-growing and exciting world of real money esports wagering. I am confident that Kaitesi's background makes her a great addition to the Board of Directors, and we are looking forward to benefiting from her perspective."

Dignitas has announced Nicolas "Nick" Marrone as the new head coach of their Rocket League team.

Most recently, Nick was the head coach of Team Queso. Under Nick's tenure, Queso saw an incredible boom in their competitive results. After finishing 9th in the RLCS Fall split, Queso burst onto the scene in the Winter Split and won two of the three regional events as well as a 2nd place finish at the Major.

GoNoodle and Special Olympics Will Come Together to Help Educators Communicate Inclusivity and Belonging Through New Content and Educational Resources for Students, Educators, and Parents

GoNoodle has partnered with Special Olympics to help share the values, principles, and experiences of Special Olympics athletes with children across the country through new content, resources, and tools to help shape a generation that supports inclusivity for all. The aligned mission, to celebrate the limitless potential of individuals with intellectual disabilities and the power of movement to bring people together and, ultimately, transform lives speaks to the heart of both organizations. As Special Olympics athletes across the country get ready for the 2022 Special Olympics USA Games, kicking off on June 5th in Orlando, FL classrooms and families can use the resources to come together to learn and play, using the new series, "High 5, Champ."