Norden Crown Metals Corp. is pleased to announce the commencement of surface exploration at its 100% owned Gumsberg Project, located in the precious and base metal rich Bergslagen Province of southern Sweden .  The objective of the surface exploration is to enhance existing exploration drilling targets through mapping, sampling, and airborne geophysics at the Fredriksson Gruva target a Broken Hill Type …

“Surface exploration work at Gumsberg will focus on expanding the current footprint of silver rich based metal mineralization at Fredriksson Gruva”. Stated Patricio Varas , President and CEO of Norden Crown . “Broken Hill Type deposits have the potential to yield large tonnages from comparatively small drill footprints due to the high density of the mineralization, so we are conducting detailed geological mapping and tightly spaced airborne magnetic geophysics to delineate mineralization in advance of additional diamond drilling.”

*Insufficient drilling has been completed to definitively determine true thickness; true thickness is estimated to be between 90-95% for holes GUM-20-09 to GUM-20-11 based on angle to core axis and 3D interpretation. 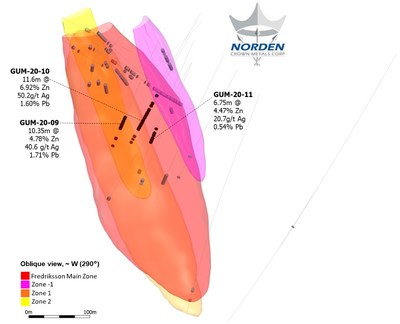 The 2021 Gumsberg surface exploration program will focus mainly on expanding the footprint of BHT mineralization intercepted below the Fredriksson Gruva historical mine workings in March 2021 (see Norden Crown news release dated March 1, 2021).  Geological mapping, sampling, and prospecting will be conducted in the vicinity of Fredriksson Gruva in advance of a high resolution airborn e (UAV) magnetic geophysical survey which will be used to trace mineralization in the subsurface.  Precious metal enriched based metal mineralization at Fredriksson Gruva is spatially associated with a broader horizon of highly magnetic iron and manganese-rich chemical sedimentary rocks. This thick magnetic sequence is geologically and geophysically distinctive and can be modeled in three dimensions using detailed magnetic data.  The surface and subsurface mapping efforts will increase the confidence in the existing drill targets at Frederickson Gruva and allow the Company to gain insight into the prospects’ size potential .

BHT deposits constitute some of the largest and highest-grade ore deposits in the world 1 . The namesake deposit, Broken Hill, is in Western Australia and represents the largest known accumulation of Ag, Zn, and Pb on Earth 1 .   BHT deposits constitute a distinctive type of stratiform, sediment hosted silver-zinc-lead mineral deposits.  They are characterized and distinguished from other silver-zinc-lead deposits by the chemistry of the sediment that host them and that they are usually associated spatially and temporally with volcanism.

Characteristic features of these types of deposits include: 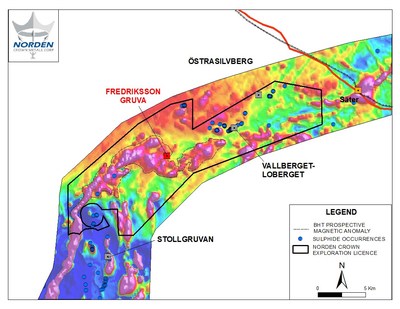 A spatial relationship with continental rifts and an association with magnetite iron formations is considered important to the genesis of BHT deposits and can be used to vector toward additional BHT mineralization along the +21 kilometre belt of prospective host rocks (see Figure 2).  In addition, the association of manganiferous garnets (spessartine) and anomalous base metals in these deposit types will be used to help to evaluate the numerous prospective iron formations in the belt for their potential to host BHT deposits.

References to other Mines and Deposits

References to other mines and deposits made in this news release provide context for the Fredriksson Gruva and Gumsberg Project, which occurs in a similar geologic setting, but this is not necessarily indicative that the projects host similar grades and tonnages of mineralization.

Patricio Varas , P.Geo, a Qualified Person as defined by National Instrument 43-101 Standards of Disclosure for Mineral Projects , has read and approved all technical and scientific information contained in this news release.

This news release contains certain statements that may be deemed “forward–looking statements”.  Forward–looking statements are statements that are not historical facts and are generally, but not always, identified by the words “expects”, “plans”, “anticipates”, “believes”, “intends”, “estimates”, “projects”, “potential” and similar expressions, or that events or conditions “will”, “would”, “may”, “could” or “should” occur.  Forward-looking statements may include, without limitation, statements relating to future outlook and anticipated events, such as the successful completion of the by the Company. surface exploration program on the Gumsberg Project or that such exploration program will result in an expansion of the current footprint of the mineralization Although Norden Crown believes the expectations expressed in such forward–looking statements are based on reasonable assumptions, such statements are not guarantees of future performance, are subject to risks and uncertainties, and actual results or realities may differ materially from those in the forward–looking statements.  Such material risks and uncertainties include, but are not limited to, Norden Crown’s ability to raise sufficient capital to maintain its mineral tenures and concessions in good standing, to conduct its exploration program on the Gumsberg Project as currently contemplated, to repay its debt and for general working capital purposes; changes in economic conditions or financial markets; the ability of Norden Crown to obtain the necessary permits and consents required to explore, drill and develop the projects and if obtained, to obtain such permits and consents in a timely fashion relative to Norden Crown plans and business objectives for the projects; the general ability of Norden Crown to drill test its projects and find mineral resources; if any mineral resources are discovered or acquired, the Company’s ability to monetize any such mineral resources; and changes in environmental and other laws or regulations that could have an impact on the Company’s operations. Forward–looking statements are based on the reasonable beliefs, estimates and opinions of Norden Crown management on the date the statements are made. Except as required by law, Norden Crown undertakes no obligation to update these forward–looking statements in the event that management’s beliefs, estimates or opinions, or other factors, should change.