Denison Mines Corp. ("Denison" or the "Company") (TSX: DML) (NYSE American: DNN) is pleased to announce the substantial completion of extensive metallurgical test work to define the mechanical components for the planned Phoenix processing plant (the "Phoenix Plant"), as part of the Feasibility Study ("FS") underway for the Company's 95% owned Wheeler River project ("Wheeler River" or the "Project").  In addition, the metallurgical program has confirmed the ability to produce a yellowcake product that meets industry standard ASTM C967-13 specifications (see below for details). View PDF Version

Metallurgical test work intended to define the mechanical components for the Phoenix Plant was initiated in April 2021 at the Saskatchewan Research Council ("SRC") laboratories in Saskatoon.  The test work consisted of bench-scale lab tests using uranium bearing solution ("UBS") that was previously produced from lab-scale leaching of core samples from the Phoenix deposit.  These samples are intended to be representative of what is expected to be recovered from the In-Situ Recovery ("ISR") wellfield planned for the Phoenix deposit (see news release dated August 4 , 2021).

Kevin Himbeault , Denison's Vice President of Plant Operations & Regulatory Affairs, commented, " T he comprehensive test work undertaken by the Deniso n team has demonstrated our ability to produce (i) a saleable uranium product utilizing a simplified chemical precipitation process and (ii) high - quality effluent for final discharge to the environment . This is a significant milestone from which we can continue to optimiz e the designs for the Phoenix Plant and further our de-risking of the overall Project as part of the FS."

The results of the metallurgical test work are highlighted by the following:

Additionally, the metallurgical test program has provided several important inputs for the FS processes underway in relation to the planned Phoenix Plant and ISR operation, including confirmation of the following:

Additionally, extensive test work has been completed in defining any potential elements of concern, required process components, reagents, and general operating parameters necessary to mitigate processing risks and ensure the production of a yellowcake product that meets industry standards. This has allowed for the significant progression of the plant and process designs for the FS.

The laboratory work for the 2022 Metallurgical Program to support the feasibility study is being carried out at the SRC Mineral Processing and Geoanalytical Laboratories in Saskatoon, under the supervision of Wood Canada Limited (see news release dated September 22, 2021 ).

ASTM C967-13 is a set of quality specifications applied to uranium ore concentrate that are generally recognized in the uranium industry for meeting requirements for refining and conversion to uranium hexafluoride and, therefore, a saleable product. Parties may, however, agree to less or more stringent specifications of product quality on a case by case basis.

A PFS was completed for Wheeler River in 2018, considering the potential economic merit of developing the Phoenix deposit as an ISR operation and the Gryphon deposit as a conventional underground mining operation. Taken together, the P roject is estimated to have mine production of 109.4 million pounds U 3 O 8 over a 14-year mine life, with a base case pre-tax NPV of $1.31 billion (8% discount rate), Internal Rate of Return ( " IRR " ) of 38.7%, and initial pre-production capital expenditures of $322.5 million . The Phoenix ISR operation is estimated to have a stand-alone base case pre-tax NPV of $930.4 million (8% discount rate), IRR of 43.3%, initial pre-production capital expenditures of $322.5 million , and industry-leading average operating costs of US$3.33 /lb U 3 O 8 .  The PFS is prepared on a project (100% ownership) and pre-tax basis, as each of the partners to the Wheeler River Joint Venture are subject to different tax and other obligations.

Further details regarding the PFS, including additional scientific and technical information, as well as after-tax results attributable to Denison's ownership interest, are described in greater detail in the NI 43-101 Technical Report titled " Pre-feasibility Study for the Wheeler River Uranium Project, Saskatchewan, Canada " dated October 30, 2018 , with an effective date of September 24 , 2018.  A copy of this report is available on Denison's website and under its profile on SEDAR at www.sedar.com and on EDGAR at www.sec.gov/edgar.shtml .

Denison is a uranium exploration and development company with interests focused in the Athabasca Basin region of northern Saskatchewan, Canada . In addition to its effective 95% interest in the Wheeler River project, Denison's interests in the Athabasca Basin include a 22.5% ownership interest in the McClean Lake joint venture, which includes several uranium deposits and the McClean Lake uranium mill that is contracted to process the ore from the Cigar Lake mine under a toll milling agreement, plus a 25.17% interest in the Midwest Main and Midwest A deposits, and a 66.90% interest in the Tthe Heldeth Túé ("THT", formerly J Zone) and Huskie deposits on the Waterbury Lake property. The Midwest Main, Midwest A, THT and Huskie deposits are each located within 20 kilometres of the McClean Lake mill.

Denison is also engaged in post-closure mine care and maintenance services through its Closed Mines group (formerly Denison Environmental Services), which manages Denison's reclaimed mine sites in the Elliot Lake region and provides related services to certain third-party projects.

The disclosure of scientific or technical information related to the FFT or Wheeler River project contained in this release has been reviewed and approved, as applicable, by Mr. David Bronkhorst , P.Eng, Denison's Vice President, Operations or Mr. Andrew Yackulic , P. Geo., Denison's Director, Exploration, who are Qualified Persons in accordance with the requirements of NI 43-101.

Certain information contained in this news release constitutes 'forward-looking information', within the meaning of the applicable United States and Canadian legislation, concerning the business, operations and financial performance and condition of Denison.  Generally, these forward-looking statements can be identified by the use of forward-looking terminology such as 'potential', 'plans', 'expects', 'budget', 'scheduled', 'estimates', 'forecasts', 'intends', 'anticipates', or 'believes', or the negatives and/or variations of such words and phrases, or state that certain actions, events or results 'may', 'could', 'would', 'might' or 'will ' ' be taken', 'occur' or 'be achieved'.

In particular, this news release contains forward-looking information pertaining to the following: scope, objectives and interpretations of the FS process for the proposed ISR operation for the Phoenix deposit, including metallurgical testing programs described herein and the interpretation of the results therefrom; the scope and design, and related test work, with respect to plans and process designs for the FS; the definition of a saleable product;  and expectations regarding its joint venture ownership interests and the continuity of its agreements with its partners and third parties.

Forward looking statements are based on the opinions and estimates of management as of the date such statements are made, and they are subject to known and unknown risks, uncertainties and other factors that may cause the actual results, level of activity, performance or achievements of Denison to be materially different from those expressed or implied by such forward-looking statements. For example, the modelling and assumptions upon which the work plans for the Wheeler River Project are based may not be maintained after further work is completed.  In addition, Denison may decide or otherwise be required to discontinue testing, evaluation and development work if it is unable to maintain or otherwise secure the necessary resources (such as testing facilities, capital funding, regulatory approvals, etc.).  Denison believes that the expectations reflected in this forward-looking information are reasonable but no assurance can be given that these expectations will prove to be accurate and results may differ materially from those anticipated in this forward-looking information. For a discussion in respect of risks and other factors that could influence forward-looking events, please refer to the factors discussed in Denison's Annual Information Form dated March 25, 2022 or subsequent quarterly financial reports under the heading 'Risk Factors'. These factors are not, and should not be construed as being exhaustive. 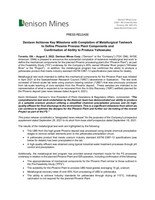 Saskatoon, Saskatchewan TheNewswire - August 9, 2022 UEX Corporation (TSX:UEX) (OTC:UEXCF) (" UEX " or the " Company ") announces that the Board of Directors of the Company (the " Board ") has unanimously determined, after consultation with its financial and legal advisors, that the unsolicited non-binding proposal that was received by the Company from Denison Mines Corp. (" Denison ") on August 8, 2022 (the " Denison Offer ") for the acquisition of all of the issued and outstanding common shares of UEX (" UEX Shares ") in consideration for common shares of Denison (" Denison Shares ") constitutes a "Superior Proposal" under the arrangement agreement dated June 13, 2022, as amended June 23, 2022 and August 5, 2022, among UEX, Uranium Energy Corp. (" UEC ") and UEC 2022 Acquisition Corp. (the " UEC Arrangement Agreement ").

Denison Mines Corp. ("Denison" or the "Company") (TSX: DML) (NYSE American: DNN) has made a further proposal (an "Acquisition Proposal") to acquire all of the issued and outstanding shares of UEX Corporation ("UEX"). Under the terms of the Acquisition Proposal, UEX shareholders would receive 0.32 shares of Denison in exchange for each share of UEX held, which represents an implied purchase price of $0.51 per UEX share, on a spot basis, as of the market close on August 8, 2022 . View PDF version.

Saskatoon, Saskatchewan TheNewswire - August 8, 2022 UEX Corporation (TSX:UEX) (OTC:UEXCF) (" UEX " or the " Company ") announces that it has received an unsolicited non-binding proposal from a company (the " Offeror ") for the acquisition of all of the issued and outstanding common shares of UEX in consideration for common shares of the Offeror by way of plan of arrangement (the " Offer ").

Uranium investors have exercised patience for quite some time — is their wait coming to an end?

"I look at where we're at in the uranium sector right now, and I don't think the fundamentals for our commodity have ever been better," said Scott Melbye, executive vice president of Uranium Energy (NYSEAMERICAN:UEC).

He noted that governments around the world are waking up to nuclear's spot in the energy mix, but after years of low prices it will be tough for producers to meet this growing wave of demand.

Saskatoon, Saskatchewa n TheNewswire - August 8, 2022 UEX Corporation (TSX:UEX) (OTC:UEXCF) ("UEX" or the "Company") is pleased to announce that is has filed an updated technical report for the Company's 100% owned West Bear Project that includes an updated mineral resource estimate for the property.

Ur-Energy Inc. (NYSE American:URG)(TSX:URE) (the "Company" or "Ur-Energy") is pleased to announce that it has signed a multi-year sales agreement with a leading U.S. nuclear utility to supply uranium produced from a project owned and operated by the Company's U.S. subsidiaries, including Lost Creek

Completing this supply agreement marks the first step of Ur-Energy's strategic product marketing plan by which the Company intends to commit a portion of its future uranium production into term sales agreements with U.S. based nuclear utilities. This initial agreement calls for the annual delivery of a base amount of 200,000 pounds of uranium concentrates over a six-year period beginning in the second half of 2023. Sales prices are anticipated to be profitable on a Company-wide, all-in cost basis and are escalated annually from the initial pricing in 2023.