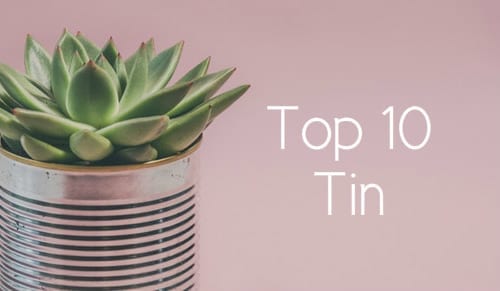 According to the US Geological Survey’s most recent report on the metal, the overall incline in tin production came on the back of higher prices. That coincides with the fact that the tin market has been in deficit for nine of the last 10 years, and is expected to remain in deficit as tin use increases.

PT Timah is a state-owned Indonesian company that was established in 1976 and is headquartered in Bangka-Belitung province. It’s a manufacturer and exporter of tin with operations ranging from exploration and mining to processing to marketing. The company has a number of subsidiaries.

Last year, it produced 30,200 tonnes of tin, a sizeable jump from 23,756 tonnes in 2016. This increase is thought to be the result of more favorable weather, government regulations and tin prices.

The third-largest producer of tin last year was Malaysia Smelting, which produced 27,200 tonnes of tin in 2017, an increase from 26,802 tonnes 2016. The company is also over a century old, and since 1887 has been a key integrated producer of tin and tin-based products, as well as a leader in custom tin smelting.

It is a subsidiary of Singapore’s the Straits Trading Company (SGX:S20), and has a number of its own wholly owned subsidiaries; Malaysia Smelting also holds interests in several other companies.

Founded in 1994, Yunnan Chengfeng Non-ferrous Metals is China’s second-largest producer of tin, behind Yunnan Tin Company. In 2017, it produced 26,800 tonnes of tin, increasing its output by 33.3 percent. Aside from tin, it produces indium, silver, gold, lead, bismuth and antimony. It has over 1,800 sets of smelting equipment, as well as 100 sets of environmental protection equipment.

The next largest producer of tin last year was Peru-based, privately owned Minsur. It is a major tin producer, though it also produces some gold. Last year, its tin output came in at 19,583 tonnes.

The company’s origins date back to the beginning of the 20th century, and it currently owns the San Rafael mine, which it bills as South America’s largest tin-producing mine. San Rafael has been operated by Minsur since 1977, and today produces 12 percent of the world’s tin. Minsur also holds a smelter and refinery, where it completes the tin production cycle.

Empresa Metalurgica Vinto is a state-owned Bolivian company that produces high-grade metallic tin ingots, receiving and processing concentrate from tin miners. In 2017, it put out 12,600 tonnes of tin.

Guangxi China Tin is another of the largest producers of tin, putting out 11,500 tonnes last year. Behind Yunnan Tin Company and Yunnan Chengfeng Non-ferrous Metals, it’s the third-biggest producer of tin in China. The private company, which was established in 1990, also produces indium, lead, antimony, zinc, silver, cadmium and bismuth, among other metals.

Founded in 1963, Thailand Smelting and Refining, better known as THAISARCO, is a private firm that manufactures tin, tin alloys and tin-related value-added products. In 2017, the company produced 10,600 tonnes of tin. The company has been managed and operated by the UK’s Amalgamated Metal since 1995, and Amalgamated Metal is its largest shareholder.

Switzerland’s Metallo Chimique produced 9,700 tonnes of tin in 2017, up from 8,541 tonnes in 2016. The private company operates a unique recycling and refining facility that processes secondary raw materials for the production of copper, tin, lead and nickel.

Metallo bills itself as a “zero-waste producer,” and states that its tin ingots are “well known for the low level of lead content.” Metallo’s increase in production is thought to be thanks to increased availability of waste and scrap tin, as a result of higher tin prices.

Now that you know about the largest producers of tin, would you invest in the metal? Let us know your thoughts in the comments below.

3 responses to “10 Largest Producers of Tin”