Participating in Red Cloud Securities Uranium Mini-Conference on May 13 Baselode Energy Corp. is pleased to announce that the fixed-wing airborne gravity survey has been completed over the Catharsis high-grade uranium exploration project Athabasca Basin area in northern Saskatchewan . “The Survey identified numerous gravity low features, any one of which could be indicative of clay alteration of basement rocks …

Participating in Red Cloud Securities Uranium Mini-Conference on May 13

Baselode Energy Corp. (TSXV: FIND) (OTCQB: BSENF) (” Baselode ” or the ” Company “) is pleased to announce that the fixed-wing airborne gravity survey (the ” Survey “) has been completed over the Catharsis high-grade uranium exploration project (the ” Project “), Athabasca Basin area (” Athabasca “) in northern Saskatchewan .

“The Survey identified numerous gravity low features, any one of which could be indicative of clay alteration of basement rocks associated with uranium mineralization.  Our preliminary interpretations have identified a large proportion of gravity low features that correlate with magnetic features of interest. This increases our confidence in our geological model and helps vector us towards potential basement-hosted uranium mineralization.  We plan to follow-up the Survey with an electromagnetic survey to prioritize and define areas for planned ground work and diamond drilling,” said James Sykes , CEO and President of Baselode.

About this Gravity Survey
The Falcon® Plus airborne gravity gradiometer, gravity and magnetics Survey covered the entire Project with 400 m flight line-spacing and was completed in 15 days. The Survey outlined numerous gravity low features commonly associated with hydrothermal alteration systems and uranium deposition. In addition, linear gravity low trends have been identified that correlate well with magnetic linear features interpreted as structural corridors (see Figure 1 for results and interpretations).

Next Steps
Immediate follow-up exploration plans for Catharsis include; i) an airborne VTEM survey required to further refine structural targets, anticipated to start in the next 2 to 3 weeks, ii) ground-truthing and reconnaissance, geologic mapping, and sampling to help prioritize planned diamond drill programs, anticipated to start in late Q2/early Q3, and iii) 2,500 metres of diamond drilling within priority target areas, anticipated to begin in late Q3.  Baselode applied for ground exploration permits in April, and permits are expected to be received in June.  The Company is actively engaged in the consultation process with Indigenous communities in the Project area.

A similar Survey has been completed over Baselode’s Hook project (see News Release dated April 26, 2021 ), however, the results have yet to be interpreted. Baselode will provide an update of the results as they become available.

Red Cloud Securities’ Uranium Mini-Conference featuring Baselode’s James Sykes
The Company also wishes to announce James Sykes will be presenting at the Red Cloud Securities’ Uranium Mini-Conference, “Uranium: Fueling the Path Towards Electrification” on Thursday, May 13, 2021 at 10:40 AM ET .  Please register through the following link to participate and hear James’ updates and Summer exploration plans for the Company.  Register here at the link below:
https://www.redcloudfs.com/uraniumconference2021/

About Baselode Energy Corp.
Baselode currently controls 100% of approximately 171,000 hectares for exploration in the Athabasca Basin area, northern Saskatchewan, Canada . The land package is free of any option agreements or underlying royalties.

Baselode’s Athabasca 2.0 exploration thesis is focused on discovering near-surface, basement-hosted, high-grade uranium orebodies outside of the Athabasca Basin. The exploration thesis is further complemented by the Company’s preferred use of innovative and well-understood geophysical methods to map deep structural controls to identify shallow targets for diamond-drilling.

QP Statement
The technical information contained in this news release has been reviewed and approved by Cameron MacKay , P.Geo., Projects Manager for Baselode Energy Corp., who is considered to be a  Qualified Person as defined in “National Instrument 43-101, Standards of Disclosure for Mineral Projects.”

Certain information in this press release may contain forward-looking statements. This information is based on current expectations that are subject to significant risks and uncertainties that are difficult to predict. Actual results might differ materially from results suggested in any forward-looking statements. Baselode Energy Corp. assumes no obligation to update the forward-looking statements, or to update the reasons why actual results could differ from those reflected in the forward looking-statements unless and until required by securities laws applicable to Baselode Energy Corp. Additional information identifying risks and uncertainties is contained in the Company’s filings with Canadian securities regulators, which filings are available under Baselode Energy Corp. profile at www.sedar.com . 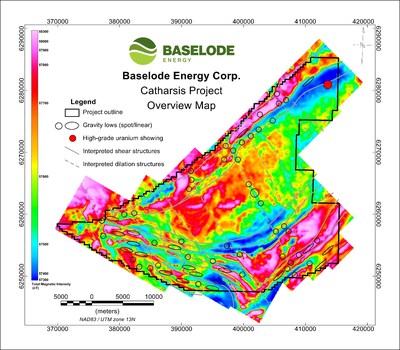