Renforth Resources Inc. (CSE:RFR)(OTC PINK:RFHRF)(WKN - A2H9TN) ("Renforth" or the "Company") is pleased to inform shareholders that field work has commenced at Surimeau with the deployment of a geological team to Surimeau's Victoria West section, this area covers approximately 5kms of strike in the western end of the southern mineralized limb at Surimeau

The 7336 hectare Surimeau Property compiled by Renforth in 2019 and 2020, consists of 128 staked claims, including several previously identified as the southern end of Renforth's contiguous Malartic West Property. Surimeau's northern boundary is approximately 4kms south of the Cadillac Break, underlain by the Pontiac sediments and contiguous to the Canadian Malartic Mine Property, in northwestern Quebec. Renforth's Surimeau Project is the first time the Victoria West, Colonie, Lalonde and Surimau mineralized occurrences have been consolidated into one project and evaluated on the basis of a whole. The Project has been interpreted to host a large scale mineralized system consisting of two "limbs", the south and north limbs. The southern limb is interpreted using regional government geological and geophysical records, and well as Renforth's own initial field work, to strike over ~20kms between the Victoria West sector in the west and the Colonie sector in the east, the area between the two is entirely unexplored. The portion of the northern limb interpreted to be on Renforth's ground spans ~30km of strike, including the Lalonde sector in the central area and Surimau in the NW end of the limb.

Exploration work in the Victoria West commenced in the early 1940's, after the discovery, during the construction of the Rapide-Sept hydroelectric generating station, whose powerline transects the property and access road runs through Surimeau, of zinc and nickel mineralization in the area. Intermittent work at Victoria West by several holders up until the 1980s delineated ~5km of strike of Zinc bearing felsics and Nickel bearing ultramafics through extensive trenching, some drilling and EM and Mag surveying. Historically the Colonie zone to the east was held by different groups at different times, the area between the two is entirely unexplored but continues the geophysical anomaly and geological structure.

Renforth is commencing a Victoria West focused field program designed to integrate historic data, Renforth's recent results and the conditions in the field. This will be accomplished by mapping identified trenches and prospecting further west at Victoria West. The ultimate aim of this work is the field selection of drill targets for a drill program in the near future at Victoria West. Weather conditions and field time permitting Renforth would also like to carry out initial prospecting on the Surimau zone, in the NW portion of the property, this area was acquired subsequent to Renforth's initial prospecting campaign at Surimeau, which visited each of Victoria West, Colonie and Lalonde, successfully obtaining surface mineralization at each location. 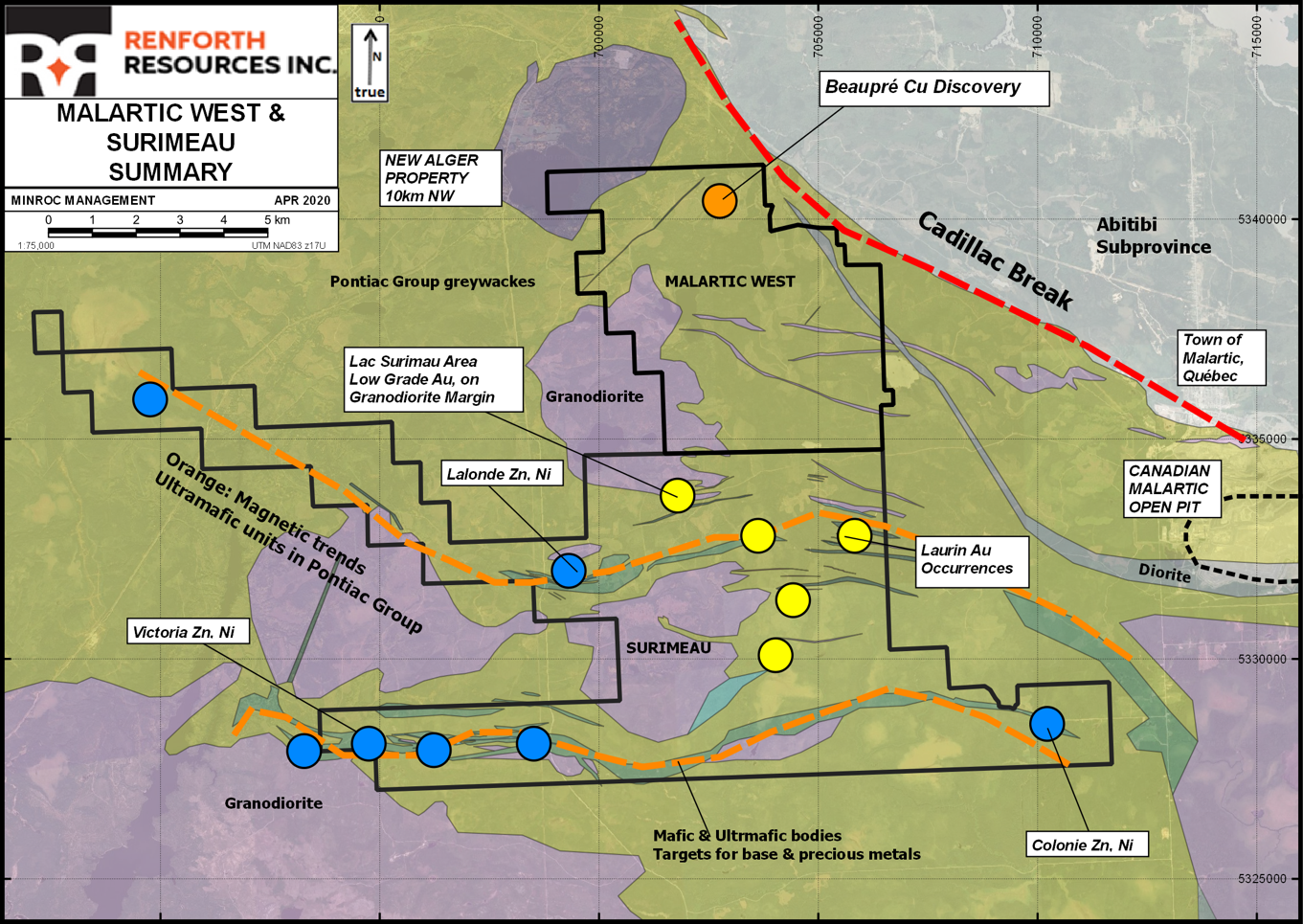 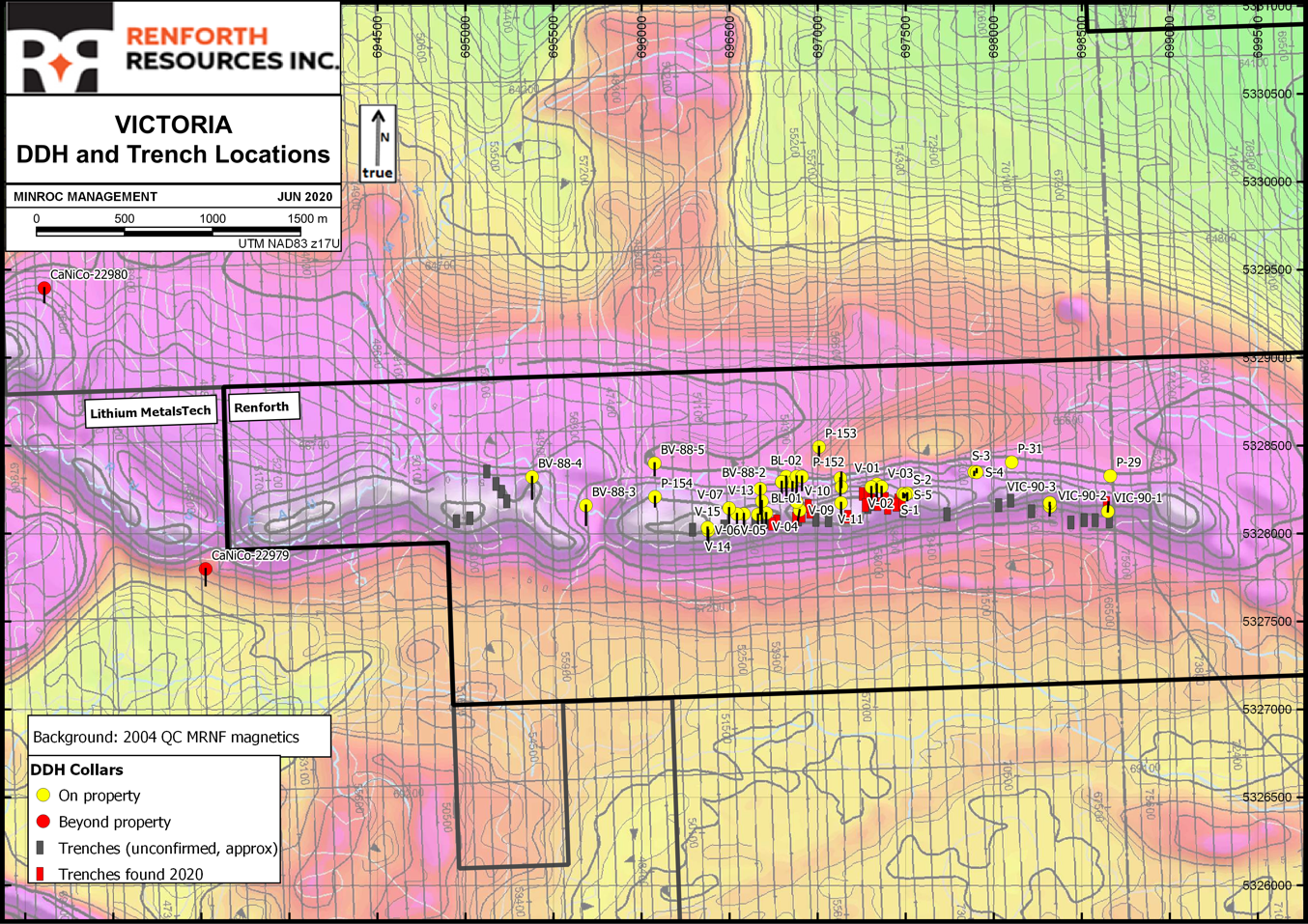 Renforth would also like to announce that the Company's AGM was completed with eight shareholders holding 90,132,035 shares present at the meeting, the recommendations of Management were carried, including the election of the Board of Directors consisting of Nicole Brewster, Wally Rudensky CA, Judi Wood, Kurt Breede P.Eng, John Webster and the Hon. Dr. Kellie Leitch.

Brian H. Newton P.Geo, a "qualified person" under NI 43-101, has reviewed and approved the technical disclosure in this press release.

In Quebec Renforth holds the Parbec Property in the Malartic gold camp, with gold present at surface and to some depth, located on the Cadillac Break, contiguous to the East Amphi portion of the Canadian Malartic Mine property. Parbec carries an open-pit constrained 43-101 resource with additional gold bearing structures, outside of the Cadillac Break on the property, outside of the current resource. Renforth also holds Malartic West, contiguous to the western boundary of the Canadian Malartic Mine Property, located in the Pontiac Sediments, this property is gold bearing and was the recent site of a copper discovery. Renforth has acquired the Surimeau property, also contiguous to Canadian Malartic and the southern border of the Malartic West property. Surimeau hosts polymetallic mineralization and represents the consolidation of four historic properties into one property for the first time. In addition to this Renforth has optioned the wholly owned Denain-Pershing gold bearing property, located near Louvicourt, Quebec, to O3 Mining Inc.

In Ontario, Renforth holds the Nixon-Bartleman surface gold occurrence west of Timmins, Ontario, drilled, channeled and sampled over 500m - this historic property also requires additional exploration to define the extent of the mineralization.

No securities regulatory authority has approved or disapproved of the contents of this news release.

Allkem - Appointment of Peter Coleman as Director and Chair-elect

Top Stories This Week: Gold Nears Bear Market Territory, Where is the Bottom?