CANEX Metals Inc. is pleased to announce the completion of the Company’s second reverse circulation drilling program at the Gold Range Project in Northern ArizonaThe Company successfully completed 34 drill holes across 2.5 kilometres of strike length along the southern portion of the Gold Range Property. In total 2357.6 metres were drilled in holes ranging from 38 to 137 metres deep. During the program the amount of …

CANEX Metals Inc. (“CANEX” or the “Company”) is pleased to announce the completion of the Company’s second reverse circulation drilling program at the Gold Range Project in Northern Arizona

The Company successfully completed 34 drill holes across 2.5 kilometres of strike length along the southern portion of the Gold Range Property. In total 2357.6 metres were drilled in holes ranging from 38 to 137 metres deep. During the program the amount of drilling was increased by over 25% from the originally planned 1829 metres due to efficient drilling progress and encouraging drill observations. During the program 15 holes were drilled at the Eldorado Zone to confirm and expand the Company’s previously announced bulk tonnage oxide discovery, where hole GR20-9 intersected 27.4 metres grading 0.9 g/t gold starting at surface (previously released see press release dated November 2 2020). Five holes tested various targets across the southern part of the property and 14 holes tested the Excelsior Mine area.

During the program 1642 drill samples were collected and have been submitted for assay with first results expected in the next few weeks. Select targets in the central and northern part of the property remain to be tested and additional work focused on the Eldorado to Excelsior area and testing additional targets will commence following assay results.

Figure 1. Photographs from Gold Range. Left, RC drilling at the Eldorado Zone. Right, close up of a recently identified sugary quartz vein containing gold from the Excelsior Mine.

The program focused on testing the Eldorado Zone and the Excelsior Mine including select targets along 2.5 km of strike length between the two zones. The program was designed to test bulk tonnage targets which can surround narrow high grade gold veins. At the Excelsior mine, a generation of sugary quartz veins and veinlets with open cavities and gold was observed cutting the main Excelsior Vein. The extent and distribution of this gold rich event remains poorly defined but has been targeted in select drill holes.

For further information please see our corporate presentation on the Company’s website at www.canexmetals.ca.

About the Gold Range Property

The Gold Range Property is located in Northern Arizona within an underexplored belt containing historic load and placer gold production. CANEX has identified widespread gold mineralization within a 3 kilometre by 5 kilometre area including two gold-in-soil anomalies that are up to a kilometre in scale. 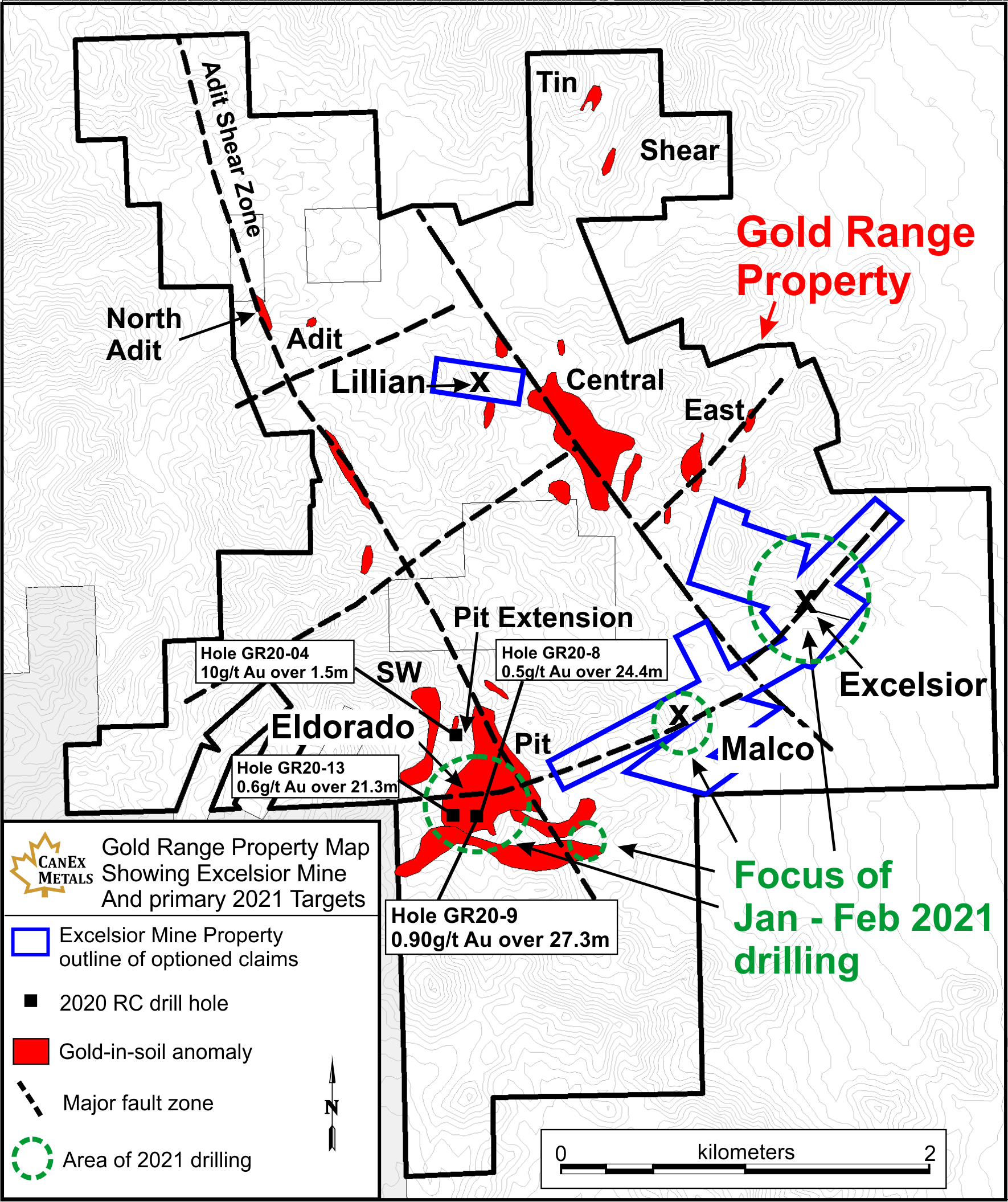 Figure 2. Map showing the Gold Range Property, the Excelsior Mine Property under option, and the main areas of focus for the current drill program.

Drilling in August and September 2020 identified near surface bulk tonnage gold potential at the Eldorado Zone with Hole GR20-9 returning 0.9 g/t gold over 27.3 metres including 5.9 g/t gold over 1.5 metres. Hole GR20-8 drilled from the same pad as GR20-9 returned 0.5 g/t gold over 24.4 metres starting from surface. Hole GR20-13, drilled 150 metres west of GR20-9, returned 0.6 g/t gold over 21.3 metres. The new discovery correlates with a strong gold in soil anomaly and sheeted quartz veinlets and stockworks within metamorphic rocks. The immediate target area at Eldorado containing exposed mineralization and strong gold in soils is 250 metres long by 24 to 80 metres thick, with mapping, gold in soils, and surface rock sampling suggesting the zone could extend for over a kilometer along strike or more. The Excelsior Mine, 2.5 kilometres east of Eldorado, has seen historic underground and open pit mining along a zone 200 metres long and open along strike. Gold mineralization is centered along the shallow dipping high grade Excelsior Vein which is surrounded by a halo of sheeted quartz and quartz carbonate veins 20 to 50 metres wide.

The Company remains focused on confirming and expanding the new Eldorado discovery and testing and delineating the Excelsior Mine and surrounding area through continued exploration and drilling.

Dr. Shane Ebert P.Geo., is the Qualified Person for CANEX Metals and has approved the technical disclosure contained in this news release.

Except for the historical and present factual information contained herein, the matters set forth in this news release, including words such as “expects”, “projects”, “plans”, “anticipates” and similar expressions, are forward-looking information that represents management of CANEX Metals Inc. internal projections, expectations or beliefs concerning, among other things, future operating results and various components thereof or the economic performance of CANEX. The projections, estimates and beliefs contained in such forward-looking statements necessarily involve known and unknown risks and uncertainties, which may cause CANEX’s actual performance and financial results in future periods to differ materially from any projections of future performance or results expressed or implied by such forward-looking statements. These risks and uncertainties include, among other things, those described in CANEX’s filings with the Canadian securities authorities. Accordingly, holders of CANEX shares and potential investors are cautioned that events or circumstances could cause results to differ materially from those predicted. CANEX disclaims any responsibility to update these forward-looking statements.