Golden Predator Mining Corp. (TSXV:GPY) (the “Company”) today announced results of the 2018 drill program in the Central Core Area at the 3 Aces Project in southeast Yukon, Canada, which was completed to test for extensions of the high grade structures outcropping  in the Hearts Zone.

Golden Predator Mining Corp. (TSXV:GPY) (the “Company”) today announced results of the 2018 drill program in the Central Core Area at the 3 Aces Project in southeast Yukon, Canada, which was completed to test for extensions of the high grade structures outcropping  in the Hearts Zone.   Seven HQ diamond drill holes consistently intercepted two parallel, closely spaced gold-bearing structures along 220m of strike and 500m down dip from the Hearts discovery outcrop.   This was the deepest drilling to date on the project and the structures in the Hearts Zone continue to be open in all directions along strike and at depth.

Golden Predator Executive Chairman William Sheriff commented: “Confirming the continuity and mineralization of the structures down dip and on strike, right where we projected them to be, is a game-changer in terms of demonstrating the size potential of the 3 Aces Project.  It is now clear that the high grade surface outcrops previously discovered in the Central Core Area are not isolated occurrences but rather expressions of a much larger system, which significantly expands the potential at 3 Aces.”

All seven drill holes cut the structures where they were expected and reported excellent widths of gold mineralization with localized high grades. This drilling confirms that 3 Aces Project structures have persistent lateral and vertical continuity and that these structures likely account for other high grade surface outcrops exposed along the 4.5km long Hearts-Clubs corridor and elsewhere within the 13.5 km2 Central Core Area.

The exploration drilling program was conceived as a first pass lateral and down dip test of the gold bearing structures that crop out at the Hearts discovery.  Drill collars were off-set along strike for 220m of the Hearts Zone towards the Spades Zone to the east.  The projection of these moderately-dipping structures was tested at various depths to 500m down dip from the Hearts discovery.  Intersections of gold-bearing structures were encountered at the predicted locations in each of these drill holes, confirming both lateral and vertical continuity.  These higher grade parallel structures lie within thick envelopes of anomalous gold mineralization.

This 2,600m drill program was designed to find extensions of the structures in the Hearts Zone and determine if they were mineralized. Relatively small diameter HQ drill tools (58.5 mm in diameter) were used to maximize the number of intersections. At surface, the Hearts discovery outcrop assays above 30 grams per tonne and samples contain abundant coarse gold. Gold values were obtained from the widely-spaced split HQ core in the 2018 program, however, they only provide an initial assessment of the gold present within the mineralized structure due to the small sample volumes.  The larger the sample, the more precise the grade estimate, as we have demonstrated in past drilling and in our ongoing bulk sampling in the Spades Zone.   Assay results from larger diameter PQ core, reverse circulation drilling and bulk sampling generate considerably larger sample volumes and produce more reliable grade estimates than split HQ drill core that has a much smaller sample volume.  Golden Predator will continue to use HQ core to explore for and confirm continuity of mineralized structures at depth and along strike but will rely on larger diameter PQ core and reverse circulation (RC) in-fill drilling for grade determination within the structures.

Composite results from the down dip drill test of the Hearts Zone are: 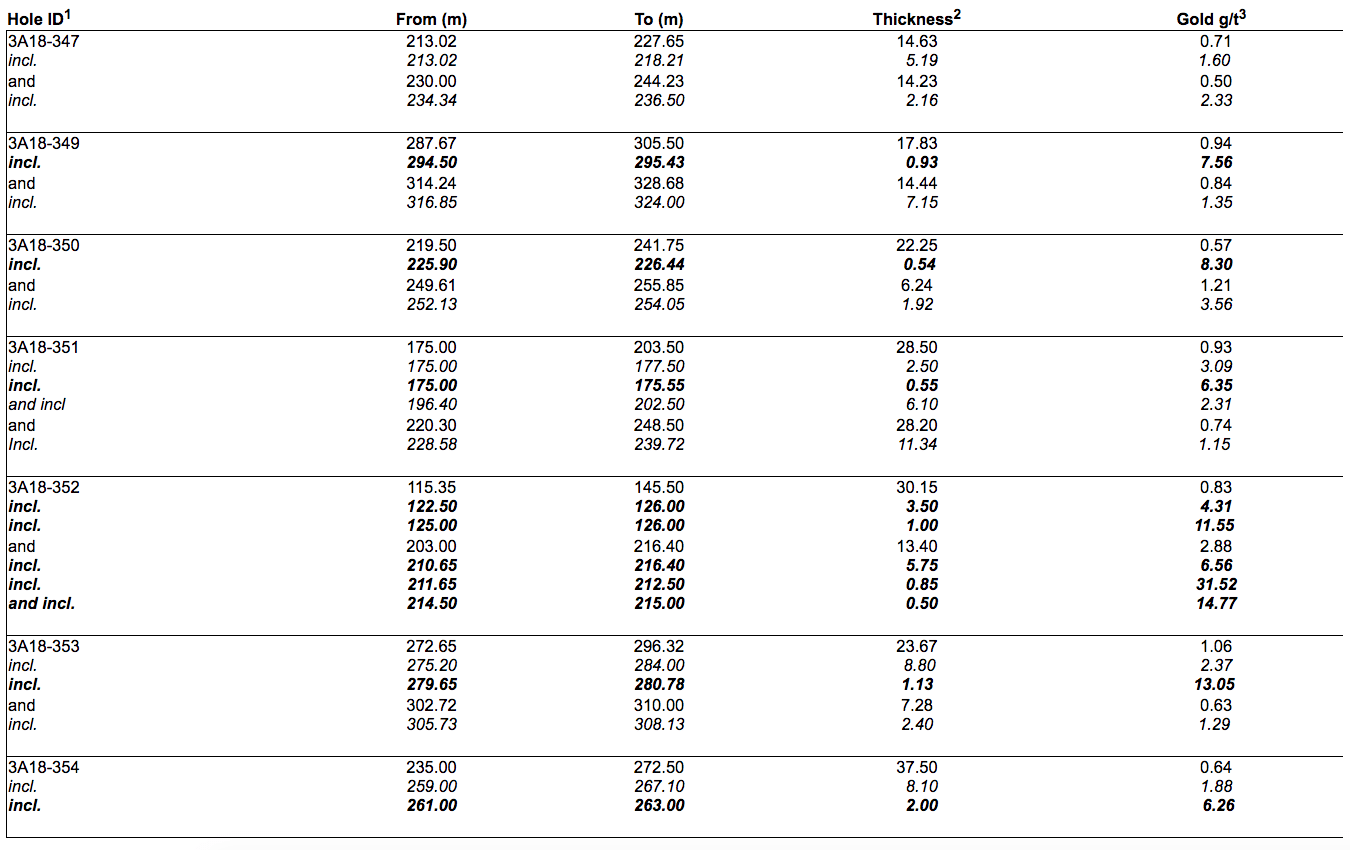 1Significant intervals are length weighted average grades chosen based on continuity of mineralization and gold grade with composite grade exceeding 0.5 g/t gold.
All holes were HQ core holes cut in half for sample submission
2All intervals are reported as drilled thicknesses; true thicknesses are estimated to be 90-100% of drilled thicknesses.
3Reported Au assay grade sourced from SGS using SGS_GO_FAA 505 method.

A key observation from this drill program is that the high-grade intercepts are surrounded by broad envelopes of lower grade gold.  This observation was not available to GPY during earlier drill programs exploring other high grade structures that crop out in the 13.5 km2 Central Core Area.  These low grade envelopes reliably signal that high-grade gold values will likely be encountered with additional closer-spaced drilling along mineralized structures within the low grade envelope. In the case of the Hearts Zone, GPY believes that the presence of the broad envelopes of mineralization surrounding the gold bearing structures suggest grade enhancement is likely with closer-spaced drilling. Utilizing this observation, GPY can now re-evaluate results from previous programs, like the Clubs Zone, to ensure that the drilling fully tested the target potential.

The 3 Aces Project is an orogenic gold target covering 357 km² (35,700 ha) in southeast Yukon. The Company has to date focused exploration on the 13.5 km2 Central Core Area, a broad gold-in-soil anomaly, where numerous orogenic gold-bearing quartz veins have been discovered. Exploration over the past two years has systematically advanced the project by establishing: (1) high gold grades can be reliably sampled; (2) gold mineralization is in predictable stratigraphic structural locations; and (3) gold grades have robust continuity within the recognized controlling features. Results support a stratigraphic structural model that predicts extensive lateral and vertical continuity of the 3 Aces mineral system. Orogenic gold deposits are among the world’s largest and richest such as the California Mother Lode Belt and the Juneau Gold Belt.

All analyses for the drill samples were performed by SGS Canada, Inc. with sample preparation in Whitehorse, YT and Burnaby, BC, and assaying in Burnaby, BC.  Drill samples were analyzed for gold using a 50 gram fire assay with atomic absorption finish (GO FAA505) or gravimetric finish (GO FAG505) on over limit results (>100 g/t gold).  Quality control standards include standard reference material, certified blank and field duplicate samples in every sample dispatch.

The technical content of this news release has been reviewed and approved by Jeff Cary, CPG, a Qualified Person as defined by National Instrument 43-101 and Project Geologist for the 3 Aces Project.

Golden Predator Mining Corp. is a gold exploration company focused on advancing key projects with significant exploration upside, good infrastructure and community support. The Company is actively advancing the Brewery Creek Project, Yukon, a past-producer with a 2014 Preliminary Economic Assessment prepared in accordance with NI 43-101. At 3 Aces Project, the high grade orogenic gold project with visible gold at surface shows structural continuity at depth.  Bulk sampling and processing at the 50 tpd Company-owned processing plant has demonstrated gold recoveries of over 85% using a chemical-free process. This green gold provides for the production of .9999 gold coins from the Yukon Mint, a wholly-owned subsidiary of Golden Predator.

Neither TSX Venture Exchange nor its Regulation Services Provider (as that term is defined in policies of the TSX Venture Exchange) accepts responsibility for the adequacy or accuracy of this release. No stock exchange, securities commission or other regulatory authority has approved or disapproved the information contained herein. This press release contains forward-looking information that involve various risks and uncertainties regarding future events. Such forward-looking information can include without limitation statements based on current expectations that the private placement will complete as described herein, that the Project will advance through permitting and feasibility.  Actual results and future events could differ materially from those anticipated in such information. These and all subsequent written and oral forward-looking information are based on estimates and opinions of management on the dates they are made and are expressly qualified in their entirety by this notice. Except as required by law, the Company assumes no obligation to update forward-looking information should circumstances or management’s estimates or opinions change.