This Western Copper and Gold profile is part of a paid investor education campaign.*

The company has recently acquired the Canadian Creek project, which is adjacent to both the Casino project and Newmont Goldcorp’s (TSX:NGT,NYSE:NEM) Coffee project. On September 24, 2019 Western announced that they had hit a high-grade gold intercept that, if proven, could allow for a starter operation and be a game-changer for the project.  Further drilling results are pending and expected to be included in an updated resource estimate for the Casino project.

Western Copper and Gold is led by a highly-knowledgeable management team with a proven record of success. For example, Western Copper and Gold’s parent company, Western Silver Corporation, was acquired by Glamis Gold for $1.6 billion in May 2006. Glamis Gold was subsequently bought by Goldcorp, now Newmont Goldcorp, in November 2006. Management is supported by a highly-qualified team of engineers dedicated to bringing Casino into production.

“Casino is a rare asset in that it is sizeable, economic, well-advanced and located in a great jurisdiction. Casino is the key asset in the emerging Yukon gold district.” said Western Copper and Gold President and CEO Paul West-Sells. 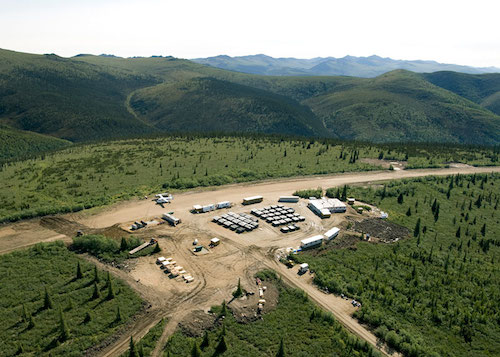 The Yukon is ranked as one of the most attractive mining investment jurisdictions in the world and has attracted the attention of numerous major mining companies over the last few years. Additional investment in the Yukon has been spurred by recent infrastructure funding from the regional and federal governments. In September 2017, the territorial and federal governments announced that they would provide approximately C$130 million in funding to upgrade and subsidize a large portion of the Casino access road, as part of the Yukon Gateway project.

“Since 2006, we have been working with the federal, territorial and First Nations governments and top environmental consultants to ensure that the planned road leading into the Casino site will have the lowest possible environmental impact and will ensure maximum benefit for local communities and First Nations,” said West-Sells.

Using base commodity prices of $1,400 per ounce gold and $3 per pound copper, the 2013 feasibility study shows the project has promising economics, such as a 20.1 percent IRR and an after-tax $1.83 billion NPV, due in large part to a best-in-class strip-ratio and initial high-grades.

The project has an initial mine life of 22 years at 120,000 tonnes per day throughput, with the potential for an additional 25 years if the inferred resource is mined as well. The deposit is naturally hedged with copper accounting for approximately for 46 percent and gold contributing 34 percent of the projected revenue.

The feasibility study is based on a conventional open-pit mine, concentrator complex and heap leach operation. The study shows an initial capital investment of $2.46 billion, which is in-line with other copper projects of this size. Combined mining and milling operating costs are estimated at $8.52 per tonne ore milled, with a net smelter return of $31.59 per tonne for the first four years and $22.59 per tonne for the life of the mine.

“This project is economic at spot prices. And that’s one of the main aspects of what separates Casino from other developing projects. We are not positioning this for a recovery in commodity prices – Casino is economic at this point in this cycle,” said West-Sells.

A review of the feasibility study in 2017 indicated that the economic metrics (e.g. IRR and NPV) at current prices and exchange rates was comparable to the base case metrics.

Western Copper and Gold is actively advancing key aspects of the engineering work at Casino. The company has signed an agreement with M3 Engineering and Technology to build the mine and has an LOI with the engineering firm for the operations and management of the mine once in production.

Western Copper and Gold has also secured an MOU with Siemens concerning operations, equipment supply and funding for a power plant and other electrical equipment required for mining and processing facilities. In addition, initial agreements have been made with potential suppliers of liquefied natural gas.

Delivering Copper at the Right Time

As a result of underinvestment in new projects, declining grades at existing mines and a myriad of recent production issues, the copper market is headed toward a supply deficit with a forecasted 10 million tonne deficit by 2028. 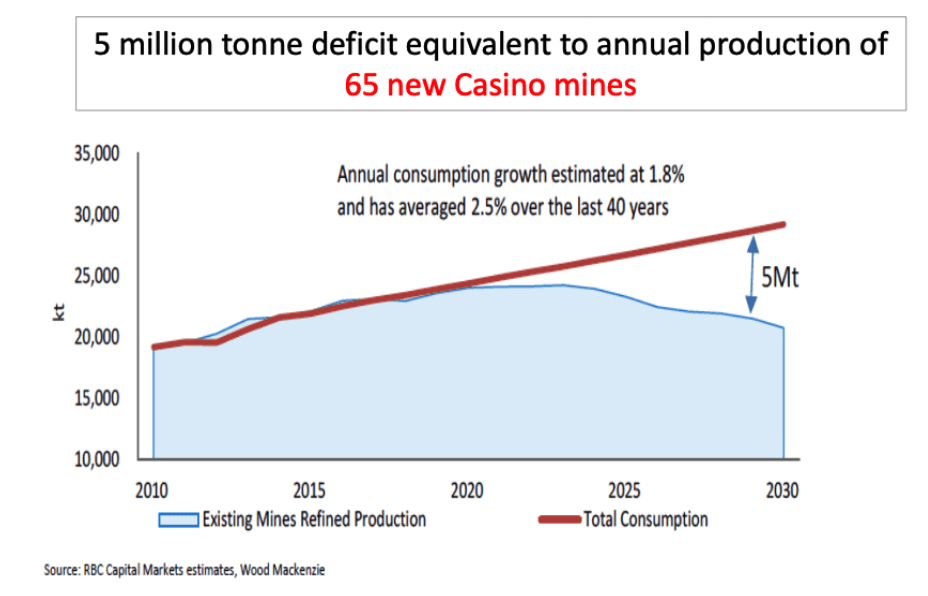 In November 2018, the company completed its best available tailings technology study for the project, which was conducted with First Nation, Yukon Environmental and Socio-economic Board (YESAB) and Yukon government participation.

The design enhancements include:

This 18-month-long process was conducted to review the tailings and mine waste disposal plan and is a significant component of the environmental assessment application. It reviewed 11 locations and five different technologies and assessed them from an environmental, technical, economic and social point of view.

The selected option impounds tailings and mine waste in a facility limited by an embankment constructed by cyclone tailings material. It is similar to that which was proposed in the original feasibility study, with proposed design enhancements including reduced water storage during operations, reduced height and slope of the embankment, relocation of potentially acid-generating tailings and minimized long-term water storage at mine closure.

In June 2019, Western Copper and Gold commenced a 10,000-meter drill program at the Casino project, primarily focused on the Casino deposit. The aim of the exploration program was to convert inferred mineralization into indicated mineralization. The company later announced the drill results of its 2019 campaign at Casino, including 55.1 g/t gold over 2.97 meters at a depth of 147.98 m.

In July 2019, Western Copper and Gold acquired the Canadian Creek Property from Cariboo Rose Resources Ltd. (TSXV:CRB). The property shares a six-kilometer-long north-south boundary on the eastern side with the Casino project and a 12-kilometer-long east-west boundary on the northside with Newmont Goldcorp’s Coffee project. As part of the Yukon’s Gateway project, the Coffee-Casino connector road also lies on some of the property.

Western Copper and Gold believes that the Casino deposit may extend onto the Canadian Creek project. To test this theory, the company intends to drill a 700-meter untested area between the most westerly Casino drill holes and the closest drill holes on the Canadian Creek property, as part of its drill program at Casino. The four drill holes on the property closest to the property border contained copper-gold-molybdenum mineralization, which are consistent with the outer edges of a porphyry copper–gold–molybdenum deposit.

The Canadian Creek project also offers additional exploration upsides for Western Copper and Gold. The Ana porphyry copper-gold-molybdenum zone lies 1.5 kilometers west of the primary target. The Ana zone measures 1.5 kilometers by one kilometer and contains no historical drill holes in the center of the target; however, mineralization at the target is similar to what has been found at the Casino deposit. The Canadian Creek project also hosts structurally-controlled gold-bearing zones in the northern half of the property similar in style to the Coffee project.

Mr. Corman worked as a mining analyst and investment banker in the early 1960s, until 1968 when he joined the Harbinson Mining Group as a senior officer. Mr. Corman was involved in the discovery and development of the Durham antimony mine in New Brunswick and the NBU copper-zinc deposit in Northwest Ontario . In 1977, Mr. Corman moved to San Francisco where he participated in the exploration and development of the Roosevelt Geothermal Field in Southwest Utah .

In 1995, Mr. Corman merged his exploration company with Western Copper Holdings, a subsidiary of Teck Corporation, where he became President.

Paul West-Sells, Ph.D. — President and CEO
Dr. West-Sells has over 20 years’ experience in the mining industry. After obtaining his Ph.D. from the University of British Columbia in Metallurgical Engineering, he worked with BHP, Placer Dome, and Barrick in increasingly senior roles in Research and Development and Project Development. Since 2006, Dr. West-Sells has worked for Western Copper and Gold, holding a number of technical and executive positions. Currently, as the President and CEO of Western Copper and Gold, Dr. West-Sells oversees the day to day operations of the company. Dr. West-Sells currently sits on the Yukon Minerals Advisory Board and the Centre for Northern Innovation in Mining Governing Council.

Mr. Prasad has been with Western Copper and Gold since 2011. He worked closely with the CFO on financial and regulatory manners, assisted in the preparation of financial statements, and was responsible for accounts payable.  Mr. Prasad holds a B.A Technology (Accounting) from British Columbia Institute of Technology and is on track to earn his CPA designation in 2015. He is an avid sports fan and fitness buff.

Cameron Brown, P.Eng. — VP Engineering
Mr. Brown has 40 years of experience in mineral processing. He has been responsible for plant maintenance, project management and engineering of major base and precious metal projects. He was formerly Project Manager for Bechtel Engineering and Western Silver Corporation.

Ms. Christie has over 20 years of experience in the exploration and mining business. Currently the President and CEO of Banyan Gold Corp, Ms. Christie serves on the boards of Constantine Metal Resources Ltd. and Klondike Gold Corp. She was formerly the President of privately owned Gimlex Gold Mines Ltd., one the Yukon’s largest placer mining operations. Ms. Christie has been a board member of PDAC, AMEBC and other industry associations and was a founding board member of the Yukon Environmental and Socio-Economic Assessment Board. She is active in non-profits and charities, including being President of a registered charity “Every Student, Every Day” that works to improve attendance in Yukon schools.

Mr. Williamson is a professional director with over 40 years of experience in natural resources and investment banking, where his focus has been on capital markets and mergers and acquisitions. Mr. Williamson worked in the oil and gas sector before transitioning into investment banking at Midland Walwyn/Merrill Lynch Canada Inc. where he was Vice-Chairman of Investment Banking until 1998.  Mr. Williamson has held various positions on Boards throughout his career, including Eicon Technology Corporation, Glamis Gold Ltd., BioteQ Environmental Technologies Inc., Uranium One Inc., BlackRock Ventures Inc., Quadra FNX Mining Ltd., Tahoe Resources Inc. and Goldcorp Inc. Mr. Williamson is a member of the National Association of Corporate Directors (NACD), Institute of Corporate Directors (ICD) and the Professional Engineers of Ontario (PEO).

*Disclaimer: The profile provides information which was sourced and approved by Western Copper and Gold Corporation (TSX:WRN,NYSEAMERICAN:WRN) in order to help investors learn more about the company. Western Copper and Gold Corporation is a client of the Investing News Network (INN). The company’s campaign fees pay for INN to create and update this profile page, to which links are placed on Investingnews.com and channel newsletters.