This Orogen Royalties profile is part of a paid investor education campaign.*

Orogen Royalties (TSXV:OGN) is a junior royalty company that is focused on creating, identifying and acquiring highly prospective precious metal royalties. Orogen Royalties was created from the merger of two very well-established exploration companies called Evrim Resources and Renaissance Gold. The company is led by a highly experienced management team with over a decade of experience working in executive roles with major and junior mining companies. 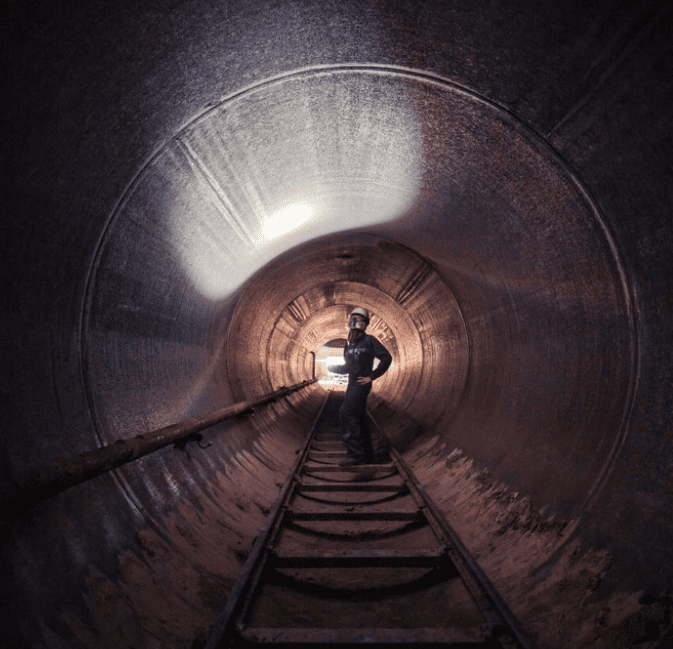 The company established shareholder value and long-term value creation as an organic royalty generator through project generation and strategic partnerships. Orogen Royalties grows their exploration assets in highly prospective and prolific gold and copper regions, including the Golden Triangle in northwestern British Columbia in Canada, the Laramide Belt in Mexico, and the Walker Lane in Nevada, USA. 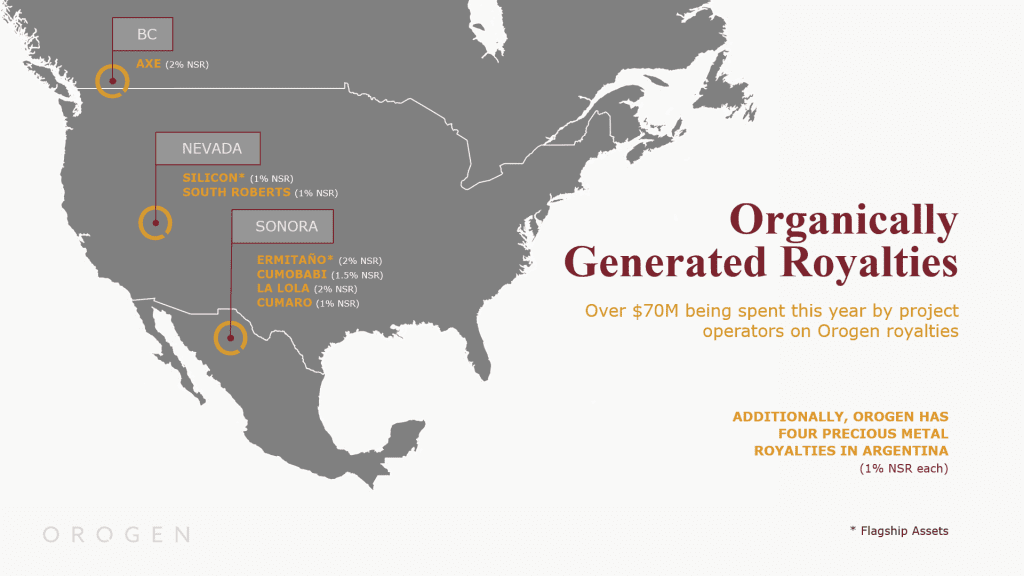 The Ermitaño project, owned and operated by First Majestic Silver Corp. (TSX:FR). has impressive inferred resources of 11 million ounces of silver and 522,000 ounces of gold which is a whopping 59 percent increase from the resources that were inferred in 2019. Orogen has a 2 percent NSR on the project and is located near the producing Santa Elena mine.  First Majestic is putting together a Pre-Feasibility Study and prepares to start production at the end of 2021.

The second key royalty asset is Silicon Gold project, located in the mineral-rich Southwest Nevada Volcanic Field that hosts reserve and production resources of more than 60 tonnes of gold and 150 tonnes of silver. Orogen Royalties has a 1 percent NSR on the project. The Silicon Gold project also leverages strategic positioning near the Lynnda Strip owned by Corvus Gold Inc. that has significant mineral resource estimates. Significant gold discoveries have been made in the last four years along a newly defined north-south trending belt at least 6 kilometers long.  From north to south, these discoveries include the Central Silicon zone, being drilled by AngloGold Ashanti, the Merlin zone, also being drilled by AngloGold Ashanti, the Lynnda Strip zone, drilled by Corvus Gold, the C-Horst zone, being drilled by Coeur Mining, and the Mother Lode zone, also drilled by Corvus Gold.

Total reported production and resources for the greater Beatty area are now more than 8 million ounces gold, not including resource estimates by AngloGold at Silicon or Merlin, Coeur Mining at C-Horst or Corvus at Lynnda Strip. Exploration work by AngloGold is ongoing to delineate the ore bodies at both Silicon and Merlin in greater detail. AngloGold intends to report an initial mineral resource in 2022, followed by a conceptual development plan for the district.   Production is anticipated to start between 2024 and 2025 on the North Bullfrog deposit followed by Silicon and Merlin, including Lynnda Strip.

Orogen Royalties boasts a strong cash position with over $9 million on hand. The company expects to become cash-flow positive in 2022. The company also has a tight share structure with 177.1 million shares outstanding, including 23 million warrants and 5.4 million options.

Exploration and development have been conducted on its joint venture projects since the company’s inception; joint venture partners have funded over $65M on Orogen’s exploration projects. Drilling programs have also been completed on the Ermitaño and Silicon Gold projects. 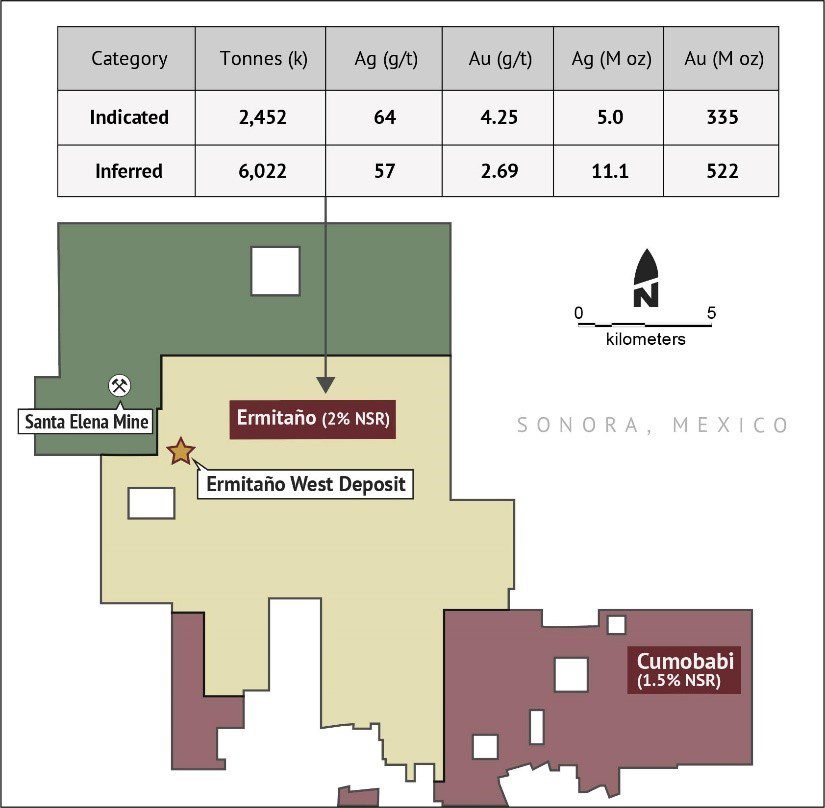 The project is owned by First Majestic Silver Corp. In 2018, First Majestic Silver entered into an option agreement with Orogen Royalties to acquire a 100 percent interest in Ermitaño and paid US$1.5 million for a 2 percent NSR royalty. As a result, the company was able to complete over US$500,000 in exploration expenditures in the first year and delivered a production notice specifying mine and construction plans with accompanying permits.

First Majestic strongly believes that the size of the resource has the potential to continue increasing with further exploration, particularly to the east of the Ermitaño ore body. Orogen believes the project is near-term revenue and may provide revenue for at least eight years. The company has already completed a drilling program in 2020. The pre-feasibility study on the property and initial production are expected at the end of 2022.

The Silicon Gold project is located in the Southwest Nevada Volcanic Field on the western margin of the Timber Mountain caldera in Nevada. The Silicon project is currently at medium-term development and is expected to be a long-term asset for AngloGold Ashanti. The property features multiple historic pits and underground mines. Over 28,000 metres of drilling has been completed on the property to date which has targeted structural zones. The company is permitted to construct 109 drill sites under the phase 1 permit and plans to expand the drilling program in 2021.

AngloGold Ashanti’s conceptual development plan for the district envisions North Bullfrog being developed first, with production in the next three to four years, followed by Silicon, Merlin (including Lynnda Strip) and Mother Lode.

Orogen Royalties strongly believes that any one of its joint ventures has the potential for an economically significant discovery. The company’s joint venture portfolio includes active exploration and development as well as future drilling plans.

Paddy Nicol has over 25 years of experience in public company management serving on the boards of Abacus Mining Corp., Redstar Gold Corp., Niblack Mining Corp., Cobre Exploration Ltd., and Spanish Mountain Gold. Before joining Orogen, Nicol was the President and CEO of Niblack Mining Corp. which successfully merged with Committee Bay Resources in 2008. During his tenure, Nicol developed an extensive network of contacts throughout the institutional and retail investment community. Nicol was the president & CEO of Evrim Resources before it merged with Renaissance Gold to form Orogen Royalties.

Justin Quigley is an internationally experienced business development executive with multi-commodity expertise in the natural resources sector. Most recently he served as vice president for Rio Tinto Exploration in the Americas with the responsibility of formulating and executing commercial strategies for acquisitions and divestments. Before this, Quigley served in various legal roles for Rio Tinto Exploration and Placer Dome, including general counsel for Rio Tinto Exploration North America and Kennecott Minerals Company where he managed the legal and commercial affairs of these companies. Quigley also serves as a director of a private Canadian nature resource company.

Roland Butler was a co-founder, officer and director of Altius Minerals Corporation, a leading diversified mineral royalty company, from 1997 to 2010. He was then president and CEO of Callinan Royalties Corporation, which was subsequently acquired by Altius in 2015. Currently, he is a non-executive director of Millrock Resources which is based in Alaska, Adia Resources in Canada and Aurum Global Exploration which is based in Ireland and active in Europe, Africa and the Middle East. Butler was also co-recipient of the Entrepreneur of the Year Award by the P. J. Gardiner Institute at Memorial University on behalf of Altius Minerals Corporation and is an Honorary Member of the Newfoundland and Labrador Brand of the Canadian Institute of Mining, Metallurgy and Petroleum.

Robert Felder has worked as an exploration geologist and in senior management for major and junior mining companies for the past 35 years. His experience has been largely in Nevada, where he has been directly involved in the discovery or resource development of five gold deposits through technical and leadership roles in exploration. Most notably, he was involved in the Long Canyon deposit with Pittston Nevada Gold, New West Gold and Frontier, and the Twin Creeks, Lone Tree, Trenton Canyon and Valmy deposits with Santa Fe Pacific Gold. For the past 20 years, Felder has served in corporate management and executive positions, where he was involved in corporate financing activities, investor relations, and presenting technical and corporate information to the markets. Most recently, Felder was the president and CEO of Renaissance Gold.

Timothy Janke is a highly-skilled, experienced and award-winning general manager. He has a broad range of expertise in mining operations throughout the USA, Canada and Australia. Janke also has a proven track record of professionalism in leading teams to succeed in start-ups and shut-downs as well as effecting change to improve production, costs and safety performance. In addition, Janke ran the acquisition program for Homestake Mining Corporation in Canada that included evaluation of potential acquisitions and due diligence review for major business transactions. Janke has over 40 years of experience principally in gold operations at Homestake Mining Corporation, Barrick Gold Corporation and most recently at Goldcorp. At Goldcorp, he served as general manager of the Marigold Mine and as a chief operating officer of Pershing Gold. Janke served as a director of Renaissance Gold before it merged to form Orogen Royalties.

Marc Tran is a Chartered Professional Accountant (CPA, CGA) with over 20 years of experience in finance leadership with public organizations. He has completed over $100M of financing for mining projects and is a strategic executive who is experienced in transforming and scaling growth-stage companies. He also has a strong background in project financing, M&A, compliance, regulatory management, corporate governance and marketing. Tran also holds a Bachelor of Commerce in Finance and a Bachelor of Arts in Economics from the University of Calgary.

Rosana Batista is a professional business administrator with over 20 years of experience in corporate and information technology governance. Batista holds a bachelor’s degree in Business Administration. Batista built her career in the information technology area working for international public companies in demand management, process review and budget management. Since 2012 she has been specializing as a corporate secretary. She is a graduate of the Chartered Governance Institute of Canada, awaiting to receive her Chartered Secretary designation.

Marco LoCascio has 14 years of experience as an analyst, fund manager and executive in the metals and mining space. Since 2018 he has been a director and member of the audit committee for Orezone Gold Corporation. Until recently, LoCascio was CEO of Adia Resources, a private diamond exploration company. Previously, LoCascio spent 11 years as an analyst and portfolio manager with Equinox Partners. He focused on the firm’s investments in metals and mining, evaluating exploration, development, production and royalty companies. He received a B.A. in Economics from Amherst College.

Laurence Pryer joined Orogen in 2017 after graduating from the University of Alberta in Canada with a Ph.D. in Economic Geology. He also holds an MA in Earth Sciences from the University of Cambridge in the United Kingdom. Pryer brings his understanding of Northern Cordilleran geology and mineral deposits to Orogen.

Ignacio Camarena has 14 years of experience in mineral exploration, project generation, mapping sampling and both diamond and RC drilling, mainly in porphyry, skarn and epithermal projects. He graduated from the University of Sonora with a Bachelor’s Degree in Geology. He has worked for Orogen since 2013.

The information contained here is for information purposes only and is not to be construed as an offer or solicitation for the sale or purchase of securities. Readers should conduct their own research for all information publicly available concerning the company. Prior to making any investment decision, it is recommended that readers consult directly with Orogen Royalties and seek advice from a qualified investment advisor.