Elements for the Future of Energy

This Azincourt Energy Corp. profile is part of a paid investor education campaign.*

Azincourt is developing its portfolio of uranium properties to fulfill the growing demand for clean energy sources. The World Nuclear Association is predicting that 25 percent of the world’s energy supply is going to come from nuclear plants by 2050. As of July 2018, 453 nuclear reactors were in operation and 57 reactors were down for maintenance. The vast number of reactors in the world are creating a demand for new sources of uranium, as approximately 85 percent of the world’s supply is met by mining.

In addition, recent production cuts by uranium giants Cameco (TSX:CCO) and KazAtomProm (FWB:0ZQ), and new buyers like uranium fund Yellow Cake (LSE:YCA), have begun to exert significant influence on the spot price, which saw a dramatic 40 percent increase in the last calendar year.

Azincourt has the option to acquire a 70 percent interest in the East Preston project, a joint venture with partner Skyharbour Resources (TSXV:SYH) and Clean Commodities Corp (TSXV:CLE). The property consists of over 25,000 hectares of the eastern portion of the Preston project, one of the largest tenure land positions in the Patterson Lake region. Orano Canada (Areva) has optioned nearly 50,000 hectares of the Preston project, and recently completed a $2.2 million work program The Patterson Lake region also hosts the high-grade Arrow, Triple R and Spitfire uranium deposits.

Azincourt’s 2019 drill program at East Preston was able to confirm the prospectivity of the project as the basement lithologies and graphitic structures intersected appear to be analogous to the Patterson Lake South-Arrow-Hook Lake-Spitfire uranium deposit host rocks and setting. The company is currently planning its 2019-2020 winter drill program.

Azincourt completed a mapping and sampling program at the three properties aimed at identifying exploration targets for future drilling. Rock chip samples from the program returned up to 8,061 ppm uranium and 11 of the samples returned over 1,000 ppm uranium from the Escalera property, making it a priority for the company moving forward.

Azincourt Energy is managed by a team of proven mining professionals with a successful track record in building resource companies and identifying opportunities to increase shareholder value.

The East Preston uranium project covers 25,329 hectares in the southwestern portion of the Athabasca Basin. The project is a part of Skyharbour’s 121,249-hectare Preston property, one of the largest tenure land positions in the Patterson Lake region. Preston is located to the south of and adjacent to NexGen Energy’s (TSXV:NXE) Rook 1 project, which hosts the high-grade Arrow deposit, and proximal to Fission Uranium Corp.’s (TSX:FCU) Patterson Lake South project, which hosts the high-grade Triple R deposit. 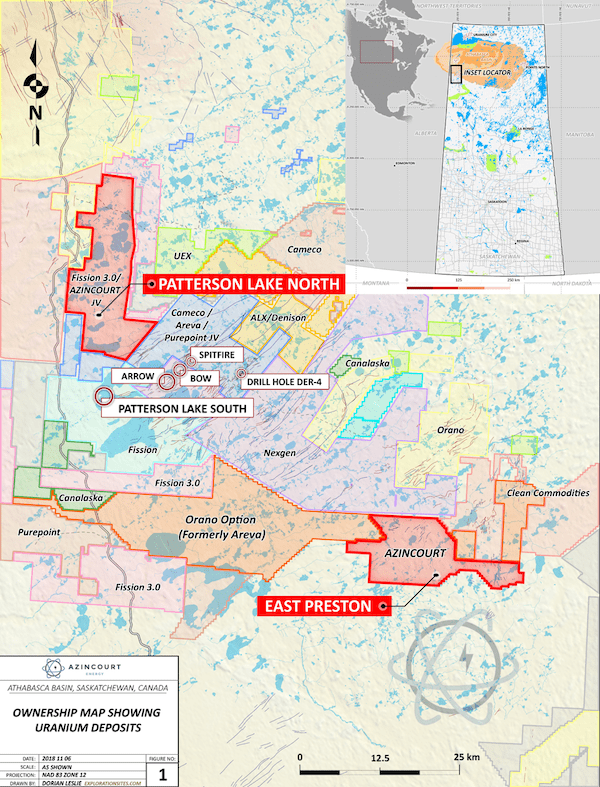 Preston also shares its prestigious mining district with the Hooke Lake project (Spitfire), a JV between AREVA, Cameco and Purepoint. AREVA recently optioned nearly 50,000 hectares of the Preston project for up to $7.3 million in exploration expenditures.

More than C$2 million in exploration spending has gone into the East Preston project since 2013 including airborne electromagnetic (VTEM) and magnetic and radiometric surveys. The work resulted in the identification of three prospective conductive, low magnetic signature corridors with a total strike length of over 25 kilometers. EM conductor trends were discovered for each corridor.

Ground prospecting and sampling identified key pathfinder elements for unconformity uranium deposit discovery. Only one of the corridors has been drilled to date.

Azincourt has been following up on previous exploration work at East Preston with a geophysical exploration program. The work program has included re-logging and sampling of the seven diamond drill holes completed in 2014, with additional ground electromagnetic survey work and ground gravity planned along the airborne conductive trends. The company has also conducted 50-line kilometers of horizontal loop electromagnetic (HLEM) and ground gravity surveys across the property. This has generated a number of priority targets and the company is in the process of further interpreting the survey work.

Azincourt scheduled a winter work program for the property in late 2018 which is expected to include approximately 2,500 meters of drilling to test several high-priority targets. The targets were identified in a geophysical exploration program that was completed earlier in the year.

Azincourt has also planned a 489-line-kilometer VTEM survey over the southeastern portion of the property to complete survey coverage over the entire project area. The survey added an additional 7.5 kilometers to 10 kilometers of data along two prospective conductive trends. The survey shows that there are offset breaks in the conductive trends with multiple, discreet conductors interpreted. This resulted in seven target areas being added to Azincourt’s drill program.

Drilling at East Preston commenced in March 2019 and was able to confirm the prospectivity of the project as the basement lithologies and graphitic structures intersected appear to be analogous to the Patterson Lake South-Arrow-Hook Lake-Spitfire uranium deposit host rocks and setting. Due to the rapid onset of spring breakup which necessitated the use of helicopters, a  total of 552 meters were drilled over the course of the program.

Azincourt is currently preparing for its winter 2019-2020 drill program. The program is expected to include between 2,000 meters and 2,500 meters of drilling over high-priority target zones. The company plans to target basement-hosted unconformity-related uranium deposits. The Company has institutional support and is currently well financed to complete this winter’s planned drill program.

In September 2018, Azincourt entered into a definitive property option agreement with 1177865 B.C. Ltd. to acquire three uranium-lithium exploration projects in the Puno region in southeastern Peru. The acquisition includes the 5,500-hectare Escalera project, the 899.97-hectare Lituania concession and the 999.97-hectare Condorlit concession. The projects are accessible year-round via paved and dirt roads and a national airport is located approximately 130 kilometers to the south. These properties have been collectively named the Escalera Group. 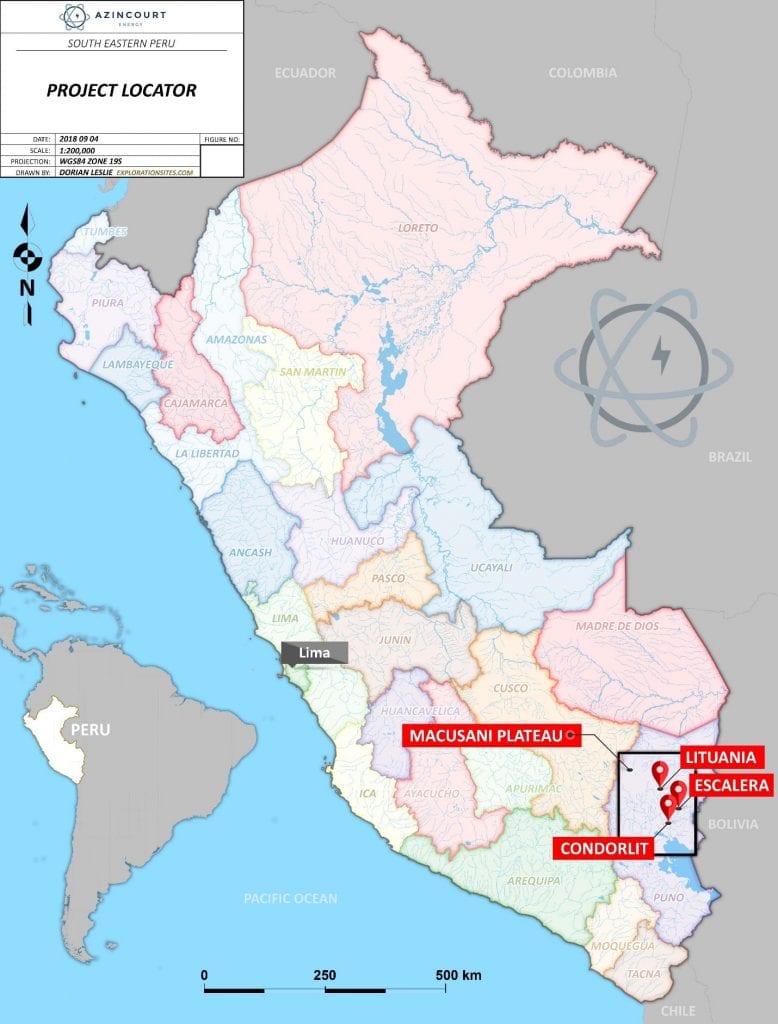 The projects are located in the Macusani-Crusero-Picotani volcanic fields, which have seen uranium exploration since the 1980s. A report released by the International Atomic Agency examined the Macusani-Crusero-Picotani area and stated that: “the large Crucero to Picotani basin, although having less well exposed occurrences may have more potential. Isolated outcrops of the volcanic sequence around the rim of the basin may have been available both during sedimentation and later basin evolution, leading to the accumulation of significant deposits.”

Results from the initial work program were released in January 2019. Through the program, Azincourt was able to identify two new uranium targets that are approximately 4.5 kilometers and two kilometers long, respectively on the Escalera property. Rock grab samples from the Escalera property yielded up to 8,061 ppm uranium and 11 of the samples returned over 1,000 ppm uranium.

Alex Klenman brings over 30 years of business development, marketing, finance, media and corporate communications experience. He has held senior management positions in both the public and private sectors. Klenman is currently Chairman & COO of Nexus Gold Corp, a position he has held since December 2014. Prior to that he was Vice-President, Corporate Finance of Columbia Star Resources, the pre-cursor to Nexus Gold, from 2010-2014, and Vice-President, Communications, for Falcon Point Capital Partners, a firm that provided finance, communications and marketing initiatives for TSX Venture listed resource companies, including Roxgold Inc., Forum Uranium, Integra Gold, Midnight Sun Mining and others. Klenman also spent ten years in broadcasting, which included notable board positions with CKVU Television and Canwest Pacific Television in Vancouver.  In this role, he was directly involved in the development of corporate strategies and policies that produced $25 million in annual revenue.

Paul Reynolds is a professional geologist with over 24 years’ experience working in Canada, USA, Bolivia, Argentina and Guyana. He specializes in the conception and management of mineral exploration ventures. Reynolds holds a B.Sc. degree from the University of British Columbia. He is a member of the Association of Professional Engineers and Geoscientists of the Province of British Columbia since 1992, a fellow of the Geological Association of Canada, and a member of the Society of Economic Geologists.

Reynolds has 16 years’ experience managing public companies as both a director and/or executive officer. He is President, CEO and director of Central Resources Corp and is the former Chairman, CEO/CFO and a director of Athlone Energy Ltd., which was sold to Daylight Energy Ltd. in September 2008. He is also a director of Petro One Energy Corp., Happy Creek Minerals Ltd. and TerraX Minerals Inc.

Ted O’Connor is a Professional Geoscientist with over 22 years of experience, predominantly in the uranium exploration industry. He spent 19 years with Cameco, one of the world’s largest uranium producers. Most recently, he was a Director of Cameco’s Corporate Development group where he was responsible for evaluating, directing and exploring for uranium deposits throughout North America, Australia, South America and Africa.

O’Connor successfully led new project generation from early exploration through to discovery on multiple unconformity uranium projects. He was also responsible for opportunity evaluation, acquisition and for managing Cameco’s exploration partnerships aimed at growing and diversifying Cameco’s exploration portfolio in new jurisdictions and other uranium model types. Prior to joining Cameco, he was an exploration field and underground mine geologist for major mining companies and junior explorers searching for gold, diamonds and base metals.

Vivien Chuang is a Chartered Professional Accountant with several years of experience in the resource and mining sector. She worked at PricewaterhouseCoopers LLP from 2006 to 2010 and Charlton & Company from 2010 to 2011. Currently, she is the President of VC Consulting Corp. which provides CFO and other financial accounting and compliance services to a number of companies. She holds a Bachelor of Business Administration degree from Simon Fraser University.

*Disclaimer: The profile provides information which was sourced and approved by Azincourt Energy Corp. in order to help investors learn more about the company. Azincourt Energy Corp. is a client of the Investing News Network (INN). The company’s campaign fees pay for INN to create and update this profile page, to which links are placed on Investingnews.com and channel newsletters.