Gold Exploration in the Cadillac Break

Renforth Resources (CSE:RFR) is a resource exploration company that owns a collection of five properties located in Canada, including four properties situated on the Cadillac break in Quebec. Renforth also owns the Nixon-Bartleman gold project located 45 kilometers outside of Timmins, Ontario. Renforth Resources’ two primary properties, New Alger and Parbec, are both gold-bearing and cover approximately three kilometers of the Cadillac break.

The Cadillac break, where the majority of Renforth’s properties are located, is a region that has hosted major initiatives in the Canadian mining scene including the Agnico Eagle (TSX:AEM,NYSE:AEM) LaRonde mine, the old O’Brien mine now owned by Radisson Mining (TSXV:RDS) and the Canadian Malartic mine, a joint venture between Agnico Eagle and Yamana Gold (TSX:YRI,NYSE:AUY). The structure hosts an estimated 45 million ounces of gold and due to its history as a mining jurisdiction, the area is supported by infrastructure including roads, power and existing processing facilities. 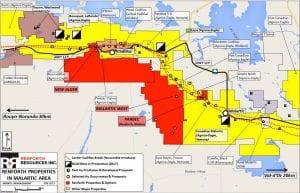 Initial exploration of the two primary properties has shown promising results. The New Alger project has a NI 43-101 inferred resource of 237,000 ounces at a grade of 2.1 g/t gold in one of its zones and the company is optimistic about growing that resource. The Parbec project includes an inferred resource of 656,875 ounces of gold grading 2.33 g/t gold and an indicated resource of 37,224 ounces of gold grading 3.47 g/t gold. Renforth will be continuing its exploration efforts with the aim of extending the strike length and increasing the resource further.

Renforth has a tightly-held share structure, with management holding seven million shares and significant shareholders owning another 10 million to 15 million shares. The company boasts a sophisticated group of shareholders with deep insight into the junior mining space.

The company’s management team is supported by a board of directors with vast experience in both the mining and finance industries, bringing a wealth of knowledge to the company.