Developing the East Preston Uranium Project in the Athabasca Basin

This Azincourt Energy profile is part of a paid investor education campaign.*

The uranium market is on the rise. Market research expects global demand for the mineral to continue to grow in the coming years, with more than a dozen nuclear reactors slated to come online, followed by steady rollouts.

These changes in the energy space pose great growth opportunities for junior companies. As the market expects price adjustments for uranium to accommodate a limited supply and growing demand, companies developing uranium assets could be an integral part of producing the building blocks of energy futures. 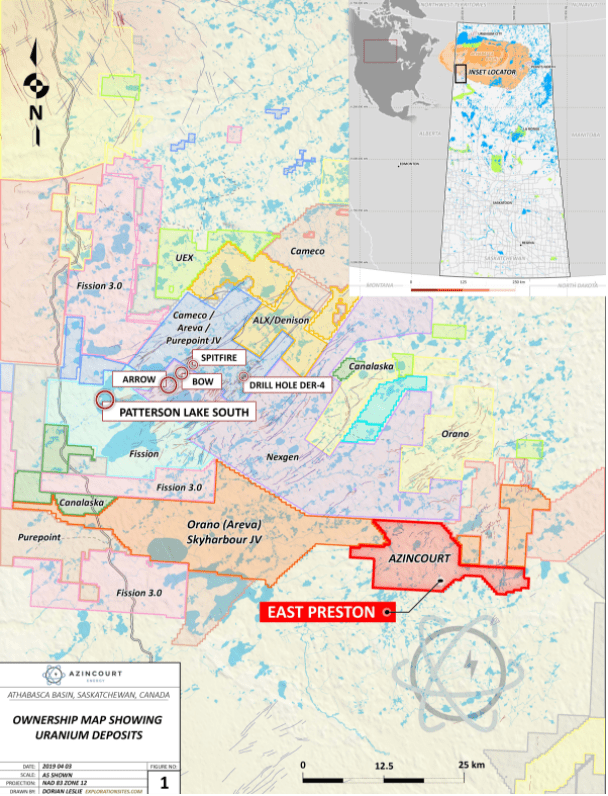 The company’s joint venture partners for the East Preston uranium project include Skyharbour Resources (TSXV:SYH) and Dixie Gold (TSXV:DG), both with 15 percent ownership. Azincourt controls a majority interest of 70 percent in the asset, having spent C$2.5 million on the project and paid C$1 million in cash payments since 2017.

The surrounding Athabasca Basin region is a world-class district with the largest, highest grade uranium deposits in the world. The property leverages a rich uranium mining history, a stable political climate and pro-mining policies on the federal and provincial government levels.

The East Preston project is adjacent to NexGen Energy (TSX:NXE), which has a market cap of C$1.69 billion, and Orano, the second largest uranium producer in the world. The overall area surrounding the property contains over C$10 billion in market capitalization.

In Peru, Azincourt’s Escalera Group property consists of three concessions: Escalera, Lituania and Condorlit. They cover a combined area of 7,400 hectares of prospective exploration targets for volcanic-hosted supergene/surficial uranium and lithium on the Picotani Plateau in the Puno district of Southeastern Peru.

The properties are located in a mineral-rich district where mining giants like Minsur and Rio Tinto operate alongside growing mid-tiers and juniors like Bear Creek Mining and Plateau Energy Metals.

The flagship East Preston uranium project covers over 25,000 hectares in the western Athabasca Basin, Saskatchewan, a premier location for uranium mining. The property consists of a large inventory of priority drill targets identified within 25 kilometers of prospective exploration corridors. Over C$3 million in exploration expenditures has been spent on the project over the past three years.

Groundwork in 2018 returned samples as high as 8,061 ppm uranium and delineated over 6.5 kilometers of prospective trends. A geophysical program the same year completed 51 kilometers of grid preparation and 46 kilometers of horizontal loop electromagnetic to identify multiple shallow conductive systems across the property. These targets point to potential basement-hosted unconformity uranium deposits.

In March 2021, the company announced its 2021 winter exploration program had ended ahead of schedule. Warm weather and unseasonably limited snowfall helped fast-track development and push project advancement further. Azincourt is excited for the future of this project.

The 2018 ground geophysical program confirmed the interpretation of the previous airborne data and has yielded drill targets within previously untested corridors. Another 2021 drill campaign is underway with a planned 12 holes up to 2,500 meters and a diamond drill program targeting its conductive corridor.

The Escalera Group covers 7,400 hectares located in the Macusani-Crucero-Picotani volcanic field of Puno, southeast Peru. The project leverages the district’s mining-friendly conditions and reputation as an emerging uranium-lithium district with a strong base metal presence.

Historical samples taken from the Escalera project have yielded values of up to 6,812 ppm uranium. Additionally, a 2017 sampling program produced values up to 3,560 ppm uranium and 153 ppm lithium with 2018 samples returning as high as 8,061 ppm uranium. The sampling has identified two new prospective uranium areas measuring a combined 6.5 kilometers. 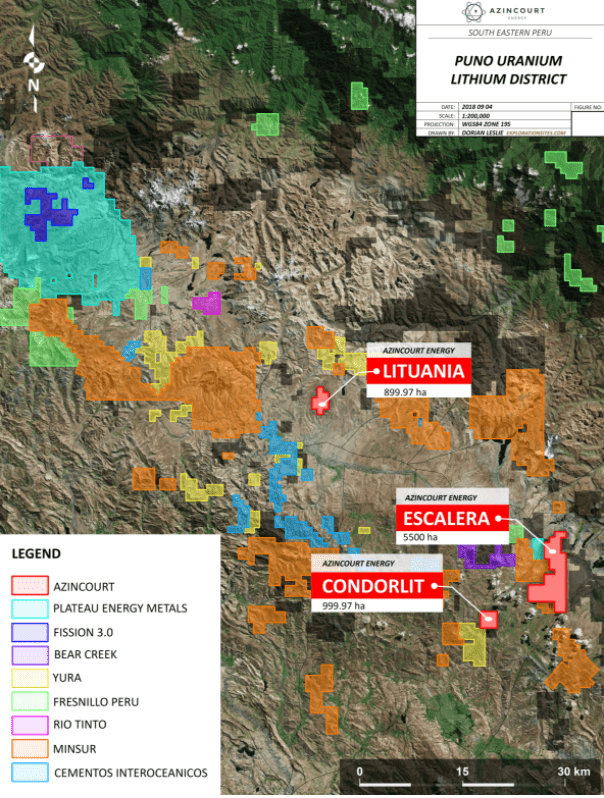 The proposed uranium mineralization at Escalera is similar to that found at the Macusani uranium deposit held by Plateau Energy Metals, which reported a measured and indicated resource of 52.9 million pounds of uranium and an inferred resource of 72.1 million pounds. Azincourt intends to continue its exploration and rock analysis of the asset.

Alex Klenman has served as president and CEO of Azincourt since July of 2017. He brings over 30 years of business development, marketing, finance, media and corporate communications experience. Klenman has held and currently holds senior management and board positions in both the public and private sectors, including the CEO position of Nexus Gold Corp., CEO of Leocor Ventures and director of Corporate Development for Arbor Metals Corp. From 2010 to 2014, he was VP of Communications and partner with Falcon Point Capital Partners, a firm that provided finance, communications and marketing initiatives for TSX Venture listed resource companies. Klenman also spent 10 years in broadcasting, which included notable board positions with CKVU Television and Canwest Pacific Television in Vancouver.

C. Trevor Perkins is a professional geologist with wide-ranging experience in planning and executing mineral exploration programs and managing exploration teams. He brings a proven track record of discovery and results from a successful 25 year career in mineral exploration in some of the world’s most prolific mining regions.

For the past five years, Perkins held the title of exploration manager for UEX Corporation, responsible for overseeing exploration in the Athabasca Basin, Saskatchewan. As a Qualified Person for UEX’s uranium and cobalt projects, he was responsible for several 43-101 technical reports and resource estimates for both the Christie Lake and West Bear projects. Also, he managed the team that made the Ōrora Uranium Deposit discovery in 2017.

Paul Reynolds is a professional geoscientist with over 30 years of experience working in Canada, the US, Bolivia, Argentina and Guyana. He specializes in the conception and management of mineral exploration ventures. He has 25 years of experience managing public companies as both a director and executive officer. Reynolds was formerly the chairman of Athlone Energy Ltd., which was sold to Daylight Energy Ltd. in September 2008. He is the president and CEO of Triumph Gold Corp. He is also a director of Cairo Resources Inc., Fremont Gold Ltd. and TerraX Minerals Inc.

Ted O’Connor is a professional geoscientist with over 25 years of experience, predominantly in the uranium exploration industry. He spent 19 years with Cameco, one of the world’s largest uranium producers. He was a director of Cameco’s Corporate Development group where he was responsible for evaluating, directing and exploring uranium deposits throughout North America, Australia, South America and Africa. O’Connor successfully led new project generation from early exploration through to discovery on multiple unconformity uranium projects. O’Connor was also responsible for opportunity evaluation, acquisition, and managing Cameco’s exploration partnerships to grow and diversify Cameco’s exploration portfolio in new jurisdictions and other uranium model types. Most recently, he was the CEO of Plateau Energy Metals, where he oversaw the development of the Macusani uranium and lithium deposits and is now a director and technical advisor to the company.

Vivien Chuang is a Chartered Professional Accountant with several years of experience in the resource and mining sector. She worked at PricewaterhouseCoopers LLP from 2006 to 2010 and Charlton & Company from 2010 to 2011. Currently, Chuang is president of VC Consulting Corp., which provides CFO and other financial accounting and compliance services to several companies. Chuang holds a Bachelor of Business Administration degree from Simon Fraser University.

The information contained here is for information purposes only and is not to be construed as an offer or solicitation for the sale or purchase of securities. Readers should conduct their own research for all information publicly available concerning the company. Prior to making any investment decision, it is recommended that readers consult directly with Azincourt Energy and seek advice from a qualified investment advisor.