This Atico Mining profile is part of a paid investor education campaign.*

Volcanogenic massive sulphide (VMS) deposits are some of the world’s most prosperous base metal and precious metal deposits. This type of deposit is found across the globe, and often forms in clusters. The oldest known VMS deposits date back three billion years, and new ones are still being formed. VMS deposits have impressive mineralization and high grades, but only 2.2 percent of world gold production and 6 percent of copper production currently comes from VMS deposits.

Atico Mining (TSXV:ATY,OTC:ATCMF), operating in Colombia and Ecuador, has two projects that are VMS style surrounded by large land packages. Such strategic positioning gives Atico the potential to mimic successes seen with the Fortuna Silver Mines (TSX:FVI,NYSE:FSM), a company with an estimated market cap of US$2 billion that was founded by the team currently leading Atico.

“We have a very strong production profile along with a pipeline of growth prospects for a small company. And we generate a robust free cash flow from which we can finance all of our exploration plans,” commented Igor Dutina, the company’s Corporate Development lead.

The stable mining jurisdictions of Latin America have proven to be a premier place for acquisition and mining development for Atico. The company is also looking at avenues of growth in the possible acquisition of a third project.

The company’s flagship El Roble mine in Colombia has proven to be an extremely valuable asset. The gold-copper mine generates roughly 21 million pounds of copper and 11,000 ounces of gold per year with a life of mine of about four years. This VMS asset primes the company to achieve the mid-tier producer level Atico intends on reaching. 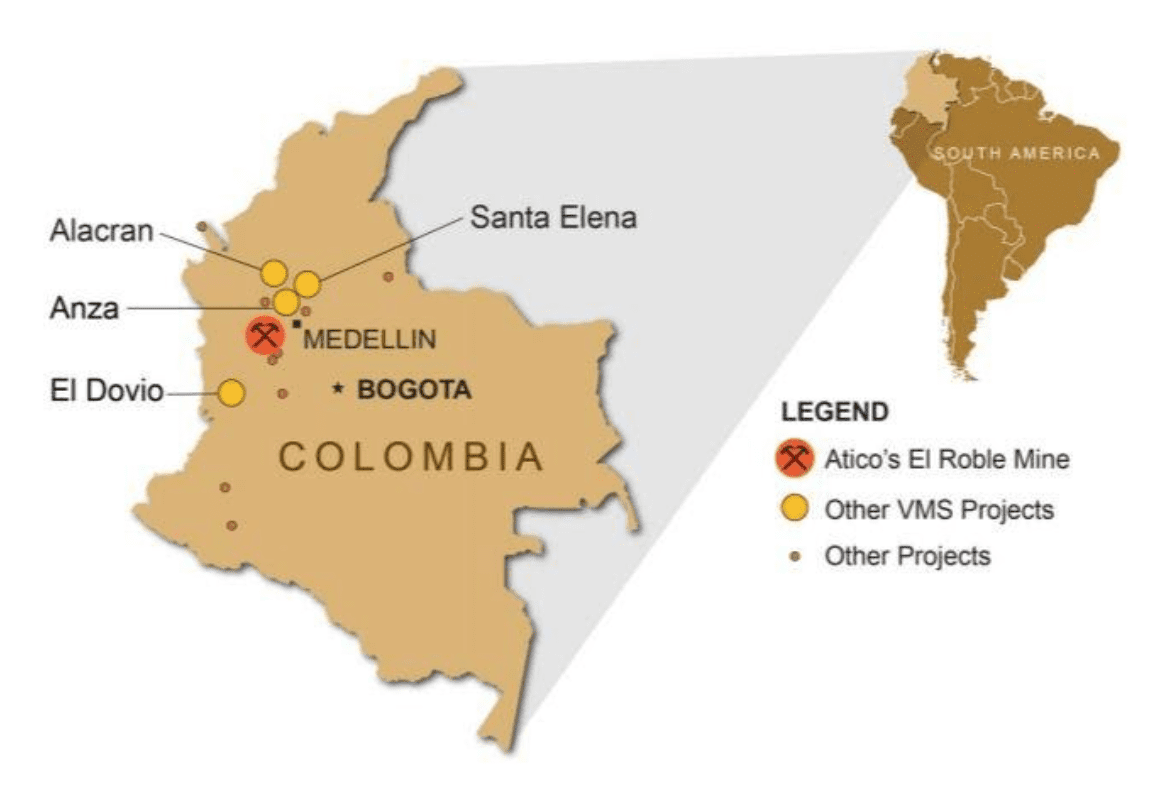 The company’s second asset, the La Plata project in Ecuador, is a pre-development stage asset with a mineralized profile containing high-grade gold, copper, zinc and silver. Past exploration campaigns and a completed PEA have also aided in pushing along this highly prospective asset’s advancement. With 60 percent ownership of the project and an earn-in option of up to 75 percent, the future of La Plata has tremendous exploration and development potential.

In December 2020, Atico Mining announced the closing of US$6.5 million of its unsecured convertible debenture private placement. This news follows its report announcing US$5 million in income from mining operations a month earlier. The company intends to use funds and proceeds from the offering to further advance its La Plata project, including a full feasibility study delivered by mid 2022.

Atico Mining has a world-class team of mine developers and mine operators. With several generations of mining in Latin America and extensive experience in the industry and regional networking sectors, this team understands the mining industry. Moving into 2021, Atico intends to generate significant cash flow at the El Roble mine and explore its highly prospective VMS targets.

Atico’s El Roble mine is the only copper mine currently in production in Colombia. Under-explored until 1990, the 6,355 hectare asset has processed approximately 1.8 million tonnes of primarily pyrite-chalcopyrite ore with an average grade of 2.67 percent copper and an approximate grade of 2.63 g/t gold.  Currently, the mine has an 850 tonne per day throughput capacity and 15 prospective geochemical VMS exploration targets that extend over 10 kilometers across the property. 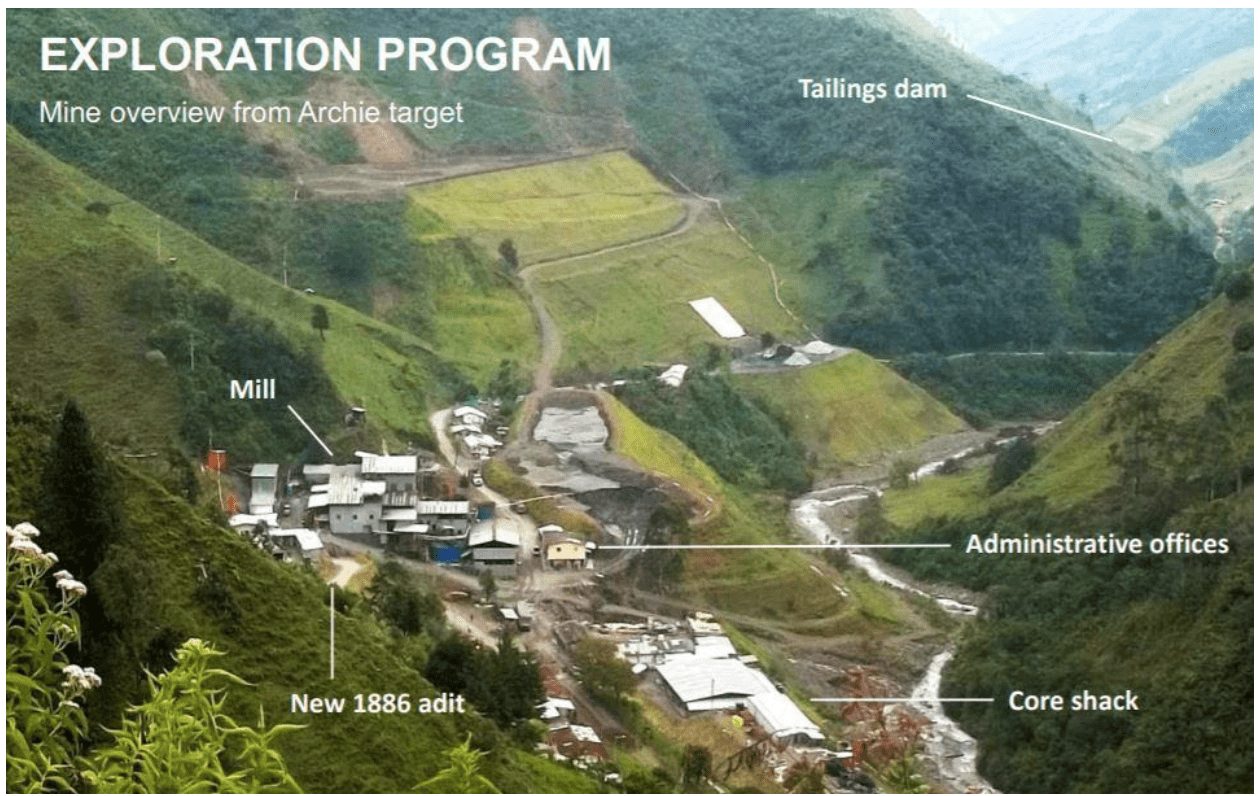 The land package, which is located in Carmen de Atrato, also leverages a strategically positioned infrastructure with proximity to paved roads, a power grid and established mine and plant facilities on site. As of January 2021, the company owns 90 percent of the operating mine and surrounding claims.

Future plans for the project include a continued focus on drilling into recently discovered resources and mineralization exploration along the strike’s depth. With the impressive cluster profile of VMS deposits, El Roble has the potential to generate significant cash flow and shareholder returns for the company as production advances. The current available free cash flow stands at approximately US$13 million.

This pre-development asset hosts the characteristic VMS cluster profiling which reinforces the prospect of further nearby deposits and significant exploration potential. Currently, La Plata has prospective resources of 1.9 million tonnes at 12.9 grams per tonne gold equivalent mineralization. Historic resources based on past drilling campaigns are estimated at 913,977 tonnes graded at 8.01 g/t gold and 5.01 percent copper. High-grade silver, lead and zinc have also been found along the over 9 kilometers of favorable strike geology on the property.

Atico Mining has been quick to begin exploring and developing this exciting project after its acquisition in late 2019. By 2022, the company intends on completing a full feasibility study for the project and to prepare the asset for the initial development of prospective targets.

Fernando E. Ganoza has over 15 years of management experience in Latin America, including key roles in developing mines in Peru and Mexico as the project manager and country manager for Canada-based producer Fortuna Silver Mines Inc.

He has strategic planning and business development experience with Cargill, at which he participated in the valuation and structuring of deals with a cumulative value of over US$350 million. Fernando holds a BSc. in Mining Engineering from the Universidad de Antofagasta in Chile and an MBA from the Darden School of Business at the University of Virginia.

Luis D. Ganoza B.Sc. Engineering, MBA, M.Sc.—Chairman of the Board

Luis D. Ganoza has held the position of CFO in Fortuna Silver Mines Inc. since 2006 and has over 12 years of experience in the financial management of public mining companies. He has participated in debt and equity financings for mining projects in Peru and Mexico for over C$120 million. Luis has a B.Sc. in Mining Engineering from the Universidad Nacional de Ingenieria in Peru; an MBA from ESAN, a Tier 1 Latin American Business School; and an M.Sc. in Accounting and Finance from The London School of Economics.

Jorge Ganoza has over 40 years of experience in the Latin American mining industry, holding senior leading roles in the founding and development of private and public mining companies.

For the past six years, he has held the position of VP of Operation in Fortuna Silver Mines Inc. Jorge has a B.Sc. in Engineering from the Universidad Nacional La Molina and also completed advanced finance studies at the Escuela Superior de Administration, ESAN, in Peru. Jorge is a third-generation miner from a Peruvian family that has owned and operated underground gold, silver and base metal mines in Peru and Panama.

Alain Bureau has over 25 years of leadership in project management, operating in North and Latin American countries gained through notable projects including mines in Peru, Chile, Mexico, Panama and Canada.

Joseph A. Salas has 20 years of experience in exploration, mine geology, project evaluation and development with vast expertise in gold-copper and copper-molybdenum porphyries in Colombia and Peru.

For the past three years, he has held the position of Exploration Country Manager in Colombia for Barrick Gold Corporation. From 1996 to 2002, he worked in various exploration positions of increasing responsibility for Anglo American. Joseph has a B. Sc. in Geological Engineering from the Universidad Nacional de San Agustín de Arequipa in Peru and is affiliated with the Society of Economic Geologists Inc.

Bill Tsang is a Chartered Professional Accountant with a Bachelor of Commerce from the University of British Columbia and more than 10 years of financial accounting and auditing experience in the mineral exploration and mining industry.

Before joining Atico Mining, he worked in public practice providing professional services and advice to publicly traded companies on the NYSE, TSXV, and OTC markets on various public reporting services, such as Qualifying Transactions for Reverse Take-Over, mergers and acquisitions and financing transactions. Bill’s services are provided to the company pursuant to the Corporate Services Agreement.

Igor Dutina has an extensive background in financial and capital market analysis, with more than 12 years of experience in the mineral exploration and mining industry, working with several publicly listed companies.

The information contained here is for information purposes only and is not to be construed as an offer or solicitation for the sale or purchase of securities. Readers should conduct their own research for all information publicly available concerning the company. Prior to making any investment decision, it is recommended that readers consult directly with Atico Mining and seek advice from a qualified investment advisor.