Canadian Palladium Resources Inc. (CSE:BULL,FWB:DCR1,OTC:DCNNF) is an exploration company focused on the acquisition and development of palladium, copper and cobalt assets. Both metals are critical to the vehicle industry. Presently, there is an acute shortage of palladium, which is used for catalytic converters in today’s stringent emission control environment. Additionally, cobalt is a critical element in the ever-growing electric vehicle (EV) industry, most notably in EV batteries and associated charging stations.

Adding to the company’s presence in Ontario, Canadian Palladium has also acquired the 6,000-hectare Agnew Lake palladium project. The property is considered to be part of the larger East Bull-Agnew Lake mafic-ultramafic complex. The company believes that the mineralization from its East Bull project could extend onto the Agnew Lake property and intends to include the property as part of its ongoing exploration program at East Bull.

Canadian Palladium’s management team has an extensive background in financing publicly and privately-traded mining and exploration companies. The team’s experience is complemented by the company’s advisors and board members, all of whom have extensive experience in mining and exploration. Several of the members of Canadian Palladium’s board were involved in the successful exit of US Cobalt Inc. in an all-share deal valuing USCO at $150 million. USCO and its Idaho cobalt property were sold to First Cobalt Corporation (TSXV:FFC) in 2018.

The Rising Demand for Cobalt

Cobalt is an integral component in lithium-ion batteries, which can be found in many electrical devices such as smartphones, solar and wind energy storage, laptops and more. Cobalt is also used as a superalloy for hard metals used in manufacturing, ceramics and pigments and in other chemical applications.

However, cobalt’s most important application has been in the EV market. The International Energy Agency is forecasting that EVs will grow from three million in 2018 to 125 million by 2030. The market’s growth is being driven by clean energy initiatives adopted by countries across the globe, but especially in Europe and China.

In order to meet the demand placed on battery manufacturers, battery megafactories will need to increase their output significantly. To put this into perspective, the 2017 lithium-ion megafactory capacity was estimated at 100-gigawatt-hours and is expected to reach 998-gigawatt-hours by 2018.

Despite the rising demand for cobalt, there are a few obstacles the industry must overcome in order to meet the demand. The first and foremost of these is ethically-sourced cobalt. Currently, the Democratic Republic of Congo is responsible for producing approximately 66 percent of the world’s cobalt. However, the country has been linked to child labor, human rights abuse and environmental issues as well as being politically-unstable and conflict-ridden.

This has caused concerns about securing steady and ethically-sourced supplies of cobalt. In early November 2018, for example, Glencore (LSE:GLEN) and Katanga Mining (TSX:KAT) had to suspend its operations due to high uranium concentrations in the ore they’ve been extracting at the Kamoto mine. The company expects to resume its operations sometime next year.

Companies such as Tesla (NASDAQ:TSLA) have also begun looking at alternative battery chemistries with the idea of reducing the amount of cobalt needed in lithium-ion batteries. According to various sources, this is not about to change anytime soon. Benchmark Mineral Intelligence believes that the use of the 811 nickel-cobalt-manganese (NCM) battery won’t make much of an impact on the market until sometime after 2021. Additionally, many companies are looking at recycling to help ease the demands of the EV market. Current and near-term recycling technology is expected to do little to abate the ever-increasing demands for cobalt.

In February 2019, Canadian Palladium acquired the 992-hectare East Bull palladium property in the Gerow township in Ontario, Canada. The property is located 90 kilometers west of Sudbury and 480 kilometers west of Ottawa. The project is accessible by all-weather roads that connect to the TransCanada Highway and a rail line resides 24 kilometers to the south. Food, fuel, lodging and a power line are located four kilometers away from the property. 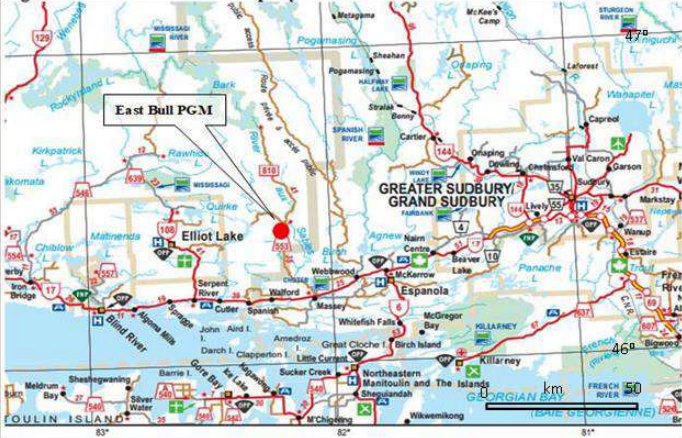 The property has been subjected to historical exploration, such as drilling, surface trenching and geophysics, which have identified significant precious and base metal mineralization in several areas. Canadian Palladium reviewed and tested the historical results to release a NI 43-101-compliant resource estimate for the East Bull project. The report outlined an inferred resource estimate of 11.1 million tonnes of ore grading 1.46 g/t palladium equivalent for a total of 523,000 ounces of palladium.

In June 2019, Canadian Palladium commenced exploration at the East Bull property. The program is expected to include line cutting and detailed mapping. The company intends to follow this up with geophysics, geological mapping and drilling with the aim of increasing the property’s resource. To date, 20 kilometers of line cutting has been completed and 70 grab samples have been collected. Results are pending.

In July 2019, Canadian Palladium acquired the 6,000-hectare Agnew Lake palladium project. The property is located 80 kilometers west of Sudbury, Ontario and is considered to be part of the larger East Bull-Agnew Lake mafic-ultramafic complex. Sudbury is home to Glencore and Vale’s (NYSE:VALE) nickel-copper-platinum group elements mining and smelting operations. The company believes that this acquisition will position it to be one of the larger non-producing palladium explorers in North America.

Canadian Palladium intends to include Agnew Lake as part of its exploration program at East Bull. The company has also initiated a detailed compilation of public and private data on the property. 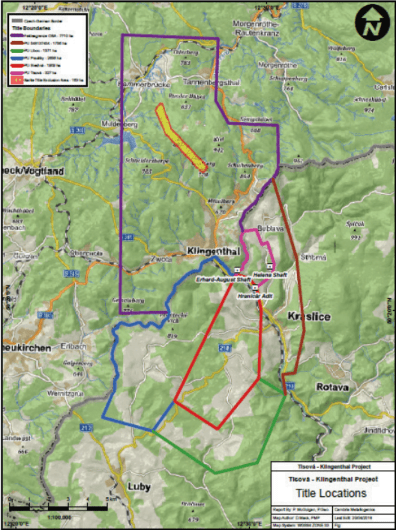 Mining at the property was first recorded in the thirteenth century. By the sixteenth century, it is reported that over 2,000 workers were working in three underground mines and recovered copper grades of five percent copper. The copper produced was smelted locally in several areas in the Tisova valley. Mining in the area also sparked a local industry for the production of copper and brass fabrication and musical instrument manufacturing, the latter of which is still done today.

In 1899, modern-style mining methods were introduced to the area when the Klingenthal-Graslitzer Copper Mining Company was founded. Between 1900 and 1904, the Erhard-August-shaft was sunk to a depth of 100 meters and a 1,813-meter-long cross-cut was established. 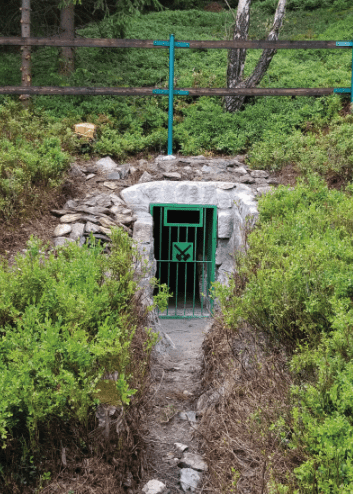 In 1918, the Graslitz region was included in the newly-founded country of Czechoslovakia and the new political environment resulted in the closure of the mill on the Saxon side. Between 1923 and 1929, the buildings and treatment plants that the Klingenthal-Graslitzer Copper Mining Company built were demolished.

As the Communist regime exerted its power in the region, the Czech State Mining Company Operation was established and was in operation between 1959 and 1973. During this time, it is reported that the underground mine produced 560,000 tonnes grading 0.68 percent copper. Between 1959 and 1992, a total of 25,985 meters of surface drilling was completed as well as a total of 14,299 meters of underground drilling.

In 2017, the previous operator on the property completed 1,340 meters of drilling. In total, over 30 kilometers of underground development is available today for further development and exploration. Additionally, historic grab samples were recovered from waste dumps that assayed up to 0.69 percent cobalt, 17.1 percent copper, 3.7 g/t gold and 178 g/t silver. There have also been reports of sulfide zones that have a true thickness of 100 meters with higher-grade copper horizons that have formed lenses of up to five meters wide.

Canadian Palladium has recently completed its first exploration program on the property. The program included a detailed 3D resistivity and chargeability survey, a magnetic survey, structural mapping, 3D modeling and sampling of known showings. The goal of the program was to identify drill targets for use in future exploration programs.

In July 2019, Canadian Palladium commenced exploration on the German side of the property to assess the copper-cobalt potential. The exploration program is expected to include a comprehensive geological data compilation and a field study to evaluate previously identified copper-cobalt anomalies.

Mr. Tisdale has 40 years of experience in investing, financing and consulting to private and public companies in the areas of mining, oil and gas, and agriculture. He runs his own merchant bank and sits on the board of a number of private and public companies. Over his career, Mr Tisdale has raised over $2bn of both equity and debt financing and has been instrumental in founding several highly successful companies, including Rainy River Resources (purchased by Newgold) and Ryland Oil Corporation (purchased by Crescent Point). Most recently, Mr. Tisdale was integral to the successful sale of US Cobalt to First Cobalt Corporation, creating a post-transaction cobalt company valued at almost $400 million.

Ms. Gahagan has been a director of Canadian Palladium Resources Inc. since January, 2011. Ms. Gahagan is currently a director of Moovly Media Inc (TSXV: MVY) and Versus Systems Inc. (CSE: VS). Prior to her involvement in merchant banking, Ms. Gahagan graduated from Queens University Law School and practiced corporate law for 20 years. Ms. Gahagan has extensive experience advising companies with respect to international tax-driven structures, mergers and acquisitions. Ms. Gahagan has successfully completed the Investment Management Certificate course offered by the Financial Conduct Authority (UK). Most recently, Ms. Gahagan was integral to the successful sale of US Cobalt to First Cobalt Corporation, creating a post-transaction cobalt company valued at almost $400 million.

Ms. Chin, a Chartered Professional Accountant, has over 15 years of experience in audit, finance and accounting within the mining, exploration and technology industries. She has served as director and executive officer for several publicly traded companies where she was responsible for all aspects of financial services, financial reporting, corporate governance, and has led numerous financings, mergers and acquisitions to successful completion.

Mr. Clark is a geologist (P Geo) with over 30 years of mineral exploration experience and has held various geological positions with a number of public mining companies. Mr. Clark has extensive experience in managing large scale exploration and development programs internationally including Asia and North America, and has worked extensively in the Hemlo and Wawa districts. He is the Executive Director of the Ontario Prospectors Association (OPA) and currently serves on the Minister of Mines Mining Act Advisory Committee. Most recently, Mr. Clark was integral to the successful sale of US Cobalt to First Cobalt Corporation, creating a post-transaction cobalt company valued at almost $400 million.

Mr. Newall is an experienced senior executive director, having served as a director or executive officer of numerous publicly listed companies. He was Investment Director of Intrepid Financial, an incubator of natural resource companies for eight years. More recently he has been interim CEO of Conversis, one of the UK’s leading language service providers and is Voluntary CEO of Oracle Cancer Trust, the UK’s largest head and neck cancer research charity. Mr. Newall is a graduate of Cambridge University and holds a Masters Degree in Law.

The information contained here is for information purposes only and is not to be construed as an offer or solicitation for the sale or purchase of securities. Readers should conduct their own research for all information publicly available concerning the company. Prior to making any investment decision, it is recommended that readers consult directly with Canadian Palladium Resources Inc. and seek advice from a qualified investment advisor.