Altiplano Metals Inc. (TSXV: APN) (WKN: A2JNFG) ("Altiplano" or the "Company") is pleased to report on the April 2022 operating results from the Farellon Copper-Gold (Cu-Au) mine located near La Serena, Chile.

During the month of April, approximately 3,420 tonnes of mineralized copper-gold material was produced at Farellon and approximately 2,240 tonnes were shipped and processed. Production improved by 34% over the March output of 2,543 tonnes with processed material declining slightly by 4.3% over the previous figure of 2,337 tonnes. The April copper grade at 2.07% improved by 5.6% for the month compared to the copper grade observed in March at 1.96%. The Hugo Decline continues the advance to the 352-level m where a total of 52 m has been completed to date of the expected 65m. Intersection of the new level is expected in early June where mining will commence in NE and SW production sub-drifts.

Revenue generated in April was approximately US$318,900 after processing costs, representing a 4.6% improvement over March's revenue of US$304,795. At April month end, an additional 250 tonnes were stockpiled at site with 2,317 tonnes in process at ENAMI. The revenue from this material will be credited in the following months after processing has been completed. Lower grade stocks of 1,400 tonnes have been shipped to the El Peñón processing facility in advance of startup. In addition, newly mined material will be split shipped between ENAMI and El Peñón to maximize revenue and manage cash flows as the mill prepares to commence operation.

CEO Alastair McIntyre commented "We are pleased to see ongoing grade improvement at Farellon, especially as we advance deeper to the lower working levels. Our previous drilling results highlighted that grade improves with depth and we are observing this in the lower working faces and validated with increased payable copper from processing facility. Our next goal of reaching the 352 m level in the next several weeks is expected to confirm the trend of increasing grade at depth."

To view an enhanced version of Figure 1, please visit:
https://orders.newsfilecorp.com/files/4303/125394_altipl2.jpg

Figure 4. Massive Chalcopyrite and Magnetite on the 360 m level

Note the copper in yellow on the right and left sides of the picture as chalcopyrite. The darker steel grey areas are magnetite which will processed at the El Peñón facility to recover the iron. Vein widths in this location are as much as 8.5 m wide expanding from the 2.5 m average. The driller operating the Jumbo provides the perspective of scale.

Altiplano Metals is a growing gold, silver, and copper company focused on the Americas. The Company has a diversified portfolio of assets that include an operating copper/gold/iron mine, development of near-term producing gold/copper projects, and exploration land packages with district-scale potential. Altiplano is focused on creating long-term stakeholder value through developing safe and sustainable production, reinvesting into exploration, and pursuing acquisition opportunities to complement its existing portfolio. Management has a substantial record of success in capitalizing on opportunity, overcoming challenges and building shareholder value. Altiplano trades on the Toronto Venture Exchange trading under the symbol APN and the Frankfurt Exchange under the symbol A2JNFG.

Altiplano has generated over US$8.83 million (after processing costs) from the recovery and sale of 4.15 million pounds of copper with an average grade of 1.76% Cu (2018 Q1-2022 Q1). Cash flow has been re-invested into equipment, underground drilling, expanding underground development at Farellon, enhancing ventilation to increase productivity and capacity, new underground development and exploration at Maria Luisa, and construction of the near completed El Peñón fit-for-purpose mill and flotation plant located 15 km from the Farellon site.

John Williamson, B.Sc., P.Geol., a Qualified Person as defined by NI 43-101, has reviewed, and approved the technical contents of this document.

Altiplano is part of the Metals Group of companies. Metals Group is an award-winning team of professionals who stand for technical excellence, painstaking project selection and uncompromising corporate governance, with a proven ability to capitalize on investment opportunities and deliver shareholder returns.

To view the source version of this press release, please visit https://www.newsfilecorp.com/release/125394

Processing of stockpiled material currently stored at the El Peñón site has begun as a part of the commissioning of the plant, with the first concentrate expected to be produced for shipment in July. Production from Farellon will be split shipped to the facility and ENAMI for the next few months to maximize copper sales while the plant ramps up to full operational capacity.

Altiplano Reports May 2022 Results at Farellon with Record Monthly Income

Altiplano Metals Inc. (TSXV: APN) (WKN: A2JNFG) ("Altiplano" or the "Company") is pleased to report on the May 2022 operating results from the Farellon Copper-Gold (Cu-Au) mine located near La Serena, Chile.

During the month of May, approximately 3,432 tonnes of mineralized copper-gold material was produced at Farellon and approximately 2,750 tonnes were shipped and processed. A slight improvement is noted in the amount produced in May over April; however, the amount of processed material improved by 23% over the previous figure of 2,242 tonnes observed in April. The May copper grade at 2.0% decreased slightly compared to the previous month observed at 2.07%. The Hugo Decline advance to the 352 m has been completed. This level is expected to be operational in the next two weeks when the SW and NW subdrifts have been completed. These subdrifts will provide operational access to the high grade mineralized zone in NE and SW directions on 2 new working faces.

Altiplano Metals Inc. (TSXV: APN) (WKN: A2JNFG) ("Altiplano" or the "Company") is pleased to provide an update on decline progress and ongoing exploration activities at the Maria Luisa Project (the "Project"), located 100 km north of La Serena within the Atacama region in Incahuasi, Chile. 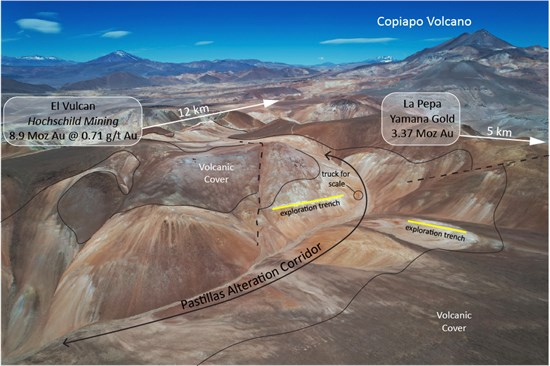 Altiplano Reports On Q1 2022 Results at Farellon with Record Revenue

Altiplano Metals Inc. (TSXV: APN) (WKN: A2JNFG) ("Altiplano" or the "Company") is pleased to report on the Q1 2022 results from the Farellon Copper-Gold-Iron (Cu-Au-Fe) mine located near La Serena, Chile.

During Q1, 2022, the Company extracted a total 10,075 tonnes of mineralized Cu-Au material at Farellon and processed 6,676 tonnes at an average copper grade of approximately 1.99%. Sales of 281,949 pounds of copper generated approximately US$857,238 in revenue (after processing costs) which represents the highest revenue total to date from Q1 2018.

This syndicated article was originally published by the Canadian ETF Market. The Investing News Network (INN) believes it may be of interest to readers; however, INN does not guarantee the accuracy or thoroughness of the information reported by external contributors. The opinions expressed by external contributors do not reflect the opinions of INN and do not constitute investment advice. All readers are encouraged to perform their own due diligence.

The S&P 500 (SPX) and NASDAQ 100 (NDX) continue to tumble amid what is increasingly shaping up to be a bear market. Both indexes are now down 20% or more from their 52-week highs and have pared most of their gains from the low-interest-rate environment and quantitative easing of 2020 – 2021.

North of the border, the Canadian stock market is fairing much better. Year to date, the benchmark iShares S&P/TSX 60 Index ETF (XIU) is down just -3.17%. Much of this outperformance can be tied to the outperformance of the dominant energy sector, thanks to soaring commodity prices caused by inflation and supply chain snags.

However, the energy sector is not the largest on the TSX. That honour goes to the financial sector, which is around 36%. This sector comprises Canadian banks, insurance companies, financial services companies, and asset managers. Given that numerous 50-basis point increases from the Bank of Canada are forecasted, these companies may experience more substantial revenues and earnings due to the higher interest rates they can now charge.

This syndicated article was originally published by the Canadian ETF Market. The Investing News Network (INN) believes it may be of interest to readers; however, INN does not guarantee the accuracy or thoroughness of the information reported by external contributors. The opinions expressed by external contributors do not reflect the opinions of INN and do not constitute investment advice. All readers are encouraged to perform their own due diligence.

Stagflation is a term that has not been used in many decades to describe the economic environment. However, it currently has become a buzzword to characterize our current situation. While it is unclear whether the global economy will experience a meaningful period of stagflation, it is certainly a potential risk. With that in mind, investors may want to arm themselves with the knowledge of what asset classes they may position themselves in to mitigate the negative impacts of stagflation.

Experts: Electrification and Decarbonization Only Achievable Through Mining

Questions around which metals and minerals will be crucial for the global push towards electrification and how the mining sector can adopt robust decarbonization strategies were two of the major themes at the Prospectors and Developers Association of Canada (PDAC) convention earlier this month.

The three day event, which was rescheduled from its usual early March date, returned in person along with a later online component after the 2021 conference was held entirely online.

Marking its 90th anniversary, the conference boasted more than 17,000 attendees, many of whom were investors looking to learn about the mining sector's environmental, social and governance (ESG) efforts. One of the most prevalent topics was decarbonization, which was the focus of several presentations and panel discussions.

Enterprise Group, Inc. (TSX: E) ("Enterprise" or the "Company") announces the voting results of its annual and special meeting of shareholders held on June 23, 2022. The detailed results of the vote are set out below.

THIS ANNOUNCEMENT, INCLUDING THE APPENDIX TO THIS ANNOUNCEMENT, AND THE INFORMATION CONTAINED HEREIN IS RESTRICTED AND IS NOT FOR RELEASE, PUBLICATION OR DISTRIBUTION, IN WHOLE OR IN PART, DIRECTLY OR INDIRECTLY, IN OR INTO THE UNITED STATES, AUSTRALIA, JAPAN, NEW ZEALAND, THE REPUBLIC OF SOUTH AFRICA OR ANY OTHER JURISDICTION IN WHICH SUCH RELEASE, PUBLICATION OR DISTRIBUTION WOULD BE UNLAWFUL.

THIS ANNOUNCEMENT, INCLUDING THE APPENDIX TO THIS ANNOUNCEMENT, IS FOR INFORMATION PURPOSES ONLY AND DOES NOT CONSTITUTE: (A) A PROSPECTUS OR OFFERING MEMORANDUM; (B) AN ADMISSION DOCUMENT PREPARED IN ACCORDANCE WITH THE AIM RULES; OR (C) AN OFFER FOR SALE OR SUBSCRIPTION OF ANY SECURITIES IN THE COMPANY. THIS ANNOUNCEMENT AND THE APPENDIX DOES NOT CONSTITUTE OR CONTAIN ANY INVITATION, SOLICITATION, RECOMMENDATION, OFFER OR ADVICE TO ANY PERSON TO SUBSCRIBE FOR, OTHERWISE ACQUIRE OR DISPOSE OF ANY SECURITIES OF Southern Energy Corp. IN ANY JURISDICTION IN WHICH ANY SUCH OFFER OR SOLICITATION WOULD BE UNLAWFUL.