This White Metal Resources profile is part of a paid investor education campaign.*

Diversification is one of the golden rules of investing, no matter which industry you are looking at and when it comes to the mining sector, project diversification is a powerful strategy to mitigate risk. Companies with a diverse portfolio of prospective projects have more protection against the inherent ups and downs of commodities cycles and more exposure to potential mineral discoveries.

Mining producers with sole investment in one market may be hit the hardest when demand or prices rapidly decline. However, finding companies with the expertise to diversify their project portfolio and target materials with robust markets is like striking gold. These companies have the potential to offer safety and provide stakeholders significant exploration success.

White Metal Resources (TSXV:WHM) is a Canadian mineral exploration company focused on precious and base metal projects in Ontario and Newfoundland in Canada, as well as in Namibia, Africa. White Metal’s well-seasoned management team and board of directors has the geological, technical, corporate governance and financial capabilities, along with numerous years of experience and achievements in the mining industry, to plan and execute various strategies to enhance value for its shareholders.

The company is currently operating three prospective projects in Ontario: 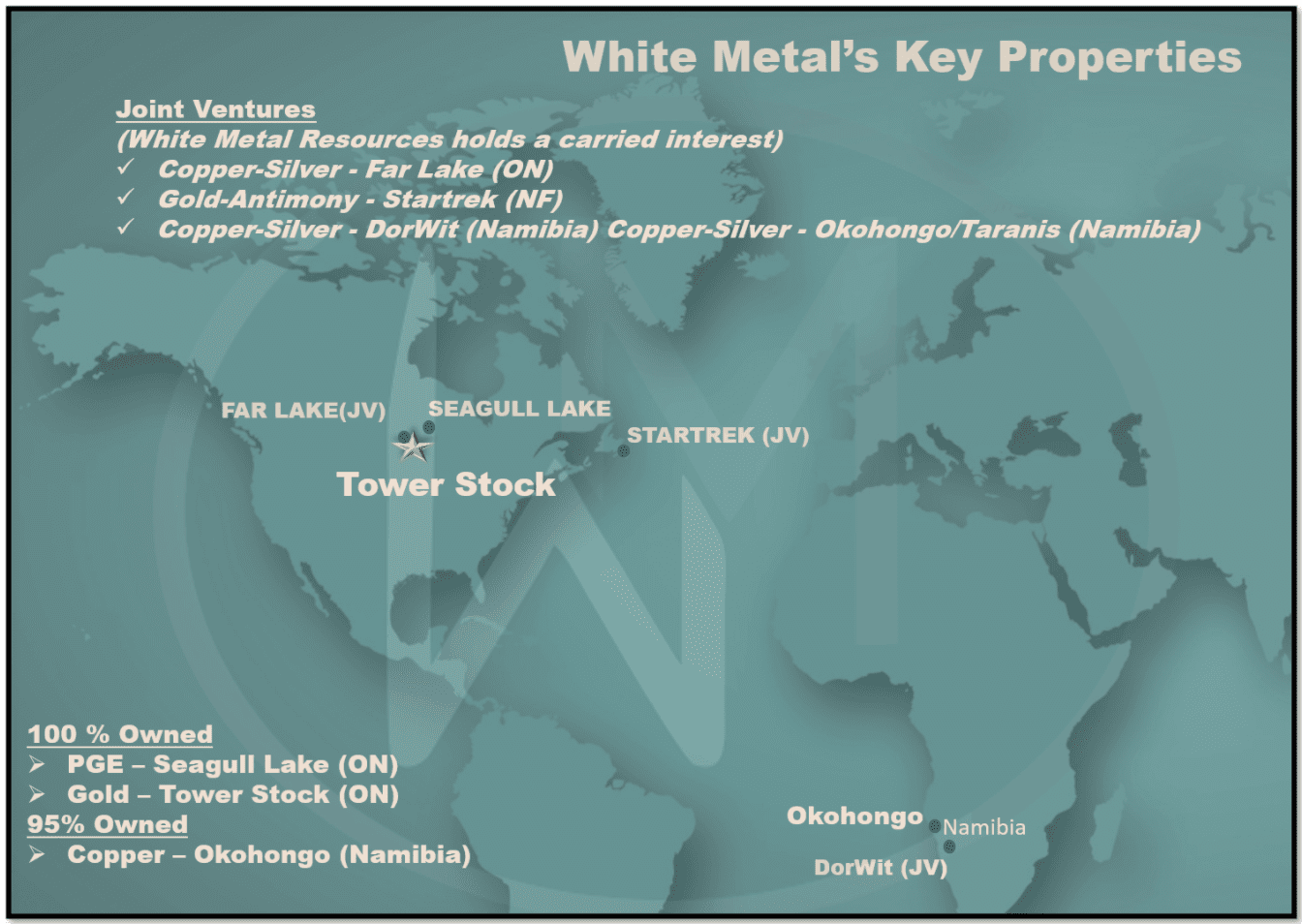 The Company is also currently operating three prospective projects which are in Newfoundland and Namibia Africa including:

The Tower Stock Gold Project in northwestern Ontario, is White Metal’s flagship project. The asset covers approximately 1,994 hectares and consists of single cell mining claims and boundary cell mining claims. Also included in this area are 188 hectares of patented mining claims. Strategically positioned about 40 kilometers northwest of the port city of Thunder Bay, Ontario, Tower Stock leverages a nearby highway, railway and hydro with exploration facilities located on the Property.

A recent visit to the Tower Stock Gold Project site

Past exploration campaigns have determined gold mineralization is hosted within Tower Stock’s volcanic and sedimentary rock units and within the associated Tower Mountain Intrusive Complex (“TMIC”). Historical drill core intercepts have outlined both high-grade and low-grade gold zones. With at least 2 km of potential strike between the U-V Zone gold deposit in the northwest and the last recorded exploration drilling (TM-07-58: 6.0 meters @ 5.42 g/t Au) to the southeast, the Company believes there is ample opportunity to build both high-grade and low-grade (bulk tonnage) gold resources through in-fill drilling and to expand current mineral resources through additional drilling. Given the Property’s extensive historical database and the plethora of gold mineralization known across the Property, White Metal believes they are on the doorstep of making significant discoveries. 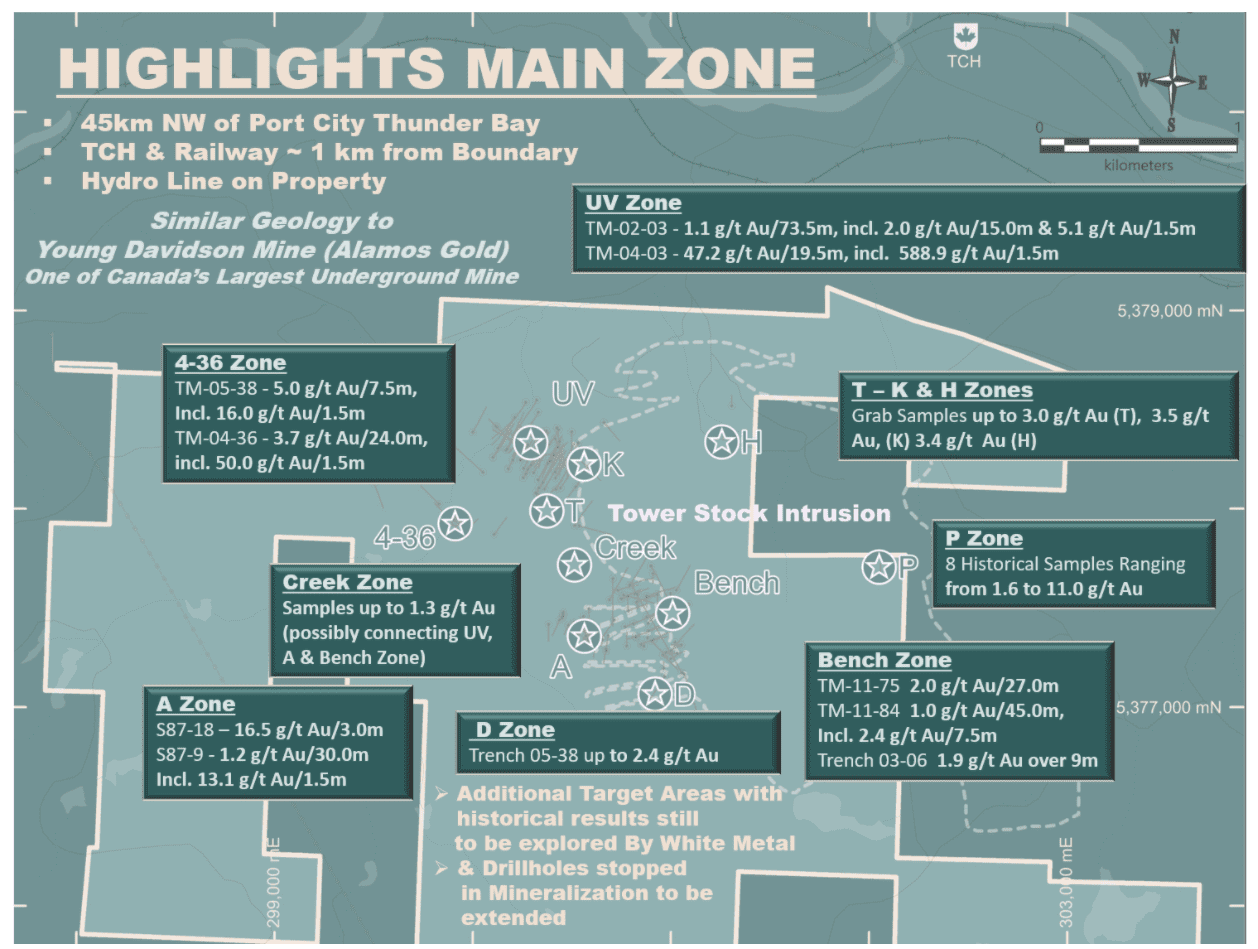 the main zones gold mineralization between the U-V Zone and Bench Zone.

The primary target in the Project area is the Seagull Lake Intrusion (“SLI”), described as a 10 km diameter, circular intrusive composed of ultramafic rocks with a high olivine content and derived from a deep mantle source. Layering and multiple phases of intrusion have been recognized, creating a favourable setting for Noril’sk Type sulphide accumulation. The SLI is located in the Nipigon Plate, which is interpreted to represent the failed third arm of a Proterozoic-aged, mid-continent rift system, the bulk of which lies beneath Lake Superior to the south.

This rifting event is interpreted to be associated with significant Cu-Ni-PGE mineralization such as:

Leveraging the current revitalization of gold exploration in Canada’s easternmost province of Newfoundland, the Company has entered a binding letter of intent to option up to a 70% interest in the Startrek Gold-Antimony Project.

The Property consists of 278 claim units over 7,371 hectares. It is located approximately 20 km east of Gander, Newfoundland, and New Found Gold Corp’s (TSXV:NFG) Queensway Property and the Keats Discovery Zone, which reported a diamond drill core intersection of 19.0 meters at 92.9 g/t Au starting at 96 meters. 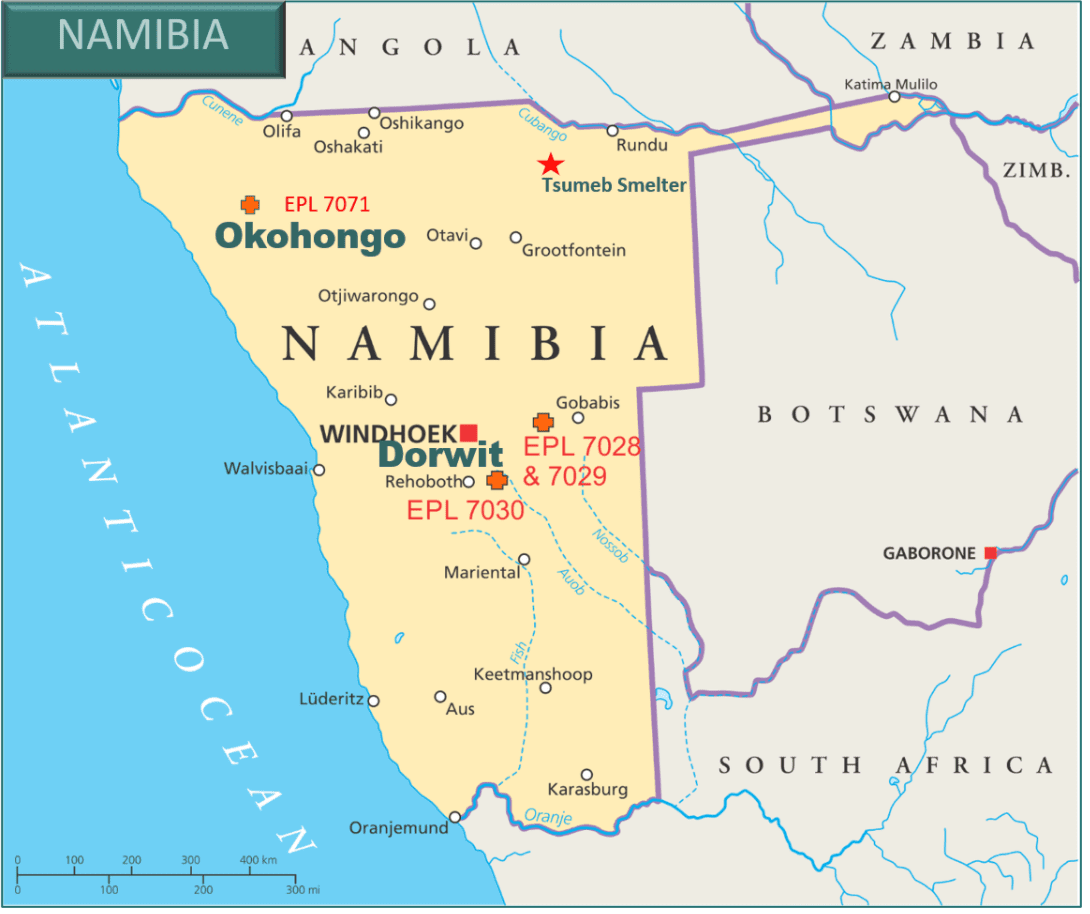 Mineral Resources are considered historical in nature, have not been independently verified by a QP and are non-compliant with NI 43-101.

The Okohongo/Taranis Copper-Silver Project, defined by licence EPL 7071, is located in the Central African Copperbelt and covers about 19,805 hectares, located in the northwestern region of Namibia. The licence contains the historical Okohongo Cu-Ag deposit which extends over 600 meters in strike length and is hosted by metasedimentary strata which is analogous to the stratiform sediment-hosted deposits found in the Central African Copperbelt of Zambia.

The company is currently completing an over 3,000 meters reverse circulation drilling program over the Okohongo copper-silver deposit in order to generate a new National Instrument 43-101 compliant Mineral Resource Estimate and Technical Report.

Michael Stares is a successful entrepreneur and has been involved in the mining exploration business for over 30 years. Stares is co-owner of Stares Contracting Corp., an exploration services company, which he has successfully managed for the past 15 years. In March of 2007, Stares, along with the rest of the Stares/Keats family, were the proud recipients of the Prospectors and Developers Association of Canada (PDAC), “Bill Dennis Prospector of the Year Award.”

He has served on the board of several junior mining companies and at present is a director of Metals Creek Resources Corp. and Benton Resources Inc. In 2009, he and his brother Stephen started Rare Earth Metals Inc., for which he served as president and CEO for three years. He is excited to share the knowledge he has gained over the past 30 years to advance White Metal Resources and contribute to its growth now and into the future.

Dr. Elliot Strashin graduated from the University of Toronto School of Medicine in 1980 after which he practiced in the community of Elliot Lake. It was during his tenure in Northern Ontario that he began prospecting and staking mineral claims. From 1996-2001 he served as a director of Maple Minerals Inc. In April of 1999 he joined the board of Canadian Golden Dragon Resources Ltd. as Secretary and became President and C.E.O. in January of 2000. He continued to serve as an officer of the corporation through its time as Trillium North Minerals Ltd., until June of 2014 when it became White Metal Resources Inc. Dr Strashin is also a member of the board for other public and private companies involved in various green technologies.

Jean-Pierre Colin DCS, LL.L, MBA, is a corporate strategy consultant to high-growth publicly listed mining companies. He has been an effective mining executive and securities industry professional. Over three decades, Colin’s investment banking background has extended to firms such as Richardson Greenshields, JP Colin Securities, Deacon Capital, Octagon Capital and Desjardins Securities, where he provided corporate financing and mergers and acquisitions services to hundreds of prosperous mining issuers. Colin co-founded and managed the highly successful NIM group of mining funds in the 1980s and the Caratax mining funds of the 1990s, collectively working a portfolio of over C$750,000,000 of flow-through shares and invested in over 200 junior mining companies in Canada.

Colin is also a director of dynaCERT Inc. and Sego Resources Inc., and he has formerly served as director of Premier Gold Mines, Wolfden Resources, Virginia Gold and Pelangio Mines. He was the initiator and a founding shareholder of Detour Gold, one of Eastern Canada’s most extensive gold mining operations.

Dr. Scott Jobin-Bevans has +30 years in the mineral exploration business, including fieldwork, management and administrative duties, research, report writing, presentations, and project finance. Dr. Jobin-Bevans has nearly 20 years of direct experience with public and private companies as an officer, director and technical advisor, and has taken several private companies public. He is a registered geoscientist with the Association of Professional Geoscientists of Ontario (APGO), an adjunct professor in the Department of Geology, Lakehead University and a certified Project Management Professional (PMP). He also has a wide range of exploration experience in most commodities, including magmatic sulfides and PGE mineralization, gold, silver, copper (porphyry) and base metals (VMS). Dr. Jobin-Bevans has an extensive industry and government network and served as president and a director of the Prospectors and Developers Association of Canada (PDAC).

Nikolaos S. Tsimidis. Nick is an entrepreneur and a specialist in real estate investments’ financial aspects. He graduated with a Bachelor of Commerce from the University of Toronto in 1987. Upon graduation, he spent six years at KPMG in the audit department, providing services to various clients. In September 1993, Nick left KPMG to set up his chartered accounting firm, focusing on tax and financial planning. Nick is the CFO and the Principal Broker for Union Capital Management Inc. The CFO of Haven Property Development Inc. Nick is also the CFO and a director of Metals Creek Resources Corp. and Bold Stroke Ventures.

The information contained here is for information purposes only and is not to be construed as an offer or solicitation for the sale or purchase of securities. Readers should conduct their own research for all information publicly available concerning the company. Prior to making any investment decision, it is recommended that readers consult directly with White Metal Resources and seek advice from a qualified investment advisor.