This Vanstar Mining Resources profile is part of a paid investor education campaign.*

Quebec is one of the world’s most prolific mining jurisdictions. World-class mining districts like Abitibi-Témiscamingue, Chibougamau and Grand-Nord in the Canadian province host some of the most prominent players in the gold, copper, nickel and zinc mining spaces. To date, Quebec has 25 producing mines.

The province of Quebec is politically stable, provides government support for mining and exploration and is one the most prolific producers of gold in the world after the Witwatersrand in South Africa. 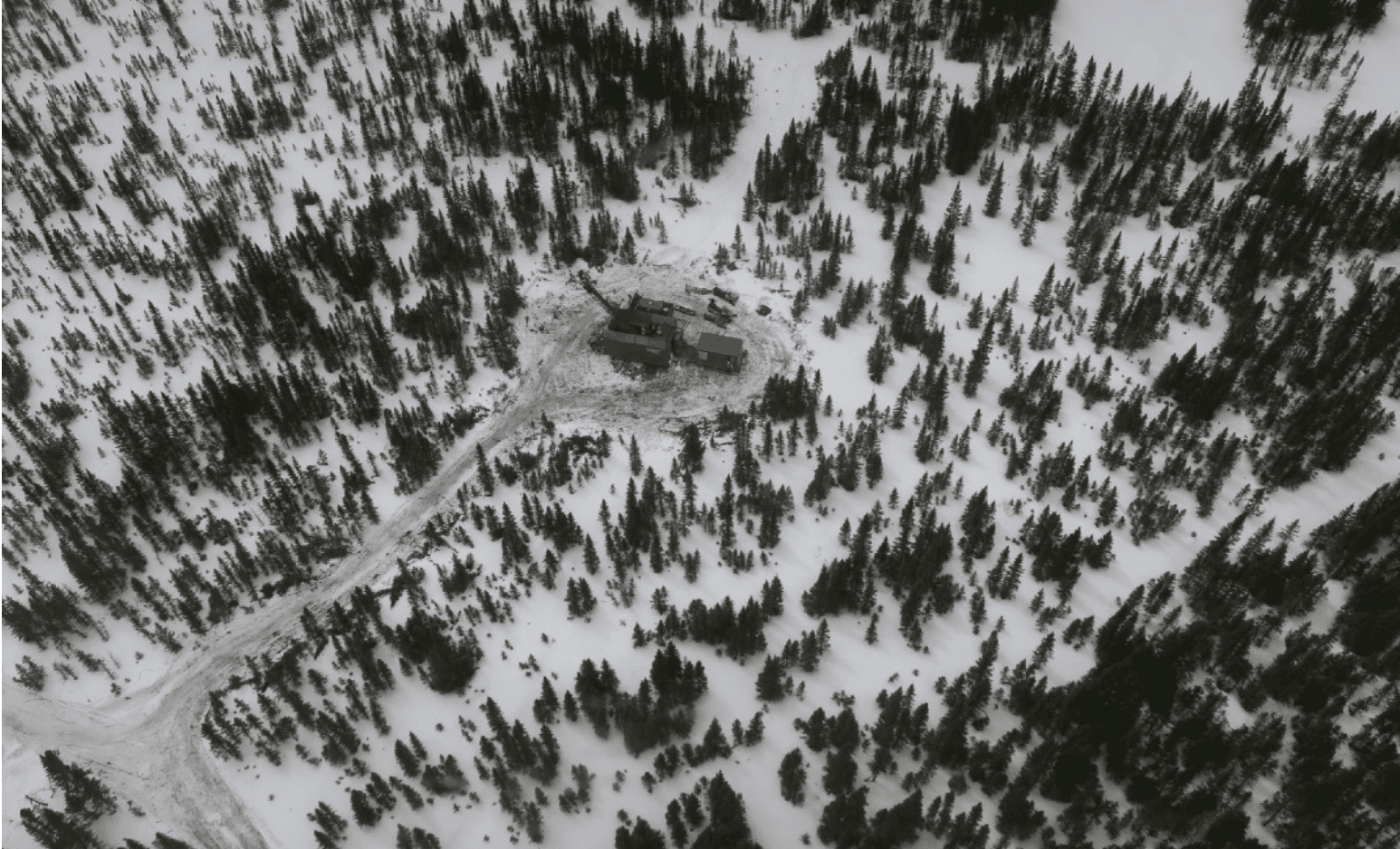 Vanstar Mining Resources’ stable of gold projects offer investors exposure to different stages of development. Its flagship Nelligan project is a largely de-risked asset and one of Quebec’s largest gold projects containing approximately 3.2 million ounces of gold. The project is located near excellent infrastructure and, through a joint venture with Vanstar, is operated by one of Canada’s premiere gold producers, IAMGOLD Corp.

The Nelligan project is being developed with IAMGOLD Corp. (TSX:IMG, NYSE:IAG) which currently owns 75 percent with Vanstar retaining 25 percent ownership. IAMGOLD has the option to increase its ownership to 80 percent by completing a feasibility study, which would allow Vanstar Mining Resources to retain a 20 percent undivided non-contributory carried interest until production, as well as a one percent NSR on the eight original claims on the property. The project has inferred resources of 3.2m oz @1.02 g/t Au and is located in the NE of the Abitibi region. Vanstar’s agreement with IAMGOLD is somewhat unique, as it ensures that Vanstar will participate in a production scenario without the burden of raising capital to fund development. This is a key differentiator and distinguishes this partnership from typical joint ventures.

In addition to the Nelligan Project, Vanstar owns 100 percent of the Felix project, the Amanda project, the Frida and the Eva projects. All have had geophysical groundwork, and/or drilling programs and have significant exploration potential. 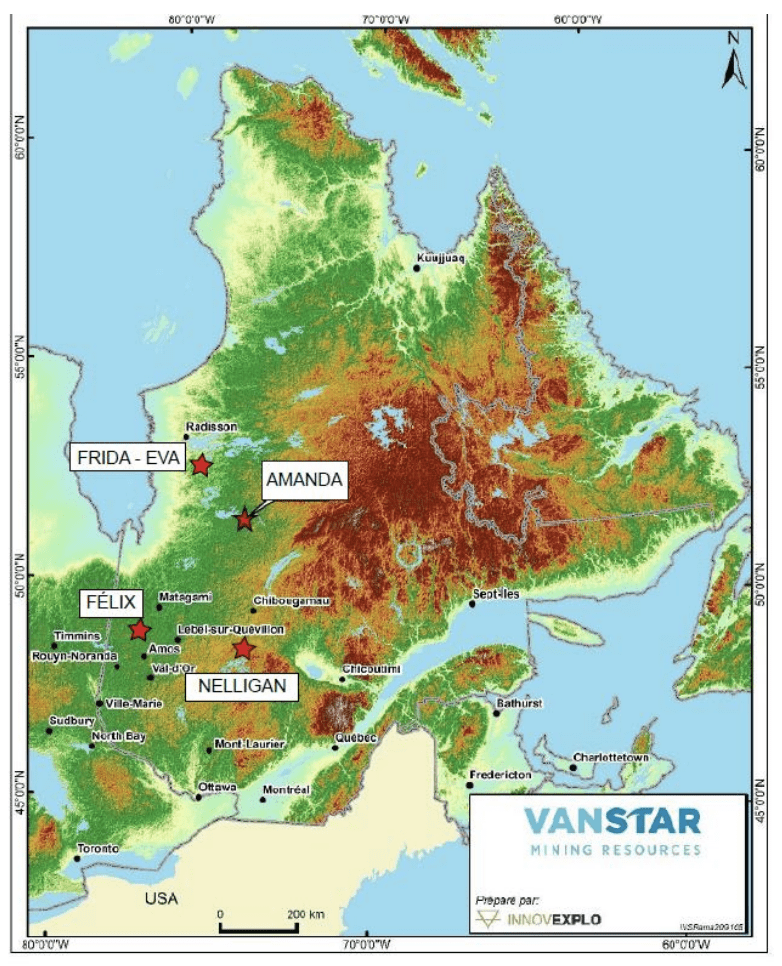 Vanstar Mining Resources currently has CAD$5.8 million in total cash which advantageously presents it with the ability to advance its exploration assets without the need to access the capital markets at inopportune times. 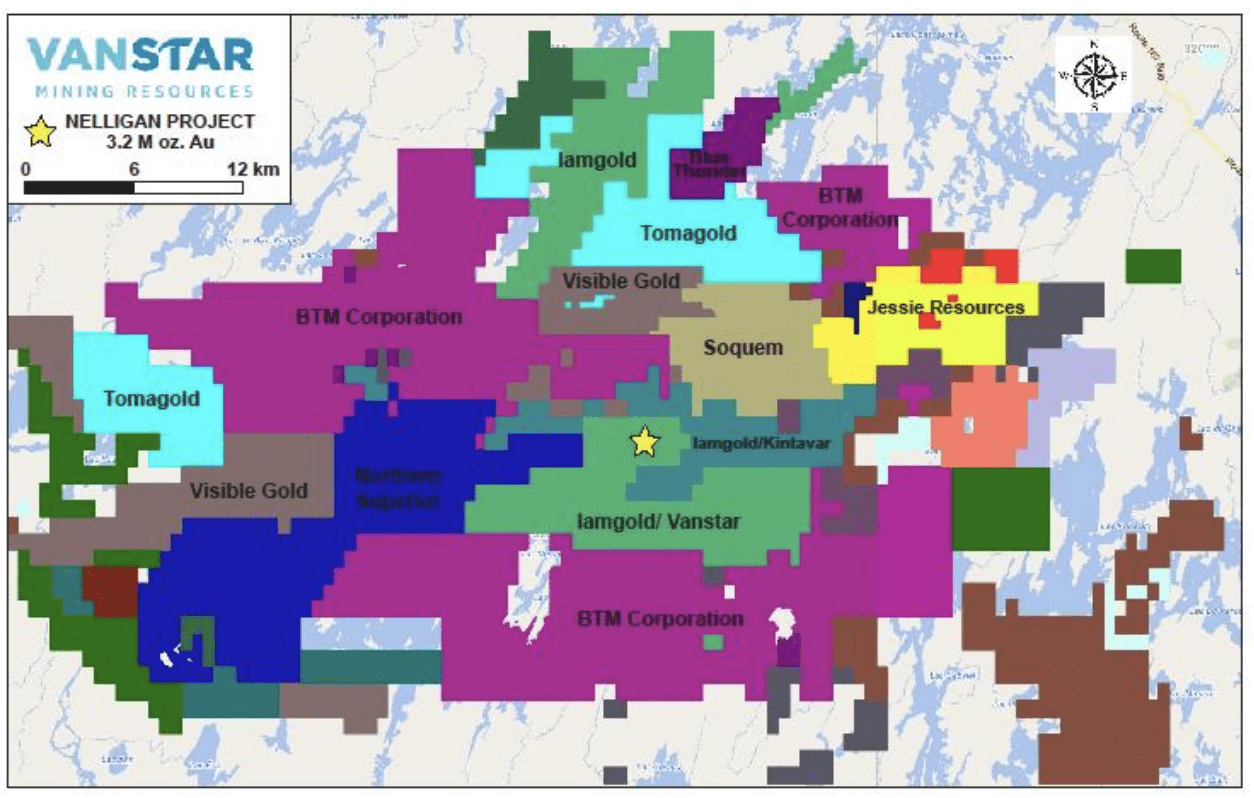 The property is located in proximity to extensive infrastructure and resources such as electricity, railroads, airport and year-round road access.

The project hosts a recognized world-class discovery with initial inferred resources of 3.2 million ounces Au, with highlighted mineralization reaching 96.9 million tonnes at 1.02 g/t Au. The resource has considerable potential for growth with the mineralized area having recently been extended along strike by at least 700m. Nelligan’s four major gold zones, Renard, Liam, Dan and 36 zones, have transformed the asset from a grassroots discovery into a sizable resource in only three years of exploration.

Additionally, IAMGOLD intends on conducting IP geophysical surveying, mapping, sampling, and metallurgical testing over the summer as well as an updated resource calculation later this year.

Felix has been historically explored for iron and gold in the mid to late 1900s. Assays from all nine 1.5 meters samples from historical drill hole 728-06-01 returned gold grades ranging from 0.9 g/t Au to upwards of 1.5 g/t Au over a 70-meter interval. Other groundwork on the property includes geophysical and high-resolution magnetic surveying and banded iron formation identification.

Plans for a 2021 exploration program include a 3,000-meter diamond drill program to confirm historical results, as well as to test MEGATEM conductors, in highly prospective iron formations.

Future plans for the project include high-resolution airborne magnetic surveying, mapping, stripping, and a drill campaign.

These highly prospective 100 percent owned projects consist of 107 claims with a total surface area 5,517 hectares in the James Bay area. The projects are adjacent to Quebec Precious Metals’ Sakami project and on-trend between Genius Metal’s gold discovery and QPM’s JR zone. A recent high resolution magnetic survey highlights a prominent folded iron formation on Eva, as well as a number of magnetic anomalies on Frida.

2021 exploration plans will follow up on the magnetic survey, with field prospecting, and sampling.

JC St-Amour has over 20 years of mining industry experience in executive leadership roles, corporate finance, and mergers & acquisitions. He has a master’s degree in geology and is a Chartered Financial Analyst with expertise in capital markets, financial and investment analysis, asset valuation, capital raising, and M&A transactions in the natural resource sector. During his career, St-Amour has held various executive leadership roles at the management and Board of Directors level in junior mining and investment banking firms.

Martin Nicoletti is a chartered professional accountant with more than 31 years of experience. He holds a bachelor’s degree in business administration, accounting specialization. Nicoletti is also president of Corporation Financière SKTM Ltée and chief financial officer of several other mining companies.

Gilles Laverdière holds a B.Sc in geology from Université de Montréal and a certificate in Environment from Université du Québec in Abitibi-Témiscamingue. He worked for various mining exploration companies, including Aur Resources inc., until 1984 when he founded his geological consulting business. He then managed numerous exploration and development projects in Abitibi and raised funds for mining companies. From 1991 to 1997, Laverdière was part of exploration projects in the Philippines, Nevada (USA), and Brazil. From 1997 to 2006, he worked in China, where he started HMZ Metals, a polymetallic producer operating a copper smelter with revenues exceeding CAD$15 million per year. Since 2006, Laverdière has been a consulting geologist working on projects in Abitibi, Central America and Africa.

The information contained here is for information purposes only and is not to be construed as an offer or solicitation for the sale or purchase of securities. Readers should conduct their own research for all information publicly available concerning the company. Prior to making any investment decision, it is recommended that readers consult directly with Vanstar Mining Resources and seek advice from a qualified investment advisor.