This TomaGold profile is part of a paid investor education campaign.*

Quebec and Ontario are more than Canada’s most populous provinces. These provinces are also hosts to some of the country’s most prolific mining jurisdictions, combining the perfect storm of stability, government support in mining and high-grade mineralization discovery potential. Jumping onto investment opportunities in these provinces can present investors with a head start on the next new commodity cycle. With a forecasted call for a 30 percent return increase on commodities like copper and gold in 2021, investment interest in Canada’s biggest provinces is very much warranted.

Commencing drill campaigns for this property could present similar copper-gold mining success as seen in the project’s past-producing history and neighboring development projects. The Obalski is strategically positioned near the highly prospective Philibert deposit and the Nelligan gold project currently operated by IAMGOLD (TSX:IMG) and Vanstar Mining Resources (TSXV:VSR).

TomaGold has a joint venture with Evolution Mining (ASX:EVN) and New Gold (TSX:NGD) that gives the company 24.5 percent interest in the resource-rich Baird property near the Red Lake mining camp in Ontario. Exploration work on the property from the 1980s returned assay values of 172 g/t gold over 1.2 meters and 19 g/t gold over 1.8 meters. TomaGold believes that additional high-grade gold discoveries merit further drilling campaigns set for early February 2021.

TomaGold is very well positioned for growth and project advancement as a junior mining company. It currently has over C$8 million in liquidity and cash for intended project funding and operates with a tight and deeply connected shareholder structure. Major shareholders include IAMGOLD, closely tied family offices, family members and management. 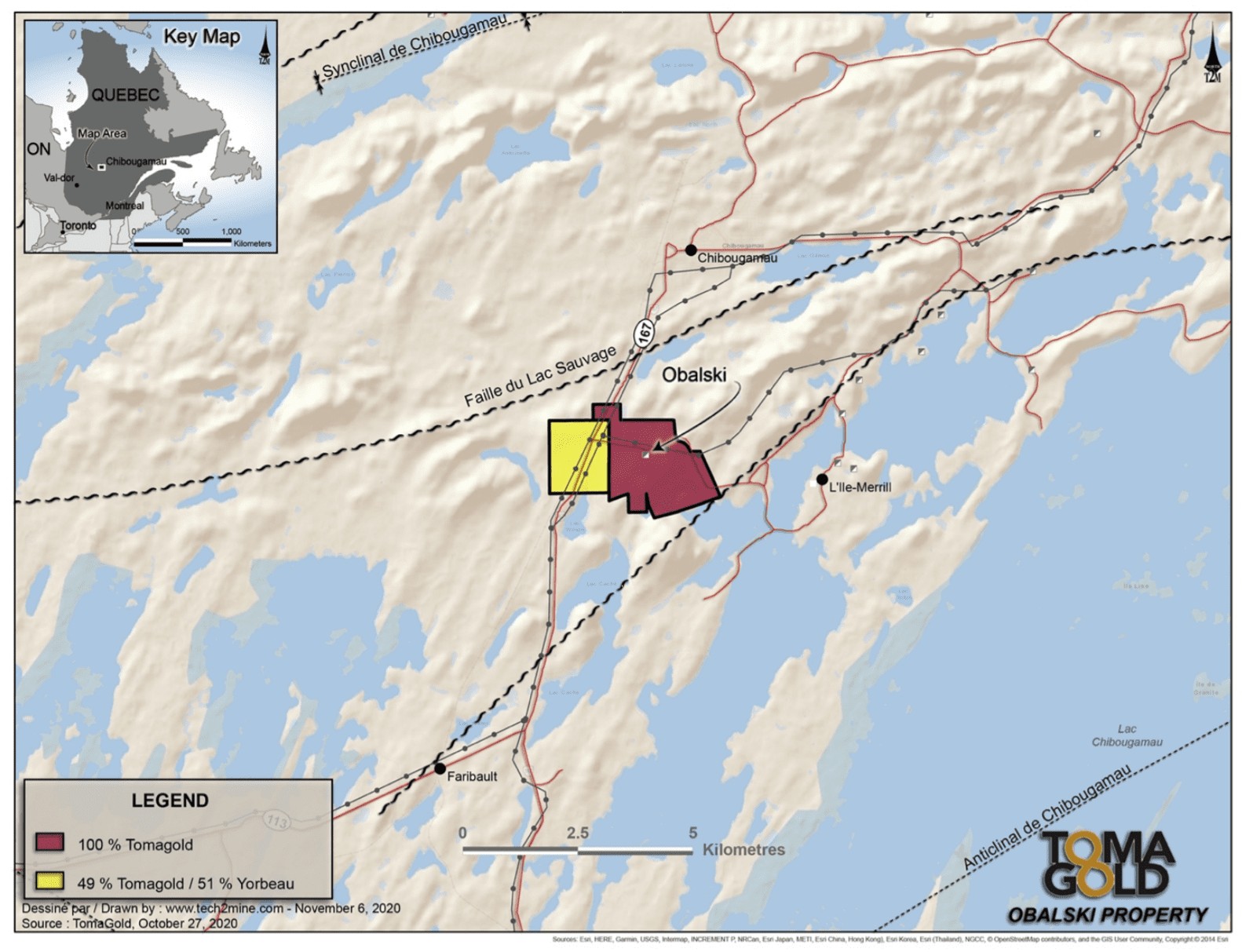 The highly prospective Lac Doda project operates in the resource-rich Chibougamau mining camp in Northern Quebec. The property consists of eight mineral claims over an area of 4,478 hectares. Located approximately 20 kilometers southwest of the Monster Lake property, the Lac Doda property leverages many of the same existing infrastructure and geographical advantages.

Future plans include detailed airborne and ground geophysical surveying data compilation. TomaGold intends on using this analysis for drill recommendations and target generation for both properties. 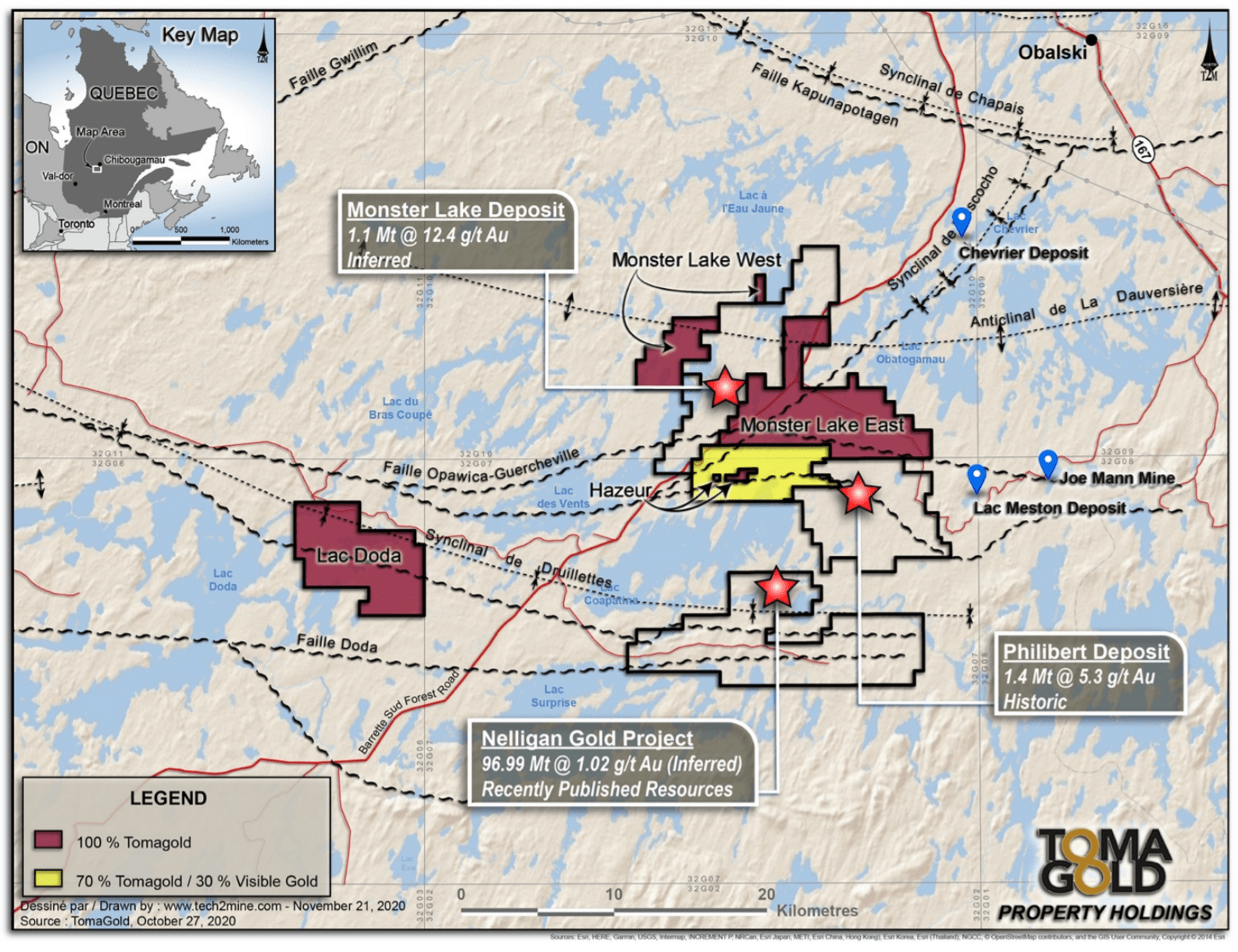 The Hazeur project consists of 61 mineral claims and covers 2,863 hectares along the southern border of the Monster Lake property. TomaGold currently has 70 percent interest in the property and is strategically positioned as the project operator. The project covers the Joe Mann-Guercheville corridor with numerous gold occurrences along the property’s deformation zone.

Since 2015, Hazeur has seen successful high-definition magnetic VTEM-type airborne surveying over the property and advanced drilling. This exploration reported significant gold intersections across seven drill holes. TomaGold intends to continue exciting exploration and property assessment of this valuable project into 2021.

TomaGold is currently in a joint venture with Evolution Mining and New Gold for the Baird property. The company holds a 24.5 percent interest in Baird, with Evolution owning a majority 51 percent as the project operator.

The Baird property lies in the prolific Red Lake gold belt 6 kilometers north of the Madsen Mine and 14 kilometers southwest of the Red Lake mine. The asset’s geological profile includes volcanic rock coverage and the famous structural and alteration system characteristics of Red Lake and Campbell mines. This profile could explain the impressive assay values of 172 g/t gold over 1.2 meters and 19 g/t gold over 1.8 meters reported from early drilling programs.

David Grondin has worked in the financial and mining sectors for over 20 years. He has been the president and CEO of TomaGold since December 2011 and is a director of AM Resources. He was also president and CEO of NQ Exploration Inc. and has acted as a financial analyst for CTI Capital Inc. Grondin has a bachelor degree in business administration (finance) from HEC Montréal and experience in initial public offerings, mergers and acquisitions and reverse takeovers.

Martin Nicoletti is a certified general accountant with more than 22 years of experience. He has been involved in global exploration activities with public junior mining companies since 2004. His duties include financial controls and financial reporting. He presently acts as CFO for several public companies.

André Jean was the chief engineer geologist for the Monster Lake project from its commencement until his departure in 2018. He has over 35 years of geology experience, having worked for multiple mining companies located in Quebec, Central and South America and Africa, including Les Mines Seleine, Louvem, Lac Minerals and Osisko. Jean graduated from Université du Québec à Chicoutimi in 1979 with a degree in geological engineering.

Caitlin Jeffs received her Honors B.Sc. in Geology from the University of British Columbia in 2002. Caitlin has worked for several junior and major companies since 2002 in both gold and base metal exploration. Most of her experience has been with Placer Dome CLA Inc. and Goldcorp Inc. managing all aspects of in-depth exploration projects and specializing in GIS technology and 3D modeling of ore bodies. She is a founding partner and 33 percent owner of Fladgate Exploration Consulting Corporation of Thunder Bay, ON, a full-service mineral exploration consulting firm.

*Disclaimer: This profile is sponsored by TomaGold (TSXV:LOT). This profile provides information which was sourced by the Investing News Network (INN) and approved by TomaGold in order to help investors learn more about the company. TomaGold is a client of INN. The company’s campaign fees pay for INN to create and update this profile.

The information contained here is for information purposes only and is not to be construed as an offer or solicitation for the sale or purchase of securities. Readers should conduct their own research for all information publicly available concerning the company. Prior to making any investment decision, it is recommended that readers consult directly with TomaGold and seek advice from a qualified investment advisor.