Growing a Portfolio of Silver Assets in Idaho, Nevada and British Columbia

This Silver Hammer Mining profile is part of a paid investor education campaign.*

Silver demand comes from a variety of different markets. Aside from jewelry, the precious metal leverages exposure in electrical, thermal,  and many industrial spaces. With such usage versatility, especially in a growing electrified world, investors can expect silver demand to only grow.

A hotspot for silver mining on many radars is Coeur d’Alene Mining District in Idaho, USA. This region stands as one of the most productive mining districts in Idaho for silver and lead ore production. With over 1.2 billion ounces of silver production under its belt and more to be discovered, mining in this prolific region could mean exceptional economic upside for many competing silver players.

Silver Hammer Mining (CSE:HAMR, OTC:HAMRF) is a company focused on adding value for shareholders by growing a portfolio of silver assets located in some of the most prolific silver districts in North America that have significant discovery, scale and near term production potential.

The flagship Silver Strand project comprises 70 claims over a 5.5 kilometers strike length atop a silver belt in the Coeur d’Alene mining district in Idaho. The district has produced over 1.2 billion ounces of silver and hosts some of the world’s largest silver mines. Silver Strand remains relatively underexplored and presents Silver Hammer Mining a tremendous opportunity for silver discovery at depth and laterally along strike.

In August 2021, the company reported high-grade surface samples including 11.79g/t gold and 255g/t silver to further extend the mineralized trend at Silver Strand. “We are very excited with these results which confirm widespread alteration and gold-silver mineralization throughout the property and along the 5.5 km strike,” commented Silver Hammer Mining Resources president Morgan Lekstrom.

Silver Hammer Mining’s Eliza Silver project, located within one of the world’s most productive silver districts, could be the missing half of the Hamilton deposit. The Silver Hammer Mining team plans to deploy a new geologic model, which will explore the down-thrown side of the Eberhardt Fault, which separates the Hamilton District from the Eliza Property.

The Silverton Silver Mine is located in East Nevada’s “Silver Alley”,  a jurisdiction containing numerous large deposits including the 174 Moz Tonopah silver project and the Tybo project, which produced 100 Moz AgEq. The Silverton Silver mine is a proven producer of reported grades in the 1930s ranged up to 30 oz/t (933 g/t) Ag. Silverton has untapped exploration potential with a sizeable, untested extent of mineralization around the mine reported in the 1980s.

The Lacy gold-silver project consists of three non-surveyed contiguous mineral claims totalling 590.08 hectares located within the Nanaimo and Alberni mining divisions of British Columbia. Acquired in 2017, the property is subject’s Silver Hammer Mining to a payment agreement of two percent net smelter royalty to Barrie Field-Dyte. The company has been quick to begin exploring this highly prospective asset since its acquisition. 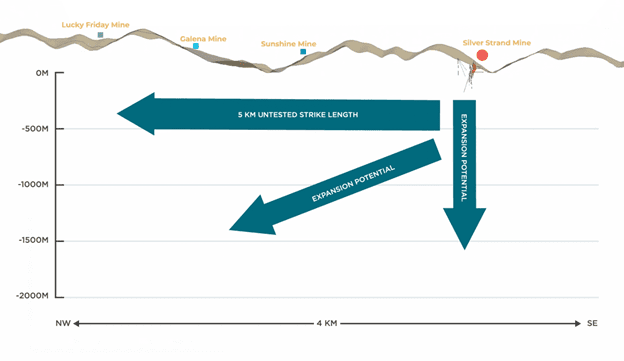 Silver Hammer Mining has a world-class management team with collective decades of experience in exploration, mine development and capital markets. Its exploration is headed by Lawrence Roulston, an expert in mining, resource opportunities and business advisory. Together, this results-driven leadership primes the company for exceptional silver and precious metal discovery and economic success across its robust portfolio of assets. 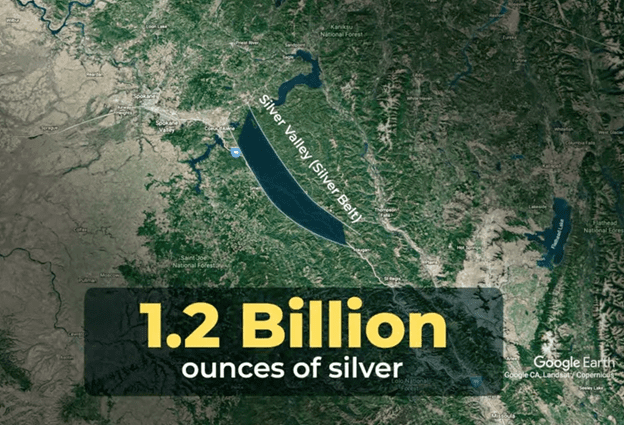 The Silver Strand mine comprises 70 claims over a 5.5 kilometers strike length along the Revett formation, a silver belt within the renowned Coeur d’Alene mining district in Idaho. The Silver Valley leverages a rich century-long history of successful silver mining and past-producing mines that have been underexplored.

Silver Hammer Mining has an aggressive exploration program underway, which includes surveying, sampling and 3D modelling. In 2021, the company plans to commence a 14 hole, 2,700-meter drill program and ground geophysics campaign along strike between the Silver Strand and Burnt Cabin mine sites.

The Eliza Silver Project is located along strike of the Hamilton Mining District, Nevada’s highest-grade silver district, which produced 40 million (M) ounces (oz) silver with grades up to 25,000 grams per tonne (g/t) between 1876-1890.

Surface samples collected at the nearby California Mine grading 24,956 g/t silver (Ag)* and information gained from a detailed geologic map, indicate that Eliza and the Hamilton District contain high-grade Ag mineralization hosted by the same formation; however, no significant work or drilling has been done on the project in over half a century.

The Silver Hammer Mining team plans to deploy a new geologic model, which will explore the down-thrown side of the Eberhardt Fault, which separates the Hamilton District from the Eliza Property.  The California Mine, which mined ore grading between 5,621 to 18,737 g/t silver equivalent (AgEq)* in the 1870s is also located south of the Eberhardt Fault, indicating that very high-grade mineralization can be found within the Eliza fault block.

The Silverton Silver Mine

The past-producing Silverton Silver Mine is located in East Nevada’s “Silver Alley” with high-grade historic production of up to 933 g/t silver.  Despite significant surface exposures and grab samples grading up to 499 g/t Ag and 1.99 g/t Au, no modern-day drilling or subsurface exploration techniques have been conducted on the project since the 1920s.  The first modern work is currently underway, including satellite imaging which has shown similar colour anomalies to Kinross’ 15M oz Au Round Mountain mine (see Figure 1).

Numerous large deposits are located in the “Silver Alley,” including the 174 Moz Tonopah silver project and the Tybo project, which produced 100 Moz AgEq (see Figure 2). 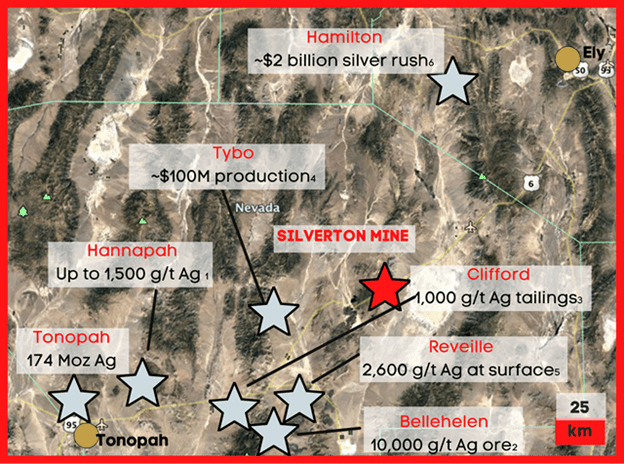 Figure 2: Silverton area map including other mines in the area

“The geology of the Eliza project suggests that it could be a down-dropped extension of the 40 Moz Hamilton Silver project,” stated President, Morgan Lekstrom. “The addition of Eliza and Silverton, two highly prospective silver projects in two of the most prolific silver districts in the USA, complement our growing portfolio of western US focused silver assets, which includes the past producing Silver Strand mine in Idaho. The acquisition of these projects reaffirms our strategy of adding shareholder value by acquiring silver assets that have both large exploration upside and near-term production potential.” 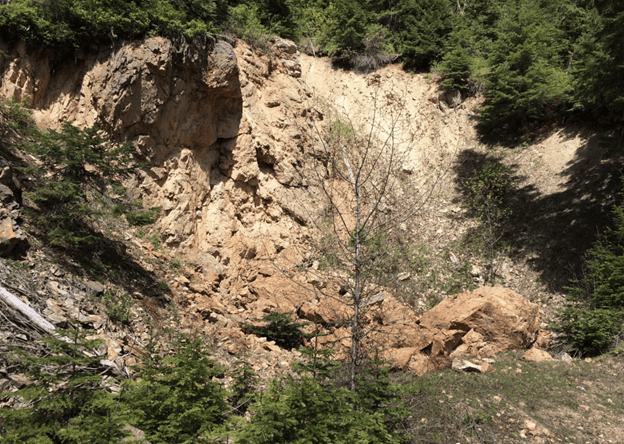 Historic sampling by Lode Resource Corp in 1987 revealed  14.9 g/t gold from rock samples of massive and semi-massive pyrite from the main showing located in the southwest portion of the property. Other historic sample highlights include values of 64ppm copper, 6ppm lead, 32ppm zinc and 0.9g/t silver.

The most prominent gold and silver occurrences at Lacy are exposed along the abandoned CPR railway track where elevated gold and silver values are associated with pyrite and trace chalcopyrite, malachite mineralization. Silver Hammer Mining remains excited to continue exploring this prospective property.

Morgan Lekstrom has 14 years of mining experience in progressively senior roles in project operations and engineering management and has a strong leadership background with experience overseeing over 100 person teams onsite. In a recent role, Lekstrom served as engineering manager responsible for the budgeting, scheduling and the first phases of execution at Sabina Gold and Silver’s Back River Marine Laydown project. Prior, he spent two years in Ghana, West Africa where he played an integral role in the development and revival of Golden Star Resources’ Prestea underground mine. He led project, engineering and maintenance teams and worked with members of the executive team on the implementation of various strategic initiatives.

Alnesh Mohan is a finance executive with over 20 years of experience providing advisory services to a wide array of clients. He has been a partner at Quantum Advisory Partners LLP, a professional services firm focused on providing CFO and full-cycle accounting services to private and public companies since 2005. Acting on behalf of several public companies, Mohan has acquired considerable experience in financial reporting, corporate governance and regulatory compliance.

Mohan holds a Bachelor of Business Administration from Simon Fraser University, a Master’s of Science in Taxation from Golden Gate University and is a Chartered Professional Accountant (CPA, CA).

Phil Mulholland brings over 35 years of geological experience from mining projects in the western United States, Canada, Argentina, Chile, Guyana and Tanzania. He has worked extensively in Montana and Idaho working on a range of precious metals projects. His diverse background includes exploration, development and production, including both underground and open-pit projects, with an array of minerals and mines.

Mulholland has held senior-level positions in the region, including principal mine geologist or chief geologist, at Kinross’ Kettle River Buckhorn gold project, the Butte Highlands joint venture and Barrick’s Golden Sunlight mine. Since 2003, his primary focus has been transitioning late-stage exploration projects through development and into production.

Lawrence Roulston is a mining professional with over 35 years of diverse hands-on experience. He recently founded WestBay Capital Advisors, providing business advisory and capital markets expertise to the junior and mid-tier sectors of the mining industry. From 2014 to 2016, he was president of Quintana Resources Capital, which provided resource advisory services for US private investors, focused primarily on streaming transactions. Before Quintana, he was a mining analyst and consultant and the editor of “Resource Opportunities”, an independent investment publication focused on the mining industry. Prior, Roulston was an analyst or executive with various companies in the resources industry, both majors and juniors.

Mr. Roulston has nearly 40 years of diverse hands-on experience in the mining industry and currently serves as a director of several other companies listed on the TSX Venture Exchange and the New York Stock Exchange.

The information contained here is for information purposes only and is not to be construed as an offer or solicitation for the sale or purchase of securities. Readers should conduct their own research for all information publicly available concerning the company. Prior to making any investment decision, it is recommended that readers consult directly with Silver Hammer Mining and seek advice from a qualified investment advisor.