This Seahawk Ventures Inc. profile is part of a paid investor education campaign.*

Seahawk Ventures Inc. (CSE:SHV,OTC:SEHKF,FWB:7SR) is a gold exploration company and the second-largest landholder in the Abitibi greenstone belt’s Urban-Barry gold camp in Quebec, Canada. The company’s focus is on exploring its five gold properties: Touchdown, Mystery, Xtra Point, Skyfall and Blitz. Each property is contiguous or surrounded by Osisko Mining Corporation’s (TSX:OSK) properties, road-accessible and wholly-owned by Seahawk Ventures, a rarity as exploration partnerships are the norm for the region.

Seahawk Ventures’ management team has a track record of success in taking companies public. Collectively, the team has made 20 companies public, five of which have been bought out by major companies. Additionally, insiders are notably invested in the company and hold approximately 49 percent of the shares.

Located in the Abitibi Gold Belt 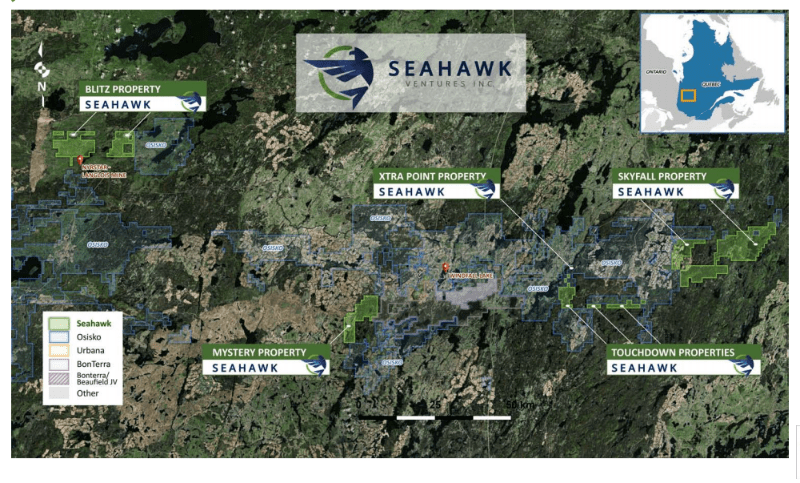 Seahawk Ventures wholly-owns the 2,700-hectare Touchdown property, which neighbors Osisko’s Windfall Lake project, where the mining major recently launched an exploration program. The Touchdown project is accessible by a network of forest access roads that connect with secondary highways to Chapais, Lebel-Sur-Quevillon and Senneterre, Quebec.

Since acquiring the property in 2017, Seahawk Ventures has completed an exploration program that consists of prospecting, stripping, channel sampling and a high-resolution drone magnetic survey. The magnetic survey defined numerous structures associated with gold occurrences in the area and grab samples from an outcrop assayed 11 g/t gold and 27 g/t gold.

Seahawk Ventures intends to complete approximately $750,000 in exploration on the property. The exploration program is expected to include drilling, stripping, sampling, an induced polarized survey and line cutting. To date, the company has extended the Road showing by 60 meters and a grab sample from the area returned 5.42 g/t gold. 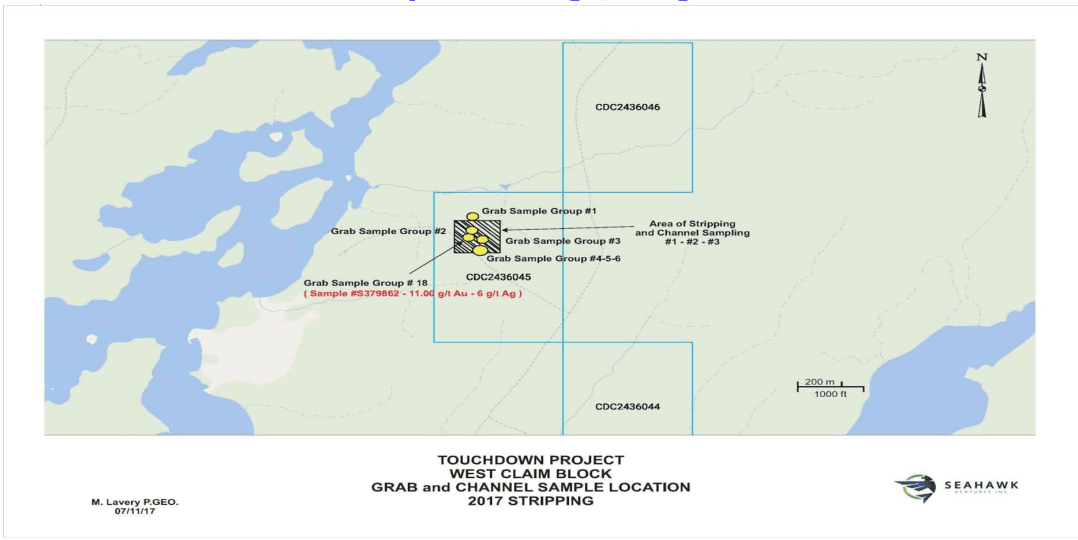 The wholly-owned, 3,730-hectare Mystery project is adjacent to the Windfall Lake property. The property is accessible by a network of forest access roads that connect with secondary highways to nearby cities.

Since acquiring the property in 2017, Seahawk Ventures has completed a NI 43-101 technical report and an exploration program that consisted of prospecting, grab sampling and a high-resolution drone magnetic survey. The magnetic survey defined two strong magnetic structures striking northeast to southeast and east to west.

The Xtra Point project has seen limited exploration to date. Before 2017, the Quebec government completed an airborne geophysical survey on the property. In its 2019 exploration program, Seahawk Ventures evaluated the property, but did not find any outcrop. However, a near-source angular frost heaved boulder was located containing massive to semi-massive pyrite and pyrrhotite.

Seahawk Ventures wholly owns the 12,116-hectare Skyfall project, which covers the eastern extremity of the Urban-Barry Greenstone belt. The geology at Skyfall is similar to the geology found at Osisko’s Windfall deposit, which is 40 kilometers to the west of the property. The property is approximately 150 kilometers east of Lebel-Sur-Quevillon and 75 kilometers south of Chapais and is accessible by logging trails.

The property has seen limited exploration and only one hole has been drilled. Prospecting on the Skyfall project in 2019 yielded one grab sample that assayed 0.22 g/t gold. Seahawk Ventures intends to complete an initial diamond drill program on the property to evaluate targets identified in the prospecting and airborne survey programs.

The wholly-owned 6,624.67-hectare Blitz property contains 118 claims in two claim blocks in the Urban-Barry gold camp. The property is adjacent to Osisko to the east, Nyrstar Canada (Holdings) Ltd. to the south, Golden Valley Mines Ltd. (TSXV:GZZ) to the southwest and various prospectors and junior exploration companies to the west and north. The property is accessible by road and located approximately 30 kilometers north of Lebel-Sur-Quevillon and 150 kilometers northeast of Val-d’Or, Quebec.

Nyrstar operates the Langlois zinc–copper–silver mine, which is located 0.8 kilometers south of the property. In addition to the operating mines in the area, there are several important deposits nearby, including the Cameron Lake South, Cartwright, Flordin, Discovery and Gander deposits.

Prospecting on the Blitz project in 2019 led to a discovery at the Bella showing. The showing returned a grab sample that assayed up to 2.4 g/t gold. Seahawk Ventures identified two other shear zones that displayed moderate carbonate alteration with minor pyrite, pyrrhotite and chalcopyrite with associated EM and magnetic anomalies.

Mitchell Lavery is a mining exploration professional with over 42 years of experience in all aspects of mineral exploration, from grassroots to ore deposit delineation to developing and managing a mine, around the world. He has been involved in the discovery of and development of several mineral deposits in Canada. His experience covers gold, silver, uranium, nickel, cobalt, base metals and lithium.

Lavery is a licensed Professional Geologist in the Province of Quebec and brings both strong technical and management skills to the company. He has served as a senior officer and director for other public and private companies and is a lifetime member of the Prospectors and Developers Association of Canada.

Giovanni Gasbarro has served as President and CEO and Director of Seahawk Ventures since February 11, 2016, and as a Director of the company since September 26, 2014. Previously, he was employed as an investment advisor for almost 25 years with two Vancouver-based firms and has significant market and financial expertise. He was instrumental in bringing many IPOs and capital pool companies to market, four of which have gone on to be acquired by other companies. He has helped raise over $250 million in both primary and secondary financings over his career.

Bruno Gasbarro has served as CFO since May 26, 2010, and as a Director since the company’s inception in January 2007. Since 2003, he has been instrumental in the creation of several IPOs and capital pool companies. He has served on many public company boards and has held various positions including President and CEO, CFO and Director. He was also an investment advisor for 10 years with a Vancouver-based firm.

Since May 1985, Salvatore Giantomaso is the Vice President of Newway Forming Ltd. and has previously served as the company’s President and CEO and a director. He has also served on many other public company boards over the years and brings a wealth of knowledge and experience to the company.

Since March 2002, Blair Holliday has been the Manager of Sales for Excell Railing Systems Ltd. He has served on several public company boards over the years and brings his knowledge and experience of public markets to the company.

The information contained here is for information purposes only and is not to be construed as an offer or solicitation for the sale or purchase of securities. Readers should conduct their own research for all information publicly available concerning the company. Prior to making any investment decision, it is recommended that readers consult directly with Seahawk Ventures Inc. and seek advice from a qualified investment advisor.