Making the Next Significant Discovery in the Bathurst Mining Camp

This Puma Exploration profile is part of a paid investor education campaign.*

As mineral exploration companies across Canada seek new mining locations, one location stands out every year as a top contender. New Brunswick is a province rich in natural resources with mining-friendly policies, substantial infrastructure, a comprehensive regulatory regime and a competitive tax regime. Each year, New Brunswick ranks among the top places in the world for mineral exploration in the Fraser Institute’s Annual Survey of Mining Companies.

New Brunswick is home to the Bathurst Mining Camp (BMC) which is one of the most prolific mining camps for base metals in Canada. The BMC hosts 46 mineral deposits of which 25 comprise reserves of 1 million tonnes or more. The BMC also hosted the Brunswick #12 mine, one of the largest underground zinc mines in the world. As a result, companies with mineral projects in New Brunswick’s Bathurst Mining Camp will likely be of particular interest to investors seeking upside potential.

Puma Exploration Inc. (TSXV:PUMA,OTC:PUXPF) is a Canadian mineral exploration company focused on developing a portfolio of high-grade precious and base metals projects located near and inside the prolific Bathurst Mining Camp in New Brunswick, Canada. The company is led by a highly experienced management team with decades of experience in mining exploration and development. In 2014, the company received the Prospector of the Year award from The New Brunswick Prospectors and Developers Association. 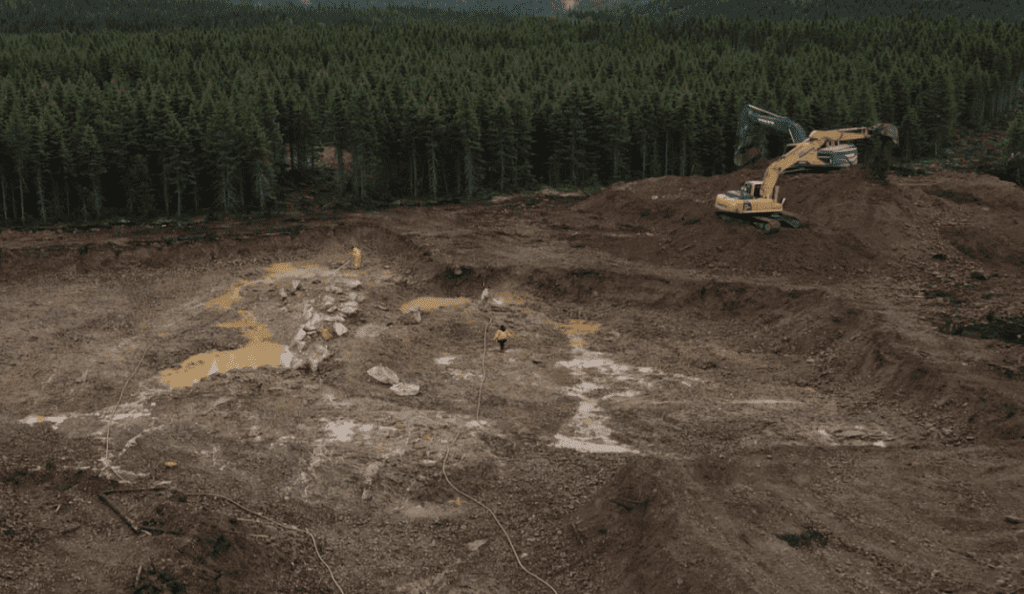 “We have found the best hole ever, it’s a dream come true,” said CEO of Puma Exploration Marcel Robillard.

In September 2021, the company announced impressive initial drill results of 5.55 gpt of gold over 50.15 metres from the surface of its 20,000-hectare Williams Brook Gold property. The notable property is a major discovery for Puma Exploration and is fully controlled by the company. In October 2021, the company announced high-grade gold assays recovered from its 2021 field exploration surface sampling program on its Williams Brook Gold property. The results include 199 g/t Au, 192 g/t Au, and 170.5 g/t Au. he company also drilled 1.00 g/t Au over 40.6 Meters extending the gold mineralised zone Into the sediments 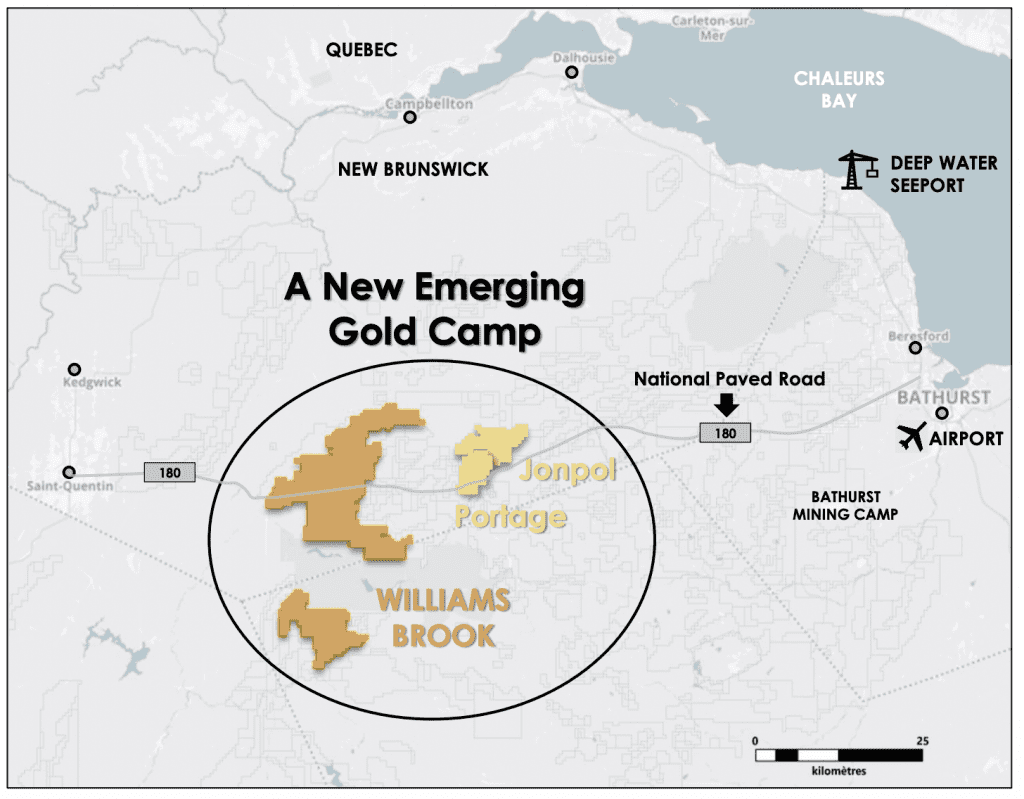 Great efforts will be made by the company in the coming years to deploy its DEAR strategy (Development, Exploration, Acquisition and Royalties) to generate maximum value for shareholders with low shares dilution. 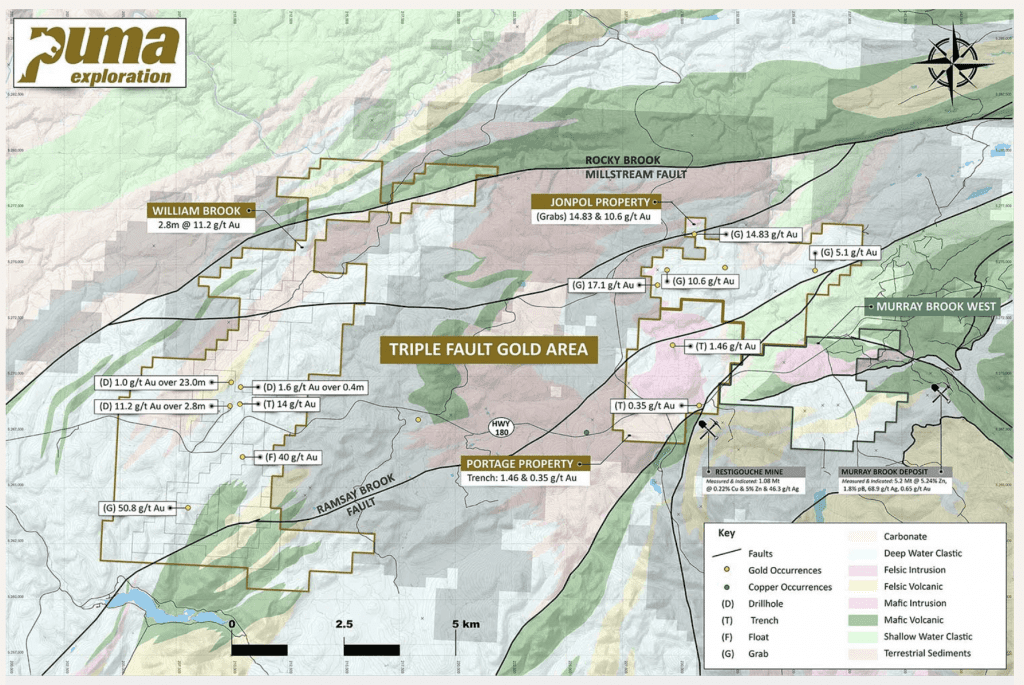 The most notable property is Williams Brook which is a major gold discovery. The 100 percent controlled Williams Brook is over 20,000 hectares and features many gold occurrences over 10 gpt with significant high-grade gold veins and three known gold trends. The drilling program on Williams Brook for 2021 has already been completed with assay results currently underway on 18 drill holes. The 2021 drill program returned an impressive 5.55 gpt of gold over 50.15 metres. The 2021 field exploration surface sampling program identified more high-grade gold veins with up to 199 gpt of gold. The company is currently continuing an aggressive exploration program on the O’Neil gold trend on the Williams Brook Gold property. 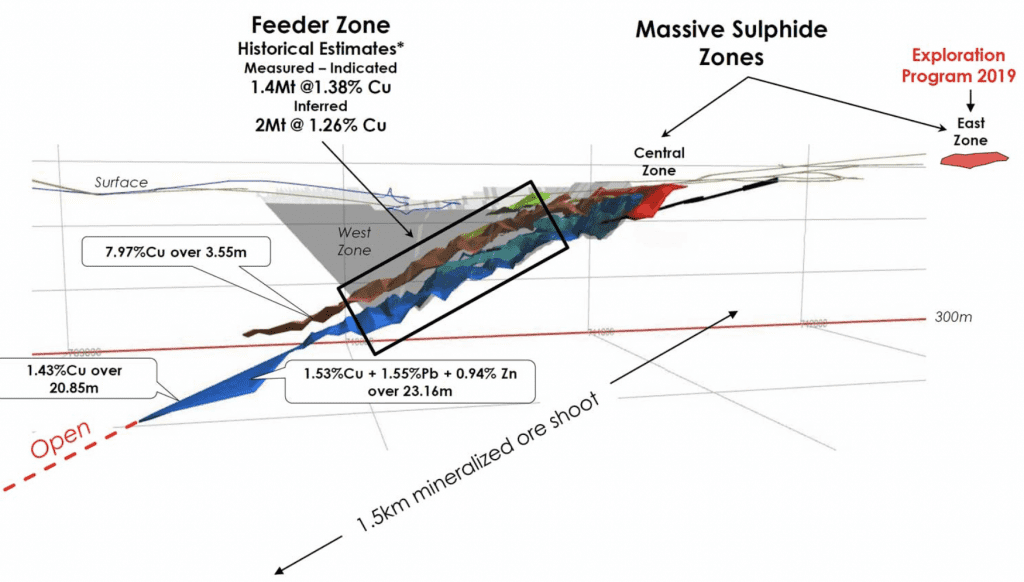 The Chester project is a 3,600-hectare copper project located 25 kilometres southwest of three significant deposits. These three notable VMS deposits are owned by Trevali Mining (TSX:TV) and include Halfmile Lake, Stratmat and Health Steele. The property features near-surface copper deposits in three zones, including the Central Zone, the East Zone and the West Zone (Copper Stringer).

The Legacy project is a 499.4-hectare copper project consisting of two blocks of claims in Restigouche County, New Brunswick. The project is approximately 100 kilometres west of Bathurst and approximately 40 kilometres from Saint Quentin. The property is owned under the company’s wholly-owned Murray Brook Minerals Inc. subsidiary. The property features the notable Legacy deposit, two main prospect zones which are Hornfels and J.J. Gold and several other geophysical targets.

A historical resource of 1,040,000 tonnes at grades of 0.74 percent of copper and 5.15 gpt of silver was estimated by SKR Consulting in 2015. Mineralization on the property is contained in three steeply dipping mineralized zones varying from 1.5 metres to 12.1 metres in width. The drilling and resource model on the Legacy project indicates that the mineralization continues with depth and that additional tonnage could be delineated with additional drilling. 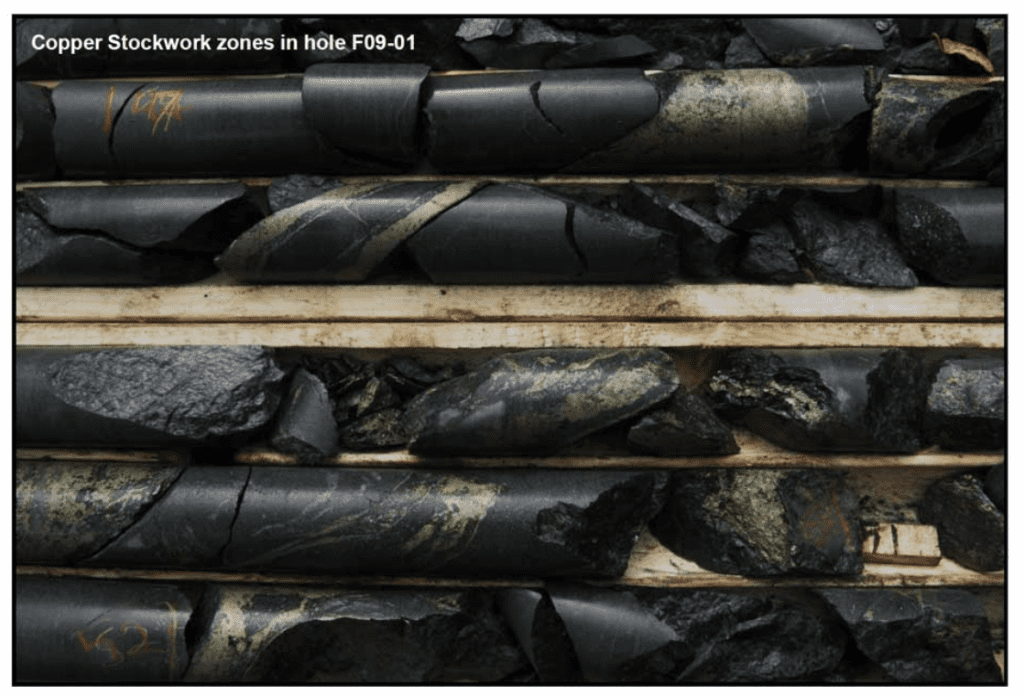 Drilling by Esso Minerals in 1983 identified a historical resource of 1.4 to 2.0 million tonnes at grades of 1.5 percent copper and 4 percent zinc. The historical resource estimate was based on the Powerline and Zinc Zone deposits only. To date, approximately 100 holes have been drilled on the deposit which has returned an impressive 25,000 metres of core.

In 2013, Puma Exploration discovered the Dragon Zone on the Turgeon property which is approximately 200 metres south of the Powerline and Zinc Zones. Drilling on the property in 2013 returned substantial sulphides at grades of 1.01 of copper and 0.78 percent of zinc. Drilling on the property in 2014 found grades even higher at 5.66 percent of zinc, 0.38 percent of copper and 2.3 percent gpt of silver. Further drilling found zinc as high as 10.05 percent. 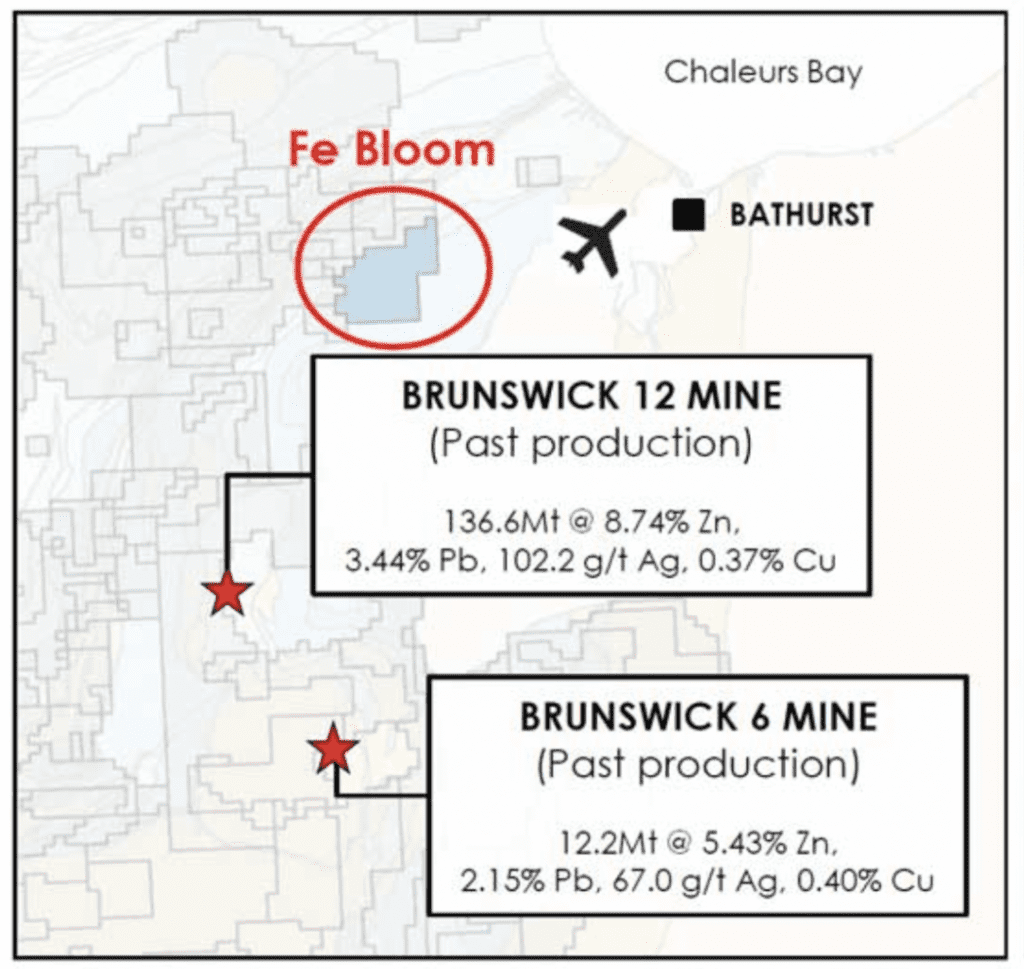 The Brunswick CARDS project is a copper project that is located north of the Chester project and southeast of the past operating East Steel mine. The property is owned under the company’s wholly-owned Murray Brook Minerals subsidiary. Brunswick CARDS was secured with a prospector and a private company with the CARDS system that was developed by Windfall Geotek (TSXV:WIN).

The Murray Brook West project is a grassroots copper project that hosts two anomalous zone discoveries. The property is owned under the company’s wholly-owned Murray Brook Minerals Inc. subsidiary. Trenching was conducted on the property in 2018 with 138 samples collected. In the same year, induced polarization and resistivity geophysical surveys were completed on 28/1 kilometre lines.

Marcel Robillard – CEO, President and Chairman of the Board

Marcel Robillard is a geologist who graduated in 1993 from the University of Quebec in Montreal. He also holds a Master of Earth Sciences obtained in 1995. From 1998 to 2007, he acted as a project geologist and project manager for Géominex which is a consulting firm in geology and mining exploration. Since 2007, Robillard has been on the board of directors of Puma Exploration (PUMA:TSX-V) in addition to being CEO of Puma Exploration since 2010.

Richard Thibault has a B.Sc. in Mining Engineering from Queen’s University in Canada. He is a Professional Engineer (P.Eng.) with over 40 years of mining experience in engineering, operations, management and consulting. Thibault’s experience is in North and South America and Southeast Asia. Thibault is the president and principal engineer at AVOT Consulting Inc. Currently, he is on a long-term assignment for MUZO Emeralds as VP of Colombian Shared Services and director of mines in Colombia. Before this, he was group chief operating officer of mining at Malaysia Smelting Company Bhd. and senior general manager of its subsidiary Rahman Hydraulic Tin Sdn. Bhd. Thibault was also the CEO of Asian Metal Mining Consultancy in Malaysia. From 2008 to 2013, he was chief executive officer and director of Antioquia Gold Inc. (AGD-V) which is a publicly traded company with mining interests in Colombia.

From 1997 to 2006, Thibault worked in Argentina, Bolivia, Chile, Colombia, Ecuador, Mexico, Panama, Peru and Venezuela. While based in Buenos Aires, Argentina, he held the position of president at High American Gold Inc. which is a publicly-traded junior mining company. He also held the position of managing director at Procesadora de Boratos Argentinos S.A. (PBA) which is a private industrial mineral company. In Santiago, Chile, he was the general manager of the consulting firm BGC-AVOT Engineering Inc. From 2006 to 2007, he held the position of vice president of minerals at Daleco Resources Corp. which is a United States-based publicly traded company. Before moving to South America, he worked for Fording Coal Ltd., a Canadian company, in progressively responsible positions.

Ginette Gosselin Brisson is a graduate of the University of Quebec at Rimouski (UQAR) and is a Chartered Professional Accountant (CPA) with more than 40 years of experience in auditing public bodies, manufacturing companies and service companies. Since 2014, she has been employed by Puma Exploration Inc.

The information contained here is for information purposes only and is not to be construed as an offer or solicitation for the sale or purchase of securities. Readers should conduct their own research for all information publicly available concerning the company. Prior to making any investment decision, it is recommended that readers consult directly with Puma Exploration and seek advice from a qualified investment advisor.