This FPX Nickel profile is part of a paid investor education campaign.*

Nickel plays a vital role in electric vehicle (EV) and battery manufacturing, a sector that sees rapid expansion year after year. Market research projects a growing nickel demand to reach upwards of 1.3 million metric tonnes per annum by 2030 as nickel content in electric vehicles increases to over 40 kilograms per car battery.

Despite its significant role in powering a global shift to greener energies, analysts also project an undersupply of nickel for the next several years due to decreasing production and a lack of new active mines. Mining companies operating high-grade nickel projects offer investors exposure to a market that has great economic growth and success potential.

The Decar Nickel District hosts the Baptiste project, which leverages an existing 2020 Preliminary Economic Assessment (PEA) and mineral resource estimate. Together, these NI 43-101 compliant reports show the Baptiste project has the potential to become one of the world’s largest-scale, lowest-cost nickel producers. The positive geological interpretation of the Van target at Decar offers further blue sky potential for the Decar property.

The Decar Nickel District project has the potential to mimic the successes of its geographic neighbors such as New Gold’s (TSX:NGD, NYSEMKT:NGD) CAD$1.8 billion Blackwater Gold open-pit project, which recently received federal and provincial environmental assessment certificates, a key milestone on the path to becoming a fully-permitted mine.

FPX Nickel released an updated PEA for the Baptiste project in 2020. According to the report, at the PEA base case of US$7.75 /lb nickel, the Baptiste Project is expected to generate an after-tax net present value of US$1.7 billion and an after-tax internal rate of return of 18.3 percent.

Additionally, the company closed $16.1 million in a bought deal public offering in April 2021. FPX Nickel intends to put net proceeds of the financing towards the exploration and development of the Baptiste nickel project.

The Baptiste project presents FPX Nickel with the potential to produce refined nickel with a significantly lower carbon footprint than other sources of production in the global nickel industry. Recent leach testing of awaruite nickel concentrates produced from Baptiste achieved nickel recoveries of 98.8 percent to 99.5 percent in producing a high-purity chemical solution containing 69.4 to 70.1 g/L nickel.

One of FPX Nickel’s long-term goals for the Baptiste project is to build a carbon-neutral mining operation. In keeping with that goal, FPX Nickel and mining companies such as Anglo American majority-owned (LSE:AAL,OTCQX:AAUKF) DeBeers and Canada’s Government has co-founded a multi-university led research program aimed at studying carbon capture and storage at mining sites. 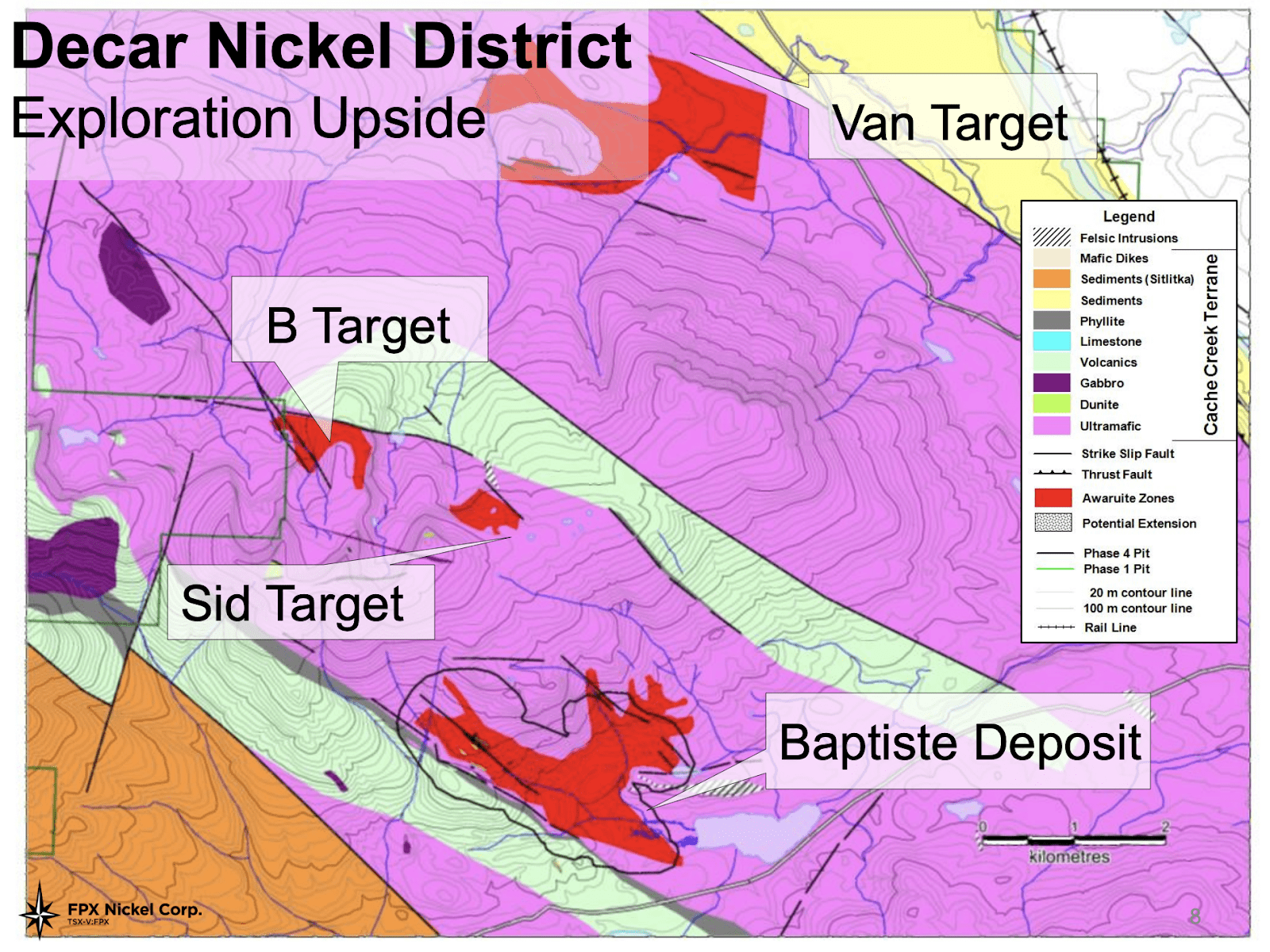 FPX Nickel’s management team consists of highly experienced capital markets and mining professionals, including chairman of the Board, Dr. Peter Bradshaw and director Rob Pease. With nearly five decades of mineral exploration experience across 30 countries, Dr. Bradshaw has made numerous key discoveries earning him the honorable distinction of being a Member of the Canadian Mining Hall of Fame.

Additionally, geologist Rob Pease has more than 30 years of experience in exploration, mine development and construction, including as the former CEO of Terrane Metals during the development of the Mt. Milligan copper-gold mine was later acquired by Thompson Creek for C$650 million. Pease also served as the former director of Richfield Ventures, which was acquired along with the Blackwater Gold project by New Gold for CAD$500 million. 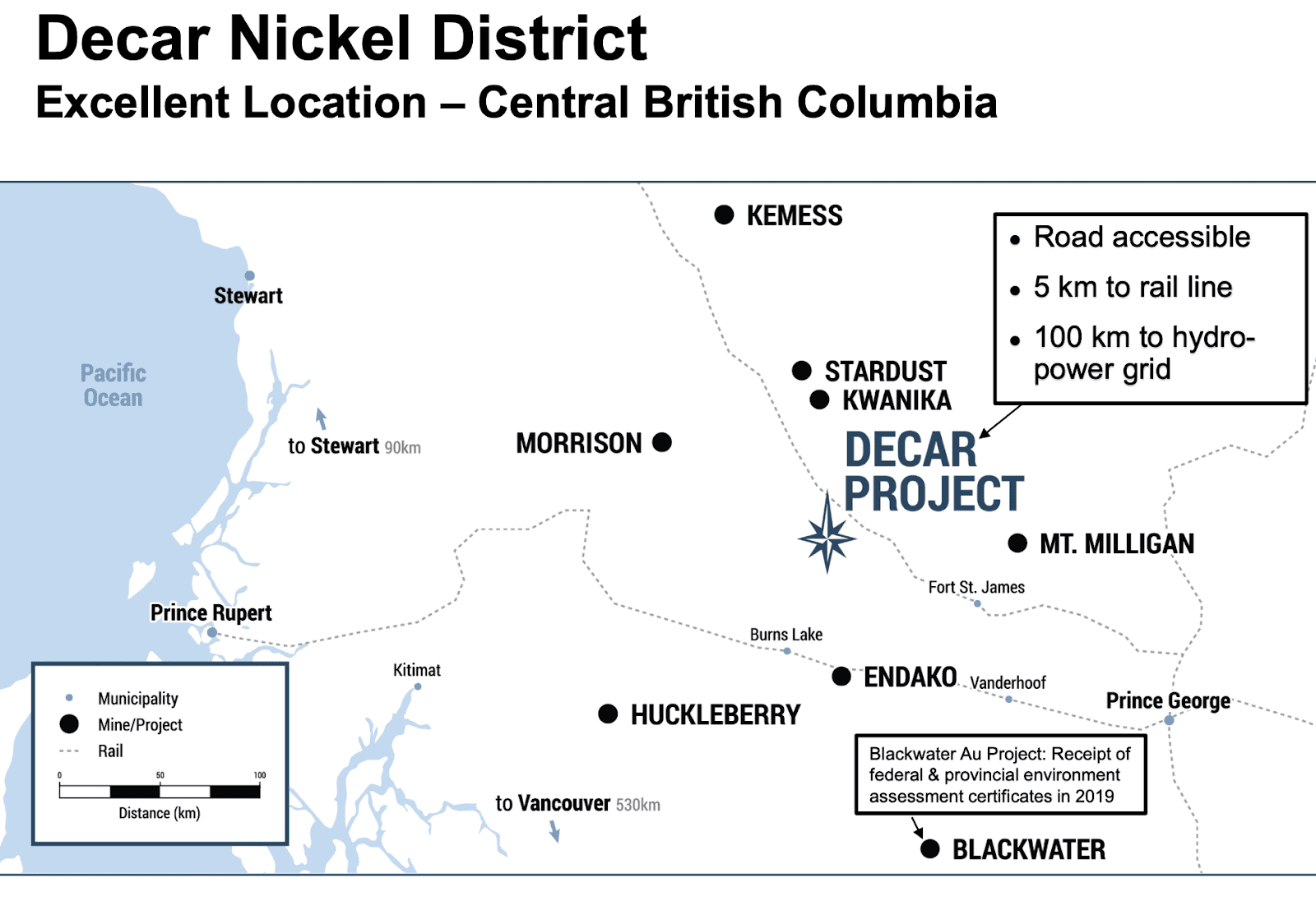 The Decar Nickel District covers 245 square kilometers and 80 kilometers west of the Mt. Milligan mine, central British Columbia. The property hosts the highly prospective Baptiste nickel project, which has the potential to become the world’s best development-stage nickel project. The asset is accessible via logging and paved road, with railway and hydropower nearby.

In February 2021, the company released results from initial field tests, demonstrating the potential for significant direct air carbon capture in the tailings on the property. “These exciting results mark an important step in our objective to develop Baptiste as the world’s first large-scale, carbon-neutral nickel operation,” commented FPX Nickel president and CEO Martin Turenne. 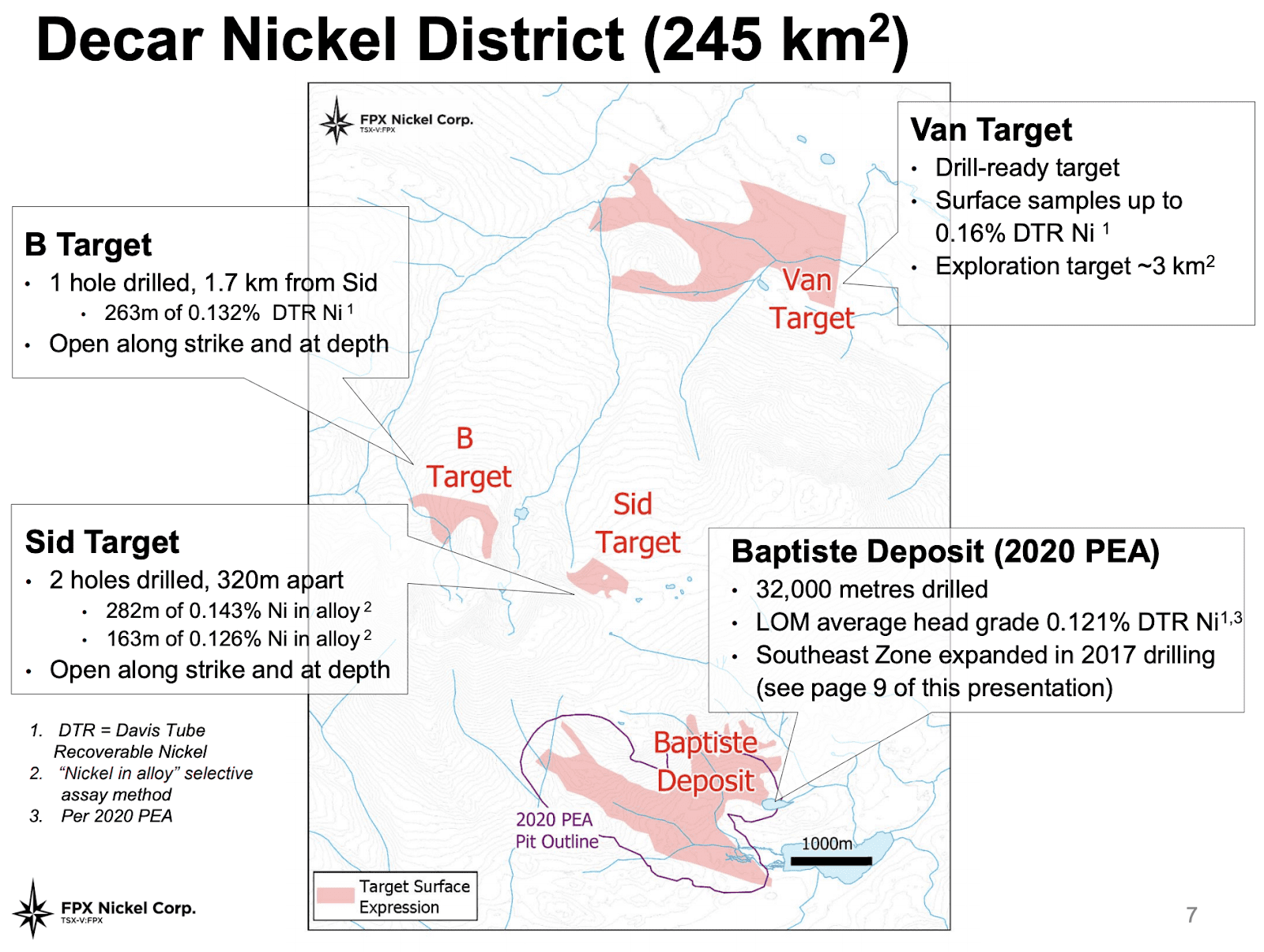 Since 2010, FPX Nickel has spent approximately CAD$25 million in the exploration and development of Decar. The company put this funding towards surface sampling, PEA reporting, processing plant construction and diamond drilling campaigns.

Martin Turenne is a senior executive with over 15 years of experience in the commodities industry, including over five years in the mining industry. He has extensive leadership experience in strategic management, fundraising, economic analysis, financial reporting, regulatory compliance and corporate tax. Turenne formerly served as CFO of First Point Minerals Corp. from 2012 to 2015 and in positions at KPMG LLP and Methanex Corporation. He is a member of the Canadian Institute of Chartered Accountants.

Ms. Wilson has over 18 years' experience in exploration, resource and mine geology. In her previous role as the Chief Mine Geologist for Pure Gold Mining, she had oversight and responsibility for mine site geological and block models, working with senior management in developing geological work programs and managing a strong safety culture in compliance with company policies and occupational health and safety regulations. Prior to joining Pure Gold Mining, Ms. Wilson worked in a number of roles for Goldcorp and Newmont at the Red Lake Gold Mines for nine years. As the lead Exploration Geologist and Production Geologist at the Couchenour Project, she developed and managed multi-million dollar work programs, supervising geological site personnel and integrating drill results for the growth of mineral reserves and resources at the project.

Trevor Rabb is a professional geologist with over ten years of experience in mineral exploration, including over five years specializing in nickel-iron alloy deposits. Rabb formerly served as First Point’s senior geologist and VP of Exploration from 2010 to 2016. He was a crucial player in exploration discoveries for First Point’s Decar, Mich, Wale and Klow properties.

Christopher Mitchell is a business consultant with more than 40 years of experience in the mineral industry. He served as senior VP of Viceroy Resource Corp., executive VP and CFO of Orvana Minerals Corp. Mitchell holds MBA and M.Sc. degrees, University of British Columbia and is a member of the Association of Professional Engineers of British Columbia. He is also a director of Endurance Gold Corp.

Rob Pease is a geologist with over 30 years of experience in exploration, mine development and construction. He served as the former CEO of Terrane Metals, acquired by Thompson Creek for CAD$650 million. Pease also served as the former director of Richfield Ventures, acquired by New Gold for CAD$500 million. He is a Director of Pure Gold Mining Inc. and Liberty Gold Corp.

William Myckatyn is a mining engineer with over 34 years of experience in the mining industry. Myckatyn is the founder and CEO of Quadra Mining Ltd. He served as chairman and subsequently co-chairman of Quadra FNX Mining until its takeover in 2012. Prior, Myckatyn was chairman, president and CEO of Dayton Mining Corp., where he led the restructuring and merger with Pacific Rim Mining Corp. He also served as the former president and CEO of Princeton Mining and Gibraltar Mines Ltd. For over 17 years, he worked for various operations controlled by Placer Dome Inc. and its associated predecessor companies, including four separate mines in Australia and the Philippines. He is a director of San Marco Resources and OceanaGold.

Dr. John McDonald is a geologist with more than 40 years of international experience as both a professor and mineral explorer. He served as VP of Exploration for both Diamondex and Winspear Diamonds Inc. He and his technical team were directly responsible for discovering and developing the Snap Lake diamond deposit. De Beers acquired Winspear’s majority ownership in the Snap Lake deposit for US$305 million in 2000. In 2000, McDonald received the HH “Spud” Huestis Award for excellence in prospecting and mineral exploration from the B.C. and Yukon Chamber of Mines. In January 2008, he received the Hugo Dummett Diamond Award for Excellence in Diamond Exploration and Development. He is a director of Canterra Minerals Corp., Hudson Resources Inc.and Independence Gold Corp.

The information contained here is for information purposes only and is not to be construed as an offer or solicitation for the sale or purchase of securities. Readers should conduct their own research for all information publicly available concerning the company. Prior to making any investment decision, it is recommended that readers consult directly with FPX Nickel Corp and seek advice from a qualified investment advisor.

The information contained here is for information purposes only and is not to be construed as an offer or solicitation for the sale or purchase of securities. Readers should conduct their own research for all information publicly available concerning the company. Prior to making any investment decision, it is recommended that readers consult directly with FPX Nickel and seek advice from a qualified investment advisor.