This FireFox Gold Corp is part of a paid investor education campaign.*

FireFox Gold Corp (TSXV:FFOX,FSE:A2PDU7) is a resource exploration company with a portfolio of highly-prospective gold projects in Finland. FireFox Gold is a leading tenement holder and one of only a handful of companies actively exploring for gold in Finland’s Central Lapland Greenstone Belt (CLGB). The CLGB is an under-explored orogenic gold belt comparable in size to some of the world’s most notable gold-bearing greenstone belts, and the site of a new gold rush. The gold belt may be under-explored, but Finland’s mining industry is well established. The Nordic nation consistently ranks as one of the world’s top mining jurisdictions.

Recent notable discoveries made in the belt by Rupert Resources Ltd (TSX:RUP) and Aurion Resources Ltd (TSXV:AU) are driving a gold rush atmosphere. These discoveries have attracted the interest and investment from major players including Agnico Eagle Mines (NYSE:AEM,TSX:AEM), Kinross Gold Corporation (TSX:K,NYSE:KGC) and B2Gold Corp. (TSX:BTO). Agnico Eagle owns the Kittilä underground gold mine, located in the CLGB, which has gold reserves of 4.4 million ounces, produces about 175,000 ounces of gold annually and has a 17-year mine life.  Kinross, B2Gold and others have entered the field via agreements with the tenement-controlling juniors.  In March 2021, FireFox expanded its tenements holdings to over 800 square kilometres in strategic locations for gold exploration within the CLGB, creating new opportunities for advancement through both exploration and strategic partnerships.

FireFox Gold’s flagship property, the Jeesiö gold project, may offer a springboard to further discoveries in the CLGB. At Jeesiö, FireFox is exploring two high-priority target areas that are bracketed by Aurion’s Risti and Launi gold discoveries. The company’s 2021 program for Jeesiö started with the first extensive bottom-of-till (BOT) sampling to test below the glacial cover at the Utsamo target, where early sampling returned up to 4.6g/t gold at surface. Results from this work, combined with the 2020 detailed geophysics, is expected to identify priority drill targets for the follow-up diamond drilling program. Detailed BOT sampling combined with geophysics is a demonstrated exploration path that has led to target delineation and discovery in other parts of the CLGB.

FireFox Gold is led by a team of capital market and mining professionals including Finnish team members well versed in the nation’s mining laws and geologic potential. 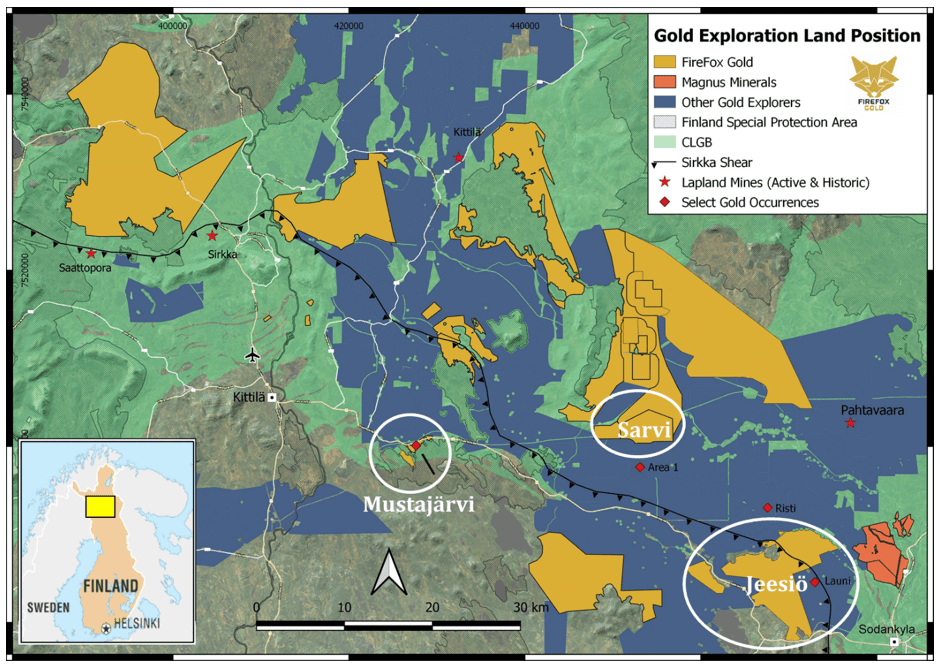 The CLGB is comparable in size to other major greenstone belts, such as Canada’s Abitibi, Western Australia’s Norseman-Wiluna and the Zimbabwe Craton. However, by 2015 only 9.1 million ounces of gold resources had been delineated across 13 gold deposits. According to a 2015 study on the Central Lapland Greenstone Belt, there remains significant potential for million-ounce deposits in the area due to the lack of exploration up to this point.

The dearth of exploration is due to the fact that prior to joining the European Union in 1995, foreign companies could not hold a majority share in an exploration or mining company. All exploration and exploitation was completed via state-owned companies such as Outokumpu. The end result was limited gold exploration. In many cases when gold was discovered (whether in soil sample, rock chips, or drilling), it was rarely followed up.

This lack of exploration was underscored by a comment made by FireFox Gold’s Chairman, Patrick Highsmith, in 2005: “Newmont drills more for gold in one year in Nevada alone than has ever been spent on gold drilling in the history of the CLGB”.  This is also one of the reasons Mr. Highsmith decided to aid in founding FireFox Gold. 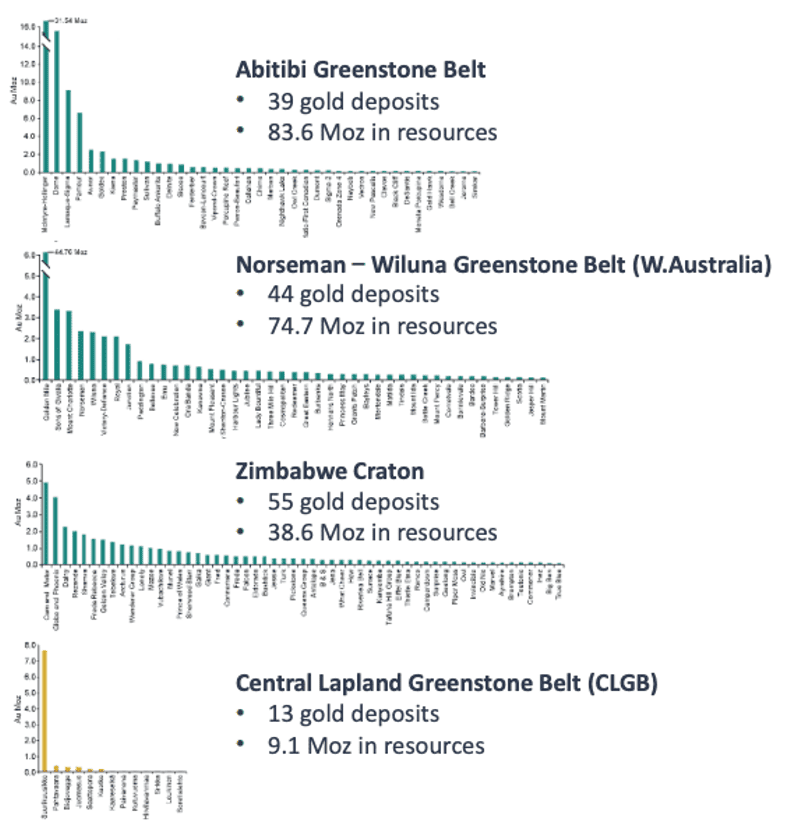 With new discoveries now starting to be made, the FireFox team believes that it is only a matter of time before significant gold deposits are delineated in this part of Finland, and that the companies that control the most prospective ground have the best chance for value creation.

Located in Finland’s northernmost province of Lapland, Jeesiö gold project shares an address with many of the recent gold discoveries in the country’s Central Lapland Greenstone Belt.

The 100% held Jeesiö gold project hosts multiple orogenic gold targets and is positioned along the Sirkka Shear Zone, a major crustal structure that cuts through the CLGB and controls the emplacement of the majority of the orogenic gold deposits in Lapland.

The Jeesiö property’s prospectivity for gold was first identified by GTK (Finnish Geological Survey) during a country-wide reconnaissance till sampling program between 1983 and 1991. Further early-stage exploration work by Outokumpu and the GTK between 1990 and 2006 generated additional data supporting continuing gold exploration on the property. This work was never followed up. 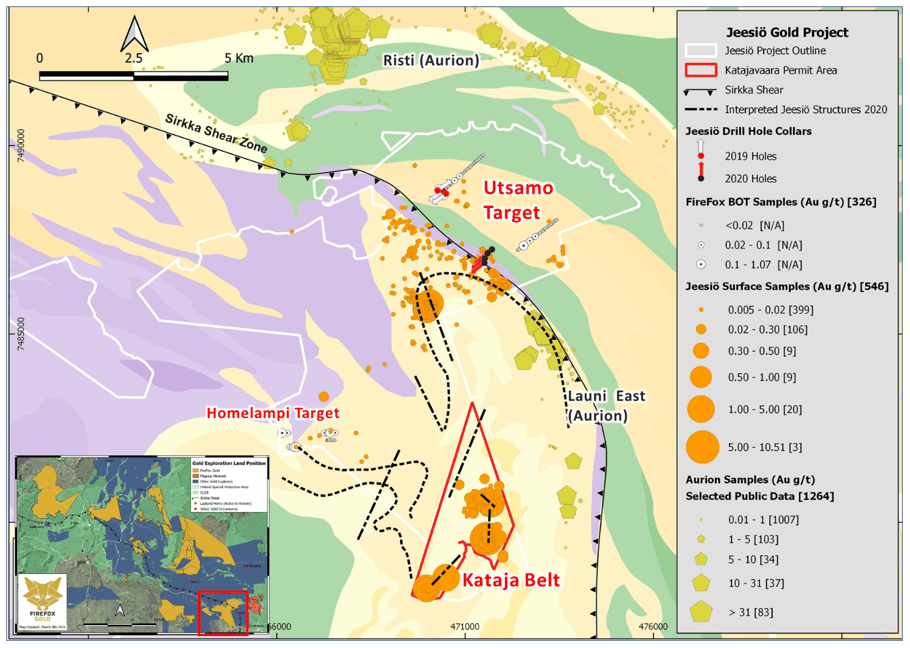 Since acquiring the property in 2017, FireFox has performed reconnaissance till sampling, BOT sampling, ground-based and UAV geophysical surveys, geochemical sampling programs, bedrock sampling and mapping, trenching and reconnaissance drilling. The work has led to the identification of numerous prospective targets at Jeesiö including the high-priority Utsamo and Katajavaara.

The Utsamo target is located directly between Aurion’s recent Risti and Launi gold discoveries. Surface sampling programs at Utsamo have returned numerous gold anomalies at surface, up to 4.6 g/t gold, and the main trend is believed to be situated on the Sirkka Shear Zone.

FireFox is highly encouraged by the results at both prospects, especially as both Utsamo and Katajavaara have had limited work to date in comparison with neighboring discoveries.

FireFox is advancing both prospects in 2021 with detailed work programs including drilling.

The 100% held Mustajärvi gold project is situated within the CLGB and along the Venejoki Thrust Zone in Finland’s Lapland province. The project came with an extensive historic database including till anomalies from GTK (The Finnish Geological Survey) and Outokumpu as well as 12 diamond drill holes by Outokumpu and small-scale gold exploitation by a local prospector in the Central Zone.

Since 2018, FireFox Gold has completed BOT sampling, channel sampling, geologic mapping, geophysics, trenching and drilling that has delineated hige-grade gold over more than 1.5 kilometres of strike. FireFox first drilled the Central Zone in late 2018 and confirmed high-grade gold mineralization to greater depths than previously targeted. The Phase 1 program discovered a new style of high-grade gold at depth and included intercepts of 22.89 g/t gold over 3.95 metres, including 2 metres at 45 g/t gold. FireFox continued systematic exploration work in 2019, including a second drill campaign that identified new high-grade gold mineralization more than 500 metres to the northwest of the Central Zone, including an interval of 12 g/t gold over 1.95 metres. 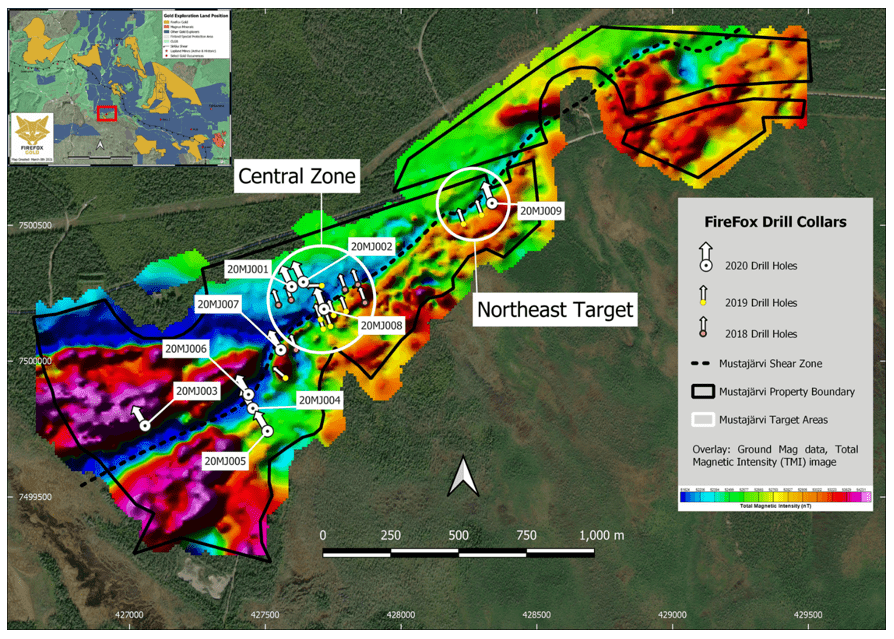 The third program, completed in the fall of 2020, included additional trench sampling followed by drilling that further expanded the strike of high-grade gold, including a new interval of 2 metres averaging 33.25 g/t gold in hole 20MJ009.

Carl Löfberg has a Master’s degree in Industrial Economics and broad experience in business consulting, project management, company start-ups and financing. Mr. Löfberg is an economist and precious metals investor, and an expert in hard currency and contrarian business strategy. He has been Managing Director for Magnus Minerals since 2006.

Patrick Highsmith is a professional geologist and mining executive with experience on +300 projects around the world for companies such as Newmont, BHP, Rio Tinto, Fortescue Metals Group, Lithium One, Pure Energy Minerals, and others. He has led teams through creative transactions, new discoveries, scoping & prefeasibility studies.  He is a veteran of  the capital markets who has worked in Finland since 2005.

Joe Mullin is CEO & Director of QuestEx Gold & Copper Ltd., a Partner & Director of Mount Arvon Partners LLC and an Independent Director of Industrial Metals and Pure Energy Minerals Limited. Mr. Mullin has over 20 years experience in corporate finance, private equity, restructuring, resources & consulting. He formerly was a Financial Analyst at Goldman Sachs, a Private Equity Analyst at WL Ross / Invesco Ltd. and a Portfolio Manager at Millennium Global Investments Ltd.  He has a B.A. from Harvard University.

Timo Mäki is an experienced geologist who resides in Finland. He was most recently the Chief Geologist at First Quantum’s Pyhäsalmi Mine, where he worked from 1988-2018. He is credited with the discovery of the Mullikkoräme zinc deposit in 1987 and Pyhäsalmi deep deposit in 1996.

Dr. Hönig has 12 years exploration experience, with a strong background in structural geology and interpretation applied to a variety of deposit types, including orogenic and intrusion-related gold. He acted as chief geologist, project manager and project geologist, for projects ranging from grass roots to advanced stage.

Dr. Petri Peltonen has more than 25 years of experience in geoscientific research, exploration and mining. Most recently, he was engaged as Exploration Manager Europe for First Quantum Minerals Ltd. He is an accredited Chartered Professional of Australian Institute of Mining & Metallurgy (AusIMM), European Geologist (EurGeol), and SEG Fellow. He also serves as Professor of Practice of Economic Geology at the University of Helsinki.

Dr. Richard Goldfarb has more than 40 years of experience as an exploration geologist, researcher and professor. He is a world-renowned expert on the geology of gold deposits with an emphasis on orogenic gold. Dr. Goldfarb’s specialty is target generation and optimization in greenfields exploration for orogenic gold. In addition to operating a well known geological consultancy, he is a Research Professor at the Colorado School of Mines as well as a Fellow and former President of the Society of Economic Geologists.

Quinton Hennigh has worked with Newcrest Mining and Newmont Mining, and subsequently founded Novo Resources Corp, acting as its CEO and currently serving as Chairman. Among his notable project involvements are Novo’s conglomerate-hosted gold projects in the Pilbara, First Mining Gold’s Springpole gold deposit in Ontario, Kirkland Lake Gold’s acquisition of the Fosterville gold mine in Australia, the Rattlesnake Hills gold deposit in Wyoming, and Lion One’s Tuvatu gold project in Fiji.

Dr. Alf Björkund brings more than 50 years of experience in geoscientific research and application to mineral exploration in Scandinavia, Russia, Brazil, Portugal and Canada. Trained as an exploration geochemist, he is also a former chief geochemist for the Geological Survey of Finland. He has been a Professor of Geology at Abo Akademi University. He is a co-founder and CEO of SES Finland Ltd and former chairman of the Board for Magnus Minerals.

*Disclaimer: The profile provides information which was sourced and approved by FireFox Gold Corp (TSXV:FFOX,FSE:A2PDU7) in order to help investors learn more about the company. FireFox Gold Corp is a client of the Investing News Network (INN). The company’s campaign fees pay for INN to create and update this profile page, to which links are placed on Investingnews.com and channel newsletters.