This E3 Metals Corp. profile is part of a paid investor education campaign.*

E3 Metals Corp.’s (TSXV:ETMC,FWB:OU7A,OTC Pink:EEMMF) goal is to power the growing electrical revolution by producing battery-quality lithium products. The company is developing a project in Alberta, Canada, a location that’s advantageous for E3 because of the province’s depleted oil reservoirs that are full of lithium-enriched brine. E3 Metals combines a significant resource and a well-established local industry with its own proprietary direct lithium extraction (DLE) technology, giving the company the potential to deliver lithium to market in one of the best jurisdictions in the world.

In the fall of 2019, E3 Metals partnered with Livent Corp (NYSE:LTHM) to assist in the development and pilot of its direct lithium extraction process. The joint development agreement has Livent contributing up to US$5.5 million to fund this development and the pilot plant construction and operation.

The prolific and world class Leduc Reservoir hosts lithium enriched brine containing 6.7 million tonnes LCE inferred mineral resource delineated to date. The development of this resource through brine production is a well understood venture in Alberta, where this brine is currently being produced to surface through extensive oil and gas development.

The ability for E3 Metals’ DLE to obtain over 90 percent recovery and increase the concentration of lithium from approximately 80 mg/L to over 5000 mg/L, while reducing impurities by over 99 percent is the key to commercializing lithium production in Alberta from the Leduc.

E3 Metals’ lithium resource is located below surface in depleted oil reservoirs in Alberta that are full of lithium enriched brine. Alberta is home to an established oil and gas industry, with necessary infrastructure in place, a skilled talent pool and well-defined social license and permitting regime to support a streamlined development plan. Extracting this resource will require the use of the same wells used for oil production in addition to the company’s proprietary clean processing technology. This makes Alberta the ideal location for developing this project.

E3 Metals has one of the largest lithium resources amongst its lithium peers with 6.7 million tonnes (Mt) of lithium carbonate equivalent (LCE), hosted in the world class Leduc Reservoir. This covers only a third of the company’s permit area in south-central Alberta. The Leduc is well known for its ability to produce fluids and allows the company to continually expand its production into the future.

E3 Metals’ proprietary primary extraction process has an extremely high affinity for lithium over other elements in lithium brines. This allows E3 Metals’ DLE technology to quickly and efficiently remove lithium from brine, without the use of evaporation ponds, that produces a high grade, high purity lithium concentrate. This concentrate can be processed using conventional methods into high value lithium products. 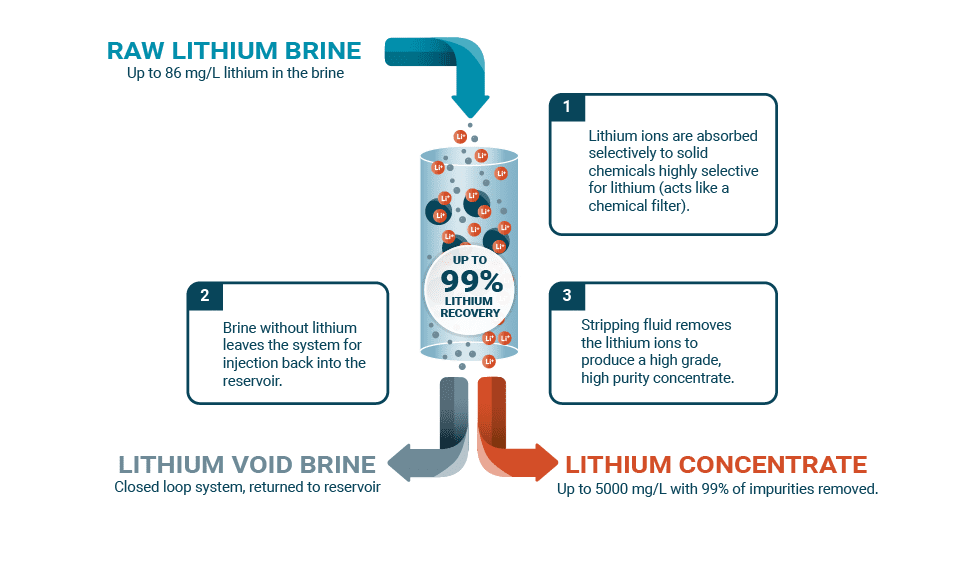 Lithium-ion batteries are powering the electrical vehicle (EV) revolution, with manufacturers projected to bring over 300 million EVs to market by 2025. Analyst forecasts demonstrate lithium production must increase over 500 percent in the next decade to meet this explosive growth, and nations around the world have designated lithium a critical mineral, essential for their economies.

E3 Metals has partnered with leading lithium developer and producer, Livent Corporation, to advance its proprietary DLE technology. E3 Metals and Livent are advancing the technology to demonstrate commercial readiness and then will construct a pilot plant to produce its lithium concentrate at a larger scale. The result of this stage will support E3 Metals in moving the Alberta Lithium Project towards commercialization.

E3 Metals is developing a lithium brine project utilizing DLE processes. With simplified commercializing by building on the backbone of the oil and gas industry in Alberta, the company is working towards a pilot, planned for 2021. Once past this critical stage in the project development, E3 Metals will complete the construction decision of 20,000 t/year of lithium outlined in a pre-feasibility report.

In the fall of 2019, E3 partnered with Livent Corp (NYSE:LTHM) to assist in the development and pilot of its direct lithium extraction process. The joint development agreement has Livent contributing up to US$5.5 million to fund this development and the pilot plant construction and operation.

E3 Metals has one of the largest lithium resources amongst its lithium peers with 6.7 million tonnes of lithium carbonate equivalent (LCE), hosted in the world class Leduc Reservoir.

E3 Metals’ proprietary primary extraction process has an extremely high affinity for lithium over other elements in lithium brines. This allows E3 Metals’ DLE technology to quickly and efficiently remove lithium from brine, without the use of evaporation ponds, that produces a high grade, high purity lithium concentrate. This concentrate can be processed using conventional methods into high value lithium products. 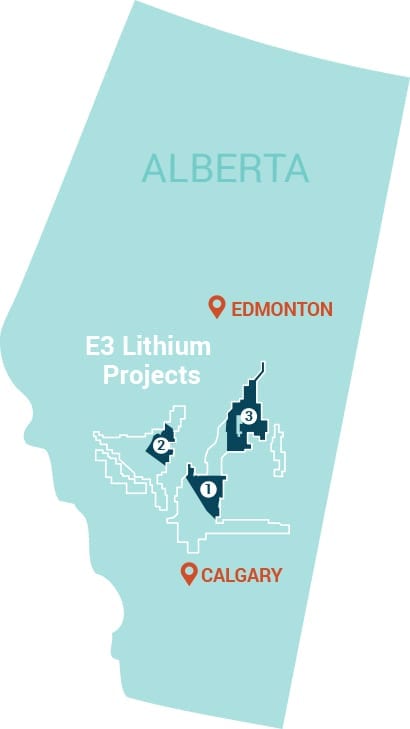 The Leduc Reservoir is world-renowned for its unique properties and has seen 70 years of historical oil and gas development in the area. Lithium-enriched brine occurs as lithium-ions dissolve in the formation water.  Of the fluid contained within the Leduc Reservoir, over 95 % is lithium-enriched brine. The remaining 5% contains hydrocarbons, or oil and gas, which have been largely depleted from the reservoir.

The lithium contained within the lithium-enriched brine exists 2,500 meters below the surface and beneath the buoyant oil and gas accumulations throughout the entire reservoir. The reservoir allows for large quantities of fluid to be trapped in the rock and can move large volumes of liquid to the surface. A single vertical well could produce up to 20,500 cubic meters of water per day. Historical testing for lithium in the reservoir returned anomalous lithium values up to 140 milligrams per liter lithium throughout the formation water.

The brine within the reservoir also reaches temperatures between 70 degrees and 100 degrees Celsius. The temperature of the brine could be useful for generating geothermal electricity which can help decrease E3 Metals’ power costs and environmental impacts.

The inferred mineral resource estimate for the Clearwater Resource Area has been updated to 410,000 tonnes of elemental lithium, an increase of 14 percent based on a press release in November 2020.

Once E3 Metals pilots their DLE technology with Livent, the company anticipates moving rapidly towards commercialization. E3 Metals is developing on the backbone of the mature and sophisticated oil industry and their project will operate in a very similar manner. The skills and expertise are readily available, including the ability to repurpose existing infrastructure. Once in operation, E3 Metals’ Alberta Lithium Project will be one of the few to produce battery quality lithium from a stable jurisdiction with a well-established social license.

Chris Doornbos has a broad range of experience in developing mineral projects across the globe. This experience covers the spectrum from greenfields exploration to advanced project development. He has a strong technical background and has successfully driven projects through to the development stages including a very successful track record of expanding resources by using innovative and out of the box thinking. He has experience in capital raising both privately and publicly, assisted in the founding of public junior mining companies and the sale and acquisition of mineral properties. Doornbos emphasizes risk management, developing and managing an exceptional technical team and well-strategized project generation, with a clear focus on developing and capturing value for shareholders. He was the CEO/Director of Revere Development Corp. and Vice-President of Exploration for MinQuest Ltd.

Liz Lappin is a Professional Geologist with a solid background in capturing value from Alberta’s energy industry. She brings this experience to the E3 Metals team as she drives the technical team towards the development of our its lithium brine projects. As a great believer in collaboration, she is focused on maximizing asset value through technical excellence and creative cooperation between disciplines. Working across Western North America, Lappin has gained a foundation of technical experience with oil and gas majors such as Cenovus, Encana and Suncor. More recently, she was the founder and principal consultant at Castle Rock Consulting Ltd., which specializes in geothermal value creation for the energy industry in Canada. She is a Fellow of the Energy Futures Lab and received a Young Woman in Energy Award in 2017 for her dedication to challenging industry norms and pursuing a broader energy mix in Alberta.

Paul Reinhart brings over 30 years of experience in providing early-stage project financing and advisory services. His experience and expertise in the resource exploration business includes Kokanee Explorations, Far West Mining and Bearing Resources. He is currently CEO of Sora Capital Corp, an investment issuer focused on the technology industry. He is also President of Vanhart Capital Corporation, a privately held investment company, specializing in funding and advisory services for early-stage companies.

Mike O’Hara is an oil and gas executive and registered professional engineer with 35 years of experience in founding, developing and managing profitable, growth-oriented oil and gas companies. He has a solid track record in the evaluation, negotiation and acquisition of high-quality oil and gas properties and joint venture opportunities. Formerly, O’Hara was the President of Bernum Petroleum Ltd, President, Director and Founder of Xergy Processing Inc and CEO, President, Director & Founder of Calahoo Petroleum Ltd., a TSX listed E&P company, sold in 2000 to Samson Petroleum for approximately $130 million.

Peeyush Varshney has been actively involved in the capital markets since 1996 and has been a principal of Varshney Capital Corp., a private merchant banking, venture capital and corporate advisory firm since 1996. He obtained a Bachelor of Commerce degree (Finance) in 1989 and a Bachelor of Laws in 1993, both from the University of British Columbia. He then articled at a large regional business law firm in Vancouver, British Columbia, from 1993 to 1994, and has been a member of the Law Society of British Columbia since September 1994. Varshney is also director of TSX-listed Mountain Province Diamonds Inc. and TSXV-listed Canada Zinc Metals Corp. and Margaret Lake Diamonds Inc.

Greg Florence has over 37 years of business experience including upstream oil and gas, green technologies, industrial supplies and agribusiness. In addition to over 12 years as a CFO, he has held a number of senior management positions including Corporate Secretary, Director Investments and Vice President Marketing and Corporate Development. His expertise includes finance and accounting, budgeting and forecasting, regulatory compliance, corporate finance, portfolio investment and management and corporate governance. Florence has sat as a director of public companies, private companies and not-for-profits. He is a member of the Chartered Professional Accountants of Alberta.

The information contained here is for information purposes only and is not to be construed as an offer or solicitation for the sale or purchase of securities. Readers should conduct their own research for all information publicly available concerning the company. Prior to making any investment decision, it is recommended that readers consult directly with E3 Metals Corp. and seek advice from a qualified investment advisor.