This Bald Eagle Gold profile is part of a paid investor education campaign.*

It can be difficult finding a viable asset to develop for emerging mining and exploration companies. Luckily, the right management team operating in the right jurisdiction can push even junior players into the big leagues.

One of the US' most prolific mining districts is Nevada. According to the Fraser Institute, the state ranks as one of the top mining jurisdictions in the world. Nevada hosts the perfect mix of existing infrastructure, a skilled local workforce and favorable warm weather year-round, which presents emerging mining companies with exceptional discovery potential and economic prospects.

The company's management team and board have a successful track record of growing companies through formation, listing, development and exit. Collectively, the team has raised over US$405 million in capital with companies such as UNX Energy (TSX:UNX), IC Potash (TSX:ICP), Namaste Technologies (TSXV:N) and Khiron Life Sciences (TSXV:KHRN).

Bald Eagle Gold has generated a high-quality pipeline through long-standing relationships with local operators, key decision-makers and market participants. These connections help Bald Eagle advance its objective to acquire, expand and enhance its asset's resources to reserves over the early stages of its current commodity cycle.

The Hot Springs property is a historically explored property with a significant source of gold mineralization first discovered in the 1890s. The property hosts two main targets: the Dutch Flats shear zone and the mid-Paleozoic calcareous and limestone zones. 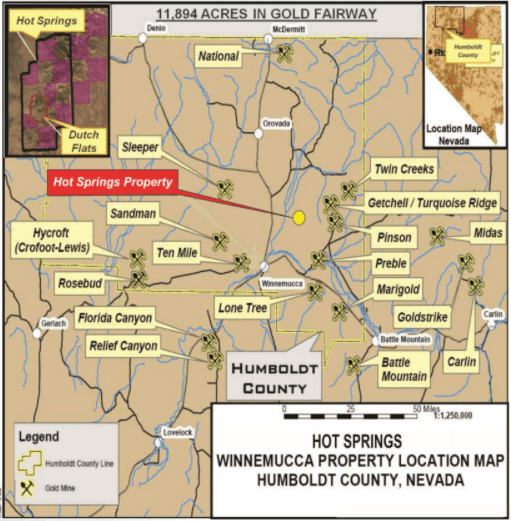 The project's exploration history for the project is primarily shallow drilling and surface sampling, with the discovery of quartz-gold nuggets at surface. Bald Eagle theorizes that much of the high-grade gold discovery lies deeper into the property. The company is excited to explore its multiple drill targets across the property. The Battle Mountain and Getchell-Comstock gold trends intersect through the district and host world-class epithermal and Carlin-type deposits. Eighteen mines have been discovered across the district — including mines ones from well known companies such as Hecla (NYSE:HL), Newmont (NYSE:NEM,TSX:NGT) and Barrick Gold (NYSE:GOLD,TSX:ABX) — and considerable exploration and development potential remains.

The company's goal is to expand its portfolio of high-grade mineral assets through organic exploration and development. Immediate plans for the Hot Springs property involve developing new geologic models to test the property and continuing drilling to uncover the property's discovery possibilities at depth.

In 2021, Bald Eagle received TSX Venture Exchange and other regulatory approval for the acquisition of a 100 percent interest in the Hercules Silver Property located in Washington County, Idaho. The Hercules Property is a significant brownfield land package of nine square kilometers within the underexplored Cuddy Mountain Mining. Its silver-rich terrane has been prospected for silver occurrences since the late 19 th century, with six historically identified silver-mineralized zones. Hercules Silver has historic drill intercepts including hole 80-13 with 10.7 meters of 825 grams/tonne (“g/t") silver, hole PH 42 with 29.3 meters of 259 g/t silver and hole PH 33 with 14.6 meters of 562 g/t.

The Hot Springs property spans 11,894 acres and is strategically located at the intersections of Getchell-Comstock and Battle Mountain, which is part of gold trends found in the prolific Arkosic Triangle in Nevada. The trend hosts well-known gold mines as well as Carlin-type and epithermal gold deposits.

Historical exploration of the property confirms multiple occurrences of gold, both at surface and depth, uncovered through surface sampling and drilling. Drilling campaigns from 2007 returned mineralization estimates of 16 million tonnes at 0.18 g/t grade for 91,750 ounces of gold. Recent exploration indicates exceptional grades above 1 ounce per tonne gold at surface and quartz-gold nuggets at surface, indicating a source within two miles. 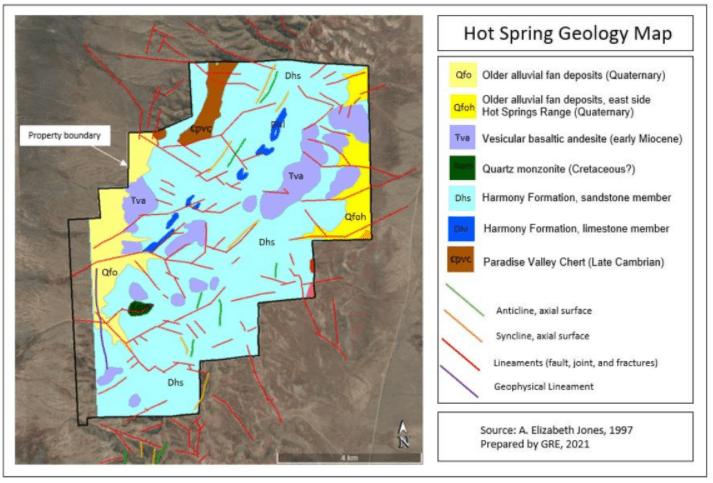 Mid-paleozoic limestone and calcareous sediments indicate the high probability of Carlin-type deposits, similar to the nearby Turquoise Ridge mine and neighboring mines from companies including Hecla, Newmont and Barrick.

In 2020, the company completed deep structural geophysics and a drilling campaign over the property. The next steps for the project include a proposed US$1.8 million drilling campaign that would involve up to 5,000 meters of drilling, IP and CSAMT and claims staking, for which Bald Eagle has expressed excitement.

Mr. Harari is the founder of Canalis Capital, a merchant bank focused on disruptive industries. Prior to founding Canalis Capital, Mr. Harari worked at Credicorp Bank in its private wealth group in Panama and Nomura's consumer and retail investment banking group based in New York City . Mr. Harari graduated with honors from the University of Pennsylvania with a Bachelor of Science in systems engineering and a minor in engineering entrepreneurship and mathematics. Mr. Harari is an active angel investor across the mining, technology, fashion, cannabis, e-commerce, and energy sectors. Mr. Harari also serves as CEO of IM Exploration (CSE:IM) and CEO of Momentous Capital Corp. (TSXV:MCC.P), a Capital Pool Company which is in the process of completing its qualifying transaction. Mr. Harari also served as the deputy director of the Chamber of Commerce, Industry and Agriculture of Panama.

Mark Smethurst is a professional geologist with over 25 years of experience. He has held previous executive appointments as VP and COO of Resource Development for public companies and is currently a Qualified Person defined by National Instrument 43-101.

Ms. Lane is a Mining Engineer with more than 35 years of experience. Her experience includes feasibility studies, mine and process engineering and project development for surface and underground mines. She has managed projects in the US, Canada, Mexico, Ireland, Russia, China, Bolivia, Peru and Africa.

Mr. Samari is a geologist with more than 30 years of experience. He has experience in structural geology, mining geology, economic geology, and seismic assessment. His project experience spans multiple jurisdictions and includes exploration and resource definition for gold, silver, copper and other metals

Mr. Feinstein holds a Ph.D. in Geological Sciences and an M.Sc. in Economic Geology from the University of Texas El Paso, as well as a B.Sc. in Geology and Geography from Sam Houston State University. He is president of Mineoro Explorations, leading exploration and development of mineral properties in the US, Mexico and Canada.

Nicholas Tintor, a geologist, and mining executive will be an active Executive Director of the Company. He has more than 35 years of experience in the Canadian mining industry and has been involved in all aspects of the junior mining sector including executive management, project generation, corporate finance, and investor relations.

He holds a B.Sc., Geology from the University of Toronto and is a Qualified Professional Member of the Mining and Metallurgical Society of America and a Qualified Person as defined by NI 43-101. He is also a lifetime member of the Prospectors & Developers Association of Canada , and a member of PDAC's Securities Committee.

Michael Bandrowski, an executive and former research analyst, will be an Independent Director of the Company. For the past 16 years, he has been active in the mineral exploration and development industry as a mining research analyst and mineral exploration and development corporate executive. He holds a B.Sc. in geology and an MBA and has previously served on numerous public and private company boards. He is currently President and Chief Executive Officer of Big Ridge Gold Corp., a company which is acquiring an 80 per cent interest in Hope Brook Gold Project of Newfoundland and Labrador , an advanced stage, high-grade gold project. He was Founder of Escarpment Capital Advisors, a premier Canadian mining advisory firm. Over a nine-year period, he was a mining Research Analyst at Beacon Securities Inc., a mining Research Analyst at Clarus Securities Inc., and a Research Associate at Paradigm Capital.

Dr. Laurence Curtis is an economic geologist with over 45 years of experience in exploration, mine development, and financing of precious metals resources . He holds a Ph.D. from the University of Toronto and is a licensed Professional Geologist ( Ontario ) and a Lifetime Member of the PDAC.

Dr. Curtis is currently a director of Excellon Resources Inc. and formerly a Director of Wheaton River Minerals, High River Gold and Breakwater Resources. In 1996 he founded Intrepid Minerals Corporation as a mineral exploration and development company and was with the company through to 2014. During that period, he operated as Chief Executive Officer and Chief Operating Officer. Under his tenure, the company advanced projects in Argentina , Central America , and Western Australia . During the transition to Intrepid Mines Ltd., he effected substantial financings and negotiated significant joint ventures with major international mining companies.

Jean Depatie has had a distinguished career in the mining industry in Canada and internationally for the past 45 years. He is an internationally recognized expert in mineral exploration and development and minerals and mining corporate finance including financing and mergers and acquisitions. Mr. Depatie is a graduate of the University of Montréal where he obtained a B.A in Mathematics and Physics and a B.Sc. in Geology. He received an M.Sc. from Laval University in Québec City. He was a Director of Glamis Gold (which was sold to Goldcorp creating a $21.3 billion company), a Director of Novicourt Inc. (which was acquired by Xtrata), and a Director of Consolidated Thomson Iron Mines (acquired by Cliff Resources in a $4.9 billion acquisition transaction). Mr. Depatie has served many public companies at the highest levels. As President and CEO of Louvem Mines he was instrumental in the discovery of the Louvicourt base metal mine and the development of the Beaufor gold mine in Quebec. As a Director of Gold Hawk Resources, he was involved in the acquisition and reactivation of the Cobre San Juan base metal mine located in San Mateo, Peru.

The information contained here is for information purposes only and is not to be construed as an offer or solicitation for the sale or purchase of securities. Readers should conduct their own research for all information publicly available concerning the company. Prior to making any investment decision, it is recommended that readers consult directly with Bald Eagle Gold and seek advice from a qualified investment advisor.

The information contained here is for information purposes only and is not to be construed as an offer or solicitation for the sale or purchase of securities. Readers should conduct their own research for all information publicly available concerning the company. Prior to making any investment decision, it is recommended that readers consult directly with Bald Eagle Gold and seek advice from a qualified investment advisor.