Anfield Resources Inc. (TSXV:ARY,OTCQB:ANLDF) is an energy metals exploration, development and near-term production company focused on becoming a top-tier uranium company in the United States. Anfield Resources recently completed the acquisition of Uranium One’s (TSX:UUU) US uranium assets covering 48,000 acres including the Shootaring Canyon Mill in Utah. One of only three licensed uranium mills in the US, the Shootaring Canyon Mill is now the key asset in Anfield Resources’ portfolio along with the past-producing Velvet-Wood Project.

Through the Uranium One transaction, Anfield now holds an impressive portfolio of uranium assets—including the Frank M Uranium Project and the Findlay Tank breccia — two surface stockpiles totaling 415,000 pounds U3O8, and a number of royalty arrangements on projects held by other publicly-traded companies.

“All our uranium assets are located in the US, one of the world’s lowest-risk and most favourable uranium jurisdictions, and host of the world’s largest uranium requirements,” commented Corey Dias, CEO of Anfield Resource. “The assets are synergistic and provide a strategic, stepped approach to production and revenue generation.  Our acquisition has fortuitous timing as our carefully-selected US projects are positioned to benefit from renewed US interest in clean nuclear energy and domestic uranium producers, and the strengthening global uranium market.”

The Shootaring Canyon Mill is strategically located in Garfield County, Utah, within one of the most historically prolific uranium production areas in the United States. Shootaring Canyon is one of only three licensed, permitted and constructed conventional uranium mills in the country. The mill is a conventional acid-leach facility permitted to process up to 750 tonnes of ore per day, with a capacity to process up to 1,000 tonnes per day. 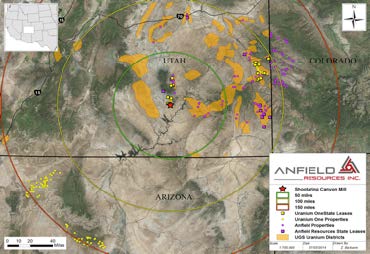 Historical production at the Shootaring Canyon Mill included 27,825 pounds of U3O8 with metallurgical recoveries of more than 90 percent. The mill is in good condition and Anfield Resources expects it can be refurbished relatively quickly and at low cost when compared to building a brand new facility.

One of the two surface stockpiles acquired by Anfield Resources through the Uranium One transaction is located within a mile of the mill. The Shootaring Canyon stockpile contains a historical estimate of 250,000 pounds of U3O8 at an average grade of 0.13 percent U3O8. Anfield Resources intends to conduct a sampling program and survey to upgrade the historical estimates to a current resource.

All of Anfield’s uranium mining assets, including those acquired by Anfield Resources under the Uranium One transaction, are located within a 150 mile radius of the Shootaring Canyon Mill.

The information contained here is for information purposes only and is not to be construed as an offer or solicitation for the sale or purchase of securities. Readers should conduct their own research for all information publicly available concerning the company. Prior to making any investment decision, it is recommended that readers consult directly with Anfield Resources and seek advice from a qualified investment advisor.