This ALX Resources Corp. profile is part of a paid investor education campaign.*

ALX Resources Corp. (TSXV:AL,FWB:6LLN,OTC:ALXEF) is dedicated to providing shareholders with multiple opportunities for discovery by exploring a portfolio of prospective mineral properties, which include gold, nickel–copper–cobalt and uranium. Using the latest technologies, ALX plans and executes well-designed exploration programs and holds over 200,000 hectares of prospective properties in Saskatchewan and Ontario, Canada. Aiming for international expansion, ALX Resources also has properties in Norway with its Draco VMS project.

The Vixen North property lies within the Birch-Uchi greenstone belt, a geological trend located to the northeast of Red Lake. This area hosts numerous historical gold mines and is highly prospective for new showings of gold mineralization. In 2019 and 2020, high-resolution airborne magnetic surveying and site visits were conducted, which  confirmed prospective geology and surface gold mineralization.

ALX Resources has demonstrated that key partnerships can increase the potential for success in the company’s primary projects. The company owns a 100 percent interest in the Firebird nickel project, which is now under option to Rio Tinto Exploration Canada Inc. Through an agreement announced in August 2020, Rio Tinto Exploration Canada can earn up to an 80 percent interest in the Firebird nickel project by carrying out C$12 million in exploration expenditures and making cash payments of $125,000 to ALX Resources.

The Hook-Carter property measures 24,262 hectares over 82 claims in the southwest part of the Athabasca Basin. Located in the prolific Patterson Lake Corridor, this region hosts new and expanding uranium discoveries, including the Triple R Deposit, Arrow Deposit and the Spitfire Zone. Drilling by Denison in 2018-2019 totaling 11,757 metres in fifteen completed drill holes exhibited the hallmarks of a widespread, intense alteration system.

Along with ALX Resources’ rich portfolio of diverse assets in world-renowned jurisdictions, identifying undervalued and underexplored assets is the company’s strong suit. As early adopters of new methods of exploration, the company embodies innovation with its willingness to utilize new geochemical and geophysical technologies. This includes the use of artificial intelligence recognition methods and other emerging science-focused exploration tools.

ALX Resources has a world-class management team with shareholders who have diverse expertise in mineral and gold exploration. The board of directors and officers of the company currently hold 8.54 million shares representing 5.67 percent of ALX’s issued and outstanding common shares. Holystone Energy Company, a private investment company, owns 25.59 million shares for a 16.98 percent interest. Dundee Corp. (TSX:DCA) and Orano Canada own 11.72 percent and 2.65 percent interests, respectively. 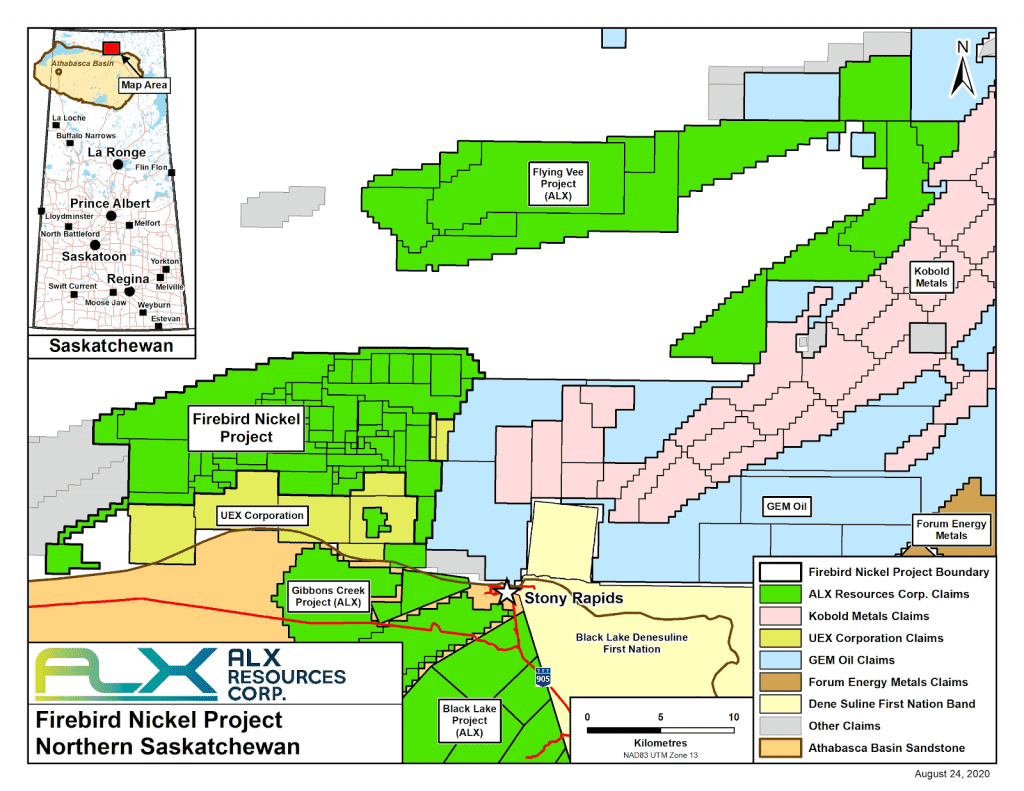 Saskatchewan presents a rich mineral endowment with the presence of uranium, gold, base metals and diamonds. For example, over 1.6 million ounces of gold have been produced at the Seabee gold mine, which has been operating since 1991. Saskatchewan hosts the richest uranium mines in the world and was ranked in the world’s Top Ten mining jurisdictions in a 2019 survey conducted by the Fraser Institute.

Strategically positioned, Firebird is located near advantageous infrastructure, including an all-weather road and airport, which are both within 10 kilometers of the property. Its close proximity to the town of Stony Rapids, SK, and access to hydroelectric power offers increased efficiencies for exploration.

During the Firebird winter drilling program in 2020, three holes were drilled totaling 600 meters. Nickel-copper mineralization was intersected in two of the three holes, which are promising results for the expansion of this project. 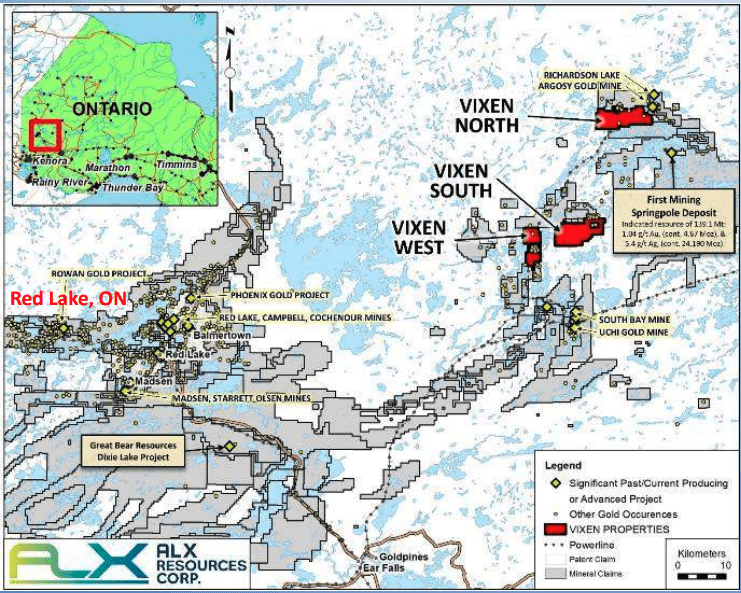 The 100 percent owned Vixen gold project is located in the Red Lake Mining District of Ontario and consists of three sub-projects totaling 10,069 hectares staked within the Birch-Uchi greenstone belt, approximately 60 kilometers east of the town of Red Lake, Ontario. The jurisdiction is favourable for exploration, with winter access to Vixen North and a series of roads leading directly to the Vixen South property.

Using the latest imaging technology, ALX carried out a high-resolution airborne magnetic and VLF-EM survey that has collected preliminary data defining an approximate 3,000 meter-long high magnetic trend in conjunction with the newly-identified Vulpin Zone. Additional samples were collected in October 2020 along the iron formation associated with gold mineralization that was mapped in August 2020. ALX’s 2020 rock sampling at the Vulpin Zone showed values of up to 8.41 g/t gold.

Other prospecting targets at Vixen include detailed follow-up of gold mineralization found within a fluorite occurrence southeast of the Vulpin Zone that may represent a genetic phase of porphyry-hosted gold deposition. Recent sampling at the Dickenson Zone located rock samples ranging up to 17.7 g/t gold. 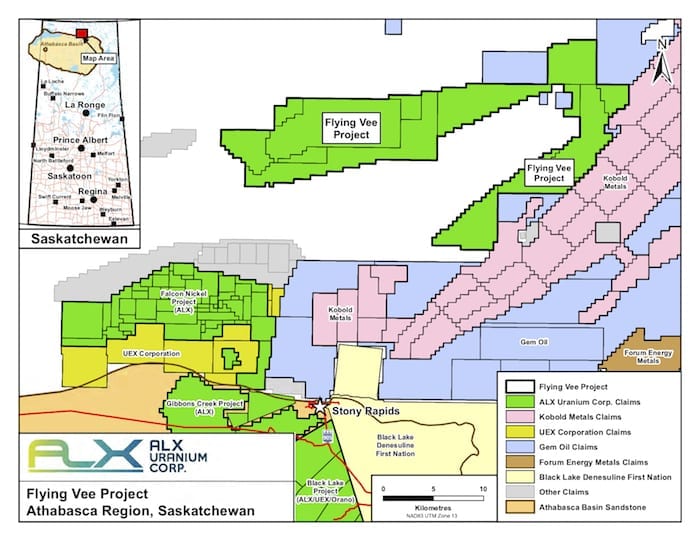 Like the Firebird nickel project, the Flying Vee nickel project in Saskatchewan is highly-prospective for nickel-copper-cobalt, and hosts a gold showing. Flying Vee is located north of Stony Rapids in an underexplored district with high potential for discovery. With neighboring projects held by companies like Kobold Metals and UEX Corporation, a staking rush occurred in the Spring of 2019. In July 2020, ALX was the first company since 1988 to prospect the Day Lake gold showing at Flying Vee, and samples up to 8.34 g/t gold were found.

Warren Stanyer has over 24 years of experience in the mineral exploration industry, focused mostly on uranium in the Athabasca Basin. Stanyer began his career with Pioneer Metals, a diverse explorer for gold, base metals and uranium, with properties in New Mexico, British Columbia, Manitoba and Saskatchewan. In 1999, Pioneer signed an option agreement with Cameco Corporation, which led to the formation of UEX Corporation in 2002. Stanyer held the positions of Corporate Secretary and Vice President of Corporate Development in both Pioneer and UEX, prior to the acquisition of Pioneer by Barrick Gold Corporation in 2006.

In 2008, Mr.  Stanyer accepted the role of President and CEO of Northern Continental Resources, a junior exploration company focused on uranium in the Athabasca Basin. He steered the successful sale of the company in 2009 to Hathor Exploration Limited, in competition with Denison Mines.

He became Chairman of Guyana Frontier Mining Corp. in December 2010 and was President and CEO from September 2011 to December 2012. As a Director of Alpha Minerals Inc., a predecessor company of ALX, and following the Patterson Lake uranium discovery in 2012, he served as Chairman of the Special Committee in 2013 during the acquisition of the company by Fission Uranium Corp. and subsequently served as a Director of Fission until 2014. Currently, Mr. Stanyer serves as President, CEO and a Director of Nevada Sunrise Gold Corporation, a junior exploration company focused on gold, copper, cobalt and lithium in Nevada, USA. He is also a Director of New Moon Minerals Corporation, a private mineral exploration company.

Sierd Eriks has worked in mineral exploration for over 35 years with a focus on uranium exploration for the past two decades. From 1979 to 1998, he gained geological and managerial experience with major mining companies, including Saskatchewan Mining and Development Corporation (now Cameco Corporation), Falconbridge Limited, Noranda Exploration Co. Ltd. and Cogema Resources Inc. (now Orano Canada) in base metals, gold, platinum group metals and uranium exploration.

In 1999, he became a consulting geologist and worked on numerous uranium exploration programs in the Athabasca Basin. Prior to joining ALX, he was Vice-President of Exploration with UEX Corporation from 2007 to 2014. In this position, Eriks managed projects with annual exploration budgets of up to $29 million and directed drilling programs leading to the establishment of mineral resources for three uranium deposits in the eastern Athabasca Basin in Northern Saskatchewan.

Ms. Boddy is a member of the Canadian Society of Corporate Secretaries and has acted as Corporate Secretary for a number of public companies in recent years, including Levon Resources Ltd. (TSX:LVN), Nevada Sunrise Gold Corporation (TSXV:NEV), Aton Resources Inc. (TSXV:AAN), and Resinco Capital Partners Inc. (TSXV:RIN). Ms.Boddy acts as a consultant to public and private companies through Rhodanthe Corporate Services, a B.C.-based private company.

*Disclaimer: This profile is sponsored by ALX Resources (TSXV:AL). This profile provides information which was sourced by the Investing News Network (INN) and approved by [Company Name] in order to help investors learn more about the company. [Company Name] is a client of INN. The company’s campaign fees pay for INN to create and update this profile.

The information contained here is for information purposes only and is not to be construed as an offer or solicitation for the sale or purchase of securities. Readers should conduct their own research for all information publicly available concerning the company. Prior to making any investment decision, it is recommended that readers consult directly with [Company Name] and seek advice from a qualified investment advisor.