Key Projects in the Epicenter of US Lithium Development, Nevada’s Clayton Valley

This ACME Lithium profile is part of a paid investor education campaign.*

The large-scale shift to carbon-pollution-free electricity and net-zero emissions is already underway. According to analysts and industry executives, “the pandemic has proved to be a reset point for the market.” With the worldwide lithium battery market expected to grow exponentially in the coming decade — which has the potential to reach a record value of US$80 billion by 2026 — it’s clear there is significant potential and a lot of growth to come.

“And when you come into this growth period where year-on-year the volumes are getting significantly bigger in terms of orders from the battery industry, I think that has the potential to create a real bottleneck in terms of keeping supply up with demand,” said Andrew Miller, product director at Benchmark Mineral Intelligence in an interview with INN.

Add to that the passing of the Paris Agreement in 2016 and the Biden Administration’s energy and infrastructure plans, and it points to an increased focus on combating the climate crisis in governments around the world. Even the US Department of Energy (DOE) revealed it believes the solution requires establishing a domestic supply chain for lithium-based batteries.

But with limited production capacity available in the United States, more production will be required to facilitate the growing needs of the electric vehicle and stationary grid storage markets. It’s this perfect storm of conditions that have led Clayton Valley in Esmeralda County, Nevada to become a hotspot for lithium exploration and development in the US. This region uniquely hosts the only US-based lithium mine.

ACME Lithium (CSE:ACME,OTC:ACLHF) is a junior mineral exploration and development company focused on acquiring and developing a portfolio of exploration-stage, lithium-containing projects in Nevada. The company’s management team is highly experienced with a strong history of success in building and financing resource companies around the world including the development of lithium-based projects.

ACME Lithium currently operates its Clayton Valley and Fish Lake Valley projects in the mining-friendly Esmeralda County area in Nevada. The properties are strategically located near Albemarle Corporation’s Silver Peak Lithium mine. The Silver Peak lithium mine has continuously produced lithium since 1966, with concentrations as high as +1,000 ppm of lithium. 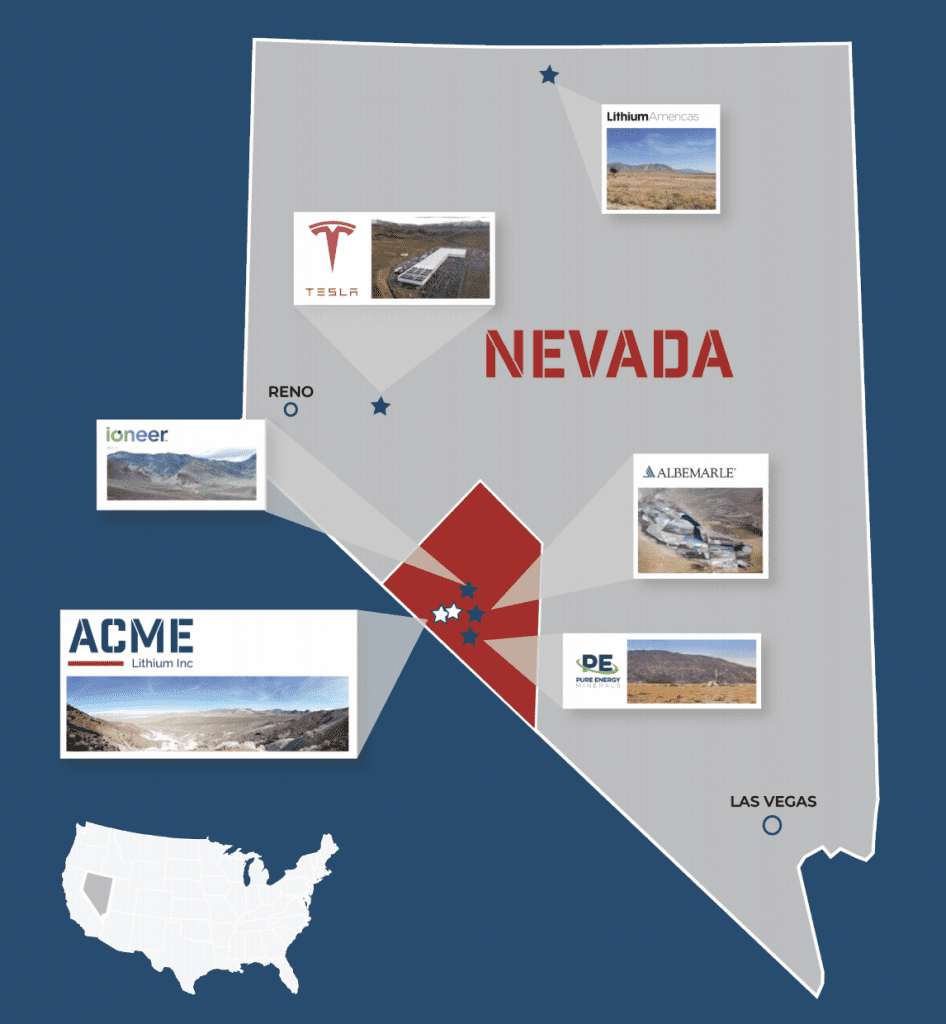 ACME Lithium’s projects are also located in an area with a developing battery supply chain, including Tesla’s Gigafactory, which sits only 200 miles away. Both of ACME Lithium’s properties have year-round access to expertise, infrastructure, rail and roads, power and water, including favorable weather conditions and logistics.

“We have been working on our exploration plan over the last few months in preparation for what’s going to be a busy summer. We actually have geological targets that are ready to drill test. We’re going to do some additional mapping and sampling of both the Fish Lake Valley project as well as geophysical analysis of our project in Clayton Valley and we hope to drill before year-end on both projects assuming we get the results we’re looking for from the preliminary work. We also continue to look at accretive projects around the globe,” said ACME Lithium CEO Steve  Hanson.

The Clayton Valley property has the potential to host lithium brine just like the Silver Peak Lithium mine, while the Fish Lake Valley property has been confirmed to host the same geological processes like those found at the Albemarle mine in Clayton Valley. The presence of lithium brine would provide ACME Lithium with a strong competitive advantage against other companies that typically go after clays or hard rocks. Clay and hard rocks are more difficult to process and create a concentrator product that can be used by technology companies in battery production. The company strongly believes that its properties have the potential to produce lithium under simple metallurgical conditions based on preliminary indications. 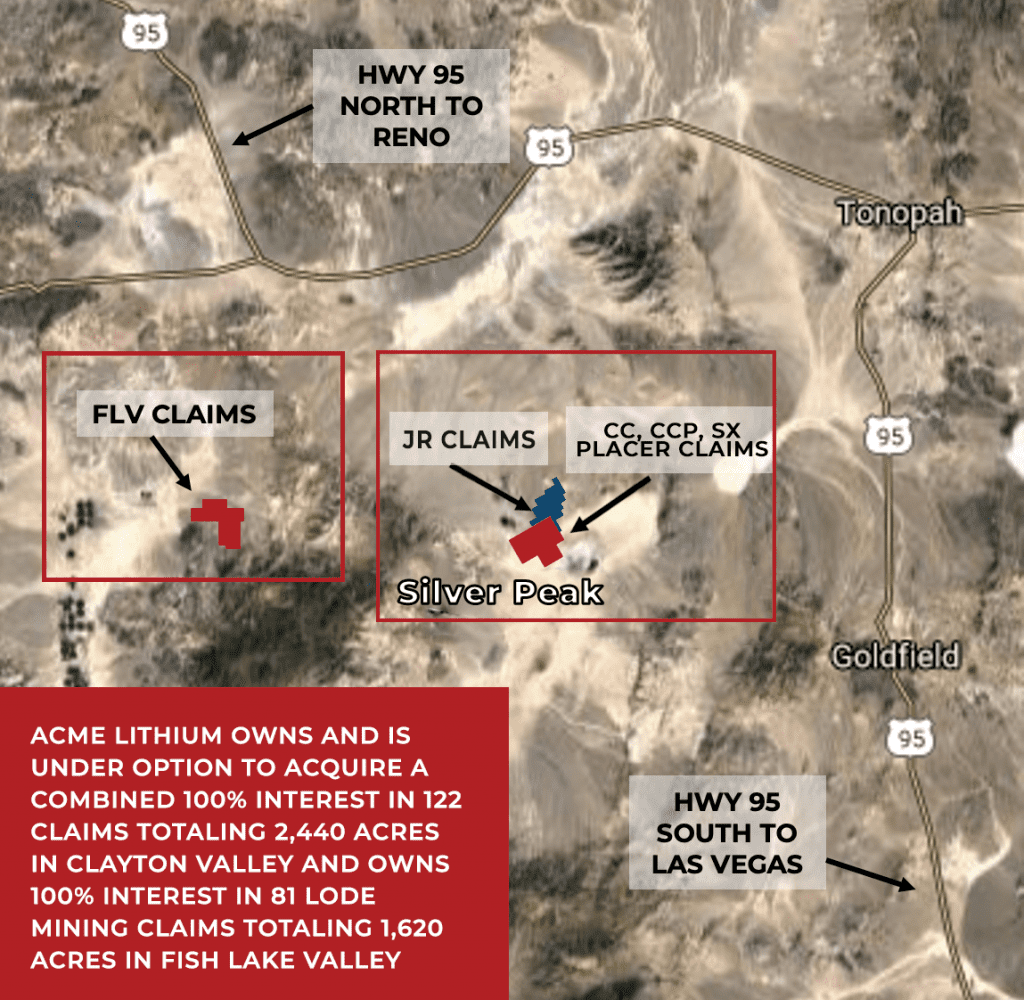 In July 2021, the company closed its second and final tranche of oversubscribed non-brokered private placement financing of units at C$2,378,650 at a price of C$0.40 per unit for total gross proceeds of C$3,609,666.80. The company intends to use the proceeds to partly fund exploration on its lithium projects in Nevada for 2021 and general working capital. ACME Lithium is capitalized and aiming to acquire and develop additional projects in the lithium sector and growing electric vehicle sector for 2021 and 2022 to increase shareholder value.

The company’s leadership team has decades of experience in the mining, energy and finance sectors. ACME Lithium also boasts multiple notable industry figures, including Yiannis Tsitos, who has worked for the BHP Billiton group, William Feyerabend, who has direct experience in developing lithium projects and Steve Hanson, who has been involved in multiple successful M&A transactions in the mining and resource sector, including exit strategies with major corporations. 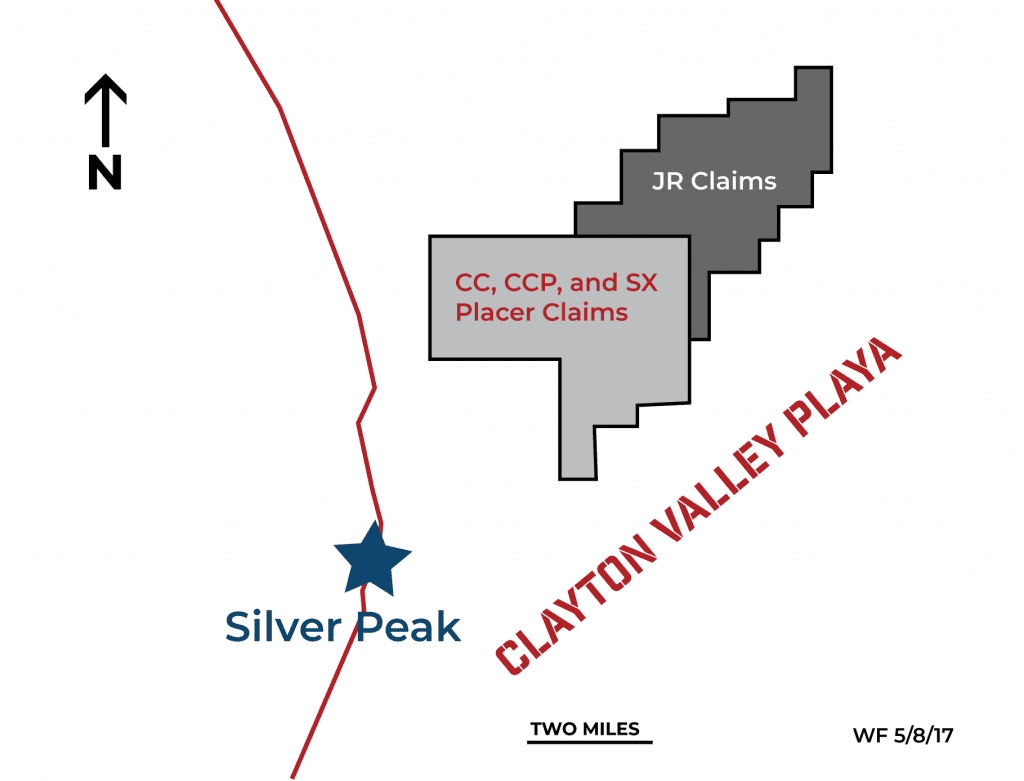 The Clayton Valley project is located 190 miles northwest of the city of Las Vegas in Esmeralda County in Nevada. The property spans 2,440 acres with year-round access to expertise, infrastructure, rail and roads, power and water including favorable weather conditions and logistics. Clayton Valley is located directly to the south of Albemarle Corporation’s Silver Peaks lithium mine that has produced lithium minerals from brines continuously since 1966 including samples as high as 228 ppm lithium. Concentrations up to +1,000 ppm have also been found to occur within specific horizons of fine sediments.

ACME Lithium’s claims on the Clayton Valley project cover basin-fill sediments and aquifers similar to the sediments currently producing brines in the region based on historic drill information and geophysical survey results. There is also promising evidence that the extensive valley growth faults provide an adequate plumbing system to foster brine reservoir accumulation for moving fluids around.

ACME Lithium owns and is under the option to acquire a combined 100% interest in 122 claims including the CC, CCP, JR, and SX Placer claims on the Clayton Valley property. Moving forward, the company plans to continue interpreting geophysical survey data and results as well as develop its drill targets to test indicated and prospective aquifers. The company believes it has the potential to host lithium brines sourced from lithium Tertiary clays accumulated in a basin environment similar to the Silver Peak lithium mine.

The Fish Lake Valley project is located in Esmeralda County in Nevada. The project spans 1,620 acres with year-round access to expertise, infrastructure, rail and roads, power and water including favorable weather conditions and logistics. Fish Lake Valley is located 24 miles northwest of Albemarle Corporation’s Silver Peak’s lithium mine that has produced lithium minerals from brines continuously since 1966. Concentrations up to +1,000 ppm have been found to occur within specific horizons of fine sediments and the Silver Peak mine includes samples as high as 228 ppm.

Exploration at Fish Lake Valley since 2010 has revealed sites with anomalous lithium values greater than 100 ppm in Tertiary claystone, sediment samples with values approaching 600 ppm lithium in claystone, positive geophysical surveys and lithium within clay-rich horizons. In 2016, initial mapping and sampling completed by the previous operator found lithium values with potentially the same process as at Clayton Valley ranging from 5 to 40 ppm in mudstones. In 2018, the previous operator confirmed that it was, in fact, the same geological process resulting in high lithium values in fine sediments found at the Fish Lake Valley property.

ACME Lithium owns 100% interest in 81 lode mining claims on the property. The company is currently in the process of designing drill testing of lithium claystone to determine the economic potential. Beginning in the third quarter of 2021, the company plans to begin to identify new targets and expand exploration of the property through in-depth mapping, sampling, and geophysics tests.

Stephen Hanson has over 28 years of finance and corporate development experience across four continents. Hanson has held executive (CEO), board and advisor positions for numerous private and public companies in mining, alternative energy, oil and gas sectors. Hanson has been involved in a number of successful M&A transactions including exit strategies with major corporations.

Yannis Tsitos is originally a physicist-geophysicist with nearly 30 years of experience in the mining industry, including 19 years with BHP Billiton group which is one of the biggest mining companies in the world. Tsitos is currently the President of Goldsource Mines Inc., a TSXV-listed company, and sits on several boards as an independent director.

Vivian Katsuris is a specialist in corporate development, management, consulting, and corporate services. Katsuris has over 28 years of financial experience in the brokerage industry, the North American capital markets and public financings. Katsuris holds director and officer positions with several CSE- and TSXV-listed companies.

Zara Kanji is experienced in financial reporting compliance for junior listed companies, taxation, general accounting, financial reporting and value-added advisory services for individuals, private and public companies. Kanji is a member of the Chartered Professional Accountants of BC and Canada.

The information contained here is for information purposes only and is not to be construed as an offer or solicitation for the sale or purchase of securities. Readers should conduct their own research for all information publicly available concerning the company. Prior to making any investment decision, it is recommended that readers consult directly with ACME Lithium and seek advice from a qualified investment advisor.

The information contained here is for information purposes only and is not to be construed as an offer or solicitation for the sale or purchase of securities. Readers should conduct their own research for all information publicly available concerning the company. Prior to making any investment decision, it is recommended that readers consult directly with ACME Lithium and seek advice from a qualified investment advisor.