Grid Metals Corp. today provided an update on the continuing exploration program at its 100% owned East Bull Lake palladium property in Ontario. The Company is releasing new drilling results and is commencing additional drilling based on refinements to its exploration methodology. The Property covers approximately 85% of the palladium-bearing EBL Intrusion, located 80 km west of Sudbury, Ontario Highlights Since …

Grid Metals Corp. (the “Company”) (TSXV:GRDM) today provided an update on the continuing exploration program at its 100% owned East Bull Lake (“EBL”) palladium property (the “Property”) in Ontario. The Company is releasing new drilling results and is commencing additional drilling based on refinements to its exploration methodology. The Property covers approximately 85% of the palladium-bearing EBL Intrusion, located 80 km west of Sudbury, Ontario

Dr. Dave Peck, the Company’s Vice President of Exploration and Business Development, remarked “We continue to have strong encouragement in our drilling and surface sampling programs at East Bull Lake. New insights gained this year have led to a major refinement to our exploration methodology. We are particularly encouraged by the coincidence of prospective geological and geophysical features in the Parisien Lake target area and will be trialing our refined exploration methodology there in the weeks ahead.”

The four new drill holes completed on the Property since drilling resumed on September 4th include one follow-up hole on the Feeder Target in the Parisien Lake target area (EBL20-08) and three holes drilled in the North Margin Target area. A map showing the drill hole locations is attached as Figure 1. Results have now been received from EBL20-08, which was designed to further test the geophysical anomaly that was partially tested in holes EBL20-04 through EBL20-07, all of which encountered anomalous palladium mineralization in the basal units of the EBL intrusion (see Company news releases dated August 6th, 2020 and September 9th, 2020).

The Parisien Lake area has emerged as a priority exploration target along the south margin of the west lobe of the intrusion. This area extends for approximately 4 km in an east west direction and includes a potential feeder structure, the Parisien Lake deformation zone. The target area is covered by the Company’s 2020 magnetotelluric (MT) survey as well as previous airborne and ground electromagnetic and magnetic surveys and ground induced polarization (IP) surveys. A key observation for this target area is the strong coincidence of palladium mineralization, magnetic low anomalies, IP anomalies and MT anomalies. Recently, Grid’s field crew collected an additional ~100 surface samples in the area to follow up on its August sampling program, which delivered one sample with 7.67 g/t Pd, 1.41 g/t Pt and 0.20 g/t Au (sample A0287231, previously reported). Other historical samples in the area have returned significant bas metal and palladium values (see Table 2) including local pods of semi-massive sulfide within the PLDZ, which contain variable proportions of chalcopyrite, pyrrhotite, pyrite and pentlandite. These sulfide-rich occurrences could be evidence of sulfide trapping in this potential feeder structure.

In order to further evaluate this large target area Grid will shortly complete 3 widely spaced drilled holes at approximately 200m centres and incorporate downhole EM geophysics to look for sulfide accumulations between the holes within the prospective area inside and adjacent to the PLDZ. The location of these drill holes reflects the strong coincidence of low magnetic signatures, resistivity lows, favourable structures and anomalous base and precious metal grades.

Table 2. Selected analyses for historical and recent surface samples of sulfide-rich pods in the PLDZ.

A remarkable aspect of the known palladium mineralization in the EBL Intrusion is its lateral and down-dip extent. Near surface and outcropping palladium mineralization is present along the southern margin of the intrusion, including the connecting dyke-like constriction between the east and west lobes, for approximately 20 km. Although most of the historical drilling on the property has involved shallow holes testing the margins of the intrusion, a few deeper holes have been drilled into the central portions of both the east and west lobes. Most of these deeper holes intersected the same style of palladium mineralization in the same geological package that is present along the southern margin of the intrusion, suggesting that the near surface mineralization has significant down-dip continuity. As an example, historical drilling completed by Atomic Energy of Canada Ltd. in the 1980s included two holes (EBL-1 and EBL-4) in the central part of the west lobe. Both holes encountered anomalous Pd mineralization in the lower stratigraphy as documented in Ontario Geological Survey Open File Report 5923 (1995). Based on these historical records and recent interpretations of the geological and geophysical characteristics of the known palladium mineralization on the Property, the Company speculates that a semi-continuous stratabound zone of anomalous palladium grade is present across the base of the intrusion. The mineralized envelope appears to have been fed by a network of feeder structures, including a series of faults developed along the contact between strongly magnetic Archean granitic rocks to the south and the southern margin of the EBL Intrusion to the north (Figure 2). Importantly, these potential feeders are typically flanked by strong magnetic low anomalies that could represent an alteration footprint associated with the mineralization process within the basal sections of the stratigraphy. Other interpreted feeders include several northwest-striking vertical faults (e.g., Sable River structure; Figure 2).

The persistence of anomalous palladium grades at EBL is typical of a large mineralization event. This event was also responsible for similar, widespread palladium mineralization seen in other EBL suite intrusions including the nearby Agnew Intrusion, located ~5 km east of the Property, and in the eastern part of the River Valley Intrusion, located ~140 km east of the Property. Similar lateral and vertical grade continuity is observed in the Critical Zone of the Bushveld Complex, South Africa, which hosts the large PGE resources contained in the Merensky and UG2 reef deposits.

The Company owns the mineral rights for the exploration-stage Bannockburn nickel project in the Timmins District of northeastern Ontario and the more advanced Makwa-Mayville nickel-copper-PGE project in the Bird River region in southeastern Manitoba. The Company plans to initiate targeted corporate and exploration efforts on both projects. The Company has commissioned an NI 43-101 Technical Report on the Bannockburn property, which hosts several nickel-rich massive sulfide occurrences and a ~2 km long Mount Keith-type disseminated nickel sulfide target. This decision was motivated by the recent improvement in the long-term consensus price forecast for nickel that has been driven by an increasingly positive outlook for nickel demand related to an expected, significant expansion in the electric vehicle battery market.

Grid Metals applies best practice quality assurance and quality control (“QAQC”) protocols on all of its exploration programs. For the current drilling program, core is logged and sampled at a core facility located in the town of Massey, Ontario – approximately 30 km south of the property. NQ-size drill core samples are cut into halves using a diamond saw. Standard sample intervals of 1.00 metre length are used unless a major geological, structural or mineralization boundary is encountered. Samples are bagged and tagged and driven by Company consultants to ALS Laboratories’ sample preparation and analytical laboratory in Sudbury, Ontario. ALS analyzes each sample for Pd, Pt and Au using a lead collection fire assay on a 30 g pulp split and an ICP finish. Copper, Ni and Co are analyzed by ALS using a multi-acid digestion and an ICP finish. ALS also performs complete characterization whole-rock geochemical analyses on pulp rejects as directed by the Company, including the determination of major, minor and trace element abundances with research-grade accuracy and detection limits. The Company uses two PGE certified reference materials (“CRMs”) and one analytical blank purchased from Canadian Resource Laboratories to monitor analytical accuracy and check for cross contamination between samples. One of the CRMs or the blank are inserted every tenth sample within a given batch. The analytical results for the two CRMs and the blank for the sample batches reported here did not show any significant bias compared to the certified values and the results fell within the acceptable limits of variability.

Grid Metals Corp. is an exploration and development Company that has a diversified portfolio of projects in the nickel-copper-platinum group metal sectors. These commodities are vital to the emerging battery metals, energy storage and automotive sectors. All of Grid’s projects are located in secure North American mining jurisdictions. The Company is focused on timely advancement of its property portfolio through prudent exploration and development activities.

On Behalf of the Board of Grid Metals Corp. 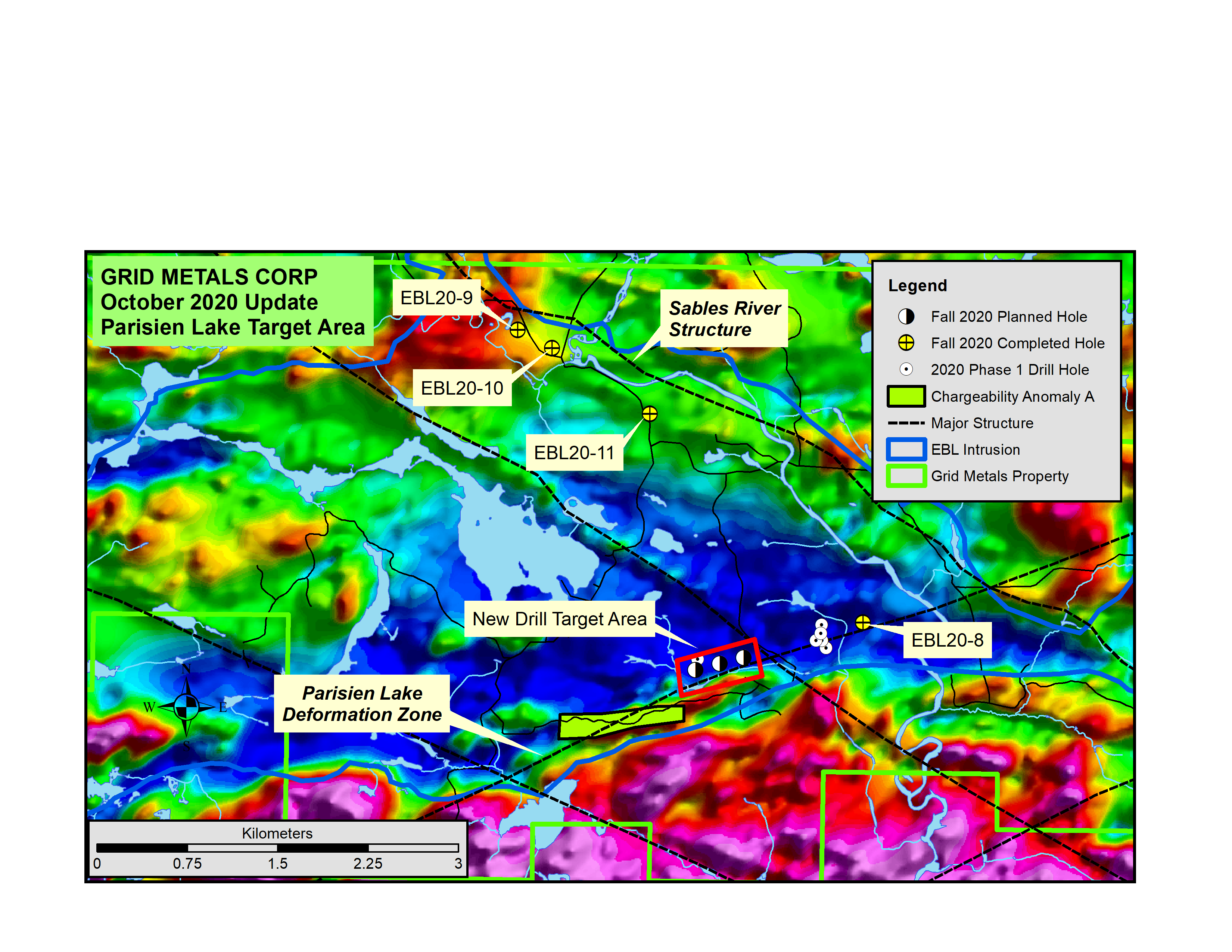 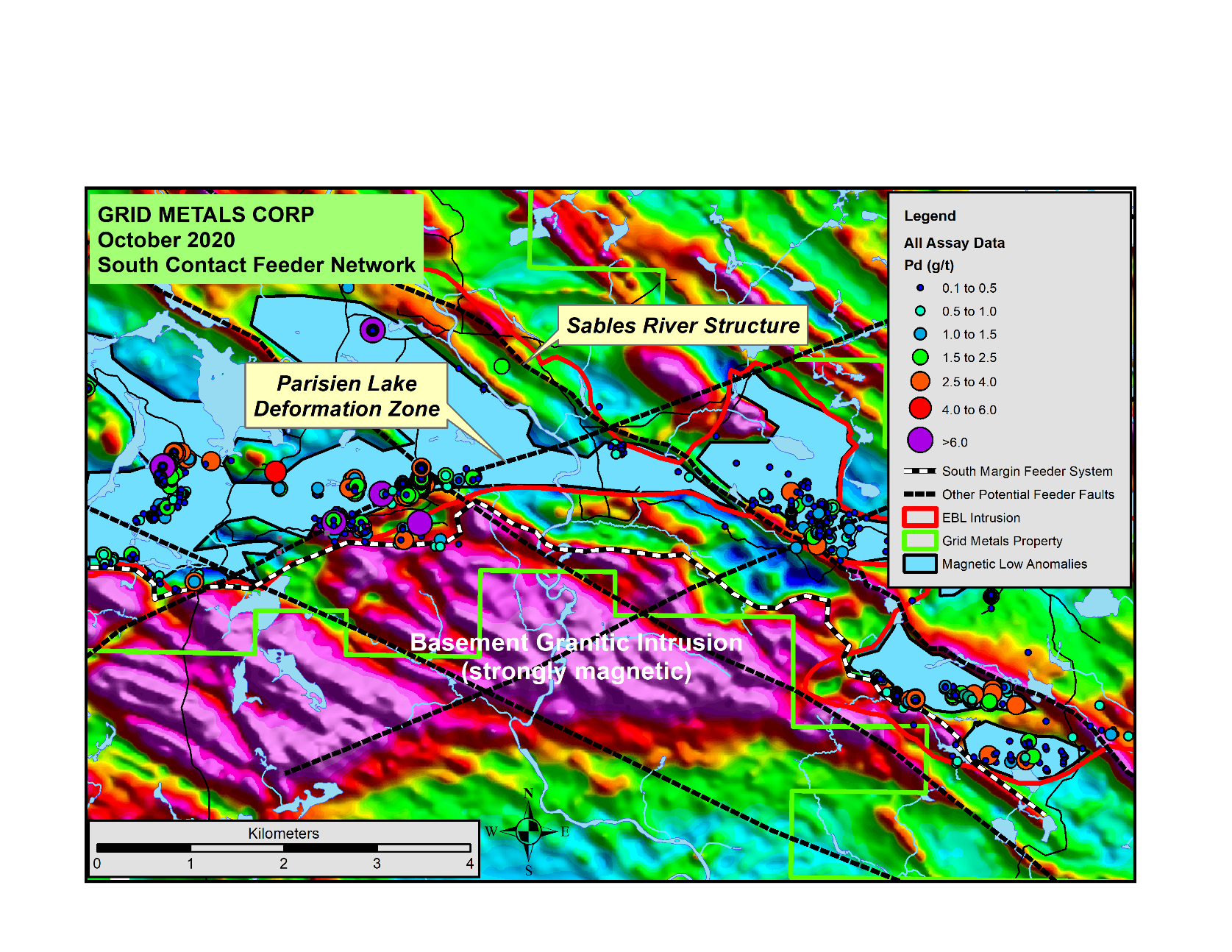