Chilean Metals Inc. has started on Phase 1 of drilling at its Tierra de Oro project in 3rd Region of Atacama about 75 km south of Copiapó, ChileThe 5,675 hectare project has several geological areas of interest the Company will be exploring following an Artificial Intelligence analysis generated by leading AI mining service provider Windfall Geotek .Previous exploration data generated by both the company and other …

Chilean Metals Inc. (“Chilean Metals,” “CMX” or the “Company”) (TSXV:CMX)(SSE:CMX)(MILA:CMX) has started on Phase 1 of drilling at its Tierra de Oro (Land of Gold) project in 3rd Region of Atacama about 75 km south of Copiapó, Chile

Previous exploration data generated by both the company and other historic operators have been compiled and 8,660 training points were subjected to evaluation by Windfall’s propriety CARDS AI model. CARDS uses data mining techniques to analyze compiled exploration data and to identify areas target zones with high statistical similarity to known “signatures” of areas of copper, gold and silver mineralization (Figures 3 and 4 below). A total of thirteen (13) prospective target zones were identified by the prediction analysis, of which the company has elected to drill test two of the zones. 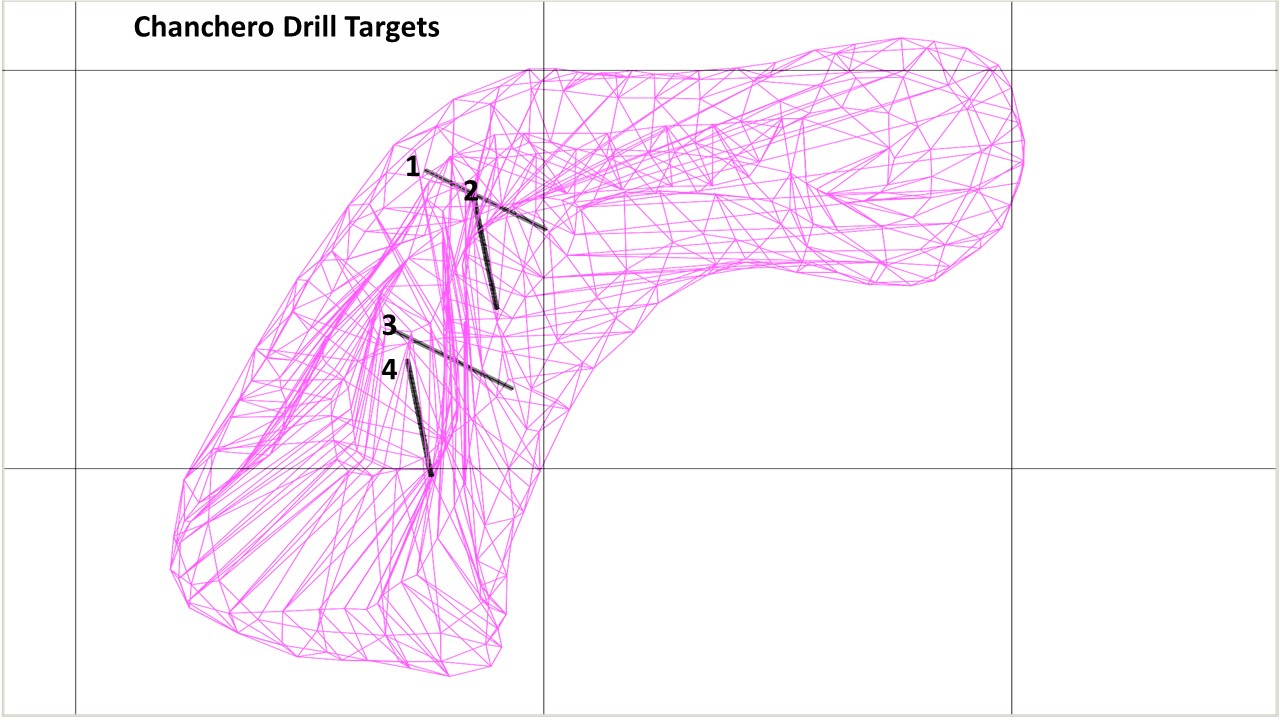 Figure 1: Locations of 4 Proposed drill holes at the Chanchero target, relative to the outline/projected shape of the greater at than 50MV/V chargeability anomaly as defined by the 2008 3-D Induced Polarization survey.

The Phase 1 program is to consist of 1,500 metres of core drilling is expected to be completed by mid December (2020) and assays are expected to be received in mid to late January (2021).

In addition to the drilling program, the Company intends to complete systematic sampling program over the remaining target areas identified by the AI analysis. Limited ground truth sampling on three (3) of the AI targets produced sample results including 10.32 and 5.79 grams per tonnes gold at the ‘Cobalt’ zone, and another series of nine (9) samples that graded between 0.77% to 3.23% Copper. In addition to wider surface sampling in areas where no surface indications are visible the company plans to conduct localized IP.

Phase 2 of the TDO drill program is expected to occur in early February and will include 4-6 drill holes and any follow up drilling established by results of Phase 1. 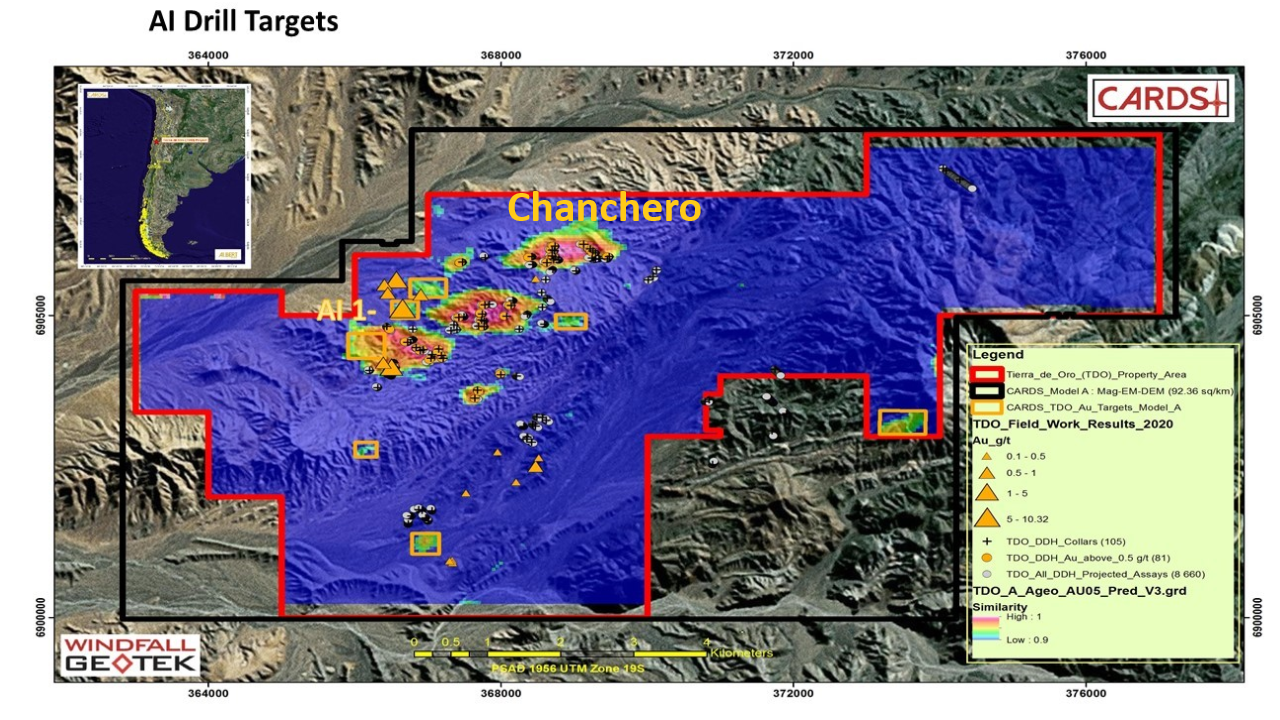 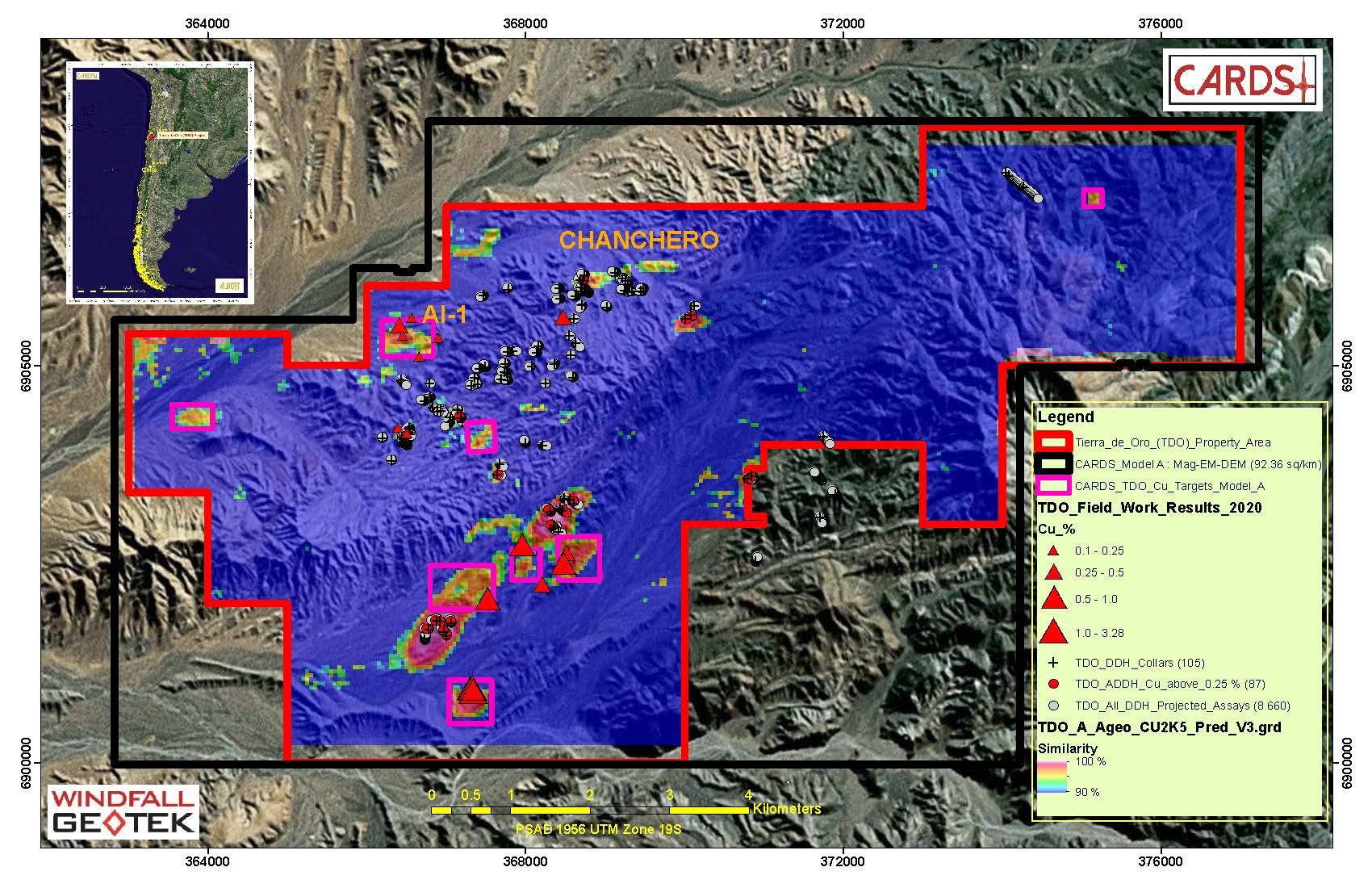 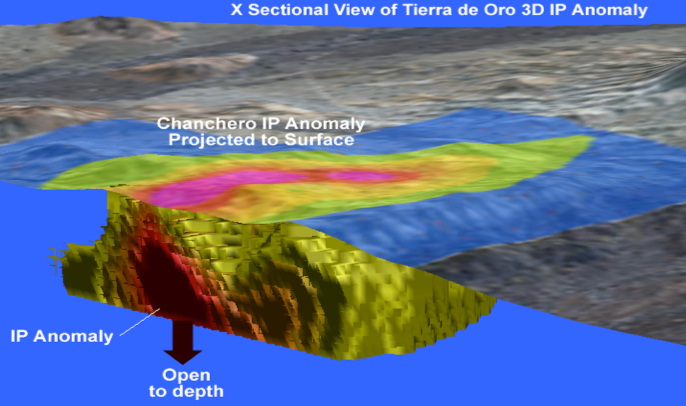 “We are excited to commence drilling on TDO. In particular we believe the AI guidance will focus our search and enhance our odds of drilling success. Chanchero the large IP anomaly was home of the “Chanchero Gold Rush” in Chile in the early 1900’s and we believe it is possible the large IP anomaly could be the causative source of that mineralization. It’s the type of drill hole Junior Miners dream about. We have de-risked it as much as we can and we now need to drill it.” commented Terry Lynch Chilean CEO.

“We have worked in Chile before with Codelco and we were very excited to work with Chilean on Tierra De Oro. Our algorithms have had a lot of success with discovery of gold and base metals and we are optimistic Chilean will be able to utilize this information to have success in their coming drill programs.” commented Windfall Geotek CEO Michel Fontaine.

In addition to its projects in Chiles, Chilean Metals recently announced a proposed acquisition of the prospective early stage Golden Ivan project in the Golden Triangle, in British Columbia, Canada. The press release https://chileanmetals.com/wp-content/uploads/2020/11/CMX_GoldenIvanAquisitionFinal.pdf describes this opportunity. The deal is subject to delivery to the TSXV of a Technical report on the project which is expected to be delivered in early January.

ON BEHALF OF THE BOARD OF DIRECTORS OF
Chilean Metals Inc.

The technical content of this news release has been reviewed and approved by Luke van der Meer, B.Sc., P.Geo., who is independent the company, and is a qualified person as defined by National Instrument 43-101.

Hand grab and rock outcrop ground truth samples were collected by typical filed methods, and were analysed by Activation Geological Services (AGS) of Copiapó, Chile. Gold was tested by Fire Assay Fusion with an atomic absorption finish on a 30g nominal sample, Additional analyses for Silver, Copper, and Cobalt only, were completed using a four-acid digestion. No additional QA/QC samples were collected for this sampling program, however AGS maintains an internal (blind) quality assurance and control (QAQC) program throughout the sample preparation and analysis process.