Investing News Network
First Cobalt Corp. is pleased to announce that it has entered into a letter of intent with Kuya Silver Corporation to sell a portion of its silver and cobalt mineral exploration assets in the Canadian Cobalt Camp and form a joint venture to advance the remaining mineral assets. The transaction will allow the two companies to resume mineral exploration activities in a historic silver district while providing First ...

First Cobalt Corp. (TSXV: FCC) (OTCQX: FTSSF) (the "Company") is pleased to announce that it has entered into a letter of intent with Kuya Silver Corporation ("Kuya") to sell a portion of its silver and cobalt mineral exploration assets in the Canadian Cobalt Camp and form a joint venture to advance the remaining mineral assets. The transaction will allow the two companies to resume mineral exploration activities in a historic silver district while providing First Cobalt capital for the recommissioning of its Canadian refinery.

First Cobalt shall have a right of first offer to refine base metal concentrates produced at First Cobalt's refinery as well as a back-in right for any discovery of a primary cobalt deposit on the Remaining Assets.

The parties intend to complete the transaction in Q1 2021, at which point Kuya will own the Kerr Assets outright. The companies will form a 70-30 joint venture on the Remaining Assets if and when all of the conditions outlined above are satisfied. The partnership with Kuya demonstrates the Company's commitment to creating value for its shareholders as it continues to focus on cobalt.

Cormark Securities Inc. is acting as advisor to First Cobalt in connection with this transaction. Completion of the transaction remains subject to negotiation of definitive documentation between the companies.

"This transaction will provide capital to advance the First Cobalt refinery project while we advance a larger debt financing solution. The electric vehicle landscape is moving quickly and proceeds from this transaction will allow us to remain on schedule, while reducing dilution.

Equally important is the partnership that we are forming with Kuya to continue advancing a one-of-a-kind Canadian silver and cobalt district. First Cobalt has spent a considerable amount of time consolidating this historic high-grade mining district and has made great strides towards reviving what was once a world class silver and cobalt mining camp. Kuya's leadership team has tremendous experience with high grade silver deposits and we look forward to working with them on these coveted assets." 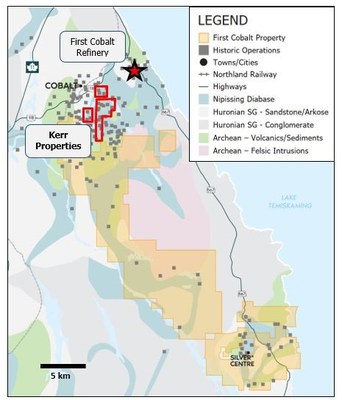 First Cobalt holds the largest land package in the historic silver-cobalt mining camp of Cobalt, Ontario , with more than 10,000 hectares and over 50 of the more than 100 past-producing mines, including some of the region's largest high-grade silver producers. The Company invested $10 million in an extensive exploration program that included creating a proprietary 3D geological model based on digital compilation of historic mine workings, integrated with exploration drilling and surface bedrock geology maps.

Over 600 million ounces of silver and 50 million pounds of cobalt were mined in the district along with copper and nickel over a 60-year period. Peak production occurred from 1919 to 1931. Exceptionally high-grade vein-style, native silver mineralization was mined at up to 185 oz/t Ag (5,200 g/t Ag) from surface and underground.

The Kerr Assets include eight historic silver mines on a contiguous 900-hectare area: Crown Reserve, Kerr Lake , Lawson, Drummond , Conisil, Hargrave, Silver Leaf, Bailey. These mines produced over 50 million ounces of silver and 900,000 pounds of cobalt, mainly between 1905 to 1950. The deepest shaft was less than 200 metres. Also included in the Kerr Assets is the nearby Silverfields property, which was mined by Teck until 1989 to a depth of 300 metres, producing over 17 million ounces of silver, demonstrating the depth potential to some mineralized systems.

In 2017-18, the Company completed 253 shallow drill holes for over 35,000 metres on 12 target areas across the Camp. The focus at that time was to identify near-surface cobalt-silver mineralization amenable to open pit mining. Numerous bonanza grade intercepts were encountered during that initial campaign that warrant follow up.

The Company's prior exploration drilling at Kerr has yielded very promising drill results, including 1,442 g/t silver and 0.28% cobalt over 2.5 metres, 820 g/t Ag and 0.45% Co over 3.6 metres and 515 g/t Ag and 0.61% Co over 2.2 metres. Drilling intersected mineralized vein networks within distinct zones. The first zone is over a 500m strike length corresponding with the historic Crown Reserve, Lawson, and Kerr Lake mines. Approximately 400m to the south, a second mineralized zone was identified that runs parallel and extends for over 350m in strike length. Further drilling near Drummond intersected cobalt-silver mineralization across an area of 200m by 300m separate from these zones. Within these three zones, mineralization occurs as several intersecting cobalt-silver veins controlled by regional structures. Continuity of mineralization has yet to be determined, but intersection widths and grades show the potential for either underground or open pit resources remains.

The Remaining Assets cover more than 9,000 hectares and include historic mines within the Silver Centre area where exploration drilling intersected new cobalt-silver veins that remain to be fully tested. A new conceptual model for mineralization based on the Kerr area led to identifying other prospective areas in the Cobalt Camp. Certain areas within Cobalt Central are geologically similar to the Kerr area but have been under-explored due to poor bedrock exposure and the extent of Nipissing Diabase cover over the prospective sedimentary and volcanic rocks. Both the Schumann Lake and Caswell areas are considered highly prospective for mineralization below cover. At Schumann Lake, minor reconnaissance drilling has been completed by the Company based on new structural interpretations of surface mineralization showings as well as geophysical and geochemical surveys. Positive results in the western portion of the Schumann Lake area are encouraging for future follow-up work.

First Cobalt owns North America's only permitted cobalt refinery. Cobalt refining is a critical component to the development and manufacturing of batteries for electric vehicles and forms a foundational piece of the next generation of the North American auto sector and other electrified consumer and industrial applications. First Cobalt owns the Iron Creek cobalt-copper project in Idaho, USA and controls significant silver and cobalt assets in the Canadian Cobalt Camp, including more than 50 past producing mines.

Best Gold Stocks on the TSX