First Cobalt Corp. today announced the resumption of exploration activities at its Iron Creek cobalt-copper deposit in Idaho, USA . As the cobalt market continues to strengthen, the Company is commencing geophysical surveys to trace extensions of mineralization and follow up on geophysical anomalies detected by previous work. Highlights Objective is to refine follow-up drill targets further east along strike of the …

First Cobalt Corp. (TSXV: FCC) (OTCQX: FTSSF) (the “Company”) today announced the resumption of exploration activities at its Iron Creek cobalt-copper deposit in Idaho, USA . As the cobalt market continues to strengthen, the Company is commencing geophysical surveys to trace extensions of mineralization and follow up on geophysical anomalies detected by previous work.

“Developing a domestic supply of cobalt and other critical minerals has taken a new urgency in 2020, as North America strives to become less reliant on foreign supply.

“The Idaho Cobalt Belt is a unique geological setting for primary cobalt deposits unlike any other areas in the world. New funding programs within the U.S. Department of Energy, the Department of State and the Department of Defense underscore the priority the U.S. government is placing on developing its domestic critical minerals supply chain.

“Since publishing an updated cobalt and copper resource estimate for Iron Creek earlier this year, we have had a three-pronged focus: extending cobalt mineralization to the east, extending copper mineralization to the west, and identifying new targets within a 2-kilometre radius on the property. This geophysics program will increase our confidence in existing drill targets that could expand the Iron Creek deposit and provide new targets.

“In 2019, we announced high grade cobalt assays up to 0.48% cobalt at a prospect 1.5 kilometres south of Iron Creek called Ruby. Ruby is exposed along a 300m strike extent and represents further near-surface potential for cobalt and copper mineralization on the First Cobalt’s property.”

The geophysical survey is expected to take three weeks to complete and consists of induced polarity and resistivity measurements covering the eastern and western portion of the Iron Creek cobalt-copper mineralized zone and extending beyond and along strike (Figure 1). In 1971, following development of 600m of underground workings that confirmed the consistency and continuity of cobalt-copper grades, geophysical surveys were conducted at surface to aid exploration for further resources. This data was recovered from files and maps, then reviewed and interpreted in light of borehole geophysical surveys conducted in 2018 by First Cobalt. The review indicated induced polarity and resistivity methods detect mineralization to 300m below surface, a depth at which past drilling has intersected mineralization.

In the west, mineralization is covered at surface by the Challis Volcanics, a relatively young rock sequence that is un-mineralized and is 50- 70m thick. The western portion of mineralization is copper-rich consisting of 10-50cm semi-massive bands and stringers of chalcopyrite that are typically well detected by these electro-geophysical methods. First Cobalt drilling also encountered mineralization in the hangingwall above the mineralized zone in this area that will also be potentially outlined by the geophysical survey.

The previous survey also detected a chargeable inducted polarity anomaly in the east that corresponds to the stratigraphic footwall below the Iron Creek resource. The upcoming program is designed to resolve the location of the anomaly for proper drill testing to determine if additional cobalt-copper mineralization is associated with the geophysical response. Footwall mineralization was encountered during resource drilling but has not been modelled for estimation since the intersections were widely spaced.

Several exposures of cobalt-copper mineralization occur within the property. At Ruby, surface channel sampling along 146 metres of the exposure returned several high-grade values, up to 7.6m of 0.26% Co and 10.7m of 0.24% Co, including 1.5m of 0.48% Co (previously reported October 30, 2019 ). Ruby is located 1.5 km from the Iron Creek deposit and occurs within a similar host-rock sequence that may be a structural offset to Iron Creek or a separate stratigraphic unit.

Other exposures of mineralization in the southern portion of the property have not been drilled tested but do demonstrate further potential for future follow-up exploration.

Iron Creek is one of many cobalt-copper resources and prospects within the Idaho Cobalt Belt where the United States Geological Survey has deemed these resources to be strategically important as a domestic supply of cobalt. 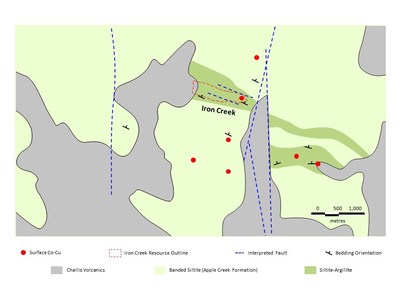 The contents of this news release have been reviewed and approved by Dr. Frank Santaguida , P.Geo., a Qualified Person as defined by National Instrument 43-101. Dr. Santaguida is a practicing member of the Association of Professional Geologists of Ontario and is employed by First Cobalt as Vice President, Exploration. Quality assurance and quality control standards of cobalt and copper values can be found in the respective press releases previously published.

First Cobalt owns North America’s only permitted cobalt refinery. Cobalt refining is a critical component to the development and manufacturing of batteries for electric vehicles and forms a foundational piece of the next generation of the North American auto sector and other electrified consumer and industrial applications. First Cobalt owns the Iron Creek cobalt project in Idaho, USA and controls significant silver and cobalt assets in the Canadian Cobalt Camp, including more than 50 past producing mines.