Vancouver, BC, Canada TheNewswire – April 22, 2021 Rock Tech Lithium Inc. (the “Company” or “Rock Tech”) (TSXV:RCK ) ; ( Frankfurt:RJIB); (OTC: RCKTF ) is pleased to update the market on progress of the Phase 1 pilot plant, metallurgical testwork and engineering development for its Georgia Lake and Converter projects.

To support the basic engineering development for the Converter Project and inform the Phase 1 pilot program (previously announced on February 16, 2021), a metallurgical testwork program has been ongoing since December 2020. Nagrom laboratories was appointed to complete a bench scale testwork program under management by Wave International.

The program was designed to prove the robustness of the flowsheet to produce Battery Grade Lithium Hydroxide from a range of spodumene sources. Coarse DMS concentrate, low grade DMS concentrate, and combined DMS and flotation concentrate samples from various global sources (including Georgia Lake, and commercially produced concentrates) are part of the testwork program.

The testwork program for the conventional sulphation route has progressed through the unit process of calcination, acid roast, water leach and impurity removal, causticisation and glauber’s salt crystallisation on the three different samples. Crude Lithium Hydroxide crystallization is currently in progress and a final purified Lithium Hydroxide sample is anticipated in May.

This work informed the Phase 1 pilot underway at ALS and will inform an upcoming stage 2 pilot, as well as providing engineering data for ongoing engineering development. 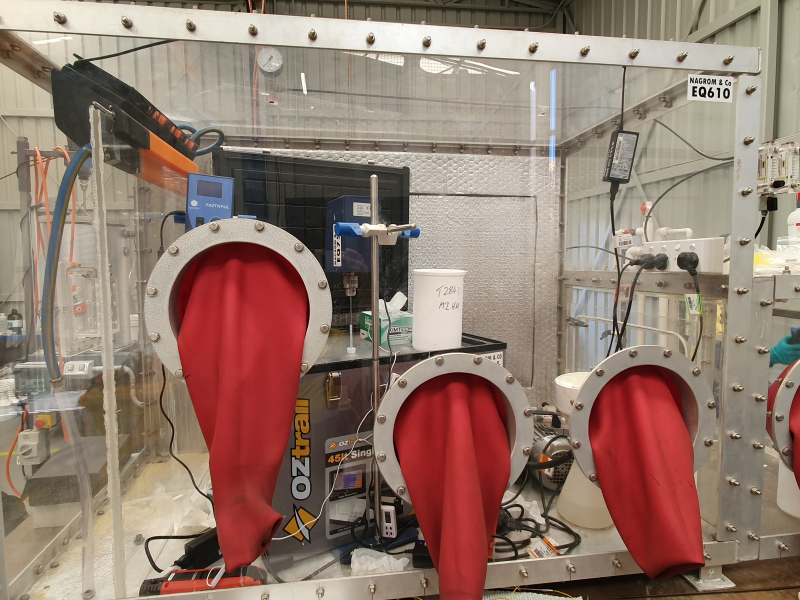 Nagrom, a privately owned Western Australian company, has been providing metallurgical services to the mining industry for over 30 years. Their Kelmscott facility (Perth, Western Australia) has over 100 processing units and a staff of 120 skilled resources. Nagrom is a recognized brand in the Lithium sector, with extensive spodumene and downstream lithium testwork experience across major and emerging producers.

Work is ongoing with ALS Laboratories, with purification and causticisation works complete. The next stages of the works are glauber’s salt crystallization, followed by crude Lithium Hydroxide crystallization. All testwork to date has performed as expected by the PFS conventional flowsheet, and per the bench scale testwork program. The final purified Lithium Hydroxide sample from the Phase 1 pilot plant is anticipated to be produced by June 2021.

The lithium hydroxide samples produced during the metallurgical testwork program and the Phase 1 pilot will be used to intensify offtake discussions with potential customers.

Heavy Liquid Separation (HLS) and Dense Media Separation (DMS) work has been completed on core samples from Georgia Lake. Nagrom laboratories was appointed to complete this testwork program, under management by Wave International. The testwork program was designed to test composites of different lithological classifications across a range of processing parameters. In addition to contributing to the testwork program for further studies on the Georgia Lake Lithium Project, it generated concentrate for the Converter metallurgical testwork program.

The scientific and technical disclosure included in this news release has been reviewed and approved by Christopher John Larder, FAusIMM, an independent Qualified Person under National Instrument 43-101 Standards of Disclosure of Mineral Projects (“NI 43-101”).