LUCARA ANNUAL GENERAL AND SPECIAL MEETING TO BE HELD MAY 6, 2022

Lucara Diamond Corp. ("Lucara" or the "Company") announces that its Annual General and Special Meeting of Shareholders will be held at the office of Blake, Cassels & Graydon LLP, Suite 2600, 595 Burrard St., Vancouver, British Columbia V7X 1L3, on Friday, May 6, 2022 at 11:00 a.m. Pacific Standard Time , for the following purposes: View PDF .

The record date for the Annual General and Special Meeting is March 23, 2022 . The Notice of Meeting, the accompanying Management Proxy Circular and related meeting materials are available under the Company's profile on SEDAR at www.sedar.com and on the Company's website at https://lucaradiamond.com .

The Corporation encourages you to vote your shares by proxy in advance of the Meeting, via mail, telephone or on the internet. Voting instructions need to be received at least one business day before the proxy deposit date. The proxy deposit date is May 4, 2022 , 11:00 a.m. (Pacific Standard Time) , any proxy form received after that time will not be valid. In conducting the Meeting on May 6, 2022 , the Corporation intends to follow the guidelines for physical distancing prescribed by the Public Health Agency of Canada to minimize the spread of the novel coronavirus disease (COVID-19), as such guidelines are applicable as at the date of the Meeting. No management presentation will be made following the business of the Meeting.

NOMINATION OF NEW DIRECTORS
The term of office of each of the present directors expires at the Meeting. On February 17, 2022 , Mr. Lukas Lundin , current Chair and a Director of the Corporation, indicated his intention to retire from the Board ( link to press release ). Six of the nominees are existing directors of the Corporation and Mr. Adam Lundin is nominated for election to the Board to replace Mr. Lukas Lundin .

Eira Thomas, President & CEO commented: "On behalf of the Board and management team of Lucara, I would like to once again express our gratitude and thanks to Lukas for his wise counsel and leadership over more than a decade, helping to build Lucara into one of the world's leading producers of large, exceptional, high value gem diamonds and the only diamond mine to recover three diamonds in excess of 1000 carats. At the same time, we are delighted to be recognizing the ongoing support and commitment of the Lundin family with the nomination of Adam Lundin to our Board of Directors at a critical time, as we push forward with the Karowe underground mine expansion, expected to add at least $4 billion in revenues out to at least 2040."

Mr. Adam Lundin has many years of experience in capital markets and public company management across the natural resources sector. His background includes oil & gas and mining technology, investment advisory, international finance and executive management. He began his career working for several Lundin Group mining companies in various countries before moving into finance where he specialized in institutional equity sales, ultimately becoming co-head of the London office for an international securities firm. Mr. Lundin is currently the President, CEO and a Director of Josemaria Resources, another Lundin Group company. Mr. Lundin was the former President and CEO of Filo Mining, and now serves as the Chairman of the Board. He is also a Director of NGEx Minerals Ltd., Lundin Energy AB and the Lundin Foundation.

Lucara is a leading independent producer of large exceptional quality Type IIa diamonds from its 100% owned Karowe Mine in Botswana . The Company has an experienced board and management team with extensive diamond development and operations expertise. The Company operates transparently and in accordance with international best practices in the areas of sustainability, health and safety, environment and community relations.

The information in this release is accurate at the time of distribution but may be superseded or qualified by subsequent news releases.

The information was submitted for publication, through the agency of the contact persons set out above, at 3:30 PM Pacific Time on April 7, 2022 .

Forward-looking statements are based on the opinions and estimates of management as of the date such statements are made, and they are subject to a number of known and unknown risks, uncertainties and other factors which may cause the actual results, performance or achievements of the Company to be materially different from any future results, performance or achievement expressed or implied by such forward-looking statements. The Company believes that expectations reflected in this forward-looking information are reasonable, but no assurance can be given that these expectations will prove to be accurate and such forward-looking information included herein should not be unduly relied upon.

In particular, forward-looking information and forward-looking statements in this news release may include, but are not limited to, information or statements with respect to expected revenues over the remaining life of mine and how long the Company will be able to operate the Karowe Mine.  There can be no assurance that such forward looking statements will prove to be accurate, as the Company's results and future events could differ materially from those anticipated in this forward-looking information as a result of those factors discussed in or referred to under the heading "COVID-19 Global Pandemic" in the Company's most recent MD&A and under the heading "Risks and Uncertainties" in the Company's most recent Annual Information Form, both available at http://www.sedar.com , as well as changes in general business and economic conditions, the ability to continue as a going concern, changes in interest and foreign currency rates, changes in inflation, the supply and demand for, deliveries of and the level and volatility of prices of rough diamonds, costs of power and diesel, impacts of potential disruptions to supply chains, acts of foreign governments and the outcome of legal proceedings, inaccurate geological and recoverability assumptions (including with respect to the size, grade and recoverability of mineral reserves and resources), and unanticipated operational difficulties (including failure of plant, equipment or processes to operate in accordance with specifications or expectations, cost escalations, unavailability of materials and equipment, government action or delays in the receipt of government approvals, industrial disturbances or other job actions, adverse weather conditions, and unanticipated events relating to health safety and environmental matters).

Accordingly, readers are cautioned not to place undue reliance on these forward-looking statements which speak only as of the date the statements were made, and the Company does not assume any obligations to update or revise them to reflect new events or circumstances, except as required by law. 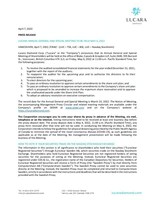 Star Diamond Corporation ("Star Diamond") announces that, at a meeting of the Fort à la Corne joint venture management committee held earlier today, Rio Tinto Exploration Canada Inc. ("Rio Tinto") exercised its voting power to place the Star Orion South Diamond Project (the "Project") on care and maintenance through December 31 2022.  As part of this, Rio Tinto has advised that, subject to fulfilling its existing obligations, it does not intend to commit additional capital to the Project during 2022 beyond what is necessary for care and maintenance.

Tres-Or Resources Ltd. (TSXV: TRS) (OTC Pink: TRSFF) ("Tres-Or" or the "Company") reports that it intends to aggressively pursue its civil claim against Secova Metals Corp. ("Secova") in the amount of $199,875 plus interest (the "Claim") filed with the Supreme Court of British Columbia on January 5, 2022 as Secova has failed to respond to any initiatives by the Company to resolve the matter. The Claim arose as a result of Secova's failure to repay certain expenditures incurred by the Company on behalf of Secova pursuant to an Amended and Restated Option Agreement between the parties.

VIDEO — Chris Dessi: US$1.2 Trillion Diamond Market Ripe for Unlocking, Here's How to Do It

The diamond market is worth an impressive US$1.2 trillion, but remains relatively untouched by investors.

Speaking to the Investing News Network (INN) at the recent Vancouver Resource Investment Conference (VRIC), Chris Dessi, chief revenue officer at Diamond Standard, explained how the company is looking to change that.

"Of the US$1.2 trillion worth of diamonds, less than 1 percent is held as an investment," he explained. "We've effectively unlocked that by creating the diamond standard — the literal diamond standard."

Star Diamond Corporation ("Star Diamond or the Corporation") is pleased to announce that the Corporation has completed a study into the abundance of Type IIa diamonds in the Trench Cutter diamond parcels recovered from the Early Joli Fou ("EJF") geological units at the Star Kimberlite, as defined by the Star Diamond geological model. The Star Kimberlite is located within the Fort à la Corne diamond district of central Saskatchewan, Canada (which contains the Star - Orion South Diamond Project), on mineral dispositions held in a joint venture with Rio Tinto Exploration Canada Inc. ("Rio Tinto Canada"). During 2019, Rio Tinto Canada completed the drilling of ten bulk sample holes (trenches) on the Star Kimberlite using a Trench Cutter Sampling Rig. This study confirms that unusually high proportions of Type IIa diamonds are present in the Star Kimberlite. Of particular note is the exceptionally high proportion of Type IIa diamonds in the larger size fractions of the EJF of which 53 percent (8 of the 15) of the largest stones, 4 carats and above are Type IIa. This study also confirms and augments earlier studies conducted by Star Diamond of Type IIa diamonds at Star (26.5 percent, +11 DTC (0.32 carats) and above) (see News Releases dated June 09, 2010 March 4, 2019 and May 02, 2022 ). Type IIa diamonds are very rare and account for less than 2 percent of all natural rough diamonds mined from kimberlites. Many high-value, top colour, large specials (greater than 10.8 carats) are Type IIa diamonds, which include all ten of the largest known rough diamonds recovered worldwide.

Mountain Province Diamonds Announces Changes to its Board of Directors

Mountain Province Diamonds Inc. (TSX: MPVD) (OTC: MPVDF) ("Mountain Province", or the "Company") is pleased to announce the appointment of Ms. Kelly Stark-Anderson to its Board of Directors. Her appointment follows the departure of Dean Chambers who has chosen the step-down due to other commitments.

Star Diamond Corporation ("Star Diamond" or the "Corporation") is pleased to announce that all of the nominees listed in the management proxy circular dated March 29, 2022 were elected as directors of the Corporation at its annual meeting of shareholders held on May 18, 2022 (the "Meeting").