Vancouver, British Columbia TheNewswire - June 23, 2022 - Leocor Gold Inc. (the " Company " or " Leocor ") (CSE:LECR ) ( OTC:LECRF ) ; ( Frankfurt:LGO) is pleased to announce it has completed mobilization of a Rotary Air Blast ("RAB") drill and initiated drilling on the Company's Baie Verte project located near Anaconda Mining's Pine Cove Mine and Rambler Metal's Ming Mine in northwestern Newfoundland. The Phase 1 program will test at least 6 different target areas for gold andor copper mineralization with 25 30 RAB drill holes and is designed to follow up on previously announced soil and GT Probe results (1) ; evaluating the targets for potential follow up diamond drilling as warranted. The Company is also initiating work programs on it's Western Exploit and Gander District properties and details of those programs will be forthcoming in future news releases.

The Phase 1 RAB Drilling program will consist of 25-30 drill holes and test at least 6 target areas across the Baie Verte property including the Dorset, Gunshot, Dorset SW, Copper Creek SW, FMB, and Copper Creek target areas. The program will follow up on previously announced gold and copper soil and GT Probe results over a 7km trend across the property (1) and is designed to evaluate the targets for potential diamond drilling.

The RAB drilling will be completed by GroundTruth Exploration Inc. using their "GT RAB Drill," a Heli-Portable, wireless remote-controlled, rubber tracked platform with a hydraulic tilting mast assembly and rotary drill head. The GT RAB Drill is environmentally friendly with low-ground pressure and minimal surface disturbance. Individual drill holes will be up to 100m in depth and will be paired with onsite XRF analysis and optical televiewer surveys, allowing rapid evaluation of the target areas. 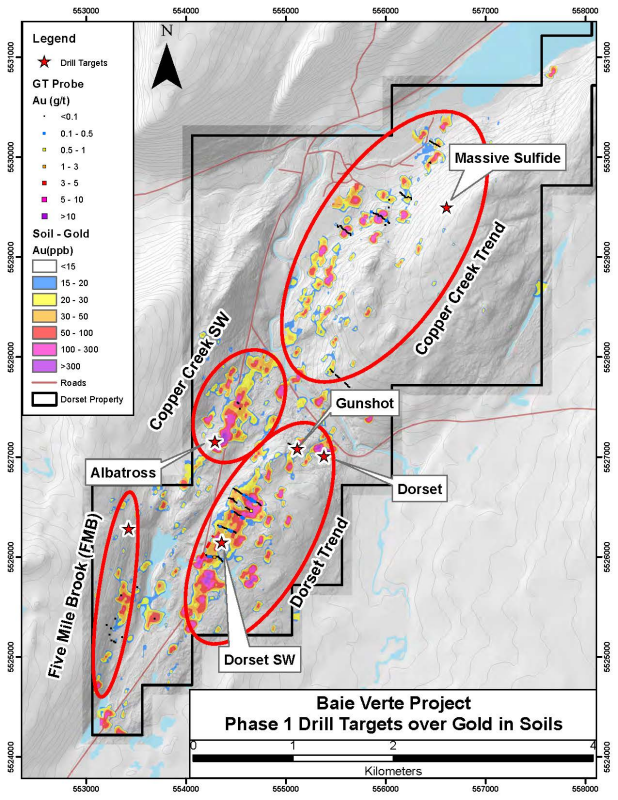 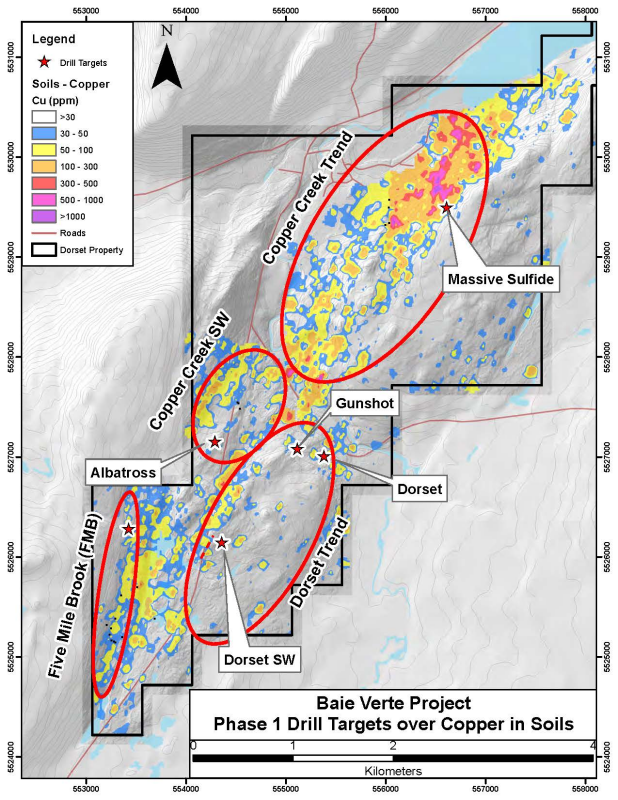 The Dorset trend consists of a 2.5 km gold in soil anomaly(s) located approximately 3km south of the Baie Verte townsite, extending from historic Dorset and Gunshot prospects (rock samples up to 57.2 g/t Au) to the southwest. RAB drilling on the trend will focus on the Dorset, Gunshot, and Dorset SW target areas. At Dorset and Gunshot, the drilling will test a series of NE striking, steeply west dipping quartz veins and breccia zones with sericite-ankerite alteration and pyrite, arsenopyrite, and, locally, visible gold mineralization. On the Dorset SW, the drilling with test a series of coincident soil and GT Probe anomalies (up to 1.19 g/t Au) over a 700m NE oriented trend.

The FMB Trend (Five Mile Brook Trend) is located 4km SSW of Baie Verte, less than 1km off of the main highway and consists of a 2km gold-arsenic soil anomaly associated with sheared and strongly contact of ultramafic and metavolcanic units with rock samples up to 1.31 g/t Au.

Copper Creek Southwest is located approximately 750m west kilometer of the Gunshot target and consists of a 1km NE trending soil anomaly with values up to 1135 ppb Au. The target was historically called the ‘Albatross Target' and was previously trenched and drilled by Noranda in the late 1980's. The historic work included grab samples of up to 30 g/t Au and drilling results of 1.0 g/t Au over 7 m (2) and is associated with a series of meter-scale quartz veins with pyrite-arsenopyrite.

The Copper Creek Trend consists of 2 km northeast trending Cu-Au soil anomaly(s) with highs of 2860 ppb Cu and 867 ppb Au. The northern area of the trend is defined by a 500m x 1000m copper anomaly associated with anomalous zinc (+/-gold); indicative of VMS style mineralization similar to the historic Terra Nova Mine; located approximately 1.5km to the west. Initial RAB drilling on the target will focus on a series of NE trending semi-massive to massive sulfide (pyrite-chalcopyrite) identified during recent follow up exploration on the trend.

The soils samples for the program are prepared at Eastern Analytical Laboratories. Samples are dried at 60 degrees Celsius and sieved to -80 mesh. The pulps are air couriered shipped to Bureau Veritas Labs in Vancouver, British Columbia. The pulps are analyzed with the AQ201+U method, dissolving 15 grams in Aqua Regia and analyzed for 37 elements by ICP-MS technique.

All rock, GT Probe, and RAB samples will be prepared and analyzed by ALS Global Laboratories of Moncton, NB. The entire sample will be crushed to 70% passing -2 mm and then splitting off and pulverizing a 250-gram split to 85% passing -75 microns. A 0.5 gram cut of the pulp will be analyzed by ME-ICP41, an aqua regia digestion followed by ICP-AES analysis for 35 elements. Gold will be analyzed for by AA-AU23 using a 30-gram charge for a standard fire assay with an AA finish. If Au results were >10 g/t a second 30-gram charge will be used for a standard fire assay with a gravimetric finish.

The reported work will be completed using industry standard procedures, including a quality assurance/quality control ("QA/QC") program consisting of the insertion of certified standard, blanks and duplicates into the sample stream. 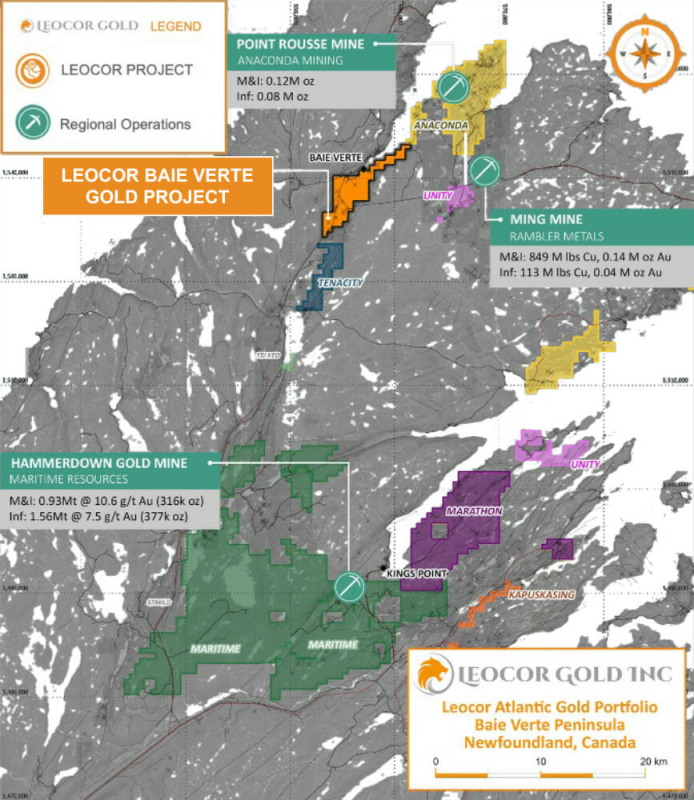 The Baie Verte Peninsula represents one of the more productive and historical gold and base metal mining districts in Canada. The former Terra Nova base metal mine – one of several copper mines of the region, which operated during the late 1880's to early 1900's – lies 200 meters west of Leocor's Copper Creek claims. Former gold mining operations in the area include the Goldenville mine (of 1903-1906), located 8 km NE of the property, and the more recent Nugget Pond mine (1997-2000) of the eastern Baie Verte Peninsula area. Currently producing mines in the area include the Rambler base metal-gold mine (1961-present), located 14 km ESE of Baie Verte, and the Pine Cove and Stogertite mines (collectively, 2011-present) located 1.6 km and 5.4 km NE of the current property.

Other zones include The Albatross, where historic rock sampling of mineralized zones returned values up to 30.3 g/t Au. Assay results from three 1987 diamond drill holes include 1.0 g/t Au over 7.3m, 1.81 g/t over 4.3m and 1.02 g/t over 2.2m and the Gunshot Zone, where veins containing visible gold and pyrite returned grab samples that assayed up to 162 g/t Au and channel samples that assayed up to 18 g/t Au over 0.4m (MacDougall, 1989)

Copper Creek (1,025-ha) hosts a number of gold prospects and copper occurrences associated with extensive alteration/shear zones developed within a thrust-faulted sequence of quartz-Fe-carbonate-fuchsite-altered gabbros, ultramafics and mafic volcanics, of the Advocate (ophiolite) Complex, and intermediate to silicic volcaniclastics & tuffs and microgabbroic dykes/sills, of the Flatwater Pond (cover sequence) Group. Historical results at Copper Creek – Biarritz zone include "values ranging from 1.3 to 16 g/t Au from grab samples and a combined assay of 3.9 g/t Au over 4.0m from detailed chip sampling." Additionally, "300m SW along strike exposed a 5-10m shear zone with similar alteration returned which returned sporadic values up to 9,2 g/t Au from grab samples" Noranda drilled several diamond holes in the area including A-88-7 which returned 0.66 g/t Au over 1.5 m and A-88-9 which returned 3.11 g/t Au over 0.5 m. (MacDougall, 1989).

Five Mile Brook (350-ha) has been subject to minimal exploration in the past but shows potentially important geological continuity to the Company's Dorset Gold Project, which lies directly contiguous to the northern boundary.

The data reported here is historic in nature and has not yet been verified by a Qualified Person. Leocor has relied on the information supplied in the Noranda assessment reports (quoted above) and from information found in MODS (Mineral Occurrence Data System) published by the Newfoundland Department of Natural Resources.

Jodie Gibson, P.Geo., consultant, and a Qualified Person as defined by National Instrument 43-101, has reviewed and approved the scientific technical content of this release.

This press release contains forward-looking information within the meaning of Canadian securities laws. Such information includes, without limitation, information regarding the terms and conditions of the Option. Although Leocor believes that such information is reasonable, it can give no assurance that such expectations will prove to be correct.

Forward looking information is typically identified by words such as: "believe", "expect", "anticipate", "intend", "estimate", "postulate" and similar expressions, or are those, which, by their nature, refer to future events. Leocor cautions investors that any forward-looking information provided by Leocor is not a guarantee of future results or performance, and that actual results may differ materially from those in forward looking information as a result of various factors, including, but not limited to: the agreement of the parties to proceed with the proposed transaction on the terms set out in the Option Agreements or at all; Leocor's ability to exercise the Options; the state of the financial markets for Leocor's securities; the state of the natural resources sector in the event the Option, or any of them, are completed; recent market volatility; circumstances related to COVID-19; Leocor's ability to raise the necessary capital or to be fully able to implement its business strategies; and other risks and factors that Leocor is unaware of at this time. The reader is referred to Leocor's initial public offering prospectus for a more complete discussion of applicable risk factors and their potential effects, copies of which may be accessed through Leocor's issuer page on SEDAR at www.sedar.com.

NV Gold Corporation (TSXV:NVX)(OTCQB:NVGLF)(FSE:8NV) ("NV Gold" or the "Company") is pleased to announce that it has received the approval of the Notice of Intent ("NOI") for the Company's SW Pipe Gold Project in Lander County, Nevada ("SW Pipe

Aben Resources Ltd. (TSX-V: ABN ) (OTC QB : ABNAF ) (Frankfurt: E2L2 ) ("Aben" or "the Company") announces that, further to its news release dated January 23, 2023, it has received the approval of the TSX Venture Exchange on the amendment to the option agreement dated November 9, 2021 (the "Agreement") with Eagle Plains (the "Optionor") whereby the Company may acquire a 100% interest in the Slocan Graphite Property in Southern British Columbia (the "Property").

Snowline Gold Corp. (CSE:SGD)(OTCQB:SNWGF) (the "Company" or "Snowline") is pleased to announce additional preliminary assay results from its 2022 drilling program at the Valley Zone, Rogue Project, Yukon. Notably, hole V-22-028 intersected a zone of sheeted quartz vein mineralization within the Valley intrusion averaging 1.40 gt Au across 363.5 m from surface, including zones of 2.03 gt Au over 129.9 m and 2.15 gt Au over 42.3 m, with additional mineralization at depth (Tables 1 and 2). The hole was collared 121 m from the nearest hole (V-22-014; 285.2 m @ 1.45 gt Au) and drilled northeast, demonstrating continuity of mineralization within Valley's near-surface mineralized corridor. Assays remain pending for 26% (3,474 m) of the 2022 Rogue drill program

Vancouver, B.C. February 2, 2023 Bathurst Metals Corp. ("Bathurst" or the "Company") ( TSXV:BMV ) ( OTC:BMVVD ) is pleased to announce it has entered into a definitive Option Agreement with arm's length vendor BCT Holdings Corp . ("BCT") to acquire an undivided 100% interest in 12 mineral claims known as the "Peerless Property".  The Company previously entered into a letter of intent with BCT, the terms of which were announced on November 17, 2022.

Drilling continues to confirm mineralization at Lapon Canyon and extend the Hotspot zone. At total of ten (10) holes were drilled here, including seven (7) at the new Hotspot zone, discovered during 2022.