Falcon Gold Corp. (TSXV:FG)(GR:3FA)(OTCQB:FGLDF); ("Falcon" or the "Company")., is pleased to report the Company has contracted Balch Exploration to fly AirTEM surveys over the Corporation's large land position within the HSP Nickel-Copper-Cobalt Project area. (See figure 1

AirTEM was successfully employed by Go Metals at their HSP Project area and ground follow-up of the identified AirTEM anomalies, including trenching and direct drilling, which led to their new nickel discovery.

"We are following the same successful strategy utilized by Go Metals and will be flying our entire land position within the HSP project area. Airborne electromagnetic and magnetic surveys are a proven exploration strategy to directly detect conductive nickel sulfide mineralization. We look forward to reporting back on the findings once the data has been collected and interpreted." Stated, Karim Rayani, Chief Executive Officer

On October 5th the Company announced the acquisition of 413 claims covering 22,302 hectares of strategic ground through an option agreement and staking contiguous and proximal to Go Metals Corp, HSP Nickel Copper PGE Project 130 km north of Havre St. Pierre, Quebec. The staking covers approximately 135 km of prospective contact of the Havre St. Pierre Anorthositic Complex (HSAP) where Go Metals Corp recently announced the discovery of "Wide Intervals of Nickel and Copper Sulphides". (Go Metals Press Release Dated September 13, 2022). The most westerly block of the Falcon Gold claims covers the southwest extension of the Anorthositic Complex, on a prospective fold nose structure and is located less than 2.2 km from prominent airborne TDEM anomalies identified by Go Metals and host to the Nickel-Copper mineralization (Figure 1). 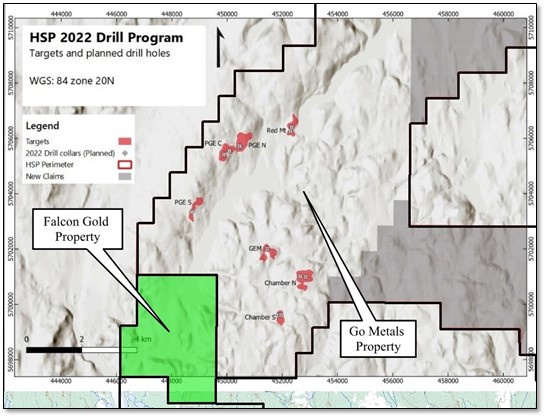 On June 22nd, 2022, the Company acquired the Timmins West and Outarde nickel projects northeast of Timmins, Ontario and northwest of Baie-Comeau, QC respectively.

Timmins West comprises of 1,940 hectares within the Kamiskotia gabbroic complex (KGC) located 20 kilometres (km) northwest of Timmins, Ont. The KGC is a gabbroic to anorthositic intrusive mafic to ultramafic body that has documented nickel-copper-cobalt (Ni-Cu-Co) mineralization. An outcrop grab sample in 2004 reported 0.44% Ni, 0.64% Cu and 0.033% Co hosted within pyrrhotite. The property lies 40 km southwest of the Crawford Ni-Co project being developed by Canada Nickel.

The KGC property shares many similarities to other well-known complexes such as the Bushveld complex (South Africa), the Stillwater complex (United States) and Bell River Dore Lake complexes (Quebec). The Timmins West Ni-Cu-Co property has historically been explored for gold. However, its mafic to ultramafic composition within the KGC makes it a prime target for magmatic Ni-Cu-Co mineralization.

The Outarde Property comprises 93 claims covering 5,138 hectares located 120 km northwest of Baie-Comeau, QC. The property contains nickel-copper-cobalt-style mineralization and was last explored by Falconbridge in 1997. The property is located at the folded nose of a gabbro-norite suite of mafic rocks, part of the large anorthositic-gabbro pluton of the De La Blache mafic plutonic suite. The gabbro-norite body occupies the entire length of the property (about 30 km) and has only been intermittently explored. Nickel- and copper-bearing sulphides are generally located in fracture or shear zones. Values up to 1.28% Ni, 1.38% Cu and 700 ppm Co was collected from a grab sample. The property has not been drilled. Grab samples are selected samples and not necessarily representative of the mineralization hosted on the property.

Wayne Holmstead, P. Geo, an independent qualified person as defined in National Instrument 43-101, has reviewed, and approved the technical contents of this news release on behalf of the Company. The QP has not completed sufficient work to verify the historic information on the properties comprising the HSP Property, particularly regarding historical exploration, neighboring companies, and government geological work. The information provides an indication of the exploration potential of the Property but may not be representative of expected results.

Falcon is a Canadian mineral exploration company focused on generating, acquiring, and exploring opportunities in the Americas. Falcon's flagship project, the Central Canada Gold Mine, is approximately 20km southeast of Agnico Eagle's Hammond Reef Gold Deposit which has currently estimated 3.32 million ounces of gold (123.5 million tonnes grading 0.84 g/t gold) mineral reserves, and 2.3 million ounces of measured and indicated mineral resources (133.4 million tonnes grading 0.54 g/t gold). The Hammond Reef gold property lies on the Hammond shear zone, which is a northeast-trending splay off the Quetico Fault Zone ("QFZ") and may be the control for the gold deposit. The Central Gold property lies on a similar major northeast-trending splay of the QFZ.

Neither TSXV nor its Regulation Services Provider (as that term is defined in the policies of the TSXV) accepts responsibility for the adequacy or accuracy of this release.

Falcon Gold Corp. (TSXV:FG)(FRA:3FA)(OTCQB:FGLDF); ("Falcon" or the "Company")., is pleased to report on the expansion of our HSP south project by staking an additional 290 claims. This has increased our total claims to 703, covering 37,962 hectares in the Havre St. Pierre Anorthosite Complex (HSP Property Area) by 70

Falcon Gold Corp. (TSXV:FG)(GR:3FA)(OTCQB:FGLDF); ("Falcon" or the "Company") is pleased to announce that exploration has commenced at the Company's 100% owned Gander North Property, with initial results now available from its reconnaissance exploration program. The project commenced in late June, with initial prospecting and till sampling. Preliminary efforts have identified numerous evidence for quartz veins, including subcrop and float. Surface samples collected to date have been submitted for assay; and initial results have returned values of up to 885 ppb gold from sub cropping quartz veins, up to 0.15% copper, and up to 26.8 gpt silver from quartz float. Several samples have returned anomalous tungsten, and further analysis is required to confirm the content. Initial results for gold are presented in figure 1. Multiple geophysical targets were identified over the project area earlier this year through review of publicly available datasets, and these will be the focus of ongoing reconnaissance. Detailed work, including systematic sampling and geological mapping will commence this fall to better define targets in advance of drilling. Work permit applications have been submitted for the drill program, and approval is pending

Falcon Gold Corp. (TSXV:FG)(GR:3FA)(OTCQB:FGLDF); ("Falcon" or the "Company") is pleased to report it has entered into two separate arm's-length agreements, pursuant to which the company will acquire a 100-per-cent interest in two battery metals projects in the province of Ontario and Quebec, collectively known as the Timmins West and Outarde Nickel Project northwest of Baie Comeau, Quebec

Snowline Gold Corp. (CSE:SGD)(OTCQB:SNWGF) (the "Company" or "Snowline") is pleased to announce additional preliminary assay results from its 2022 drilling program at the Valley Zone, Rogue Project, Yukon. Notably, hole V-22-028 intersected a zone of sheeted quartz vein mineralization within the Valley intrusion averaging 1.40 gt Au across 363.5 m from surface, including zones of 2.03 gt Au over 129.9 m and 2.15 gt Au over 42.3 m, with additional mineralization at depth (Tables 1 and 2). The hole was collared 121 m from the nearest hole (V-22-014; 285.2 m @ 1.45 gt Au) and drilled northeast, demonstrating continuity of mineralization within Valley's near-surface mineralized corridor. Assays remain pending for 26% (3,474 m) of the 2022 Rogue drill program

Vancouver, B.C. February 2, 2023 Bathurst Metals Corp. ("Bathurst" or the "Company") ( TSXV:BMV ) ( OTC:BMVVD ) is pleased to announce it has entered into a definitive Option Agreement with arm's length vendor BCT Holdings Corp . ("BCT") to acquire an undivided 100% interest in 12 mineral claims known as the "Peerless Property".  The Company previously entered into a letter of intent with BCT, the terms of which were announced on November 17, 2022.

Drilling continues to confirm mineralization at Lapon Canyon and extend the Hotspot zone. At total of ten (10) holes were drilled here, including seven (7) at the new Hotspot zone, discovered during 2022.

While the Company and Canasil are not proceeding with the transactions contemplated by the LOI following its expiry, the parties may still explore alternative strategic transactions in the future.

Augusta Gold Corp. (TSX: G) (OTCQB: AUGG) (FSE: 11B ) (" Augusta Gold " or the " Company ") is issuing this press release in response to recent trading activity of its stock.

Augusta Gold is not aware of any material, undisclosed information related to the Company that would account for the recent decrease in the market price and increase in level of trading volume of its shares of common stock.

The Company further confirms that it has no agreements, paid research relationships or any other marketing arrangements with any parties to provide marketing services to the Company.

Augusta Gold is an exploration and development company focused on building a long-term business that delivers stakeholder value through developing the Reward and Bullfrog gold projects and pursuing accretive M&A opportunities. The Reward and Bullfrog gold projects are located in the prolific Bullfrog mining district approximately 120 miles north-west of Las Vegas, Nevada and just outside of Beatty, Nevada . The Company is led by a management team and board of directors with a proven track record of success in financing and developing mining assets and delivering shareholder value.