Gold Exploration in the Abitibi Greenstone Belt in Quebec

This Xander Resources profile is part of a paid investor education campaign.*

The Abitibi Greenstone Belt in Quebec, Canada, is the world’s largest mineral-rich greenstone geological belt, hosting many major gold and base metal deposits. The prolific region contains a gold-mining history unsurpassed by most gold districts, having yielded spectacular 180 million ounces of gold since the discovery of its first mining camps in the early 1900s.

The Abitibi combines the perfect storm of government stability and high-grade mineralization discovery potential. One company looking to make the next big discovery is Xander Resources (TSXV:XND, OTCQB:XNDRF, FWB:1XI), a junior exploration company focused on developing highly prospective gold properties within Canada. The company currently has three projects located across three gold camps on the Abitibi Greenstone Belt in Quebec.

Quebec is a prolific mining jurisdiction due to its Tier One mining status. The jurisdiction hosts high-grade mineralization and numerous precious metal occurrences. Additionally, the government-supported mining conditions, rich resource networks and skilled local workforces give Xander Resources exceptional positioning in its mining development and exploration.

The company is undervalued in the region, with its market cap being the lowest among explorers in the Abitibi. Xander Resources has the potential to mimic the discovery potential of the assets of neighboring companies, including Monarch Mining (TSX:GBAR) and Probe Metals (TSXV:PRB). Probe Metals recently returned drill results of 5.9 g/t gold over 9.2 meters and 94.1 g/t gold over 0.6 meters.

In January 2021, Xander announced plans to enter an option agreement to acquire a 100 percent interest in the 35 mineral claims located in Waswanipi, Quebec, known as the Bachelor North property. The asset, located in the Urban Barry gold camp, hosts widespread gold mineralization and excellent discovery potential in relation to its geographical neighbors.

Xander has commenced a major drilling program on the Senneville claim group, followed by advanced exploration of its well-positioned Bachelor North property and Blue Ribbon properties in 2021. Long-term plans for the company include further acquiring highly prospective gold properties across Canada, which could transition it to a major gold production player globally. 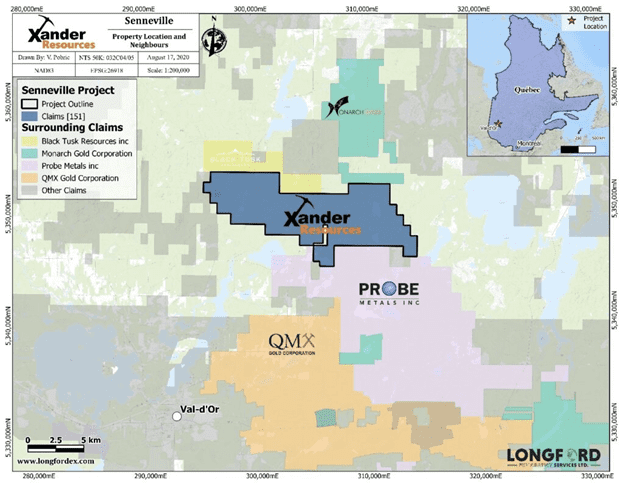 Xander’s Senneville group has the potential to mimic the discovery potential of neighboring assets, including Monarch Mining and Probe Metals, the latter of which returned recent drill results of 5.9 g/t gold over 9.2 meters and 94.1 g/t gold over 0.6 meters.

At Senneville South, drill program results from 2012 included two holes with mineralization at grades of 9.79 g/t and 11.03 g/t gold over 1 meter. Xander closed the purchase option to acquire 100 percent of Senneville South in September 2020.

In September 2020, Xander received the necessary permitting and conducted an exploration program as well as a successful magnetic geophysical survey campaign where multiple gold and base metal occurrences were returned. A drill program is planned for 2021.

Senneville East’s 62 claims cover the intersection between the Lanaudiere Formation Volcanics and the Pascalis Batholith. Prospecting on the property began in August 2020.

The Blue Ribbon property comprises 48 claims that cover approximately 1,885 hectares and is the only property in the camp with gold discovered at surface.. Ideal positioning places the asset 11 kilometers southwest of the Wallbridge Mining (TSX:WM) Fenelon project, which reported drill results of 22.73 g/t gold over 48.01 meters and 43.47 g/t gold over 19 meters. Additionally, the property is contiguous with Probe Metals, Midland Exploration and Great Thunder Gold, and nearby Goldseek Resources. 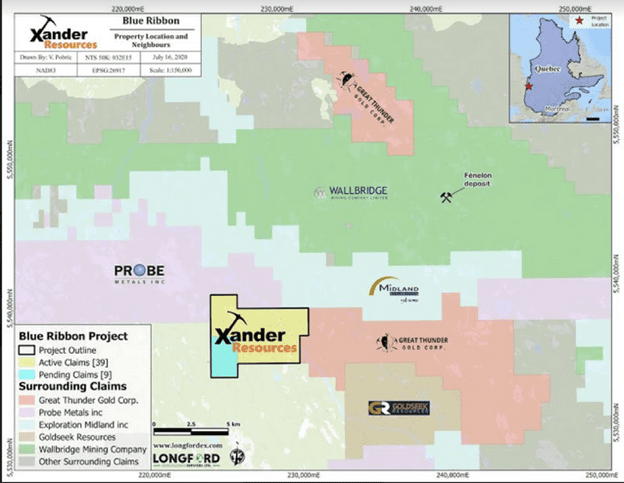 The Bachelor North property sits in the Urban Barry gold camp, one of the most active exploration camps in the world. The camp currently hosts 8 million ounces of gold with area investment by a major mining player, Kirkland Lake Gold (TSX:KL). The property is accessible via the 113 road from Chapais to Waswanipi. 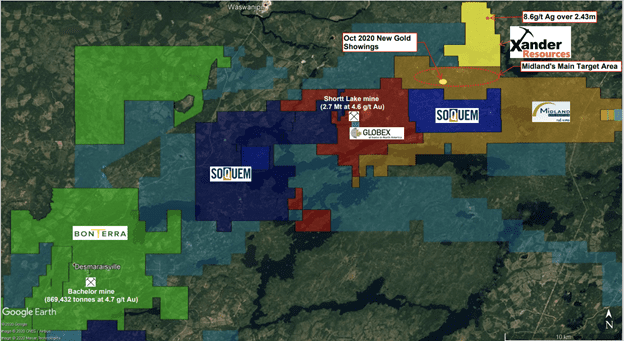 The rock profile covering the property ranges from felsic to mafic compositions, pointing to potential orogenic gold with granitic masses. Drilling from 1980 reported a silver showing of 8.6 g/t. The property remains relatively underexplored.

The company plans to conduct groundwork followed by sonic drilling during the 2021 exploration season. Till soil at surface level allows for a very cost-effective first pass of exploration work to generate targets.

Mr. Varshney is presently CEO and a Director of Usha Resources Ltd. (USHA.V), a gold and copper-focused junior mining exploration company, and CEO and Director of Orcus Resources Ltd., a Capital Pool Company (CPC). He is a professional geologist and has over 10 years of experience in the capital markets and mineral exploration and development sector.

Dwayne Yaretz is a seasoned entrepreneur with more than 25 years of experience in corporate leadership. He has acted for several private and publicly traded companies in various capacities, including as president, CEO and corporate secretary.

Michael Dehn has over 25 years of solid experience in Canada’s exploration and mining industry. Between 1994 and 2005, he worked as an exploration geologist and later became the senior geologist with Goldcorp. During his 11 year tenure with Goldcorp, Dehn played a vital role in Goldcorp’s regional exploration programs within the Red Lake gold district of Northern Ontario.

James Walker has extensive experience in engineering and project management; particularly within mining engineering, mechanical engineering, construction, manufacturing, engineering design, infrastructure, safety management, and nuclear engineering. He is currently the CEO and President and Director of Ares Strategic Mining and a Director of Bayhorse Silver Inc., both TSX Venture Exchange listed issuers, and a director of Orcus Resources Ltd.

Mr. Smith is currently the CEO of ArcPacific Resources Corp. and President, director of M3 Metals Corp., director of Go Metals Corp. and a director of Usha Resources Ltd. Mr. Smith is a professional geologist with over a decade of experience in the capital markets and mineral exploration and development sector. He has successfully executed multiple exploration programs and corporate strategies, including the acquisition, development and optioning of the Mohave Gold project in Arizona, USA during his time as CEO of M3 Metals Corp.

Mr. Allard is a geological engineer with 20 years’ experience in project and operations management for exploration mining, oil & gas and construction engineering. Mr. Allard has held various positions as VP operations in junior mining companies in Canada and Africa and has been managing a geophysical services company in Canada for the last 10 year.

Don Baxter is one of the premier graphite experts outside of China, having built one of only two producing graphite mines in North America. Don is presently Chief Executive Officer and Director of Applied Graphite Technologies. He is also a Director is Ceylon Graphite (TSXV:CYL).

Mr. McGuigan has 45 years international experience in economic geology and mineral exploration management, spanning grassroots exploration through to mine feasibility and mining operations. He has operated in West Africa, the Middle East, the SW Pacific, and North and South America.

Andrew Tims is a Registered Professional Geologist in Ontario and Manitoba and a Qualified Person under NI 43-101. He is an exploration geologist with more than 30 years of experience working throughout Manitoba, Ontario and Quebec, spending significant time the Kirkland Lake-Timmins, Red Lake gold camps plus the Wabigoon area of Northwest Ontario. He has worked for Major companies including Teck Resources and Hemlo Gold Mines in Hemlo gold camp, as well as junior exploration companies before joining Rainy River Resources, in 2006, as a senior exploration geologist until it was taken over by New Gold in 2013. Andrew was part of the exploration team that developed the Rainy River resource from 550 000 ounces of gold in 2005 to over six million when it was acquired by New Gold.

The information contained here is for information purposes only and is not to be construed as an offer or solicitation for the sale or purchase of securities. Readers should conduct their own research for all information publicly available concerning the company. Prior to making any investment decision, it is recommended that readers consult directly with Xander Resources and seek advice from a qualified investment advisor.