This Silver Dollar Resources profile is part of a paid investor education campaign.*

Eric Sprott is a billionaire investor who has committed a major portion of his investments to the mining industry. This amounts to around $200 to $300 million of his wealth. In 2019, Sprott announced that he prefers to invest in junior mining companies as opposed to major mining companies given their potential for making new discoveries and higher growth.

As investors seek entrance into the mining industry, they will likely find Mr. Sprott’s recent investments to be of particular interest given his successful track record. Coattail investing is an increasingly popular and simple investment strategy in which an investor mimics the investments of a renowned investor like Eric Sprott. 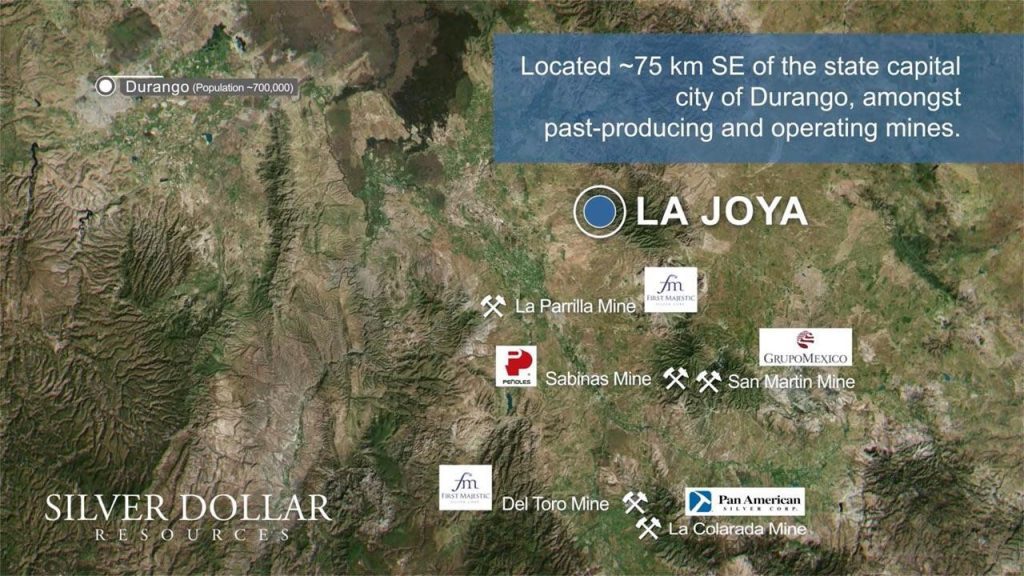 The company is led by an experienced management team with 100 years of collective experience in exploration, mining, and the capital markets. Also, Silver Dollar’s two technical advisors are past recipients of the PDAC Thayer Lindsley International Mineral Discoveries Award for discovering over a billion ounces of silver and 10 million ounces of gold in their careers.

Silver Dollar is fully funded to execute its 2021-2022 exploration plans with approximately $10 million in the treasury. The bulk of these funds stem from a financing closed last year with lead orders from Mr. Sprott and First Majestic Silver Corp. (TSX: FR, NYSE: AG, FSE: FMV), who is now also one of Silver Dollar’s largest shareholders with approximately 14% of shares issued. 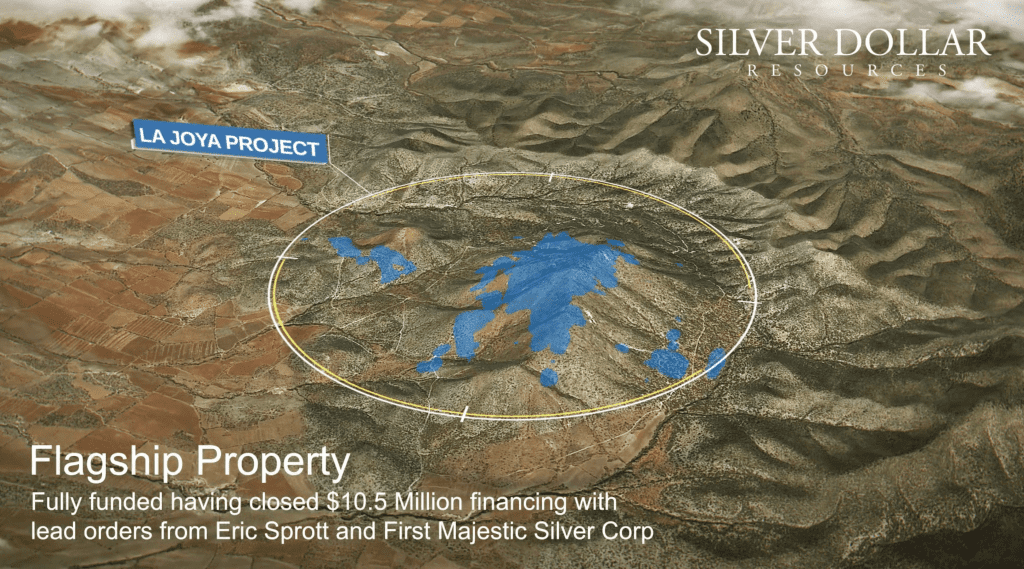 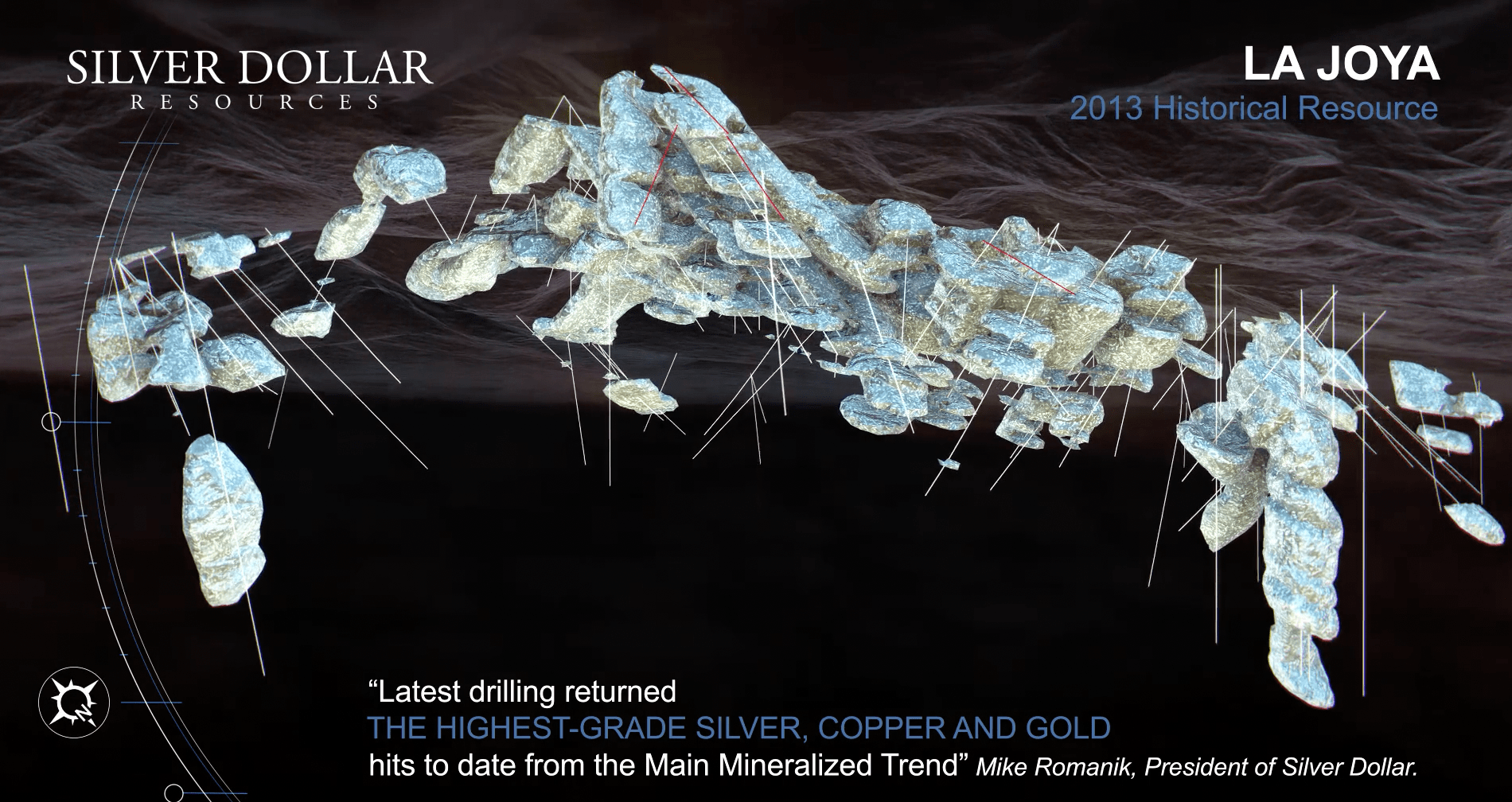 Silver Dollar signed a definitive agreement in August 2020 to acquire up to a 100% interest in the La Joya Silver Project from First Majestic Silver. Located in the heart of the Mexican Silver Belt in the mining-friendly state of Durango, La Joya is strategically positioned near past-producing and operating mines that include Grupo Mexico’s San Martin Mine, Industrias Penoles’ Sabinas Mine, Pan American Silver’s La Colorada Mine, and First Majestic’s La Parrilla and Del Toro Silver Mines.

La Joya is an advanced exploration and development stage project, where the latest drilling returned the highest-grade silver, copper, and gold grades to date from the Main Mineralized Trend. This included a two-metre intercept of 1,778 g/t of silver equivalent or 62.7 oz/t of silver equivalent.

Silver Dollar believes the project has excellent potential for resource expansion based on newly identified areas that could host additional high-grade mineralization. The company has already received a permit to restart exploration drilling for the first time in seven years and is currently preparing drill pads on the property.

First Majestic Silver acquired the La Joya property in 2015 as part of its acquisition of SilverCrest Mines Inc. A total of 182 historical drill holes, totalling ~51,600 metres (m), have been completed on the property to date. This includes 125 holes, totalling ~36,041 m, drilled by SilverCrest between 2010 and 2014. In 2012, a historical inferred mineral resource estimate for silver-copper-gold (Ag-Cu-Au) and for tungsten-molybdenum (W-Mo) mineralization was calculated from 78 SilverCrest drill holes (25,812.65 m) and 11 validated historical drill holes (4,272.63 m). Silver Dollar has not completed the necessary data verification and work required to update the historical mineral resource estimate and does not rely upon it as being current.

In February 2021, Silver Dollar reported the results of a compilation and reinterpretation of all historical exploration data on the La Joya project. The database studies were performed by mining engineers, Tetra Tech Inc. and included the following highlights:

Michael Romanik has over 15 years of resource exploration and public market experience with an emphasis on management, promotion, and corporate finance. He has built an impressive network of resource and investment industry contacts over the years and demonstrated a proven ability to utilize those relationships to advance Silver Dollar’s business objectives. Romanik has been the president and CEO of GoldON Resources (GLD-TSXV) since 2009.

Jeff Smulders is a semi-retired professional accountant experienced in financial management, taxation, and accounting. His career spans over 45 years including several years with a large accounting firm and 10 years with a major mining company. Smulders has managed his own financial consulting business for the last 25 years in which he assists and advises a wide variety of both private and public companies. Smulders is a director and CFO of GoldON Resources (GLD-TSXV).

Guillermo Lozano-Chávez is a Professional Geologist with over 40 years of experience. Previously, he was vice president of exploration for NYSE-listed First Majestic Silver, where he was responsible for all exploration in and around five operating mines. From 2002 to 2012, he was the director of exploration for Silver Standard Resources, where he managed their Mexican exploration and oversaw their Peruvian and Argentinian exploration activities. Lozano-Chávez has also managed his own consulting firm since 1990, having worked for several major and junior companies in Central and South America. Before that he worked for the Penoles Group as an exploration geologist and mine manager.

Perry Durning is an economic geologist who has been involved in mineral exploration for over 50 years. Durning has focused much of his career on grassroots exploration in pioneering areas. He graduated with a B.Sc. in Geology from San Diego State University and an M.Sc. in Economic Geology from the University of Arizona. Durning has worked extensively throughout the western United States, Mexico, and Central and South America. He worked for Amax Exploration, SAGE Associates, and Occidental Minerals before becoming exploration manager and the then-president of Fischer-Watt Gold Co.

An economic geologist who has been involved in mineral exploration for over 35 years, Bud has a proven record of discovery. He graduated from the University of California at Berkeley with a B.A. in Geology and from San Diego State University with an M.Sc. in Geology. Bud has conducted extensive exploration programs in the Western United States, Mexico, Honduras, and Costa Rica. He has worked with an array of clients including Kennecott, Meridian Gold, BHP, Mount Isa Mines, Hecla Mining, Crown Resources, Monarch Resources, Silver SSR Mining, Canplats Resources, and The Electrum Group.

The information contained here is for information purposes only and is not to be construed as an offer or solicitation for the sale or purchase of securities. Readers should conduct their own research for all information publicly available concerning the company. Prior to making any investment decision, it is recommended that readers consult directly with Silver Dollar Resources and seek advice from a qualified investment advisor.