Developing Polymetallic Precious and Base Metals Projects in British Columbia

This Rokmaster Resources profile is part of a paid investor education campaign.*

In December 2019, Rokmaster finalized the option to acquire 100 percent of the polymetallic Revel Ridge project, formerly known as the J&L Property, from Huakan International Mining Inc. Rokmaster has completed an updated mineral resource and technical report on the property for the Main and Hanging Wall zones. The NI 43-101 report includes an estimate of 1,134,000 measured and indicated gold equivalent ounces with 1,012,000 inferred gold equivalent ounces in the Main, Hanging Wall and Footwall zones. In April 2020 Rokmaster announced it had expanded the land package of Crown Grant Lots and Mineral Claims making up the Revel Ridge Project from 2,933 hectares to 5,115 hectares. The additional land package was obtained by acquiring two previously unavailable mineral claims that adjoin the original Revel Ridge property. The land claims were acquired for C$25,000 cash without any additional royalties or commitments.

Rokmaster began exploration on the Duncan Lake zinc project in July 2017 including soil sampling, prospecting, rock sampling and mapping a large 16-square kilometer area of the Duncan Anticline. During the summer 2018 exploration program, Rokmaster discovered a new zinc occurrence approximately 1.5 kilometers north of the No. 2 Zone and 7.5 kilometers south of the Jubilee Point drill target area. In the summer of 2019, Rokmaster returned to the Duncan Lake property to conduct another exploration program including additional geological mapping and sampling of the southern portion of the project.

Rokmaster’s management team of industry veterans is experienced in fast-tracking projects from discoveries through to commercial production. Veteran independent geologist Jim Oliver is also working with Rokmaster to aid in the company’s development projects. Oliver is a qualified person for the purpose of NI 43-101.

President and CEO John Mirko played an instrumental role in permitting, constructing and operating the MAX Mine in Trout Lake, BC, for which he was a recipient of the “E. A. Scholtz Medal for Excellence in Mine Development” from the Association for Mineral Exploration of British Columbia in 2008, and the “Mining and Sustainability Award” from the Mining Association of British Columbia in 2009.

Revel Ridge is a polymetallic gold-zinc-lead-silver property located in south-central British Columbia, 45 kilometers by road from Revelstoke. The property was optioned by Rokmaster Resources in December 2019.

In connection with Rokmaster’s submission to the TSX Venture, an updated mineral resource estimate was prepared on the Revel Ridge project for the Main Zone, Hanging Wall Zone, Footwall Zone and the Yellowjacket Zone. In April 2020 Rokmaster announced it had expanded the land package of Crown Grant Lots and Mineral Claims making up the Revel Ridge Project from 2,933 hectares to 5,115 hectares by acquiring two strategic mineral claims adjoining the eastern edge of the original property for C$25,000.

Due to the limited exploration of the Revel Ridge project, Rokmaster believes there is potential to continue to expand on historic resources, as only 1500 meters of the 3000-meter main zone has been drilled. Moving forward, Rokmaster intends to continue exploration on the property as it works towards updating a historical preliminary economic assessment (PEA) on the property. The updated PEA is expected to include data from the company’s new mineral resource estimate reported in 2019.

The Duncan Lake Project is located at the center of the Kootenay Arc. The area is responsible for more than 50 million tons of zinc-lead-silver ores mined from ten past-producing deposits including Grandview-Metaline, Reeves MacDonald, Jersey-Emerald, HB and Bluebell Mines, and Teck Resources’ Pend Oreille mine. Mineral exploration in the Duncan Lake region dates back to 1890.

Between 1957 and 1961 Teck conducted drilling, underground development and metallurgical studies on its historic Duncan Mine prospect, a 275-hectare claim group 2.5 kilometers south of Rokmaster’s discovery area. While the prospect never went into production, it does have a historically non-NI 43-101 compliant underground zinc-lead resource of 3.9 million tonnes at 3.3 percent zinc and 3.1 percent lead.

Rokmaster now owns Cominco’s high grade 1989 discovery zone, and intends to use Cominco’s expert recommendations to plan the drilling of its future exploration targets. With a favorable jurisdiction, year-round access and proximity to Teck’s smelter at Trail, Rokmaster believes the Duncan Lake project is well-positioned for development.

The Duncan Lake is complemented by nearby regional infrastructure including: 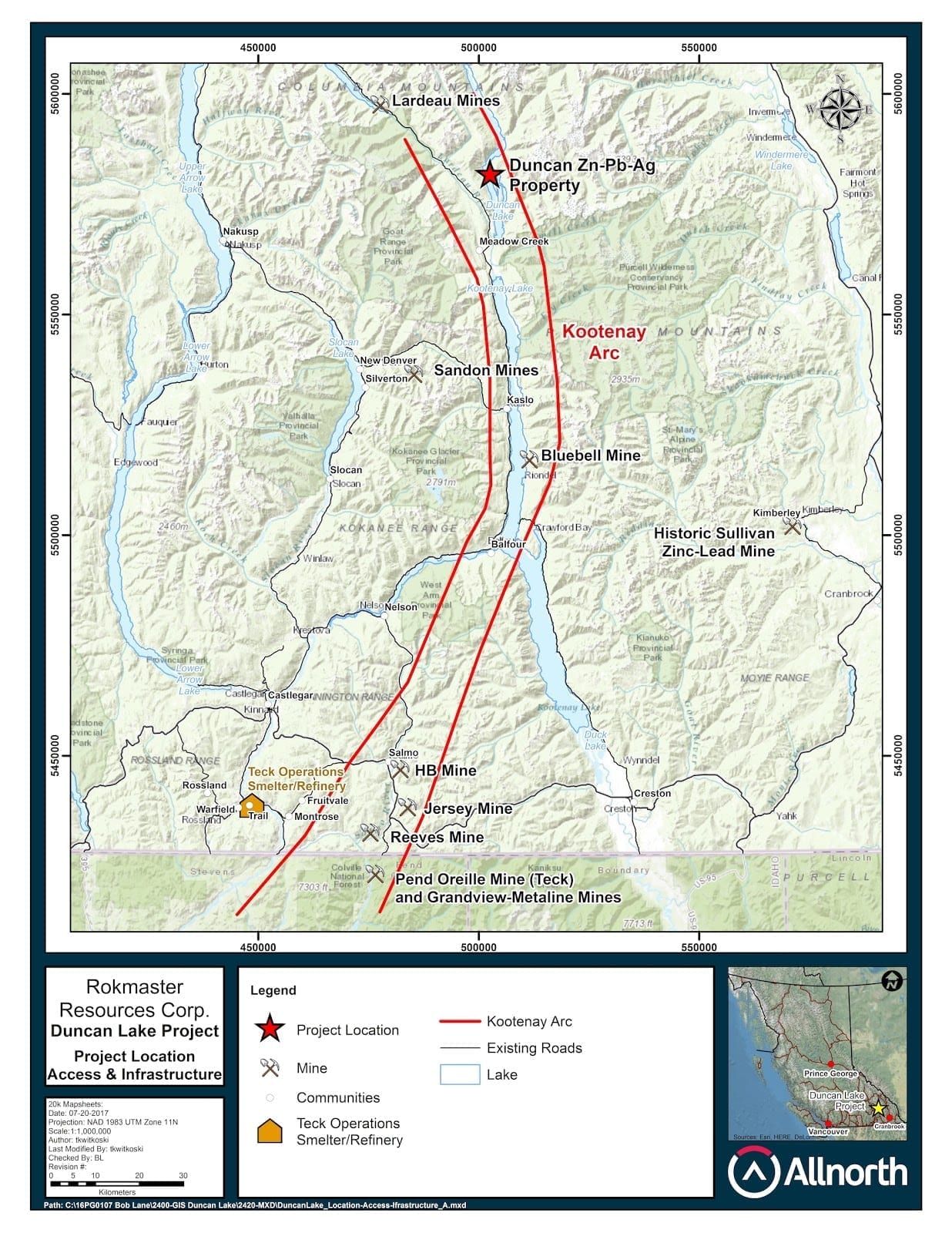 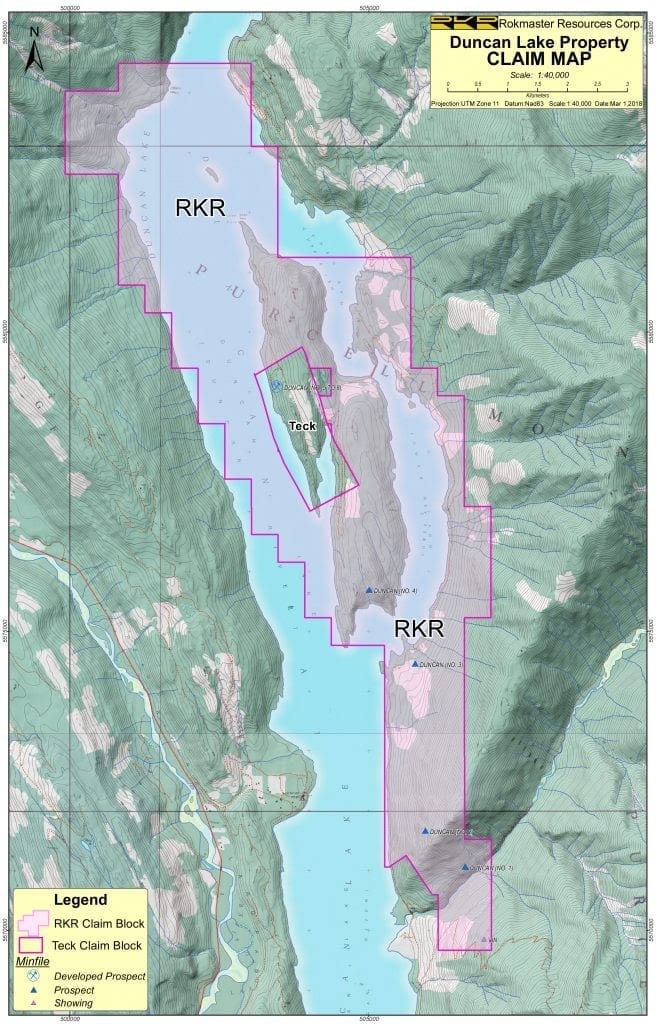 In mid-2017, Rokmaster acquired 3 additional claim blocks—two of which are located 7 kilometers on strike to the south of Duncan Lake and one claim block that adjoins the project. Following a review of the historical data on the claims, Rokmaster’s technical team has noted several zinc-lead occurrences similar in nature to those found on the Duncan Lake claims. Occurrences of copper-bearing rocks were also discovered by previous operators six kilometers southeast of the central portion of the project, including copper-bearing float assaying up to 5.9 percent copper, 12.3 grams silver and 107 ppm zinc. 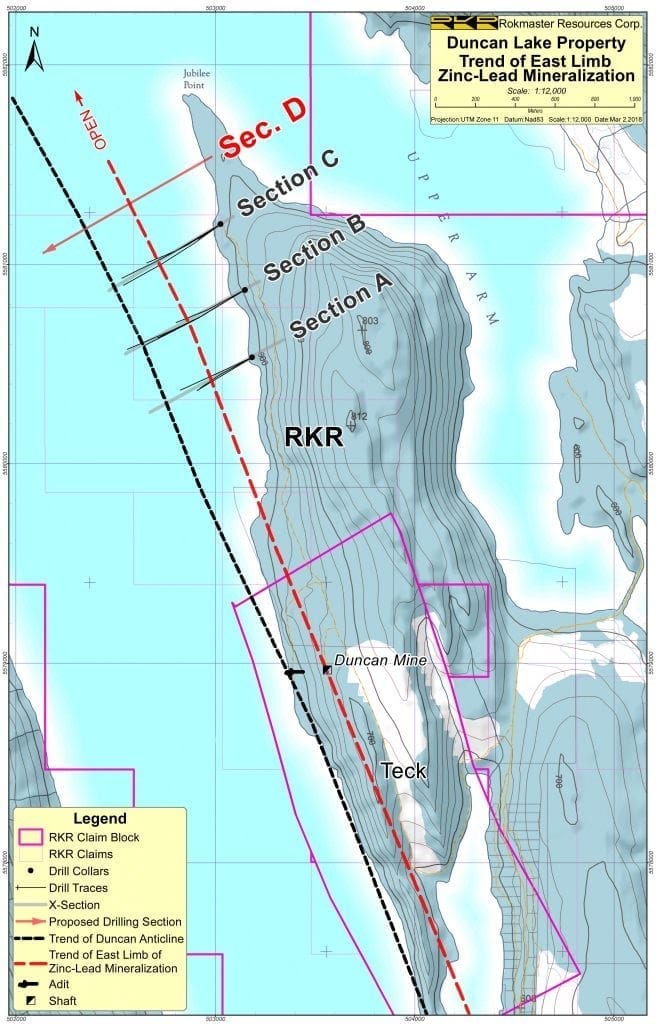 The company also fully acquired 11 mineral claims totaling 620 hectares south of and adjacent to its Duncan Lake Project. The new property forms part of the company’s Duncan South area which now covers over 12 kilometers of important southerly extensions of both limbs of the Duncan Anticline. Documented historical mineral occurrences located on the property include the No. 1, No. 2, No. 3 and VIN Zones. A persistent zone of zinc-lead mineralization up to three meters thick, 30 meters high and exposed for 90 meters along strike in an old adit is reported to average 6.36 percent zinc and 2.46 percent lead across 1.13 meters width over the entire length of the zone.

In the summer of 2019, Rokmaster returned to the Duncan Lake property to conduct another exploration program including additional geological mapping and sampling of the southern portion of the project. During Phase One of the company’s 2019 exploration Rokmaster collected 179 soil and 16 rock samples, along with data collection from 205 geological and stratigraphic observation points along a 10-kilometer-long mineralized trend.

Based on the initial results of Phase One and historical drilling on the property, Rokmaster believes the Duncan Lake North Zone is a strong target with the potential to intersect additional semi-conformable zinc-lead-silver mineralized zones moving forward.

Mr. Cowin has 20 years of investment experience. Since 2007, he has been a director of Northcape Capital (“Northcape”), a boutique investment fund based in Australia which manages over A$8.0 billion. Over that period he has been the portfolio manager/analyst for the Emerging Companies Fund. Prior to Northcape, Mr. Cowin was a senior portfolio manager at AMP from 2004-2007. From 2003-2004, he managed the Small Companies Fund at UBS and was an industrial analyst with sector responsibility for the basic industries, healthcare, media and diversified industries. While at UBS from 1999-2003, he also held the position of Head of Research and Deputy Portfolio Manager for the UBS Australian Share Fund. Between 1996-1999, he was a research analyst with BZW Equities. Mr. Cowin holds a Masters of Business Administration from the Australian Graduate School of Management and a Bachelor of Chemical Engineering (Honors) from the University of NSW.

Mr. Mirko has 40 years of extensive experience in the mining industry. His most recent work was with Roca Mines Inc. as a founding Director for nine years, where he was instrumental in putting into production a 500 tonne per day (TPD) mine and concentrator. He was co-recipient of Association for Mineral Exploration BC’s “E.A. Scholtz Medal” (2008) for excellence in mine development, and the Mining Association of BC’s “Mining and Sustainability Award” (2009) for Roca Mines’ MAX Molybdenum Mine.

Dr. Oliver has more than 38 years of mineral exploration experience specializing in global mineral deposit evaluations and early to advanced-stage project valuations, with particular emphasis on belt, regional and detailed geological mapping programs, lithologic, structural and alteration mapping, Archean (in Venezuela, Tanzania, Quebec and Ontario) and epithermal gold, porphyry copper-molybdenum gold, SedEx, VMS and Ree mineral systems worldwide. He served as Senior Geologist for Teck Resources from 1992-1995 and V.P. Geology for the Hunter Dickinson (HDI) Group of Companies, where he was instrumental in the successful acquisition of several mineral projects and deposits while providing leading-edge geoscience on a diverse range of deposit types. He has worked on 5 continents, in over 35 countries and examined or worked on approximately 400 mineral occurrences or deposits.

Mr. Rebagliati is a consulting geological engineer and has held positions with a number of major mining companies. He graduated from Michigan Technological University in 1969 with a B.Sc. in Geological Engineering. In 1986, Mark formed Rebagliati Geological Consulting Ltd. based in Vancouver, Canada.

As a mineral exploration consultant with a portfolio of ideas he developed an association with the Hunter Dickinson Group exploring for PGE in South Africa and Brazil and epithermal, massive sulphide and porphyry deposits in North and South America, the Pacific Islands and Asia.

Mr. Rebagliati is the recipient of several mining industry awards including the BC Chamber of Mines “H.H. Huestis Award” (1992) for excellence in mineral exploration, the “Bill Dennis Prospector of the Year Award” (1997) from PDAC (Prospectors and Developers Association of Canada), a co-recipient of the “Thayer Lindsey International Discovery Award” from PDAC (2007), the “Robert M. Dreyer Award” (2008) from the Society for Mining, Metallurgy & Exploration to recognize outstanding achievements in applied economic geology accomplished through commercial exploration or development of mineral deposits, and most recently the “Colin Spence Award” (2009) from the Association for Mineral Exploration BC for global exploration excellence.

Mr. Muraro has dedicated over 40 years to the mineral exploration industry, and spent over 30 years at Cominco Ltd. as Chief Geologist and internal Consulting Geologist to the Exploration Division. Mr. Muraro holds a B.Ap.Sc. In Geological Engineering from the University of British Columbia, a M.Sc. In Geological Engineering from Queens University, and completed post graduate studies at Stanford University. He serves as a Director of Imperial Metals Corp.

Mr. Tremblay is the founder and President of Hy-Tech Drilling Ltd. based in Smithers, BC. A northerner all his life, Mr. Tremblay grew up in Kitimat and eventually moved to Smithers in 1977 to raise his family.

Mr. Tremblay is active in the community as a sponsor, volunteer and mentor. He is currently a Director of the Canadian Diamond Drilling Association (CDDA) and is a strong believer in developing and fostering a culture of safety and environmental awareness. He received the “David Barr Award” (2010) for leadership and innovation in mineral exploration, health and safety from the Association for Mineral Exploration B.C.

Mr. Pankratz is currently a professor of Business Economics and Strategy at the University of British Columbia-Sauder School of Business. He brings experience and expertise ranging from 7 years of financial services management to leading a federal election campaign. He is multilingual in French, Spanish, German, and English.

Mr. Cojuco is a graduate of the University of British Columbia (BSc. Chemistry and Diploma in Accounting) and is a Chartered Accountant in British Columbia. Mr. Cojuco articled with PricewaterhouseCoopers LLP from 2006 to 2009 and with Staley, Okada and Partners from 2004 until the two firms combined in 2006. Mr. Cojuco worked primarily in the mining practice of both firms where he assisted clients in the areas of public financings, mergers and acquisitions, public company reporting and various other areas. Since the fall of 2009, he has been working in senior accounting capacities with junior mining companies, both in the production and exploration stage.

The information contained here is for information purposes only and is not to be construed as an offer or solicitation for the sale or purchase of securities. Readers should conduct their own research for all information publicly available concerning the company. Prior to making any investment decision, it is recommended that readers consult directly with Rokmaster Resources and seek advice from a qualified investment advisor.