This Pan Global Resources profile is part of a paid investor education campaign.*

Pan Global’s land package in the Iberian Pyrite Belt totals approximately 5,760 hectares and lies directly adjacent to the Aznalcollar (>70 million tonnes) and Los Frailes (>90 million tonnes) deposits. The Escacena project is also located only 12 kilometers from the active Cobre Las Cruces mine (42 million tonnes at 2.95% copper) which has been mining grades of more than 5% copper in the open pit.  Pan Global is currently focusing on two targets at Escacena, the La Romana massive sulfide copper deposit and the Cañada Honda gravity anomaly.  Recent drill results at the La Romana target have returned high multi-metal (copper, tin, silver, zinc) grades from near surface with every hole hitting mineralization indicating the potential for a large size deposit. Escacena’s exceptional land position, great infrastructure and multiple large untested targets make it an exciting prospect for the company. 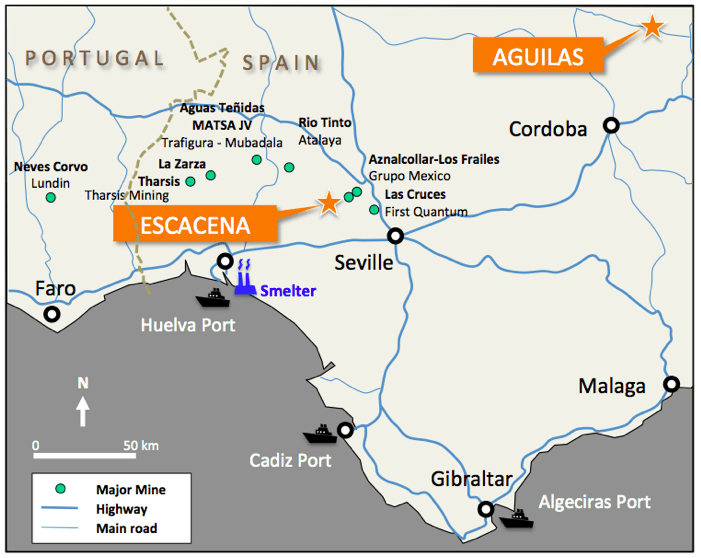 Pan Global has been exploring the Aguilas project since 2017 which comprises more than 16,000 hectares in northern Andalucia, Spain.  The Aguilas project contains several major faults and breccia structures with indications of hematite-dominant iron oxide copper-gold (IOCG) and polymetalic lead-zinc-silver mineralization.

Pan Global Resources began its initial exploration of the Escacena project in early 2019, including gravity, induced polarity (IP) and geochemical surveys. The results of this initial exploration work confirmed the La Romana and Cañada Honda gravity targets, allowing the company to move forward with drilling. 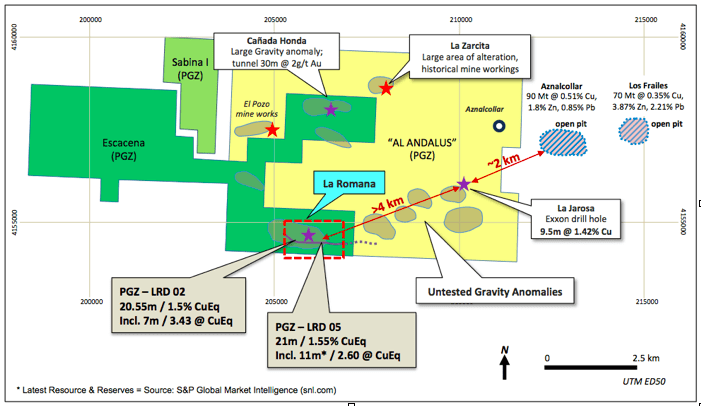 Pan Global continued its exploration of Escacena in 2020 including geochemistry and geophysics designed to identify new targets on the property. The second phase of drilling commenced in February and included the first step out drill holes at the La Romana copper target. The new drill holes intersected copper mineralization over wide intervals and showed the mineralization extends from near surface over several hundred meters of strike and shows copper in several layers open in most directions.  Pan Global’s own geophysics results and historical geophysics by Exxon indicate a potential for the copper mineralization to continue more than 2 kilometres along strike.

Pan Global Resources extended its holdings at the Escacena project through the acquisition of the rights to the “Al Andalus” property investigation permit and completed the acquisition of the property in early 2020.  Al Andalus is located adjacent to the company’s initial holdings at Escacena and includes potential eastern extensions to the company’s La Romana prospect and several large untested gravity anomalies.  The property comes to within 600 meters of the edge of the Aznalcollar open pit and also includes both the historical mining areas of the El Pozo and La Zarcita, and the La Jarosa target where a historical drill hole by Exxon in the mid-1980’s returned 9.5 meters at 1.42 percent. Exploration will commence on the Al Andalus property as soon as permitted.

The Aguilas project comprises nine investigation permits covering a total of 16,300 hectares in northern Andalucia, Spain. The main targets on the property are major cross-cutting fault zones in the Pedroches Batholith, including the Torrubia and Zumanjo trends. The project hosts IOCG-style copper mineralization along the Torrubia copper trend, which was drilled by the company in 2019 and confirmed wide zones of breccia over several kilometers of strike length.  Drill holes on the Zumajo trend targeted high grade polymetallic (lead, zinc, silver and lesser copper and gold) vein or breccia mineralization. Several shallow historical mine shafts and ancient workings occur along both trends.

For over 30 years, Mr. Evans has enjoyed an exemplary career as a mining executive holding multiple senior management positions in the industry. Of note are CEO of Dominion Diamond Mines and Norsemont Mining and Vice President of Placer Dome Inc. He has extensive M&A experience and has helped a number of public mining companies discover and develop base metals, precious metals, and diamond mining projects on four continents. Mr. Evans is a graduate of the University of Cape Town and served as Consul-General of South Africa to Canada.

Mr. Moody has over 30 years of experience in the mining industry including mineral exploration, resource assessment, business development and strategy. He spent 24 of those years with Rio Tinto, where he held the posts of Exploration Director, Vice President and Director of Business Development. Mr. Moody has a Bachelor of Science in Geology and Geophysics (Honours) from the University of New England. He is a graduate of the Senior Leadership Program from the London Business School, a graduate of the Business Leadership Development Program from the Australian Graduate School of Management and a Fellow of the Society of Economic Geologists.

Mr. Kerzner has over 25 years of experience as a successful entrepreneur in the retail and real estate industries. He is the founder and President of Rocky Mountain Chocolate Factory Canada Inc. and he established several private companies that have completed extensive residential and commercial developments throughout North America.  Mr. Kerzner has been broadly involved in providing seed capital for many successful public and private companies in the resource, environmental, and technology sectors. Mr. Kerzner is a graduate of the University of Toronto Bachelor of Commerce (Honours) program.  He is a member of the British Columbia’s Children’s Hospital Circle of Care and is actively involved in many other charitable organizations.

Mr. Downey brings over 25 years of international experience in the resource industry and he is currently President and CEO of Orezone.   His past senior positions include President and CEO of Aura Minerals Inc. and Viceroy Exploration Ltd. before its acquisition by Yamana Gold Inc. in 2006 for $600 million. He also negotiated the successful merger of Consolidated Trillion Resources Ltd and Oliver Gold Corporation that became Canico Resource Corp, which was purchased by CVRD in 2006 for over $800 million.  Mr. Downey holds a BSc (Honours) degree in Engineering from Queens University in Belfast, Ireland.

As a Chartered Professional Accountant and partner at PricewaterhouseCoopers, Mr. Parsons spent 34 years heading up the firm’s global mining practice.  He has advised governments around the world on mineral policy matters and has served on the boards of the PDAC, Indonesian Mining Association, Canada Indonesia Chamber of Commerce, World Mines Ministries Forum, Canadian Minerals Industry Federation, Advisory Council of the Centre for Resource Studies at Queens University, and the Professional Advisory Board of the Government of Canada’s Petroleum Monitoring Agency.  In 2005, the PDAC presented Mr. Parsons with their Distinguished Services Award, and in 2013 the Government of Canada awarded him the Queen Elizabeth II Diamond Jubilee Medal for his contribution to Canada’s mining industry. Mr. Parsons is a graduate of McGill University (B.Com).

The information contained here is for information purposes only and is not to be construed as an offer or solicitation for the sale or purchase of securities. Readers should conduct their own research for all information publicly available concerning the company. Prior to making any investment decision, it is recommended that readers consult directly with Pan Global Resources and seek advice from a qualified investment advisor.