Gold Exploration in the Prolific Canadian Jurisdictions of Quebec and Newfoundland

This Opawica Explorations profile is part of a paid investor education campaign.*

Sprott's investments may be of particular interest to investors considering the coattail investing strategy—this refers to mimicking the trades of well-known and historically successful investors to metaphorically 'ride the coattails' of respected investors in the hopes of realizing returns.

One company that Sprott has invested in recently is Opawica Explorations (TSXV:OPW) (FSE:A2PEAD) (OTC:OPWEF), a Canadian junior mineral exploration and development company focused on Quebec and Newfoundland. The company is backed by a management team with decades of experience and success in the mining industry and lead investors GoldSpot Discoveries (TSXV:SPOT,OTCQX:SPOFF) and Eric Sprott. 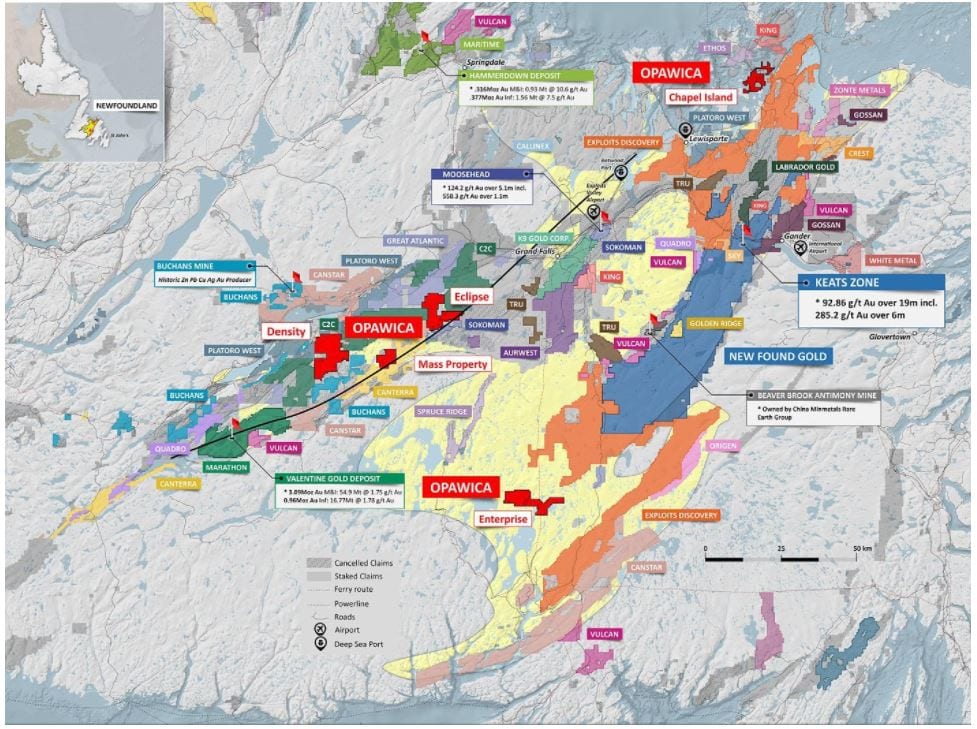 Opawica Explorations has strategically located projects near high-yielding mines in the gold-rich and mining-friendly Rouyn-Noranda camp in the Abitibi gold belt in Quebec and the Rogerson structural gold corridor in Newfoundland. The Abitibi gold belt is the world's largest mineral-rich greenstone geological belt and hosts more than 170 million ounces of produced gold while the Rogerson structural gold corridor is well-endowed in gold deposits and showings.

The company has three early-stage projects including Arrowhead, Bazooka and McWatters which have shown promising drill and sample results for significant high-grade gold mineralization. Opawica Explorations may have the potential to replicate the success of several high-yielding nearby mines including Agnico Eagle's Mouska, Yamana Gold's Wasamac and Yourbeau Resources Astoria. 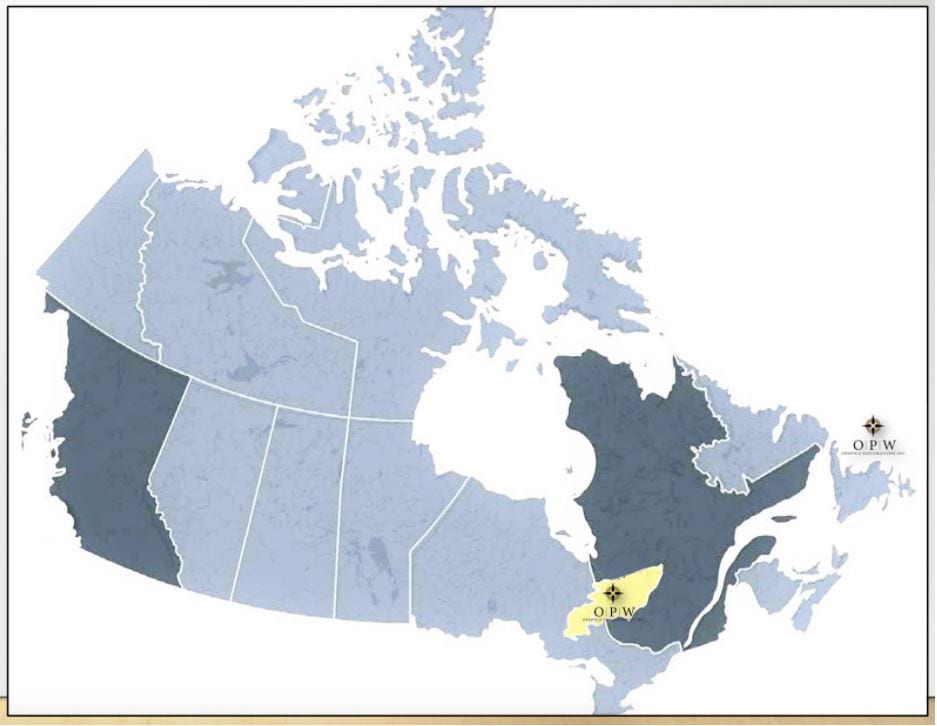 The company is fully funded, having recently raised C$5.3 million in June 2021 through non-brokered private placement despite only seeking to raise C$4 million. As a result of this successful funding round, the company is fully equipped to extend drilling programs without financial constraints.

Opawica Explorations recently signed a service agreement with GoldSpot Discoveries Corp. to assist in the exploration of its projects. The strategic partnership will maximize the chances of mineral discovery through the use of GoldSpot's proprietary technology and geoscience expertise. GoldSpot Discoveries has been granted a 0.5 percent NSR royalty on the Bazooka project and multiple royalty options on various projects.

Opawica Explorations is currently in the process of gaining permits in Quebec and prospecting the Newfoundland property. The company plans to begin drilling no later than October 2021 after sufficient geological assessments are completed on its properties. 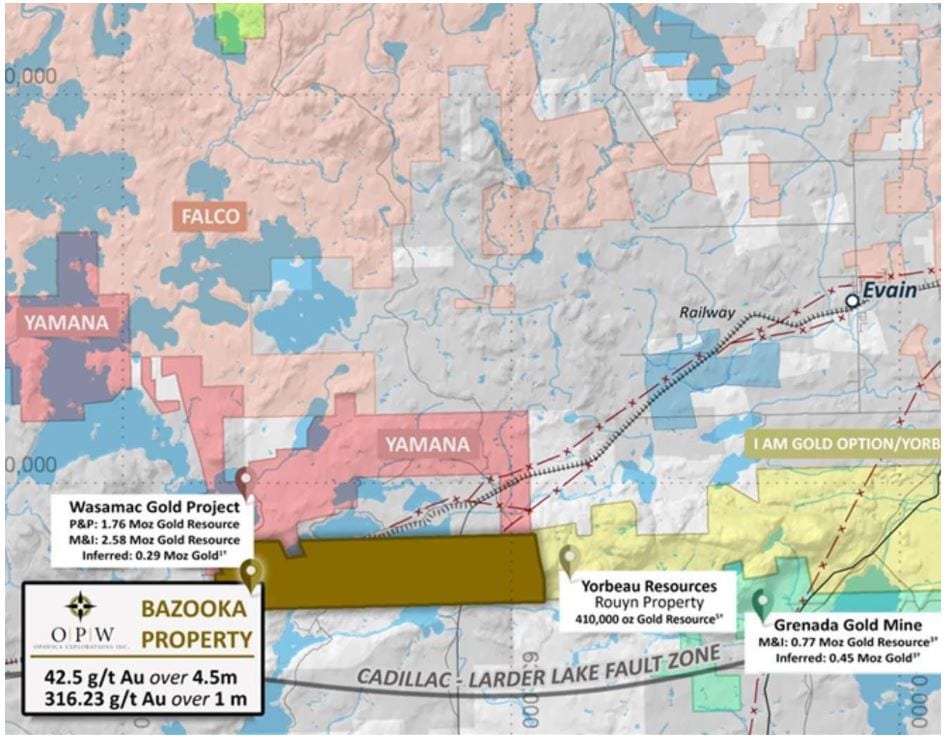 The Bazooka project is located in the high-grade gold region of the Abitibi gold belt in Quebec on the Cadillac Larder Lake Break. The property spans 1200 hectares including seven kilometres of strike length. The project is contiguous to the south-western border of Yamana Gold's Wasamac gold property that has proven and probable mineral reserves of 1.8 million ounces of gold at 2.56 g/t. Additionally, the Bazooka property is directly west of the IAMGOLD Corporation option which has produced high grades in the past.

From 2003 to 2005, drilling on the Bazooka property yielded widespread gold mineralization from a few hundred ppb to as high as 316.23 g/t of gold over 1.0 m in a singular hole. In 2017, drilling and historical holes confirmed a wide gold zone extending from the west to east at 275 m deep.

The property is believed to host higher-grade gold and will be operated on in three phases. The first phase will consist of a review of drill cores to establish a more consistent lithological code. The second phase will consist of drilling to obtain additional results in the central part of the high-grade gold zone associated with the four mineralized gold zones outlined by previous workings. Lastly, the third phase will conduct a resource estimate, metallurgical testing and preparation of the resource estimate report.

The Arrowhead project is also located in the high-grade gold region of the Abitibi gold belt in Quebec. The property is fully surrounded by Agnico Eagle Mines Ltd. which recently conducted a significant drilling campaign to the west and north of Arrowhead. 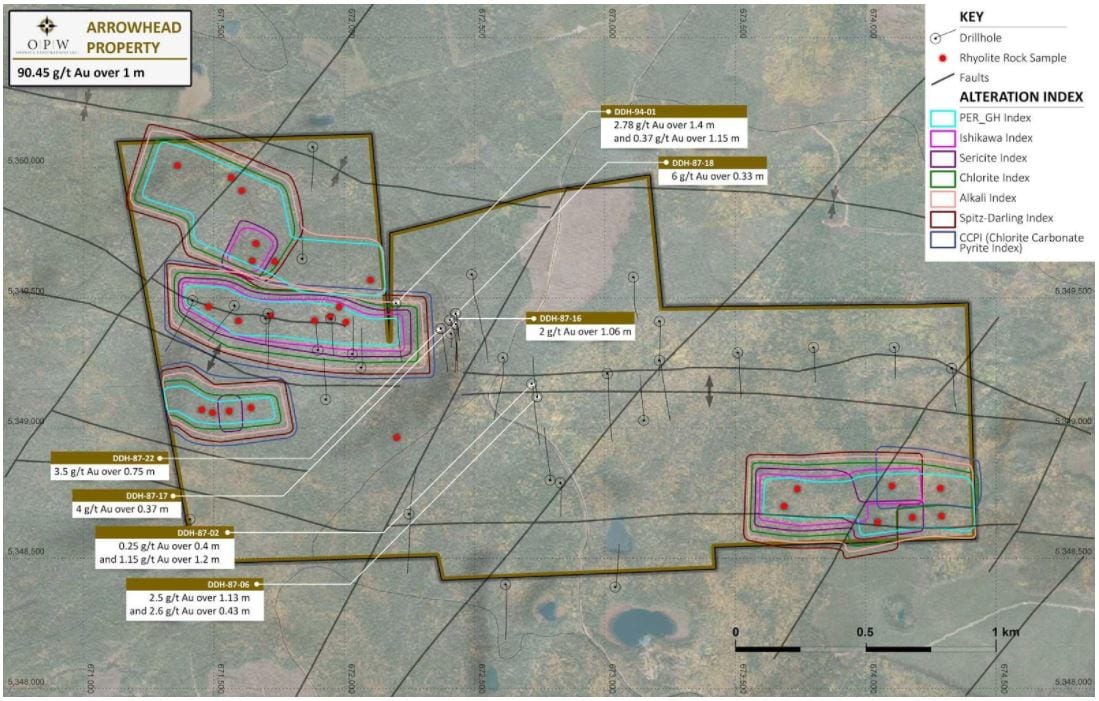 The Arrowhead project has a history of exploration and drilling work which includes 34.29 g/t of gold sampled in 1929. Previous drill holes on the property intercepted 40 gold-copper mineralized zones, enhancing the potential for quartz-carbonate auriferous veins associated with E-V trending on the shear zone, gold-rich VMS deposits and gold-rich polymetallic veins. Fine visible gold was seen throughout the historical drilling and on the surface including 4000 ppb of gold at 0.37 m depth.

The property is believed to host new mineralized veins as a result of previous exploration work that was conducted but the economic potential has not yet been proven.

The MacWatters project is located in the Abitibi gold belt region of Quebec. The project is continuous to the Long Bars Zone Break, the Yourbeau Rouyn property and the Granada Gold property that contains a gold resource of 2.3 million ounces. The project is associated with quartz veins in deformation zones. 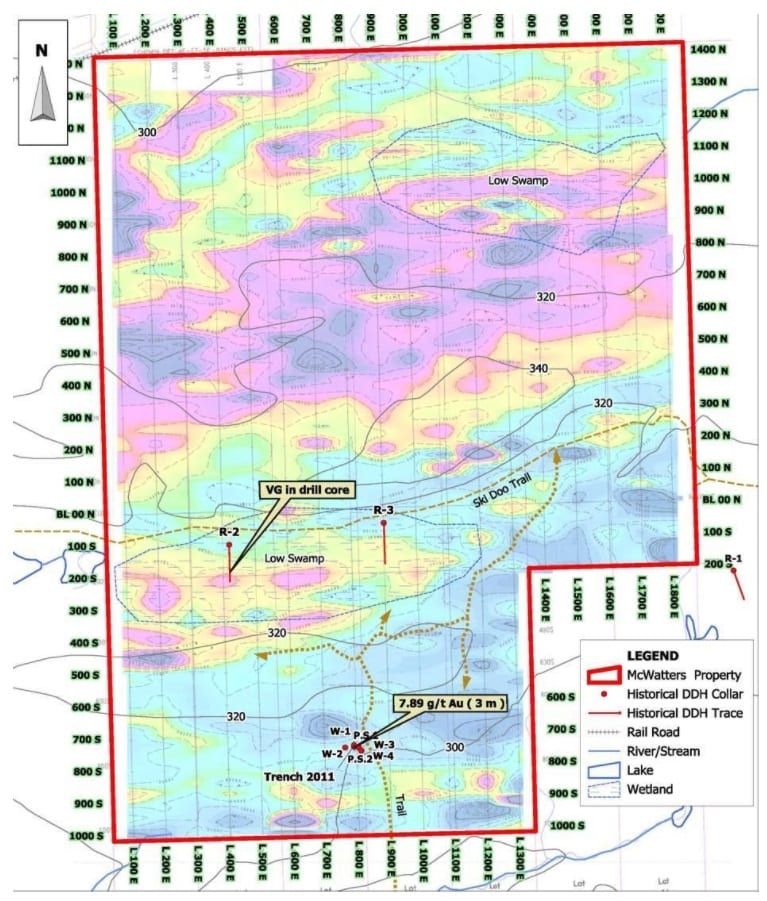 The property has a limited exploration history including an MMI survey, walking IP and soil sampling. Several gold showings have been identified both within and in the surrounding area including visible gold reported. Historical drill results done by Opawica Explorations include 7.79 g/t of gold over 3 metres.

The property is believed to host significant gold opportunities for the company.

Blake Morgan has 15 years of experience in the mining industry including 10 years dedicated to the mining and natural resource sector in Australia working with Rio Tinto, BMA Metals (a subsidiary of BHP) and Santos Ltd. Gaining first-hand knowledge, culture and an understanding of mining operations, Morgan then made the move from Australia to Canada and has been instrumental in consolidating significant exploration land packages and financing their development for private resource exploration companies in British Columbia.

Sandra Wong is a Chartered Professional Accountant with over 10 years of working experience with several TSX Venture Exchange- and Canadian Securities Exchange-listed companies in the area of financial reporting and company management.

Chris Reynolds has been investing in the natural resource sector for over 10 years. Delivering solutions for corporate structure, strategy and communications for small-cap juniors, Reynolds was an instrumental part in the incubation of Lithium Consolidated Mineral Exploration which went public on the ASX in 2017. He started his career at Longview Capital Partners in corporate development, then worked as an investment advisor at Mackie Research. He is currently the Founder of Progenitor Metals Corp.

Owen King has 20 years of experience in the financial markets and management consulting fields. King was employed at Mackie Research as an investment advisor focusing on venture capital financings. Since 2014, King has been working with public companies in business development and assisting with capital raises and IPOs. Before this, King was a management consultant working in the high-tech industry installing auditable quality management systems in small businesses.

The information contained here is for information purposes only and is not to be construed as an offer or solicitation for the sale or purchase of securities. Readers should conduct their own research for all information publicly available concerning the company. Prior to making any investment decision, it is recommended that readers consult directly with Opawica Explorations and seek advice from a qualified investment advisor.

The information contained here is for information purposes only and is not to be construed as an offer or solicitation for the sale or purchase of securities. Readers should conduct their own research for all information publicly available concerning the company. Prior to making any investment decision, it is recommended that readers consult directly with Opawica Explorations and seek advice from a qualified investment advisor.