Foran Mining Corporation (TSXV:FOM) is a Canadian exploration and development company with copper and zinc projects in the Hanson Lake volcanogenic massive sulfide (VMS) camp in mining-friendly Saskatchewan. According to the Fraser Institute’s Annual Survey of Mining 2018, Saskatchewan was named the top mining jurisdiction in Canada and third globally. An emerging copper-zinc base metal district, the Hanson Lake area displays similar geological characteristics as those found in the better-known Flin Flon and Snow Lake regions. Mining operations have occurred in and around Flin Flon for over 100 years. 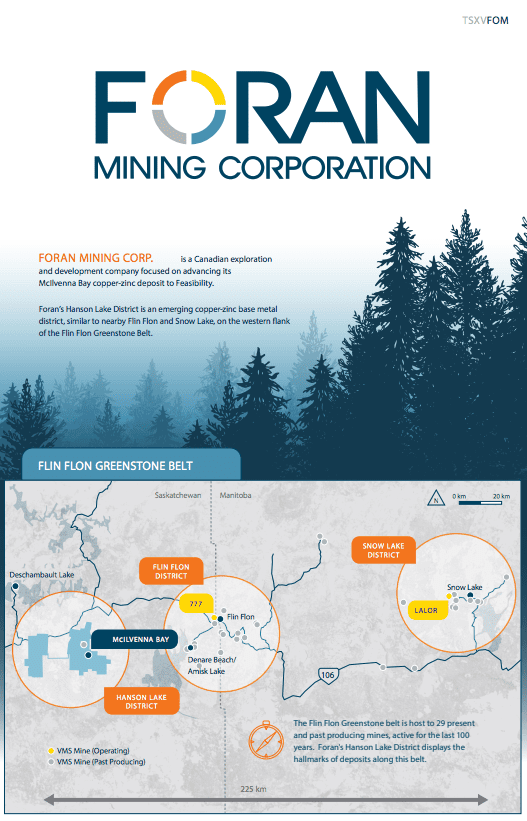 Foran is well-positioned to address an increase in copper and zinc demand along with a shortage of their supply. Copper and zinc have experienced increased demand from the rapidly growing automobile and electronics industries. These base metals are both anti-corrosive, which makes them ideal for a variety of materials, such as electrical wiring and galvanizing, useful in electric vehicles, renewable energy sources and related infrastructure necessary to meet our low-carbon future. Along with an increase in their uses, the copper and zinc supplies are currently strained due in part to production issues in top metal-producing jurisdictions in China and Indonesia. The high demand and constrained foreign supply places the Canadian market at an advantage.

Zinc’s depleted supply is in part due to China’s green initiatives and a crackdown on mining practices in 2006. In August 2017, eight Chinese provinces were shut down or suspended and more than 11 percent of China’s mined zinc output was lost. China’s zinc production dropped 4.6 percent in 2018 as smelters experienced longer maintenance periods. Meanwhile, the copper supply chain is also facing challenges as Freeport-McMoRan Inc. (NYSE:FCX) recently announced that production at its Indonesian Grasberg mine would be more than halved next year as it transitions to underground operations. This is expected to cut approximately 300,000 tonnes from the world’s supply, potentially speeding up an expected deficit.

Foran’s land holdings also include Target A, a deep EM conductor located two kilometers southeast of McIlvenna Bay and the Balsam claims, which are host to the Thunder Zone, a new VMS discovery from 2013. In addition, the Hanson Lake property has a number of potential exploration targets that require further work.

Major shareholder Pierre Lassonde, chairman of Franco-Nevada, holds 11.8 percent of Foran’s shares. Lassonde has held various roles in senior management for companies such as Newmont Goldcorp (NYSE:NEM,TSX:NGT), Euro-Nevada Mining Corporation Ltd. and New Gold Inc. (TSX:NGD). He has also been inducted into the Canadian Mining Hall of Fame in 2013. In addition to Lassonde’s stake in the company, Foran’s management team notably holds 17 percent of the company’s shares.