Emgold Mining Corporation (TSXV:EMR,OTC Pink:EGMCF,FWB:EMLM) is a junior gold and base metal exploration company focused on advancing its projects in Nevada and Quebec. Nevada is the number one mining jurisdiction in the world according to the Fraser Institute, which also ranked Quebec fourth worldwide. Emgold has developed a pipeline of early-stage to advanced-stage projects including six located in Nevada and one in Quebec.

Each of Emgold’s properties has been developed through the company’s three-step business model. First, the company makes strategic acquisitions of quality assets that are close to existing mines or advanced-stage projects, have a discounted acquisition costs, have locational or geologic synergies and/or are easily accessible to minimize exploration costs. Second, Emgold creates value by reinterpreting and computerizing historical data and by using modern exploration techniques, such as geophysics, to advance its projects. Finally, the company does monetization of its assets through sale, joint venture, option or royalty transactions with the goal of maximizing shareholder value. Using a baseball analogy, the company is looking for singles, doubles, triples and home runs by creating multiple opportunities and maximizing the potential for success. 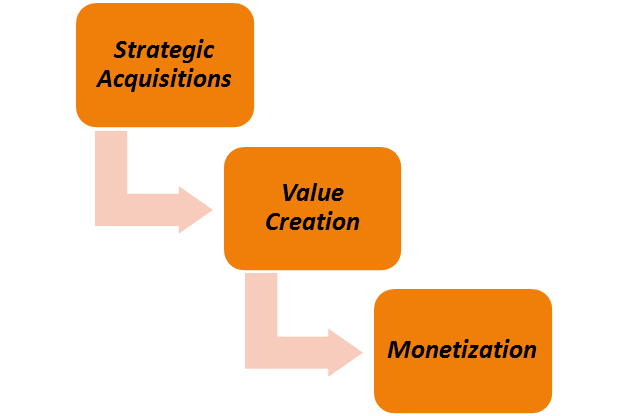 Emgold’s management team successfully implemented this model in the past. In June 2018, for example, the company optioned the 11,300-hectare Troilus North property and quickly moved to acquire a 100 percent interest. After releasing an updated technical report and conducting exploration, the company quickly sold it to Troilus Gold (TSX:TLG) in December 2018 for cash and 3.75 million TLG shares. Troilus Gold is advancing the adjacent past-producing Troilus mine, which hosts an exploration target of over five million ounces of gold. Through the transaction, Emgold obtained a significant share position in Troilus Gold and the opportunity to participate in the advancement of the Troilus mine through its share position.

In Nevada, Emgold first acquired the advanced-stage Golden Arrow project in late 2018. It is a 7,050-acre property that hosts a measured and indicated resource of 12.2 million tons grading 0.024 oz/t gold and 0.33 oz/t silver, representing 296,500 ounces of gold and 4 million ounces of silver. It has a completed Plan of Operations and Environmental Assessment that allows a major drilling program for resource definition and generation. Emgold intends to review its extensive historical database on the property, conduct exploration, complete internal scoping studies, and potentially move forward with a preliminary economic assessment (PEA) on the property.

In March 2020 Emgold finalized the acquisition of 21 patented and 60 unpatented mineral claims that make up the core of the New York Canyon property. The property was previously owned by Searchlight Resources. New York Canyon hosts copper oxide skarn mineralization and copper porphyry sulfide mineralization in three known deposits: Longshot Ridge, Copper Queen and Champion. The property is adjacent to the past-producing Santa Fe gold mine and may also host epithermal gold and silver mineralization. A technical report was completed on the Longshot Ridge deposit by Searchlight Resources Inc. in 2010 and the report included a resource estimate for the Longshot Ridge deposit.

During the process of the acquisition, Emgold announced it had signed an Earn-In with Option to Joint Venture Agreement with Kennecott Exploration Company, a subsidiary of Rio Tinto (ASX:RIO,LSE:RIO,NYSE:RIO), for the property. Kennecott has the option to earn up to a 75 percent interest in the property by completing US$22.5 million in exploration expenses.

Emgold is also in the process of acquiring the advanced-staged Mindora property. The property comes with 43,000 feet of historic drilling and is located 12 miles from the New York Canyon property. The property was drilled in the 1980s and 1990s as previous operators looked for a deposit with similar potential to the nearby Santa Fe mine. Four epithermal exploration targets have been identified by historic drilling as well as a potentially deeper porphyry system.

In 2018 and 2019, RMC completed a Plan of Operations and Environmental Assessment to expand its operations, which include a major drilling program at Buckskin Rawhide East, scheduled to start in 2020. If successful, any resource identified on Buckskin Rawhide East could be mined at the Rawhide mine, creating a royalty opportunity for Emgold. Buckskin Rawhide West and Koegel Rawhide are other nearby strategic properties held by Emgold with geologic synergy to Rawhide mine. In Quebec, Emgold is advancing the early-staged Casa South property. The project is south of and abuts Hecla Mining Corporation’s (NYSE:HL) Casa Berardi mine. The mine has produced approximately 2 million ounces of gold since it commenced production in 1988. Hecla reported that the mine produced over 160,000 ounces of gold in 2018. Emgold has recently completed a 3,000-meter drill program at Casa South on targets along the Kama trend, a significant seven-kilometer-long and two-kilometer-wide gold-bearing structure. To date, two other major targets have been identified on the property for testing. In Quebec’s Val d’Or mining camp, Emgold has the option to earn up to a 55 percent interest in Knick Exploration Inc.’s (TSXV:KNX) East-West property.