This Canstar Resources profile is part of a paid investor education campaign.*

Newfoundland is becoming known for more than just beautiful scenery, ocean-fresh seafood and its strategic importance in defense, transportation and communications as Canada’s easternmost province. Hundreds of millions of years ago, the area where Newfoundland is now located was host to crustal-scale tectonic activity that primed the geological terrain for orogenic style, high-grade gold mineralization.

Compared to other gold belts in Canada, Newfoundland had been relatively underexplored due to a lack of understanding of the controls on high grade gold mineralization.

In recent years, however, this has changed. With the recognition of high-grade gold mineralization along major fault structures identified in other companies’ recent drill programs, Newfoundland is becoming one of the world’s most exciting areas for new gold discoveries. With excellent infrastructure, good road access, and a skilled workforce in a safe jurisdiction with straightforward permitting processes, Newfoundland is experiencing revitalized interest in gold exploration and mining.

Canstar Resources (TSXV:ROX,OTCQB:CSRNF) is a Canadian exploration company with two district-scale mineral exploration projects on the island of Newfoundland. The resurgence of gold exploration in the province and a company market cap of approximately C$21 million primes Canstar for tremendous upside potential for investors based on its district scale property holdings in Newfoundland.

In September 2020, Canstar Resources partnered with mining heavyweight Altius Minerals (TSX:ALS,OTCQX:ATUSF) on an option agreement to acquire 100 percent interest in 61,150 hectares of Golden Baie claims. Altius is a half-billion-dollar base metals royalty company with extensive project generation experience in Newfoundland, so this strategic relationship gives Canstar access to Altius’ technical team and adds a lot of market credibility.

With over 20 high-grade gold occurrences along 30 kilometers of strike on the company’s 620 km2 Golden Baie property, Canstar has the potential of soon mimicking the exploration successes of New Found Gold Corp (TSXV:NFG), which is in the same gold belt and currently has a market cap of C$550 million.  In 2019, New Found Gold reported drill results that included 92.9 g/t gold over 19 meters in a geological setting that is very similar to that found at Golden Baie. 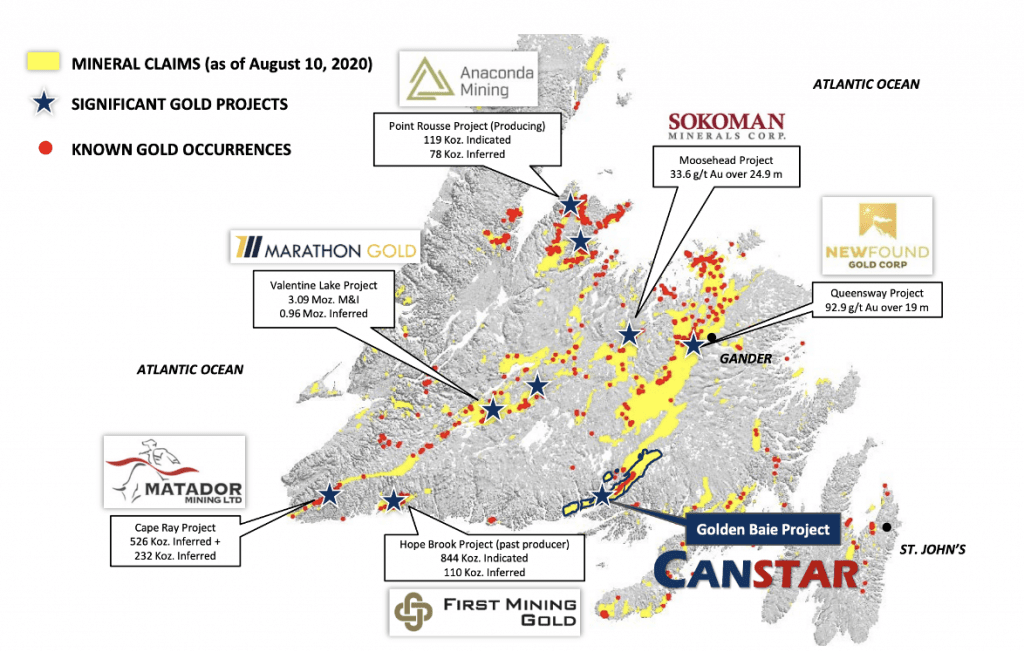 Canstar’s primary focus is on its flagship Golden Baie gold project situated in southcentral Newfoundland. With very limited historical drilling on the massive claim package, Canstar has an abundance of opportunity to make new discoveries at Golden Baie. This project has already shown notable visible gold occurrences, including one grab sample that assayed 4,485 grams per tonne (g/t) gold. In addition, the company owns the Buchans-Mary March and Daniel’s Harbour projects in Newfoundland, which both demonstrate the potential for high-grade base metal and precious metal mineralization in the vicinity of historical high-grade mines.

Canstar has likened the Golden Baie property’s geological structure and style of gold mineralization to other world-class orogenic gold deposits, such as Kirkland Lake Gold’s Fosterville deposit in Australia. In both cases, visible gold is found as disseminated fine specks within quartz veins and spatially associated with antimony mineralization in the form of stibnite. However, such visible gold mineralization has been found at surface on the Golden Baie project while it was not found until a depth of 800 meters at Fosterville.

Less than 10,000 meters of drilling has been done historically on the Golden Baie project, with most of that being shallow drilling done in the 1980s along a small portion of the 95 kilometers of potential strike on the property.  In other words, Golden Baie has tremendous discovery potential, both along strike and at depth.  Much of the property has seen little or no exploration and even a short exploration program conducted by the company in 2020 has already demonstrated the potential for new discoveries.

In December 2020, the company announced new assay results confirming high-grade gold mineralization at the Blow Out target on the Golden Baie property, located to the north of the Kendell Showing where visible gold was discovered in 2019. New grab samples from the Blow Out target contained grades up to 36.14 g/t gold and expanded the Blow Out target from 325 meters to a potential strike length of approximately 1 kilometer. 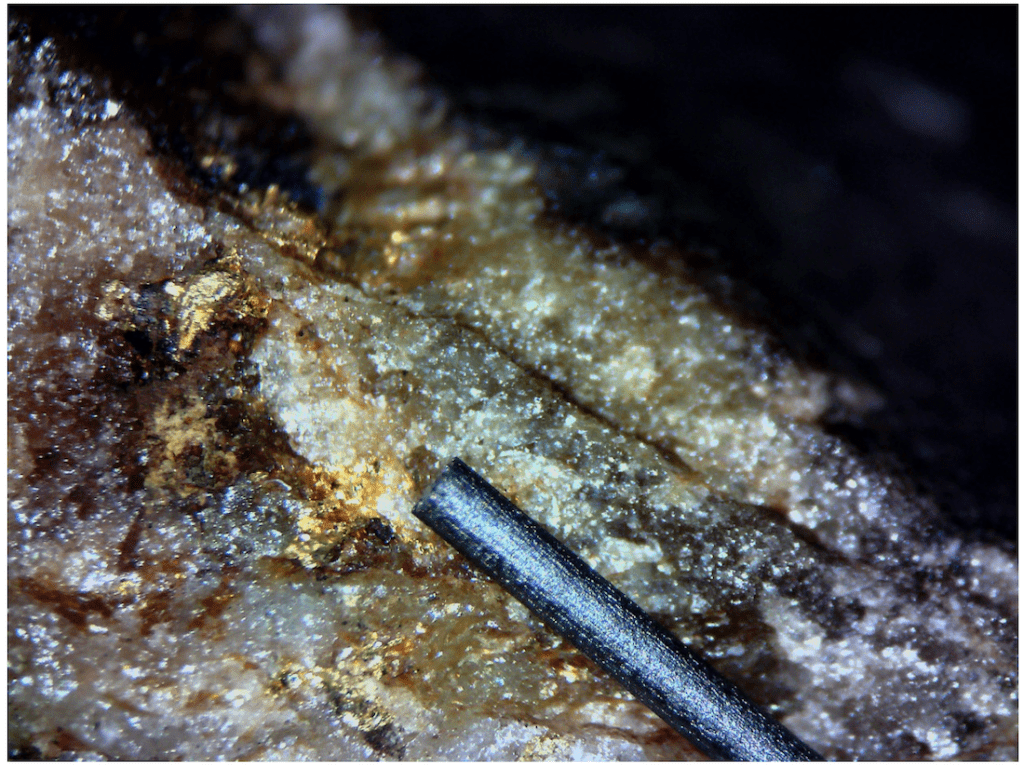 Visible gold in quartz from the Golden Baie Kendell Showing

In late December 2020, Canstar announced the closing of a C$1.3 million flow-through financing. The company intends to use this financing to incur Canadian exploration expenses in 2021 that will include drilling on multiple gold targets on the Golden Baie project.

The Canstar Resources’ management team and board of directors are seasoned veterans of the Canadian exploration sector with a history of success. Directors include Dr. David Palmer who was key in the success of Probe Mines, which was acquired by Goldcorp in 2015 for $526 million.  The company’s recently hired CEO, Robert Bruggeman, played a key role in the turnaround and recapitalization of AbraPlata Resource Corp. (TSXV:ABRA), increasing the market cap from $5 million in 2019 to over $200 million today.  Canstar has a good ownership structure with management and insiders controlling approximately half of the shares.

Canstar has option agreements to acquire 100% of the Golden Baie land package, which covers over 62,000 hectares along a major gold-bearing structure. With limited exploration and known high-grade mineralization in many areas that have seen historic exploration work, this flagship gold exploration project demonstrates a tremendous opportunity for new discovery.

Located within the Coast of Bays region of south-central Newfoundland, the Golden Baie project site is well positioned with good access, straight forward permitting, and prospectivity for high-grade orogenic gold mineralization dating back to the crustal scale tectonic activity that created the island of Newfoundland. 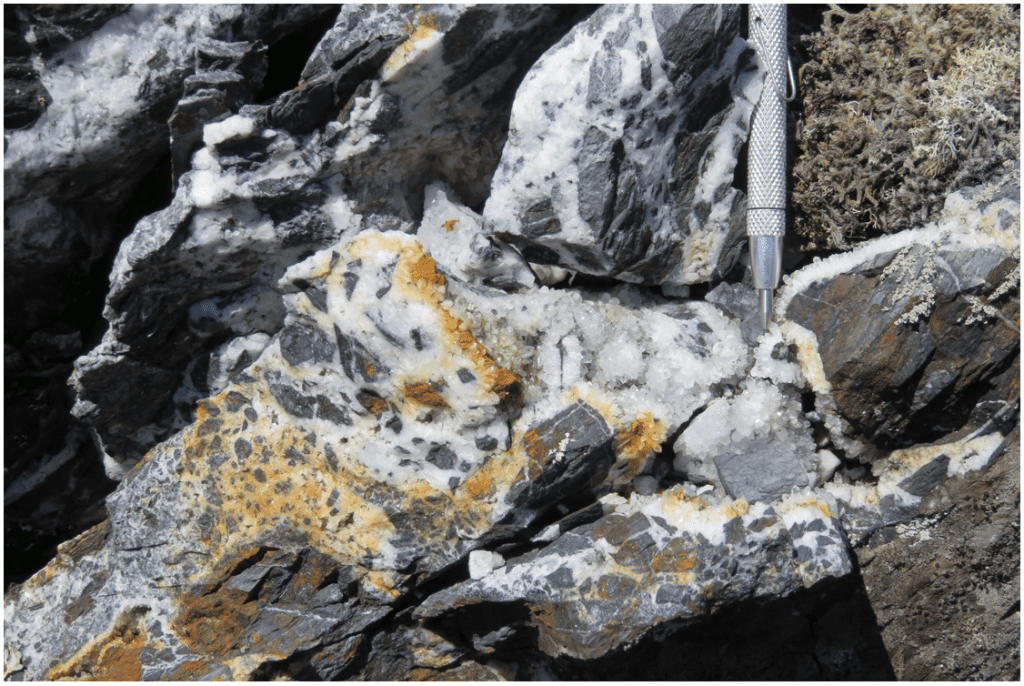 The past year’s exploration program highlighted samples grading up to 4,485 g/t gold, with many float samples running grades of 30 g/t gold. The orogenic gold mineralization includes disseminated gold in the form of specks within its broad quartz veins, in association with other minerals like antimony. These characteristics are remarkably similar to the mineralization found at New Found Gold’s Queensway project, located to the north in Newfoundland, and also in the high-grade Swan zone at Kirkland Lake Gold’s Fosterville deposit in Australia.

The Buchans-Mary March project sits within the same geographical group that hosts the past-producing Buchans mine in Newfoundland. Mineral deposits in this region have historically ranked as some of the world’s highest grade polymetallic VMS deposits, including zinc, iron, copper, gold and silver. With limited exploration compared to other VMS projects, Canstar has a large and attractive land position with this key project.

In 2020, Canstar examined core samples and mapping that revealed a high-grade copper-gold occurrence near the historic Mary March discovery hole from the previous year. At near-surface level, approximately 12.2 g/t gold, 660 g/t silver and 16.8 percent zinc were discovered in one drill hole. These noteworthy figures have received attention from investors as Canstar continues to explore more of this prospective property.

This project was acquired through RTO transactions with Altius Minerals (TSXV: ADZN) in August 2018. The land package comprises 100 percent interest in two licenses containing 360 claims, and it spans approximately 9,000 hectares. The project site is also advantageously positioned directly next to the past-producing Daniel’s Harbour zinc mine.

Limited exploration on this property presents Canstar Resources with tremendous opportunity for the discovery of Mississippi Valley-type (MVT) mineralization with structural and stratigraphic controls.

Robert Bruggeman has over 20 years of experience in corporate development, equity research and institutional sales and trading. He has a deep understanding of Canadian equity markets and the mining sector, having worked as a sell-side research analyst, desk analyst on the proprietary trading desk at TD Securities and head of the sales and trading desk at a boutique brokerage firm in Toronto. Bruggeman is also Chairman of the Board of AbraPlata Resource Corp., a TSX-Venture listed company focused on silver-gold exploration in Argentina. Bruggeman is a licensed Professional Engineer (Ontario) and a CFA charter holder.

Sam Leung is a mining professional with 15 years of international mining sector experience in due diligence, mergers and acquisitions and strategic evaluation of projects and operations. Since its IPO in 2017, Leung has been Vice President of Corporate Development for Adventus Mining Corporation. Leung is also a non-executive director of AbraPlata Resource Corp. Before Adventus, Leung was Director of Corporate Development at Lundin Mining Corporation. Here, he was a member of a small team that executed several successful transactions valued at over US$3.7 billion. Leung was also responsible for joint-venture related activities with Freeport-McMoran Inc. in Africa and Europe and strategic assignments at Lundin Mining’s operations in Europe and the Americas.

Before Lundin Mining, Leung served a global range of mining, financial and governmental clients as a due diligence and strategy consultant for Hatch Ltd.’s advisory practice based in London and Toronto. Leung began his career as a metallurgist and is a licensed professional engineer (Canada). Leung has a B.A.Sc. degree in Engineering Chemistry from Queen’s University at Kingston, Canada, with first-class honors.

Dr. David Palmer has over 25 years of management, technical and exploration experience in the Canadian and international mining industry. Dr. Palmer was the President and CEO of Probe Mines from 2003 to 2015. He led his team to two successful significant mineral discoveries, including the multimillion ounce Borden Gold deposit, and he led the sale of the company to Goldcorp Inc. in 2015. As recognition of his team’s accomplishments at Probe Mines, he was the recipient of numerous awards, including the PDAC’s Bill Dennis Prospector of the Year (2015) and Northern Miner’s Mining Person of the Year (2014). Dr. Palmer holds a B.Sc. (Geology) degree from St. Francis Xavier University, M.Sc. and Ph.D. (Economic Geology) degrees from McGill University. He is a member of the Association of Professional Geoscientists of Ontario.

A director of Probe Mines Limited from 2001 until its acquisition by Goldcorp in 2015, Peterson has 25 years of experience as a corporate securities lawyer specializing in corporate finance matters for small-cap companies. Most of Peterson’s practice focuses on junior natural resource companies. He has extensive experience with all aspects of prospectus financing, private placements and mergers and acquisitions in the junior public markets. Companies he has worked with are listed on the Toronto Stock Exchange and the TSX Venture Exchange.

Patrick Reid is a long-term member of the Ontario Mining Association, serving as Executive Director and recently retired as its President and CEO. From 1967 to 1984, Reid served as the MPP for the riding of Rainy River, Ontario, and he held various senior positions both within government and opposition. He was awarded the CIMM fellowship in 2001 for his outstanding contribution to the Canadian mining industry and the CIMM.

John E. Hurley, as one of the founding partners of McGovern, Hurley, Cunningham LLP, Toronto in 1980, worked on the initial TSX public offerings of such resource companies as Pangea Goldfields Inc. (acquired by Barrick Gold Corporation), Aurelian Resources Inc. (acquired by Kinross Gold Corporation), Detour Gold Corporation, Fronteer Gold Inc. and Labrador Iron Mines Holdings Limited, to name a few. Hurley graduated from Ryerson Polytechnical Institute (now Ryerson University) in Business Administration with a finance and accounting major. Hurley obtained his US CPA from the University of Illinois and his Canadian CA from the Ontario Institute of Chartered Accountants while articling with Price Waterhouse Co. in Toronto. Hurley retired from public practice in 2010.

The information contained here is for information purposes only and is not to be construed as an offer or solicitation for the sale or purchase of securities. Readers should conduct their own research for all information publicly available concerning the company. Prior to making any investment decision, it is recommended that readers consult directly with Canstar Resources and seek advice from a qualified investment advisor.