This Black Iron Inc. profile is part of a paid investor education campaign.*

Black Iron Inc. (TSX:BKI,OTC:BKIRF,FWB:BIN) is developing an iron ore mine in Ukraine ranked by market intelligence group CRU as having the lowest projected operating costs and second-lowest capital intensity of all iron ore pellet feed development projects in their database. The company has access to a highly-skilled labor force and excellent infrastructure which could help reduce the overall capital costs of the project. Black Iron has signed a memorandum of understanding with Glencore (LSE:GLEN) to engage in formal negotiations to finance the construction of the Shymanivske iron ore project in exchange for potentially securing the offtake of up to four million tonnes.

Black Iron’s 100 percent owned Shymanivske iron ore project is located in Kryviy Rih, Ukraine, 330 kilometers southeast of Kiev and 450 kilometers west from the conflict in the Donbass. Black Iron is confident that the conflict won’t pose a threat to the project as the front line has not moved in over five years and there are no benefits for Russia to push deeper into the country since it has secured the naval base on the island of Crimea. Ukraine is the seventh-largest producer of iron ore globally and is strategically located between markets of Europe, Russia, Asia and the Middle East.

Ukraine’s newly elected government has made moves to eliminate corruption at all levels and continues to improve its ranking. According to the World Banks’ “Ease of Doing Business Index” for 2020, the Ukraine is ranked 64 out of 190 countries. The country has also moved towards closer European integration with the signing of the “Ukraine-European Union Association Agreement” in June 2014. These initiatives are bringing economic and geopolitical stability to the country, making it an attractive mining jurisdiction, according to the World Bank. Black Iron’s senior management has good relationships with Ukraine’s new government and recently met with the President, Prime Minister and several other important ministers, who are highly supportive of the project.

The first phase of development is expected to produce 4 million tonnes of ultra-high-grade 68 percent iron concentrate per year before expanding to 8 million tonnes per year in the fifth year of production. The project also boasts encouraging economics such as an after-tax NPV of US$1.7 billion and an IRR of 36 percent based on a conservative long-term iron ore price of US$62 per tonne for 62 percent iron product. The iron produced from the Shymanivske deposit can be concentrated to a 68 percent purity with very low impurities, making it ideal for the production of more environmentally sustainable high-grade steel. The higher the iron content, the lower the greenhouse gas emissions generated in the production of steel.

Black Iron is currently in the process of obtaining the surface rights for its mine, refinery and tailings facilities. The company is also in the process of securing offtake agreements and financial partners to help fund the development of the mine with the aim of being in production by 2023. To date, Black Iron has signed a non-binding offtake agreement with Glencore, in exchange for an investment into project construction, for the full phase one planned annual production of 4 million tonnes. The company is currently in advanced discussions with other interested parties to secure the balance of funding required for project construction.

Black Iron is led by an experienced management team and board with a history of developing iron ore deposits for companies like Rio Tinto (ASX:RIO,LSE:RIO,NYSE:RIO) and Consolidated Thompson Iron Mines Limited. Notable members of the team include CEO Matt Simpson, who has worked for Rio Tinto and Hatch Ltd. and was in charge of designing, constructing and operating large mines. Chairman Bruce Humphrey, who is the former Chairman of Consolidated Thompson iron ore and COO of Goldcorp. Lending additional credibility to the future importance of the project is Director Pierre Pettigrew, the former Canadian Minister for Foreign Affairs and International Trade.

The Shymanivske iron ore deposit is strategically well-positioned in Ukraine between markets in Europe, Asia and the Middle East. The project is located 330 kilometers southeast from Ukraine’s capital Kiev, in the heart of the KrivBass iron ore mining district. The property is located in the southern half of the KrivBass district and is surrounded by two open-pit iron ore mines owned by ArcelorMittal (NYSE:MT), Metinvest and Evraz Steel. There are currently seven operating open-pit iron ore mines in the district located within 40 kilometers of Black Iron’s Shymanivske deposit. 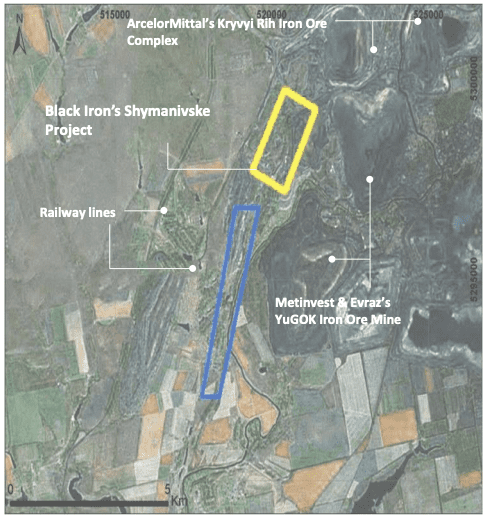 In December 2017, Black Iron released a re-scoped PEA for its Shymanivske project. The report is based on a two-phased build-out of the mine and production plant. The first phase of the operation is expected to produce 4 million tonnes of ultra-high-grade 68 percent iron concentrate per year before expanding to 8 million tonnes per year in the fifth year of production. Phasing the build is expected to significantly reduce the up-front construction costs and time.

Black Iron plans to update the 2017 PEA in the near term as the company pushes the project towards production. 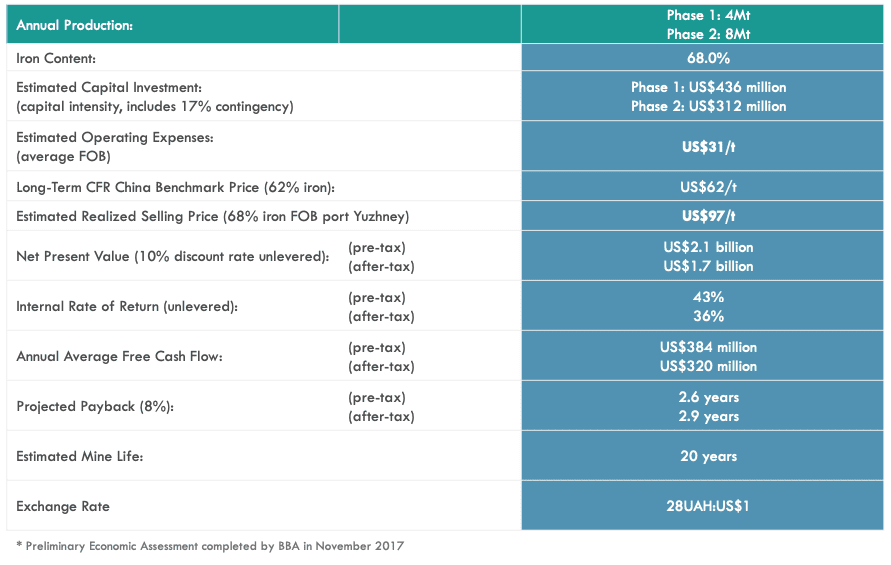 The Shymanivske deposit is a banded-iron formation that primarily consists of magnetite with hematite. The iron band thickness of the deposit ranges between 40 meters and 80 meters with an overburden up to 21.2 meters and a low strip ratio of 0.6:1. The ore body is low in phosphorus, manganese and aluminum. 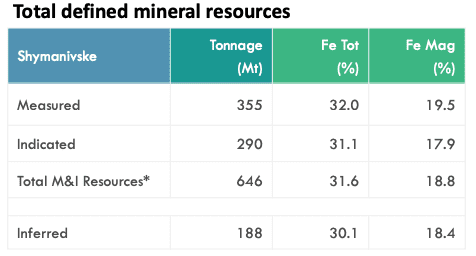 Ground gravity and magnetic surveys show the potential for an expansion of iron ore mineralization at the north end of the property. This area has not yet been drill tested and is not included in the current resource estimate. Black Iron plans to complete a future drill program at this site with the aim of expanding the resource from its current 20 years of mine life.

Black Iron needs to secure US$436 million to fund phase one of construction out of which $175 million (40 percent) is expected to be equity and $260 million (60 percent) debt. The company has strong interest from a number of steel mills and large trading companies, including Glencore, to fund the bulk of the equity required for project construction in exchange for securing product offtake. Commercial discussions have commenced with these groups.

To date, Black Iron has signed a non-binding MOU with a subsidiary of Glencore. Under the terms of the agreement, Glencore may make an investment to help fund the construction of the project in exchange for securing up to the full phase one planned annual production of 4 million tonnes. The agreement also outlines cooperation between the two companies to balance the funds required to construct the project.

Expressions of interest to provide the $260 million of debt for construction are currently being received mainly from European-based banks and export credit agencies that are intrigued by the project’s robust economics. The funds potentially provided by Glencore and others are expected to go towards acquiring the required surface rights among other project construction-related expenses.

In addition to securing project construction funding, Black Iron also needs to secure the surface rights for its mine, refinery and tailings facilities, which are owned by various agencies in Ukraine’s government. The company expects to first sign a MOU on the transfer of this land and then move to a binding contract in early 2020. From there, Black Iron plans to pursue its construction and operating approvals as it builds out its mine infrastructure. 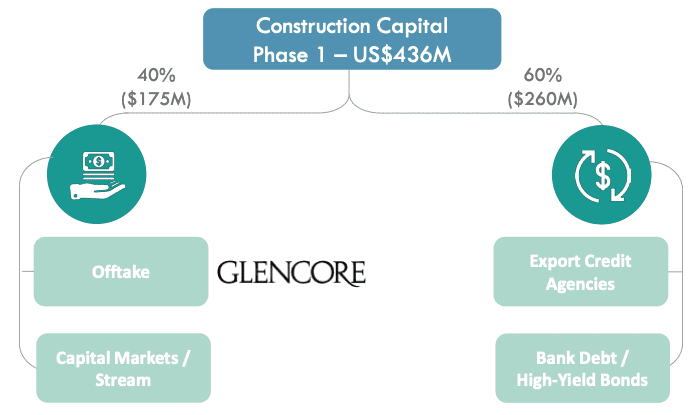 Matt Simpson is the former General Manager of Mining for Rio Tinto’s Iron Ore Company of Canada, where he managed a team of over 620 people and multi-hundred million dollar per year budget. He has also worked for Hatch where he designed and constructed global metallurgical refineries.

Les Kwasik has over 40 years of hands-on experience in building and operating mines globally with companies such as INCO (Vale) and Xstrata Colombia. He has constructed nine mines over his career including two in the former Soviet Union.

Paul Bozoki is the former CFO of CD Capital Partners, operating in the Soviet Union and Ukraine.

Ivan Markovich has an extensive network of Ukraine government relationships.

Dave Porter is the former VP of Rio Tinto’s Iron Ore Company of Canada and COO of Algoma Street.

Pierre Pettigrew is the former Canadian Minister for Foreign Affairs and International Trade.

The information contained here is for information purposes only and is not to be construed as an offer or solicitation for the sale or purchase of securities. Readers should conduct their own research for all information publicly available concerning the company. Prior to making any investment decision, it is recommended that readers consult directly with Black Iron Inc. and seek advice from a qualified investment advisor.