Ionic Rare Earths Limited (“IonicRE” or “the Company”) (ASX: IXR) is pleased to advise that the Phase 4 infill drill campaign has been completed ahead of schedule at the Makuutu Rare Earths Project (“Makuutu”) in Uganda.

Makuutu has been confirmed as one of the world’s largest ionic adsorption clay (IAC) hosted rare earth element (REE) deposits, located 120 km east of Kampala in Uganda. The Phase 4 drill program has targeted a near conversion of previously classified Inferred resources across the Makuutu central and eastern zones and is now targeting a reclassification of Measured and Indicated resources in excess of 250 million tonnes as part of the planned Mineral Resource Estimate (MRE), to be updated in late Q1 2022. A significant increase in the MRE classification will form the next planned milestones for the Project in order to move towards completion of a Feasibility Study, including supporting activities, which will enable the submission of a Mining Licence Application (MLA) in the second half of 2022.

Additionally, the Company has received advice from the Directorate of Geological Survey and Mines (DGSM) in Uganda that the Exploration Licence application TN03573, shown in Figure 1, has been approved for granting. The addition of this exploration licence will increase the overall exploration tenement area at Makuutu to approximately 300 square kilometres, including a 37 kilometers long mineralisation trend confirmed as part of the drilling results released in July 2021 (Refer ASX announcements 14th and 20th July).

Ionic Rare Earths Managing Director Mr. Tim Harrison commented: “The completion of the Phase 4 drill program at Makuutu represents another significant milestone achieved as we rapidly move Makuutu from exploration to a critical and heavy rare earth operation. This drilling program is crucial to increasing the MRE at Makuutu and will underpin a material increase in the measured and indicated resource base that supports the Feasibility Study.”

The Phase 4 program had prioritised drilling at the previously classified resources across RL 1693 to enable a reclassification to Indicated and Measured category. The drill program was also aimed at converting RL 1693 Exploration Targets to classified resources. The program was expanded to include infill drilling to increase classification confidence on the newly awarded RL00234 (previously EL 1766). These higher classified resources will then be used to underpin the Makuutu Feasibility Study. The Phase 4 drill program is illustrated in both Figure 1 and Figure 2, targeting the following areas; Areas C, E, Central Zone, Central Eastern Zone, F, G, H and I. Cumulatively this represents nearly 90% of the existing MRE at Makuutu, as outlined within Table 2. 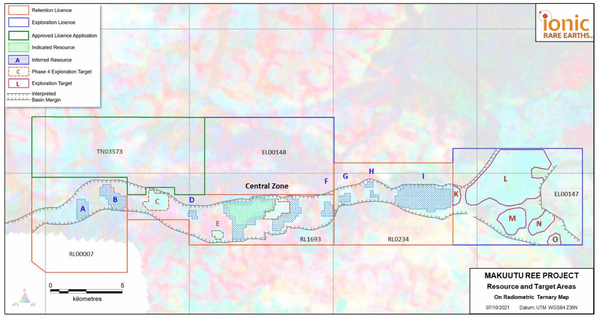