The Klein Law Firm Reminds Investors of Class Actions on Behalf of Shareholders of LCID, IBM and AUPH

The Klein Law Firm announces that class action complaints have been filed on behalf of shareholders of the following companies. There is no cost to participate in the suit. If you suffered a loss, you have until the lead plaintiff deadline to request that the court appoint you as lead plaintiff

Lucid Group, Inc. (NASDAQ:LCID)
This lawsuit is on behalf of a class of all persons and entities who purchased or otherwise acquired Lucid common stock between November 15, 2021, and February 28, 2022, inclusive.
Lead Plaintiff Deadline: May 31, 2022

The filed complaint alleges that defendants made materially false and/or misleading statements and failed to disclose material adverse facts about Lucid's business and operations. Specifically, the Company overstated its production capabilities while concealing that "extraordinary supply chain and logistics challenges" were hampering Lucid's operations. As a result of the defendants' wrongful acts and omissions, and the significant decline in the market value of Lucid's common stock, Lucid investors have suffered significant damages.

Learn about your recoverable losses in LCID: https://www.kleinstocklaw.com/pslra-1/lucid-group-inc-loss-submission-form?id=27730&from=1

Learn about your recoverable losses in IBM: https://www.kleinstocklaw.com/pslra-1/international-business-machines-corporation-loss-submission-form?id=27730&from=1

The AUPH lawsuit alleges Aurinia Pharmaceuticals Inc. made materially false and/or misleading statements and/or failed to disclose during the class period that: (i) Aurinia was experiencing declining revenues; (ii) Aurinia's 2022 sales outlook for the Company's only product which it offers for the treatment of adult patients with active lupus nephritis, LUPKYNIS, would fall well short of expectations; (iii) accordingly, the Company had significantly overstated LUPKYNIS's commercial prospects; (iv) as a result, the Company had overstated its financial position and/or prospects for 2022; and (v) as a result, the Company's public statements were materially false and misleading at all relevant times.

Learn about your recoverable losses in AUPH: https://www.kleinstocklaw.com/pslra-1/aurinia-pharmaceuticals-inc-loss-submission-form?id=27730&from=1 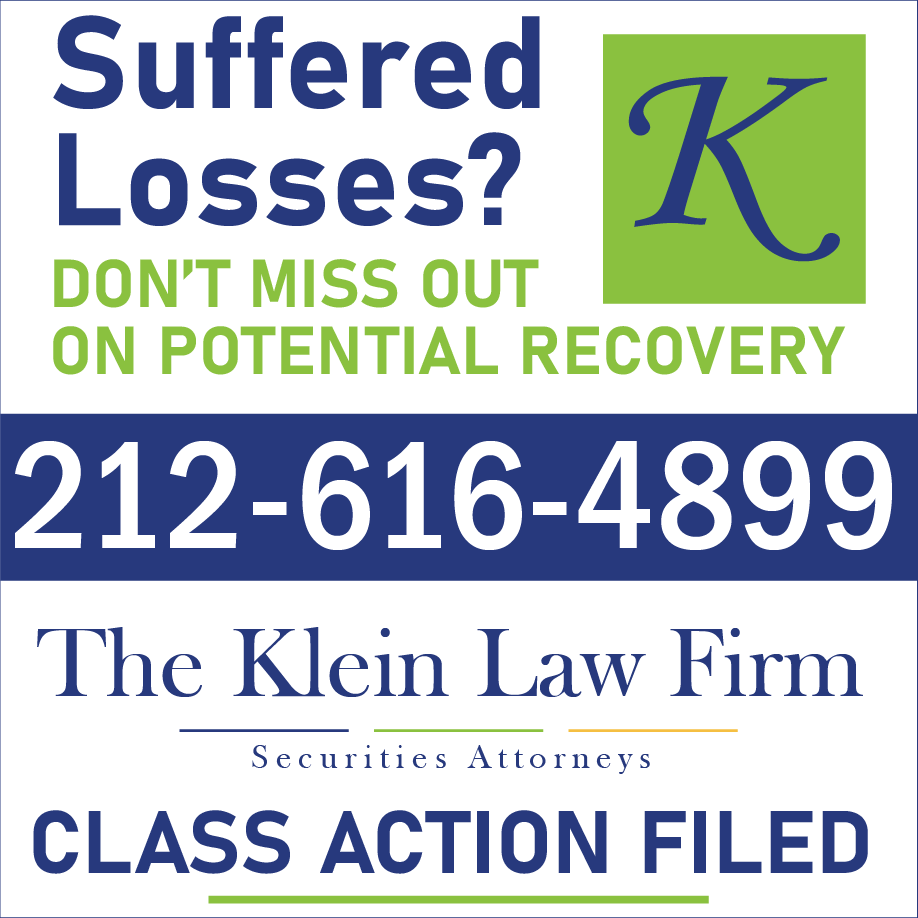 Your ability to share in any recovery doesn't require that you serve as a lead plaintiff. If you suffered a loss during the class period and wish to obtain additional information, please contact J. Klein, Esq. by telephone at 212-616-4899 or visit the webpages provided.

BriaCell Therapeutics Corp. (Nasdaq: BCTX, BCTXW) (TSX: BCT) ("BriaCell" or the "Company") a clinical-stage biotechnology company specializing in targeted immunotherapies for cancer, is pleased to announce the publication of novel scientific data and clinical data (previously reported) on BriaCell's lead candidate, Bria-IMT™. The abstract of the paper was published on-line in Recent Patents on Anti-Cancer Drug Discovery a publication focused on research (where patents have been registered) in leading therapeutic areas, targets, and agents related to anti-cancer drug discovery. The publication highlights BriaCell's approach to developing novel cellular immunotherapies for cancer and the safety and efficacy of Bria-IMT™ against advanced breast cancer in a prior clinical study through a potentially unique mechanism of action. The full text of the article will be made available.

"We are thrilled to see the congruence of our scientific insights and the clinical activity of our immunotherapy in advanced breast cancer patients," stated Dr. Williams, BriaCell's President & CEO. "This paper highlights our findings of rapid tumor shrinkage in multiple anatomic locations including difficult to treat sites like the brain. We are even more excited to see the potential positive effect on survival in these patients. Having these scientific and clinical findings published in such a highly regarded journal is a significant achievement for BriaCell. The results support our approach for selecting patients most likely to benefit from our immunotherapy. This undergirds our current strategy of building a pipeline of off-the-shelf personalized immunotherapies as potentially safe and effective treatments for advanced breast cancer and other cancers," Dr. Williams added.

– If Authorized, Lenacapavir Could Offer a New, Every Six-Month Treatment Option for People with Limited Treatment Choices –

The board of directors of ABBVie Inc. (NYSE: ABBV) today declared a quarterly cash dividend of $1.41 per share.