Grid Metals Corp. is pleased to announce the further drilling results from its fall 2020 program at its 100% owned East Bull Lake palladium property in Ontario. The first step out hole from discovery hole EBL20-13 is located 85 metres away. It intercepted both significant widths of palladium-dominant disseminated sulfide mineralization and a four metre section of nickel-rich semi-massive sulfide and magnetite …

The Company resumed drilling on the Property on January 21st and is expected to initially complete up to 4,000 metres of drilling over the next 2-3 months, including several new holes at both the Central Parisien Lake target area (Figure 1) and the southwestern part of the East Lobe target area (an area located approximately 6 kilometres to the east). In both areas, drilling will be designed to delineate laterally extensive and thick (i.e., tens of metres) zones of near surface, high tenor, Pd- and Cu-rich disseminated sulfide mineralization, especially within modeled structural depressions along the base of the intrusion. Drilling will also test for additional Ni-rich mineralization, similar to that observed in the Parisien Lake area, by targeting selected conductivity and resistivity anomalies within the lower parts of these structural depressions or along the margins of potential feeder structures.

Dr. Dave Peck, the Company’s Vice-President of Exploration and Business Development stated “The intersection of nickel-rich sulfide mineralization is a significant new development for the project. The position of this mineralization at the base of the intrusion fits the pattern observed for sulfide deposition in many layered intrusions globally, with Pd- and Cu-rich disseminated sulfide mineralization developed above denser nickel- and iron-rich sulfides occupying structural depressions along the basal contact and commonly extending into the immediate footwall. The 2020 exploration results support the Company’s belief that major deposits of Pd- and Cu-rich disseminated sulfide mineralization – locally underlain by high-value, base metal-rich semi-massive to massive sulfide-oxide mineralization, can be discovered in the Central Parisien Lake area and elsewhere within the prospective lower stratigraphy of the East Bull Lake Intrusion.“

Analytical results for EBL20-12 and EBL20-15 were also received (Table 1). These two holes were drilled to the south to intersect the contact area between the Parisien Lake Deformation Zone (PLDZ) in the south – a potential feeder structure to the EBL Intrusion, and the upper part of the prospective Lower Series stratigraphy in the north (Figures 1 to 3). In contrast, EBL20-13 and 14, both of which returned better grade-thickness palladium mineralization, were drilled to the north toward the central axis of a modeled basin structure along the base of the intrusion.

Anomalous Pd mineralization was encountered in both EBL20-12 and EBL20-15 within the prospective Lower Series units with maximum grade-thickness intervals as follows:

Technical Interpretation
The geology observed in the 2020 and historical drill holes in the Central Parisien Lake target area suggests the existence of an arcuate-trending basin-shaped structure along the base of the EBL intrusion directly north of the PLDZ (see Figures 1-3). This basin is interpreted to represent a primary structural deposition site for dense sulfide liquid derived from laterally flowing magma, possibly sourced from the PLDZ feeder. The systematic vertical trend in total sulfide content and palladium and base metals grades observed in hole EBL20-14 is interpreted to reflect flow- and gravity-induced separation of lower density, high tenor Pd- and Cu-rich sulfides in the Lower Series from higher density and lower Pd tenor Fe- and Ni-enriched sulfides and magnetite in the Marginal Series. If correct it follows that some of the conductor anomalies identified in the area (Figure 1) could be related to the same style of Ni-rich sulfide-oxide mineralization that was intersected in hole EBL20-14.

The pattern of sulfide distribution noted in EBL201-14 indicates that it was deposited from a single, major magma pulse flowing laterally away from a deeper feeder structure. This interpretation is supported by 3D geophysical and geological modeling and new whole-rock geochemical data. The latter show a systematic downward progression from higher tenor copper- and palladium-rich disseminated sulfides in the upper half of the mineralized section (Lower Series = Anorthosite Zone and Inclusion-bearing Zone) to lower tenor disseminated to locally semi-massive, nickel- and copper-rich sulfide + magnetite mineralization in the lower half of the section (Marginal Series = Gabbronorite Zone and Border Zone). This pattern is encouraging because similar vertical zonation patterns exist in many of the world’s major magmatic nickel-copper-PGE sulfide deposits. It bodes well for the discovery of both thick and laterally continuous zones of palladium-rich disseminated sulfide mineralization and more localized structurally-controlled semi-massive to massive sulfide-oxide mineralization on the Property.

Grid Metals applies best practice quality assurance and quality control (“QAQC”) protocols on all of its exploration programs. For the current drilling program, core is logged and sampled at a core facility located in the town of Massey, Ontario – approximately 30 km south of the property. NQ-size drill core samples are cut into halves using a diamond saw. Standard sample intervals of 1.00 metre length are used unless a major geological, structural or mineralization boundary is encountered. Samples are bagged and tagged and transported by courier to, for this news release, the Actlabs Thunder Bay analytical facility. Actlabs analyzes each sample for Pd, Pt and Au using a lead collection fire assay on a 30 g pulp split and an ICP-OES finish. Copper, Ni and Co are analyzed using a ‘near total’ fusion multi-acid digestion and an ICP-OES finish. The Company uses two PGE certified reference materials (“CRMs”) and one analytical blank purchased from Canadian Resource Laboratories to monitor analytical accuracy and check for cross contamination between samples. One of the CRMs or the blank are inserted every tenth sample within a given batch. The analytical results for the two CRMs and the blank for the sample batches reported here did not show any significant bias compared to the certified values and the results fell within the acceptable limits of variability.

About Grid Metals Corp.
Grid Metals Corp. is an exploration and development Company that has a diversified portfolio of projects in the nickel-copper-platinum group metal sectors. These commodities are vital to the emerging battery metals, energy storage and automotive sectors. All of Grid’s projects are located in secure North American mining jurisdictions. The Company is focused on timely advancement of its property portfolio through prudent exploration and development activities.

We seek safe harbour.
This news release contains forward-looking statements within the meaning of the United States Private Securities Litigation Reform Act of 1995 and forward-looking information within the meaning of the Securities Act (Ontario) (together, “forward-looking statements”). Such forward-looking statements may include the Company’s plans for its properties, the overall economic potential of its properties, the availability of adequate financing and involve known and unknown risks, uncertainties and other factors which may cause the actual results, performance or achievements expressed or implied by such forward- looking statements to be materially different. Such factors include, among others, risks and uncertainties relating to potential political risk, uncertainty of production and capital costs estimates and the potential for unexpected costs and expenses, physical risks inherent in mining operations, metallurgical risk, currency fluctuations, fluctuations in the price of nickel, cobalt, copper and other metals, completion of economic evaluations, changes in project parameters as plans continue to be refined, the inability or failure to obtain adequate financing on a timely basis, and other risks and uncertainties, including those described in the Company’s Management Discussion and Analysis for the most recent financial period and Material Change Reports filed with the Canadian Securities Administrators and available at www.sedar.com.

Figure 1. Plan view map showing the location of 2020 drill holes in the Central Parisien Lake area with palladium assays and Pd Eq grades. Histograms on drill traces are linear scale of palladium grades exceeding 0.5 g/t with a maximum value of 3.7 g/t Pd in hole EBL20-13. “Oxide” label for lower, highlighted assay interval in EBL20-14 refers to oxide-rich semi-massive sulfide interval as documented in Table 1. Background image is the tilt derivative of the total magnetic field derived from the 2007 VTEM survey over the Property. 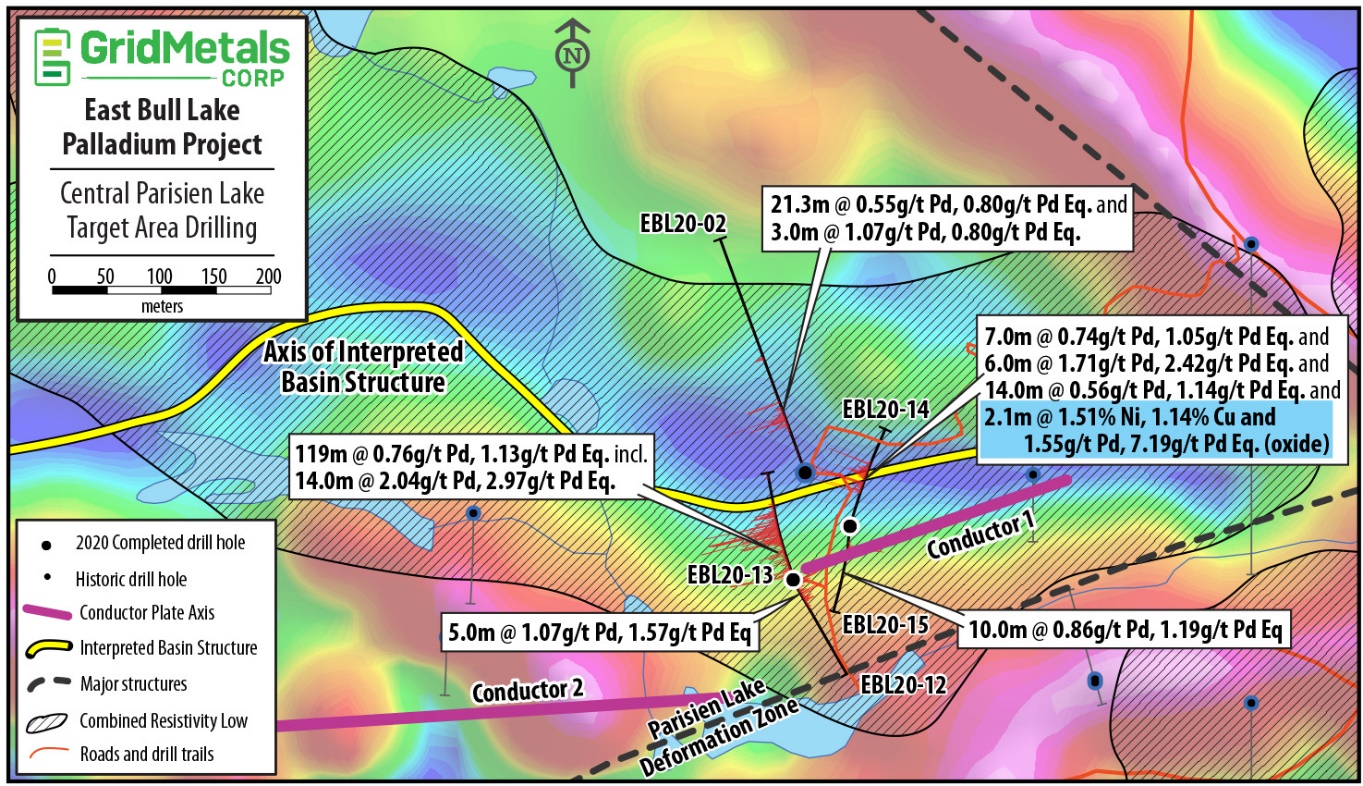 Figure 2. Vertical cross section showing the simplified geology and palladium grades encountered in holes EBL20-02, 12 and 13. Palladium grade histograms are plotted on a linear scale for samples with greater than 0.5 g/t Pd with a maximum value of 3.7 g/t from hole EBL20-13. The background image is a coloured inversion model of magnetic susceptibility generated from the 2007 VTEM survey over the Property. 3D geological and geochemical modeling suggest that minor normal vertical displacement may have occurred along the Parisien Lake deformation zone, as indicated on the section. 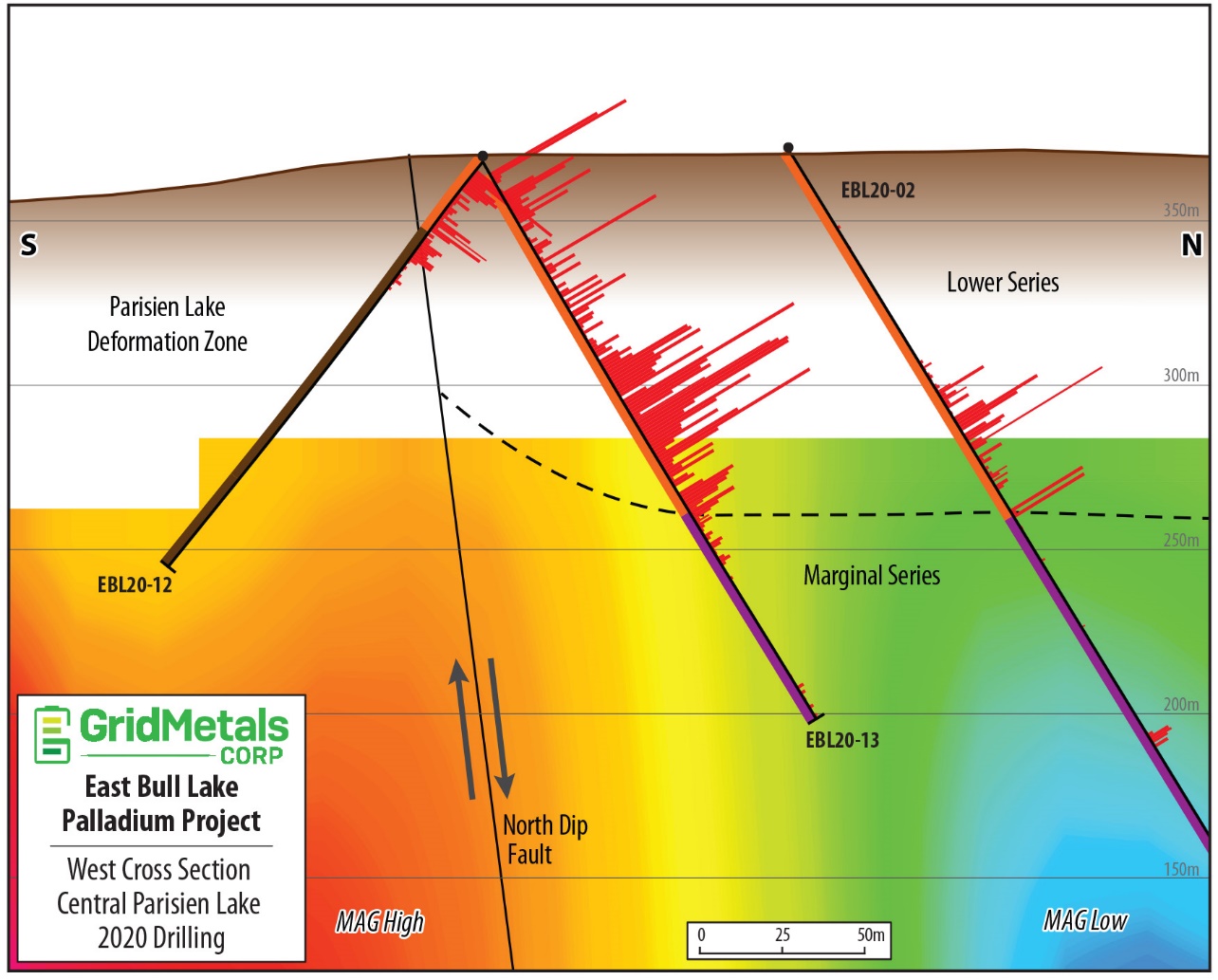 Figure 3. Vertical cross section showing the simplified geology and palladium grades encountered in holes EBL20-14 and 15. Palladium grade histograms are plotted on a linear scale for samples with greater than 0.5 g/t Pd with a maximum value of 2.8 g/t from hole EBL20-14. The background image is a coloured inversion model of magnetic susceptibility generated from the 2007 VTEM survey over the Property. 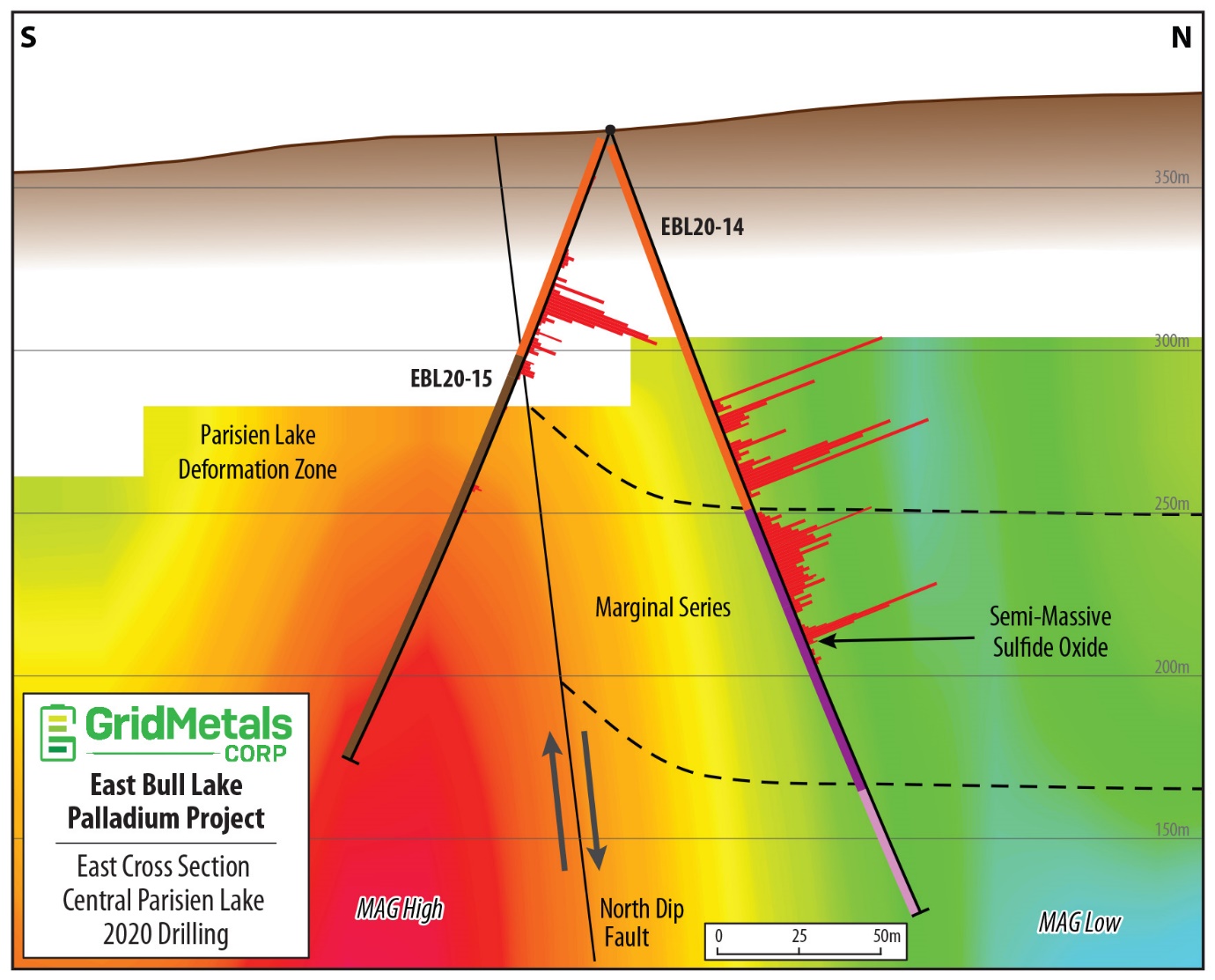